A federal judge has ruled that the government must pay landowners along the lower Missouri River for flooding their property to protect endangered species.

The final bill could reach into the hundreds of millions, according to a legal expert.

“This is a big deal,” said Anthony Schutz, an associate professor at the University of Nebraska College of Law. “The potential liability could be in the hundreds of millions of dollars depending upon how many people are included.”

Beyond the sticker shock of the potential price tag, the case could have broader effects, he said, ranging from higher costs to protect endangered species generally to more expensive infrastructure projects along the Missouri River locally.

“This throws a wrench into the adaptability of management of the (river) to changing needs,” Schutz said.

The reason? A judge with the U.S. Court of Federal Claims found that the U.S. Army Corps of Engineers had caused an increase in flooding when it made changes to improve habitat along the river as part of its effort to comply with the Endangered Species Act.

Furthermore, the corps did so without paying landowners for flooding their property, Senior Judge Nancy Firestone concluded. That is a violation of the Fifth Amendment to the U.S. Constitution, which prohibits taking property without compensation.

The federal government could appeal the decision, but neither the Corps of Engineers nor the U.S. Justice Department would comment.

The plaintiffs’ attorney, Dan Boulware of the Polsinelli law firm, said he expects the government to appeal the case and added that his firm “has always been willing to work out a reasonable settlement with the government, but without success.

“The government needs to step up and do what’s right,” he said.

U.S. senators from the four states along the lower river — Nebraska, Iowa, Missouri and Kansas — also are calling on the corps to settle the case and wrote the secretary of the Army last month urging such action.

“The corps continues to ignore clear liability for its actions and instead expresses its intent to exhaust all appeals for years to come,” the senators wrote. “We once again strongly urge that the corps cease further delay and make our constituents whole. ... It is unacceptable that some of our constituents have waited over 13 years to be compensated.”

More than 400 plaintiffs participated in the suit, and the Polsinelli law firm is researching whether the statue of limitations would allow other landowners to sign on.

Not all landowners along the river will qualify for payments. This case is unusual in that it is a mass-action lawsuit, not a class-action case. Thus, each individual plaintiff’s situation is judged separately.

In a test sample of 44 property owners, the judge concluded that about a third — 16 out of 44 — didn’t qualify for damages.

The case involved several years of flooding from 2007 to 2014. The judge has thrown out damages from 2011’s historic flood, and last year’s catastrophic flooding wasn’t included because it occurred after the case was brought.

The corps is involved in the Missouri River because it has been tasked by Congress with managing it. For more than a century, humans have worked to reshape the river so that it would be a more reliable route for commercial boat traffic and less prone to flooding.

In the middle of the last century, the federal government began to more systematically alter the river, by building large dams on its upper reach and shortening, deepening and narrowing its lower reach.

The judge noted in her ruling that as part of that effort, the government encouraged development along the river, and thus, property owners were given reasonable assurances that their land would be protected from flooding.

The lower reach of the river, from about Sioux City, Iowa, to St. Louis, is what’s at issue in this lawsuit. That part of the river has gone from being a meandering, multi-channel corridor to a constricted narrow and deep channel.

The corps has been trying in some areas along the lower river to re-create a somewhat more natural flow. Three species along the river — the pallid sturgeon fish and the piping plover and least tern birds — qualify for protection under the Endangered Species Act.

The judge ruled that the corps caused an average reduction in land values of about 25% along the river. Landowners are owed compensation, plus interest. The next step is for the corps and Polsinelli law firm to come back with a dollar figure for that amount.

Judge Firestone is not requiring the corps to pay for all damage to all property.

Her ruling stipulates that the corps must pay landowners for a “flowage easement,” a legal agreement that would set out yet-to-be determined terms for use of the land. The corps would still have to provide flood control.

Firestone said the corps does not have to pay for crop damage and damage to farm equipment and buildings such as homes and outbuildings. The plaintiffs’ attorneys could appeal this aspect of the ruling, and Boulware said they are weighing their options.

This week’s ruling was the second that Firestone has issued in the two-phase lawsuit. The first, in 2018, was that yes, the corps’ actions had contributed to flooding. This second phase, with the trial held this summer, was to quantify those damages.

The case is a vindication for the property owners, Boulware said.

“A lot of people said, ‘You can’t win this, the government is going to pull out all the stops.’ But we have won this,” he said. “I realize it’s not over, but we think we’re going to prevail.” 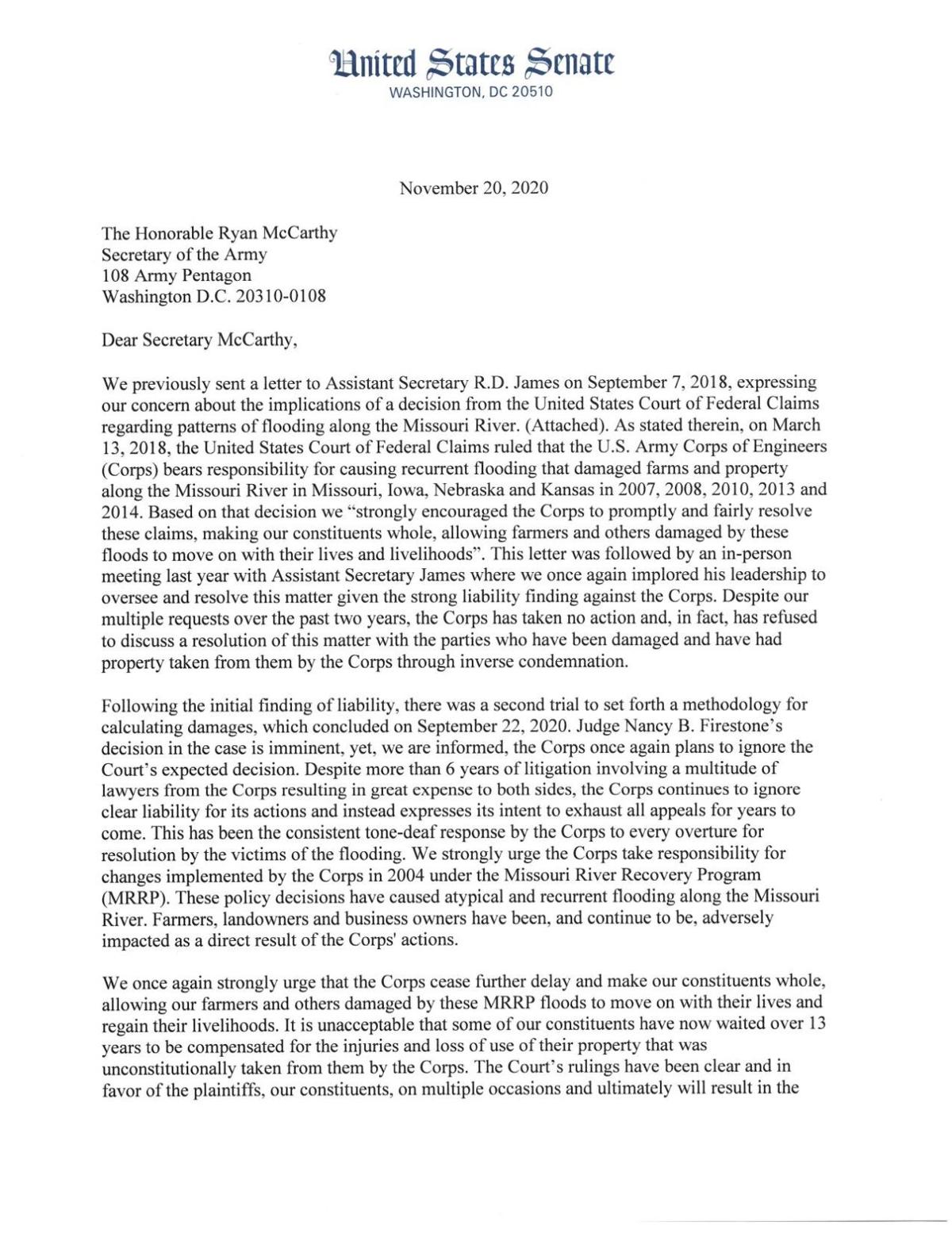 Corps of Engineers is liable for some Missouri flooding, judge rules

A federal judge has ruled that the U.S. Army Corps of Engineers is liable for some of the flooding that has occurred along the Missouri River since 2007.

Water managers want to assure U.S. Space Command leaders that Offutt will be safe from catastrophic floods. But are higher levees enough?

A new lawsuit lays the groundwork for landowners along the Missouri River who didn't join an earlier lawsuit to seek compensation from the federal government for damage caused by endangered species protections.