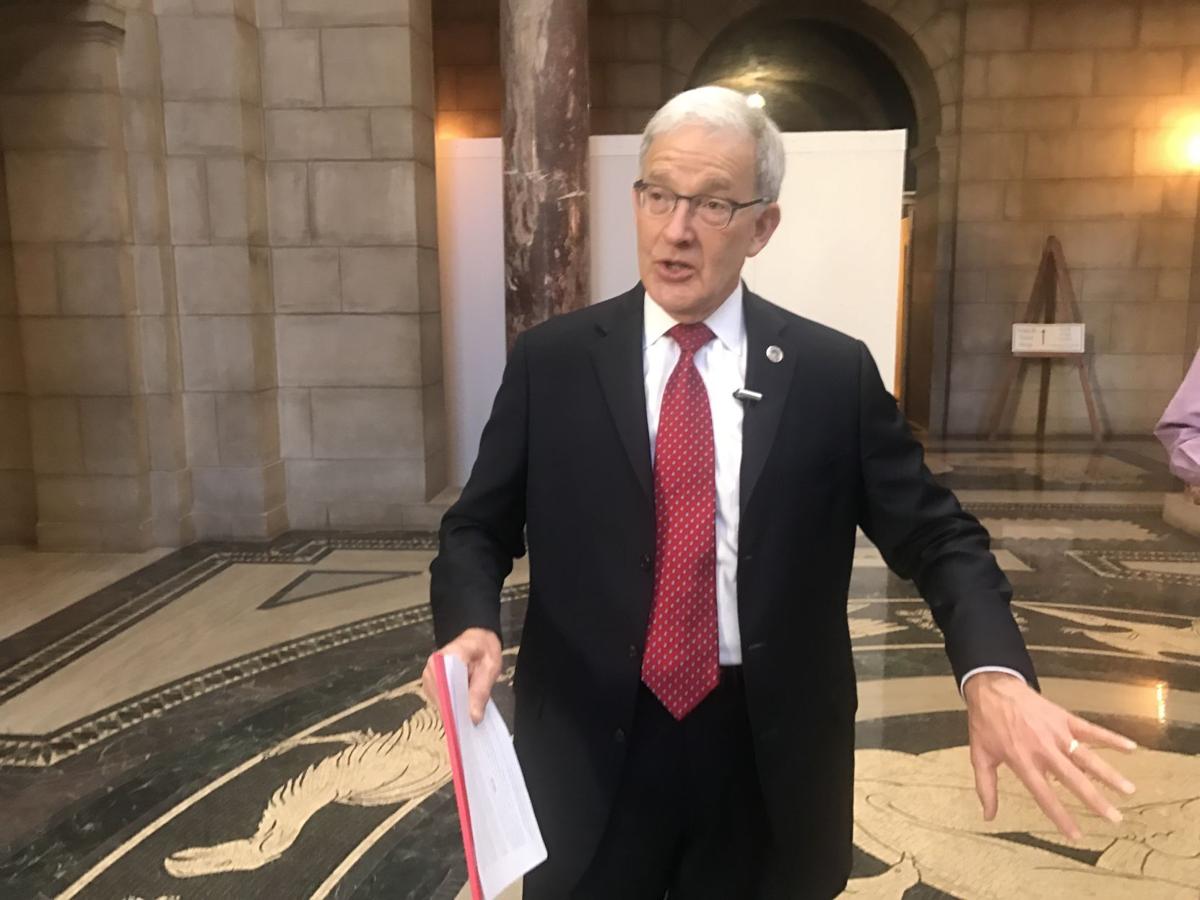 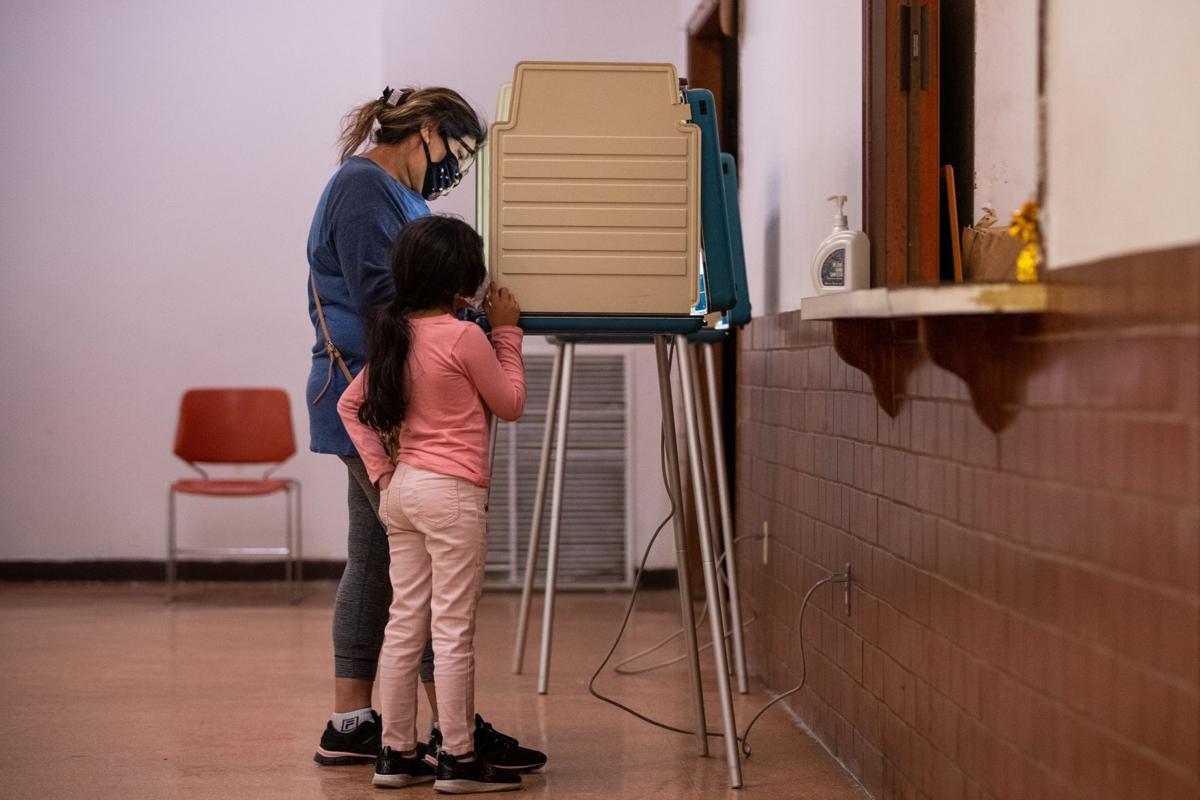 A voter with her daughter at Our Lady of Guadalupe in South Omaha. Four races in Nebraska met the threshold for an automatic recount. And two Sarpy legislative races were close enough to qualify for a recount at a candidate’s expense.

Turnout of more than 950,000 surpassed the previous record of 860,573, set in the general election four years ago, the Secretary of State’s Office said.

Evnen said that about 74% of Nebraska’s registered voters cast ballots in the 2020 general election, which concluded Tuesday. The record in that regard is 80.8% in the 1968 general election in which Richard Nixon defeated Hubert Humphrey.

In a press conference in the State Capitol, Evnen thanked county election officials and poll workers. He said there had been no reports of fraud.

“Things seemed to go quite smoothly,” he said. “We had a very smooth election.”

Thirty-four counties had turnout of more than 80% of registered voters, and three others — Blaine, Boone and Arthur — reported 88%. The overall turnout this fall was 936,106 including early voting, he said, but that will increase because 20,000 to 25,000 remain to be counted in Douglas, Sarpy and Platte Counties.

This year also set a voter registration record in Nebraska. About 1.27 million were registered, up from 1.22 million in 2018.

The office didn’t necessarily expect the uncounted ballots to change outcomes, but four races meet the automatic recount threshold. Recounts take place when the separation between candidates is 1% or less of the votes cast for the top vote-getter.

The four races include three involving natural resources districts and one race for the Nebraska Public Power District board.

In one of those — the race between Gary Aldridge and LeRoy Sievers for a seat on the board of the Lower Platte South Natural Resources District — Aldridge led by only two votes.

“So when Nebraskans hear me say, ‘Your vote counts,’ I really mean it,” Evnen said.

Separation in two legislative races falls between 1% and 2%, so a candidate can ask for a recount at his own expense. Carol Blood leads Rick Holdcroft slightly in District 3, and Jen Day has a slight lead on Andrew La Grone in District 49.

Evnen raised one concern about the election. He said more than 25,000 early ballots sent to voters at the voters’ request weren’t returned. “My concern is, did they receive them?” he said. “What happened to them?” He said voters might simply have failed to return them. “Or did something else happen to them?”

He said he had no evidence that anything malicious had happened with those. He said the return rate in the general election was more than 90%, while the return rate for those in the primary election in May was 85%.

But if there is an increase in early balloting over the long term, he said, the intensity of preparing and monitoring for problems should increase. Mail-in ballots have been allowed in the state for more than 20 years, he said.

“Securing the integrity of our elections is bedrock,” he said. He said when a person goes to the polling place to vote, the process remains in the voter’s hands and is more secure.

He said that all six ballot measures, including expansion of gambling, passed.

All in all, he said, Nebraska performed well in the primary and general elections. “Our representative democracy cannot survive and thrive without the active, informed participation of voters,” he said. “Nebraskans can be proud of their participation in the elections of 2020.”

Rep. Don Bacon will return to the U.S. House after defeating Democrat Kara Eastman in a tough 2nd District race.

Sasse might have been able to expand his early 2-to-1 lead over his closest competitor, Omaha baker Chris Janicek, if the senator had not been heard on an audio clip sharply criticizing President Donald Trump.

Nebraska voters approved a trio of ballot initiatives aimed at allowing casino gambling at six licensed horse ractracks across the state and devoting some of the proceeds to property tax relief.

After long losing streak, why did Nebraska gambling supporters finally hit the jackpot?

Nebraska held the line against expanded gambling for more than 25 years, so what changed on Tuesday. Growing public acceptance of gambling and the appeal of property tax relief are among the reasons.

The group enlisted observers across Nebraska and said they witnessed few problems, and saw no voter intimidation. One exception: some national calls telling people to stay safe, stay home.

A voter with her daughter at Our Lady of Guadalupe in South Omaha. Four races in Nebraska met the threshold for an automatic recount. And two Sarpy legislative races were close enough to qualify for a recount at a candidate’s expense.