Rare, as in really rare.

The foursome amounted to nearly 1% of the world's population of wild migrating whooping cranes, according to wildlife officials. They are members of the Aransas/Wood Buffalo population and were traveling about 2,500 miles from their wintering grounds on the Texas coast to their nesting area in Canada.

While in Nebraska, the birds rested and fed at Trumbull Basin, a wetlands nestled in the Rainwater Basin of Nebraska northeast of Hastings. They flew north on Saturday.

State and federal officials say the birds' visit to Nebraska affirms a years-long, public-private effort to restore damaged habitat in the Rainwater Basin. Trumball Basin is a 425-acre privately owned wetlands that was restored through the federal Wetlands Reserve Program.

Years ago, farmers had attempted to convert the soggy ground to farmland, but when that proved impossible, the federal government assisted in restoring the land. About 6,000 cubic yards of sediment and nearly 1.5 miles of berms were removed.

"Seeing whooping cranes use one of the wetlands a group of Nebraska landowners worked so hard to restore is ... really gratifying,” said Andy Bishop, coordinator of the Rainwater Basin Joint Venture.

Habitat loss due to agriculture is the primary reason the species is teetering on the brink of extinction, according to wildlife officials.

Stopovers like Nebraska are important because of the risk of individual crane deaths during migration, wildlife officials say. Oklahoma is also home to critical layover habitat.

The joint venture, along with the USDA's Natural Resources Conservation Service, U.S. Fish and Wildlife Service and Nebraska Game and Parks Commission, worked with landowners on the restoration and management of the wetlands. Work continues through prescribed burns, grazing, tree cutting and the use of herbicides.

The total population of whooping cranes numbers about 800. About 500 of those are members of this migratory group. They winter at the Aransas National Wildlife Refuge along the Gulf of Mexico and then fly north to Wood Buffalo National Park in Canada.

Before conservation efforts took hold, the flock's population had dropped to 15 in 1941, according to the U.S. Fish and Wildlife Service.

The remaining 300 or so whooping cranes live in captivity, in a flock that doesn't migrate or among flocks being reintroduced to areas by humans.

Here are five of my better-read stories that are varied and share only one thing in common: They have nothing to do with COVID-19.

Nebraska's ethical hunters have nothing but disdain for poachers. And now I know why: Those who cheat at hunting bait their prey, monitor them…

Back in the day, opening a newspaper was like reading someone's diary. The paper was filled with stories in which the private lives of every d…

Reporting introduces reporters to people we'd otherwise not have a chance to meet. Andrea Grove was one of those interesting people. And each …

Adrienne Bonacci died years ago, but the memory of her never leaves her husband, Buster. That was very apparent when his family shared his mem…

Message in a bottle travels across the years

Every once in a while we have a chance to write stories that are simply charming. For me, this was one such story. Imagine that a bottle could…

Size: About 5 feet tall with a wingspan of 7 to 8 feet. Tallest bird in North America.

Nesting habitat: A pair of whooping cranes relies on an average of 1,013 acres in northwest Canada for nesting. The pair will use and defend the same nesting area year after year.

Lifespan: 22 to 24 years in the wild. Young cranes begin flying within 90 days and reproducing at ages 4 to 7 years old.

Previous range: Much of North America.

'Everything's been migrating through': Quick warmup brings surge of cranes, other birds to Nebraska

Usually, different species arrive in waves: geese, then ducks, and then cranes. This year, they're all coming at once. "So it's a good time to bird-watch."

Discover a new world while bird watching in Nebraska. Here's how to get started

Omaha area sits along a migratory route, and numbers have been high this spring.

May 1 was a big day for the staff members and volunteers at the Crane Trust Nature and Visitor Center just off of Interstate 80 near Alda. The doors finally were reopened to the public after a 14-month hiatus caused by a pandemic.

Cunningham Lake set to reopen in July, but it may be off-limits to outside boating

The nonprofit that will operate the park is proposing, at least initially, to restrict boating in hopes of preventing a re-infestation by the invasive zebra mussel. 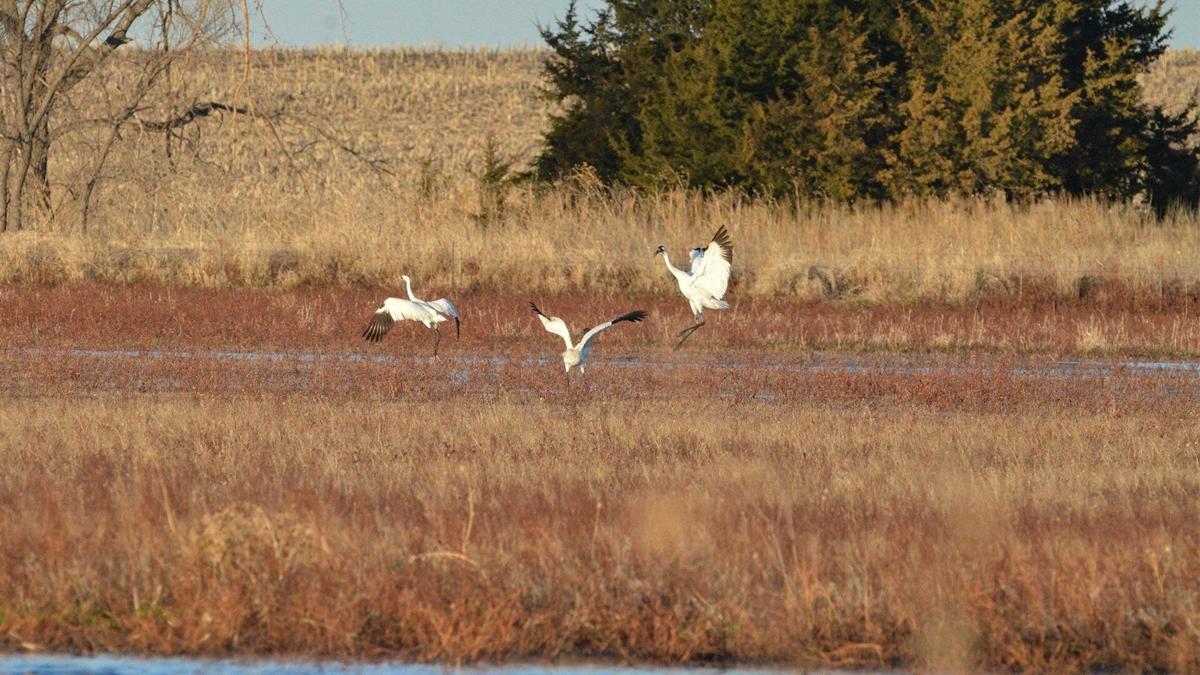 Four whooping cranes spent 11 days in Nebraska during their spring migration north. They rested and fed at Trumball Basin, a wetlands northeast of Hastings. The cranes flew off Saturday. 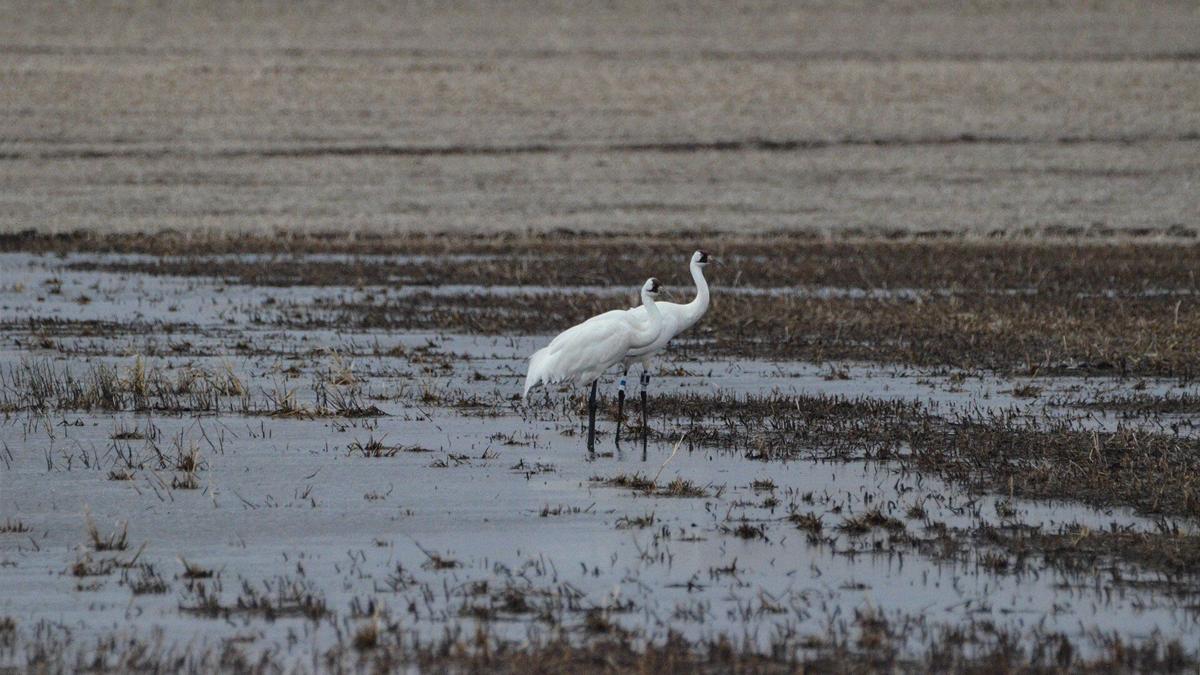 There are about 800 whooping cranes in the world, including about 500 in the Aransas/Wood Buffalo population, to which the cranes that visited Nebraska belong. 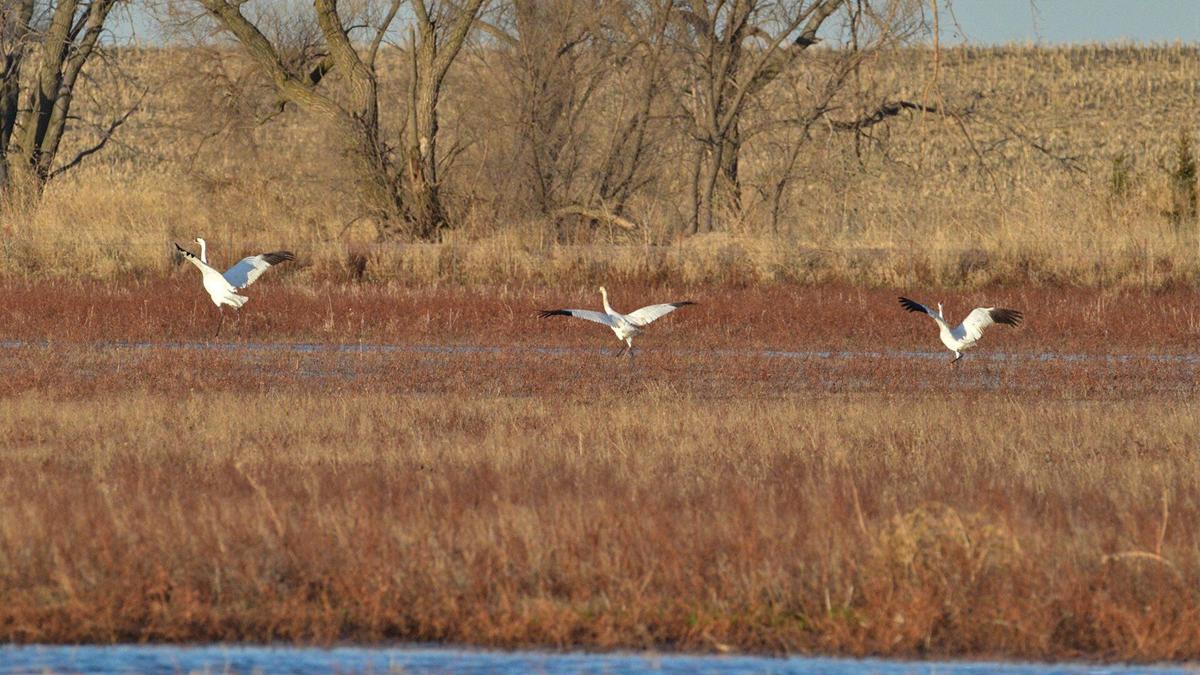 Whooping cranes are on the brink of extinction, and the primary reason is loss of habitat due to agriculture, according to wildlife officials. A joint venture restored damaged habitat into the Trumbull Basin, a 425-acre wetlands where four whooping cranes recently stopped on their way to Canada.