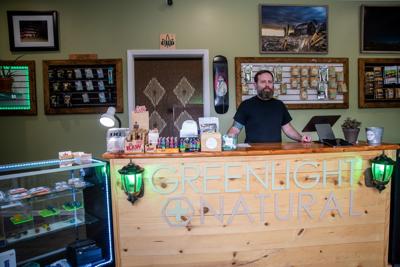 From Benson to South 24th Street to midtown Omaha, in Kearney and Scottsbluff and Lincoln and Norfolk, gas stations, smoke shops and specialty stores are offering THC-laden edibles, smokable hemp and vape pens.

For nearly the past year, the hot seller at many of those shops has been Delta 8, a byproduct of the hemp plant that’s chemically similar to Delta 9 tetrahydrocannabinol (THC) — the chemical associated with the high effect produced by marijuana.

Experts say the Delta 8 products are less potent than their close cousin, marijuana. But Delta 8 is psychotropic, meaning that it produces a high.

Marijuana remains illegal in Nebraska, though hemp, which comes from the same plant, is legal. The 2018 federal farm bill legalized and regulated production of hemp, but no limits were placed on the derivatives of the hemp plant, including Delta 8. That created a loophole allowing for its sale.

Those who use Delta 8 say it has similar benefits as cannabidiol, or CBD, the non-psychoactive compound found in cannabis that some people use for sleep, or to treat pain or inflammation. CBD has been sold in Nebraska for a few years.

Shop owners say their customers range from 18-year-olds to 80-year-olds, some of whom use Delta 8 because they say it alleviates the effects of seizures, post-traumatic stress disorder and depression. There’s not a federally set age limit on the products, though minors can’t purchase smokable products, and some shops don’t sell to anyone under 21.

An Omaha police spokesman said sale of the substance is legal. Gov. Pete Ricketts, who opposes legalization of marijuana, has asked the Nebraska Attorney General’s Office to review the sale of Delta 8, his spokesman said.

Concerns have been raised nationally about its regulation and whether some of the products contain contaminants. Nebraska shop owners acknowledge that the growing market for Delta 8 and other hemp derivatives is unregulated, and they say it’s largely up to retailers to ensure that they’re selling quality products.

“It’s pretty much the vast majority of what I sell,” Potratz said. “I would say nine out of 10 customers who come in are looking for Delta 8.”

After years of discussion about allowing cultivation of hemp in Nebraska, the U.S. Congress cleared the way by legalizing it in the 2018 farm bill.

The law was hailed as a possible savior for Nebraska farmers, a small group of whom are in the early stages of trying their hand at growing hemp for commercial uses. Hemp can be used to produce items like cloth, paper and cosmetics.

Under the law, hemp must have less than 0.3% Delta 9 THC to be legal. But in opening the door to hemp, the farm bill also made legal derivatives found in hemp, including Delta 8 — provided that the final product is below the 0.3% threshold.

Officer Michael Pecha, a spokesman for the Omaha Police Department, said: “OPD monitors and checks on the shops selling these products to make sure they are selling items that are legal in Nebraska. If a business is found to be in violation, we will take enforcement action.”

Ismail Dweikat, a professor of agronomy and horticulture at the University of Nebraska-Lincoln, said the hemp plant produces more than 100 different cannabinoids that produce different effects when consumed, including CBD and Deltas 8 and 9.

Dweikat, who specializes in plant breeding and genetics, said Delta 8 is a minor cannabinoid with a low concentration of THC. A lower potency generally produces a less pronounced “high feeling,” he said.

Passage of the 2018 farm bill prompted the Nebraska Legislature to pass a complementary law in 2019 allowing cultivation of hemp. The law provided for the licensing and regulation of the new crop, and created the Nebraska Hemp Commission to promote hemp and its products.

State Sen. Justin Wayne of Omaha, who introduced Nebraska’s hemp bill, said in 2019 that he introduced the measure to create jobs in Nebraska and hoped that hemp processing facilities would sprout up in his North Omaha district.

In a recent interview, Wayne said lawmakers at the time didn’t discuss the possibility of hemp derivatives that contain THC making their way into Omaha storefronts.

But Wayne, who supports legalization of medical and recreational marijuana, said he doesn’t have a problem with the product.

“Delta 8 doesn’t bother me personally,” Wayne said. “Our laws and regulations have to catch up.”

An opponent of Nebraska’s hemp bill, State Sen. John Lowe of Kearney, warned at the time that the hemp bill could make it more difficult to hold the line on legalizing marijuana. He said he thought that the Legislature was going down a path “without knowing the depth.”

To be sure, the federal government’s position on CBD and other hemp derivatives is confusing, the Harvard Medical School noted, as Delta 8 is still included on the Drug Enforcement Administration’s list of controlled substances.

Some industry watchers have expressed concerns about a lack of oversight of Delta 8 and what may be in the products that contain it.

Large cannabis producers have been pushing to clamp down on Delta 8 after two tests of samples — one by the U.S. Cannabis Council trade group and another commissioned by Bloomberg News — found high levels of intoxicants in several of the products, as well as metals in some of them, the Chicago Tribune reported.

In recent months, 14 states, including Colorado and Iowa, have blocked the sale of Delta 8, citing lack of research into the compound’s psychoactive effects, NBC News reported in June.

Wayne said he would like to explore consumer protection legislation related to Delta 8 to provide “a framework to make sure that there’s a healthy and safe product” being offered.

Shiva Kumar, a co-owner of Lincoln-based CBD Remedies, said the “highly unregulated” nature of the market poses a challenge to consumers to ensure that they’re purchasing safe products. It’s incumbent on retailers to know the source of their products, he said.

CBD Remedies includes consultants Andrea Holmes, a professor of chemistry at Doane University, and Dr. Amanda McKinney, a board-certified physician who is associate dean of health sciences at Doane.

Kumar, Holmes and McKinney said CBD Remedies’ products are tested by third-party labs and come with certificates of analysis that detail the potency and contaminant level of the product.

Products at Greenlight Natural, too, come with a QR code that a customer can scan with their smartphone. The code directs them to lab results showing information about the potency of the product and contaminant levels.

Holmes said generally speaking, the high feeling produced by Delta 8 is about four times less than what someone would feel after consuming Delta 9 THC from marijuana. But the difference isn’t as clear-cut as that: Age, body type and the method of consumption all play a role in how someone will feel.

Last week, Senate Majority Leader Chuck Schumer unveiled a measure to treat marijuana like alcohol or tobacco, allowing it to be taxed and regulated, though states could still outlaw its use. Under the proposal, those under 21 couldn’t purchase it, and it would remain illegal to sell significant quantities without proper licensing and authorization.

In Nebraska, a push is underway to legalize medical marijuana in the state. Nebraskans for Medical Marijuana is collecting signatures to put the issue before voters in 2022.

That effort follows a similar one in 2020 that failed when the Nebraska Supreme Court ruled that the proposal violated a requirement that a ballot initiative stick to a single subject.

McKinney said she hopes that scientists and doctors who understand cannabis are included in discussions by state and federal leaders about regulation of such products, and in the larger conversation about legalization of marijuana.

Holmes said experiments and trials have shown Delta 8 to be “a pretty powerful anti-inflammatory” that can also help nausea in cancer patients, among other uses.

McKinney said, “I’m looking forward to that day (that marijuana is legalized), but right now we’re fighting all of these little battles — first it was CBD and now it’s Delta 8, and that’s going to continue until it’s fully legal ... at the federal level.” 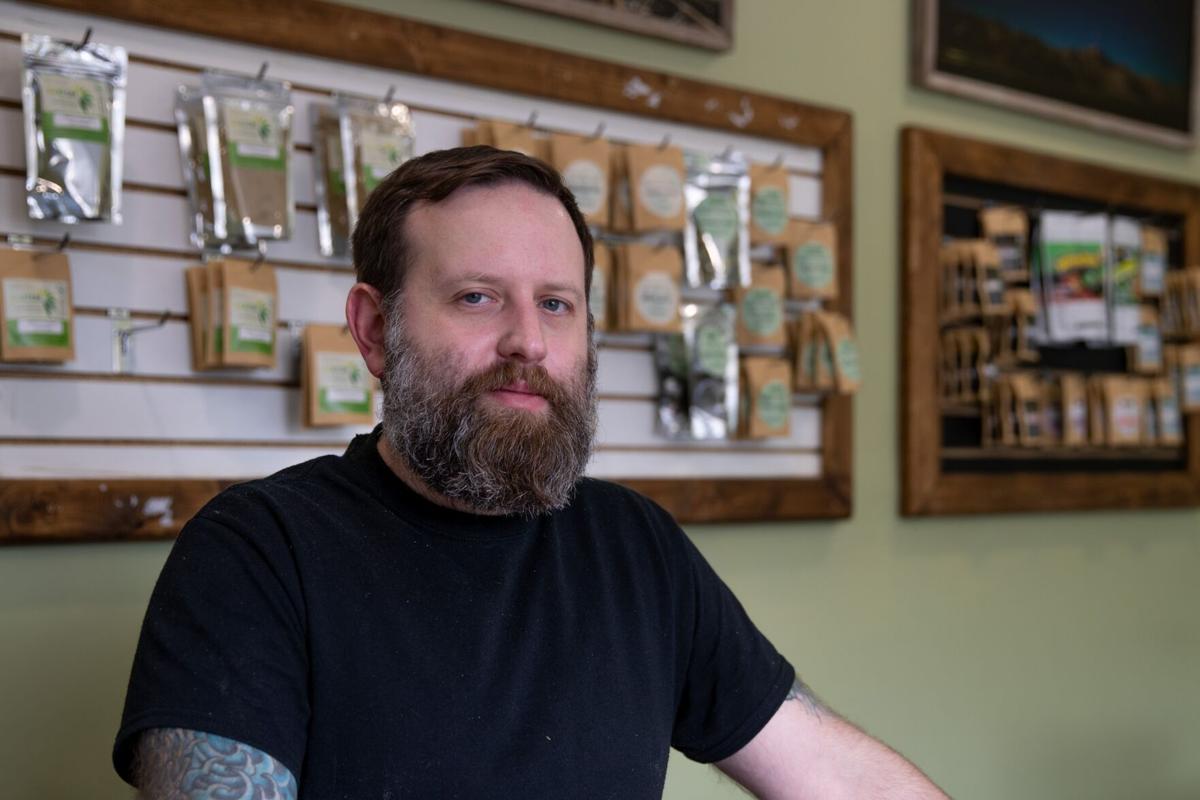 Chris Potratz, owner of Greenlight Natural, said even though Delta 8 is less potent than marijuana, "you're still going to get an effect for sure." 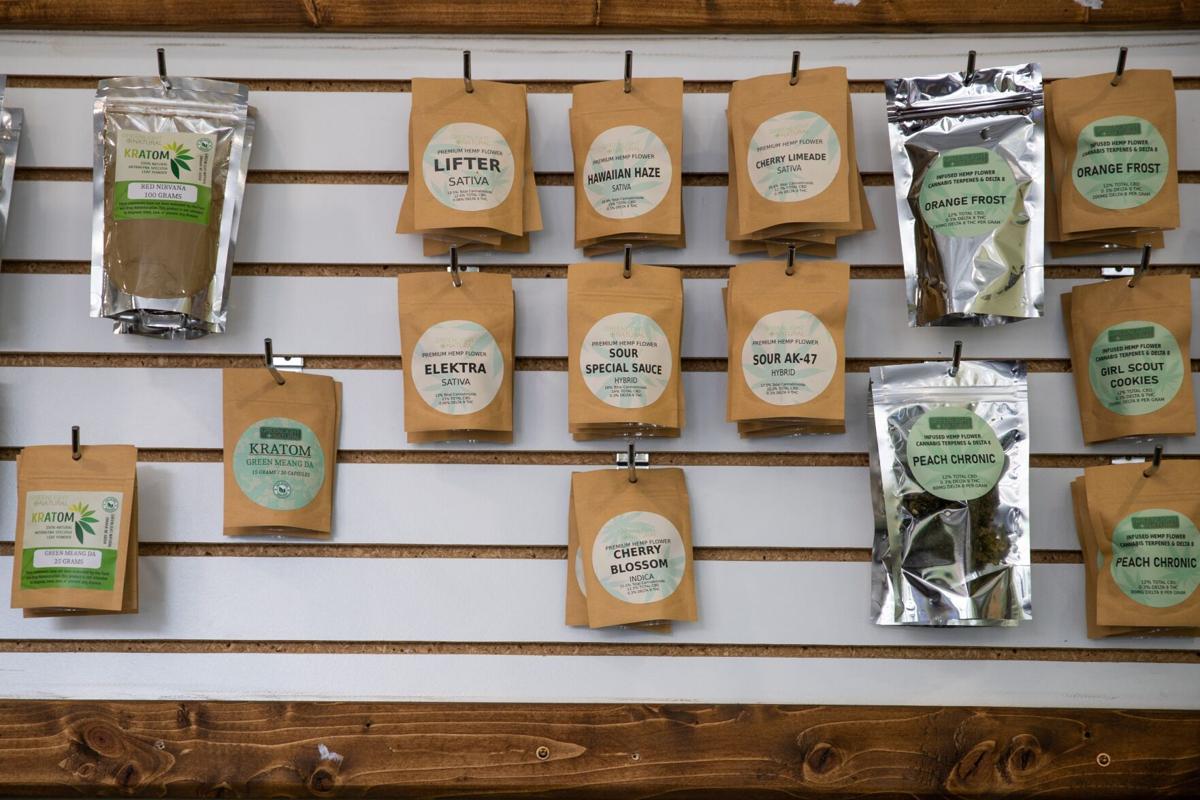 Delta 8 flower is available at Greenlight Natural in Omaha. 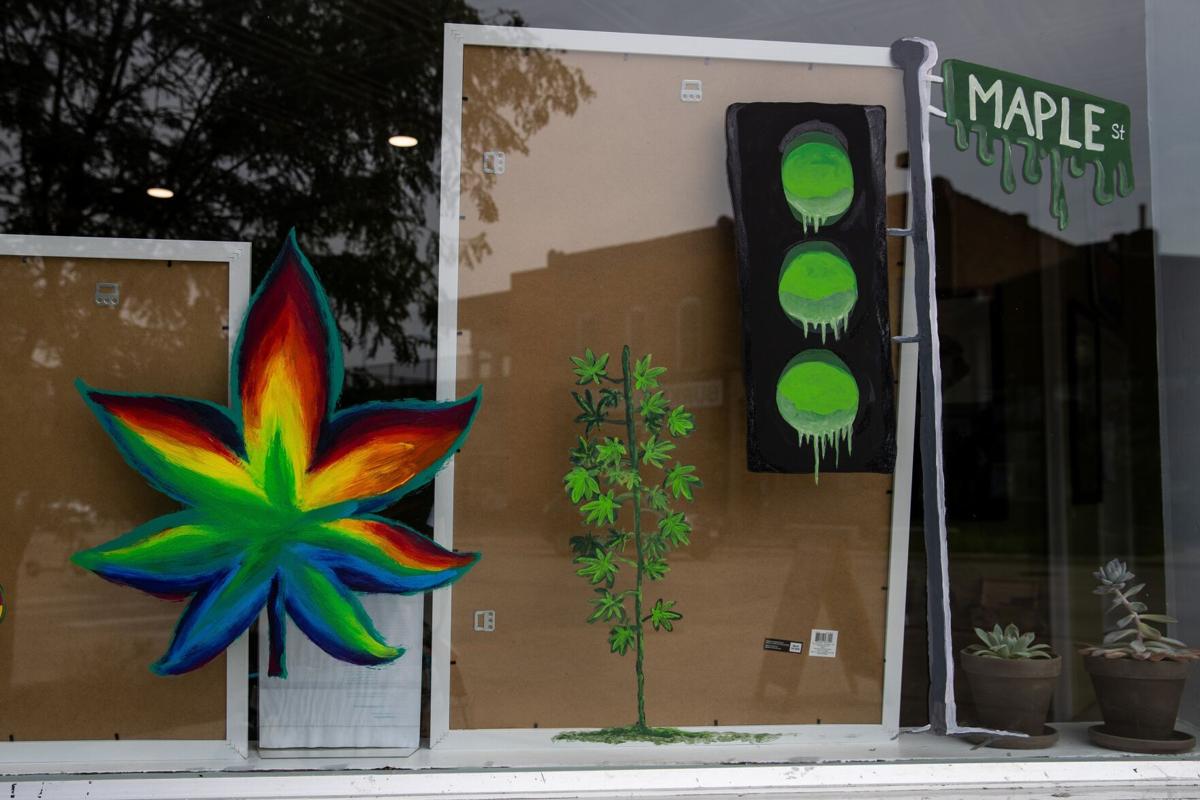 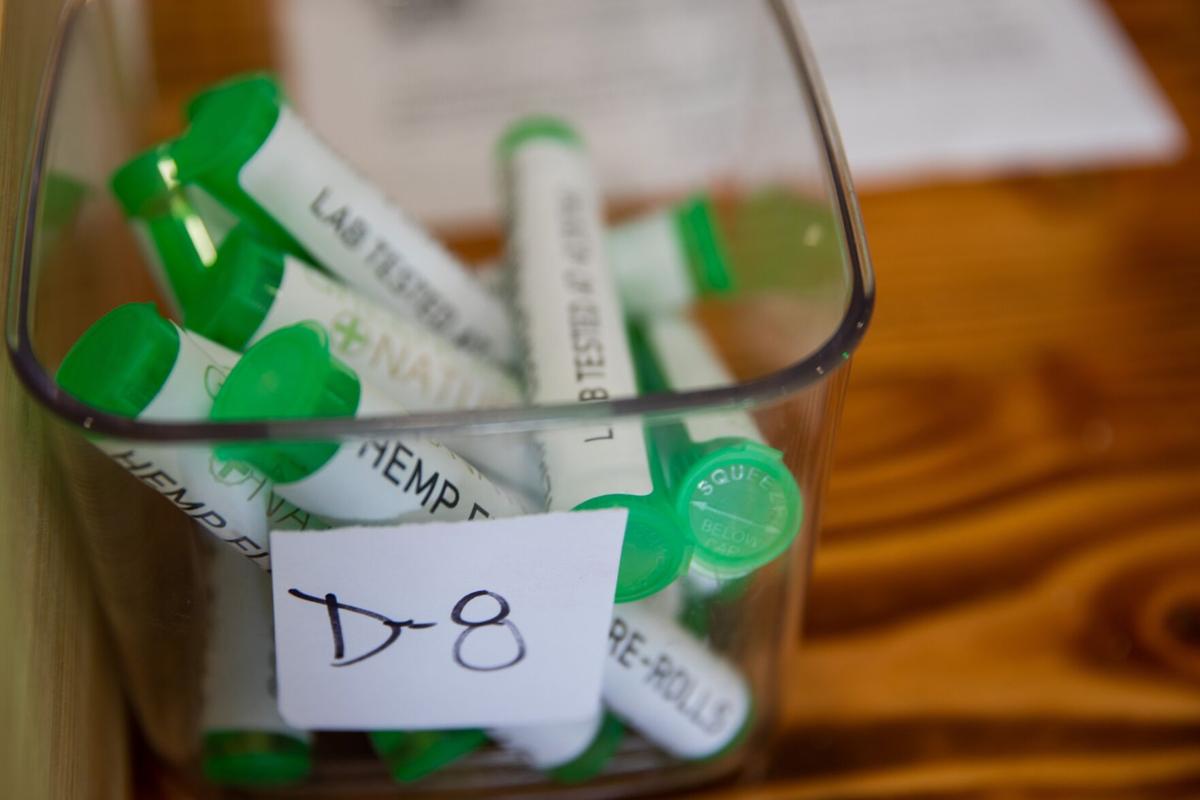 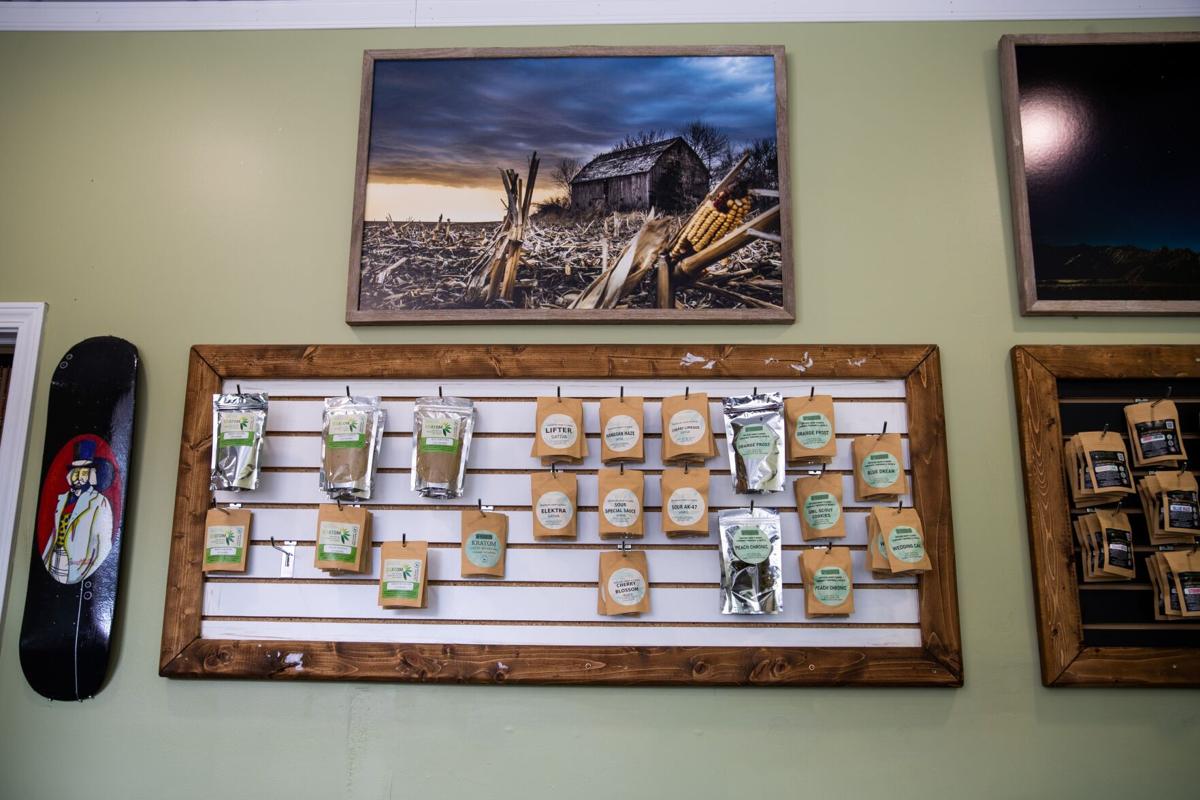 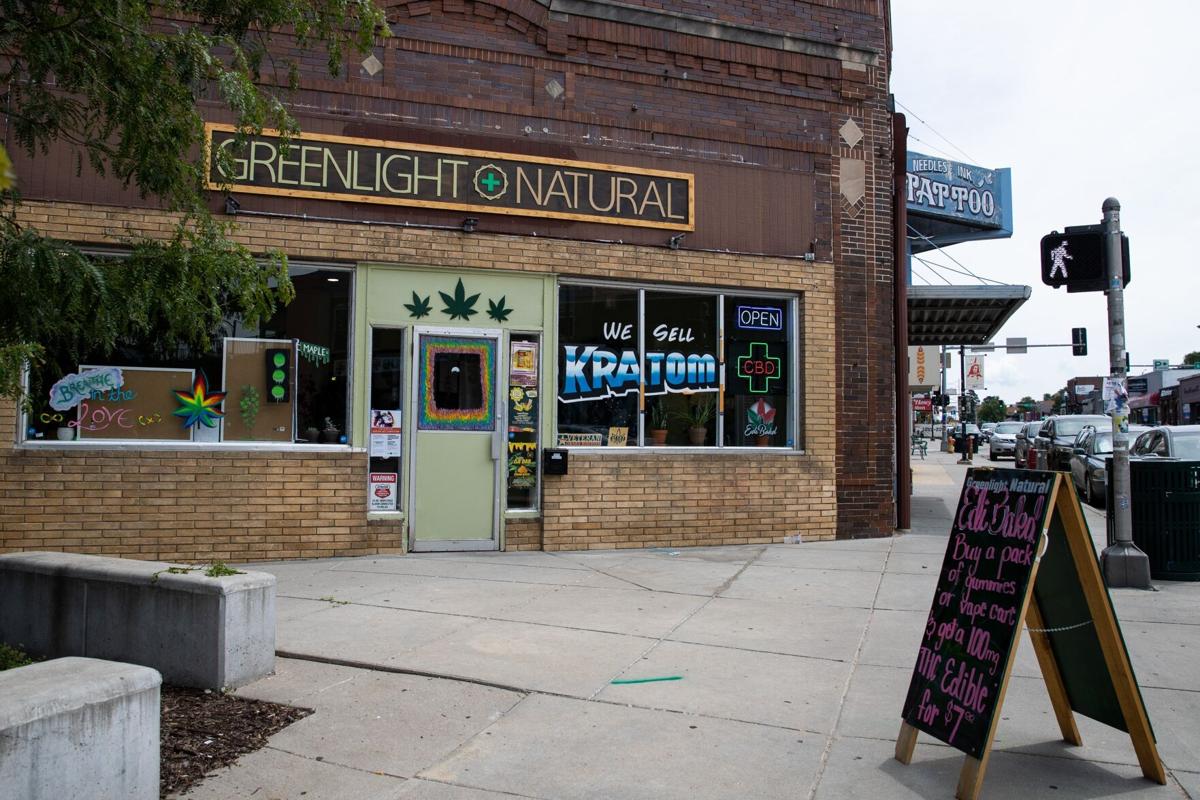 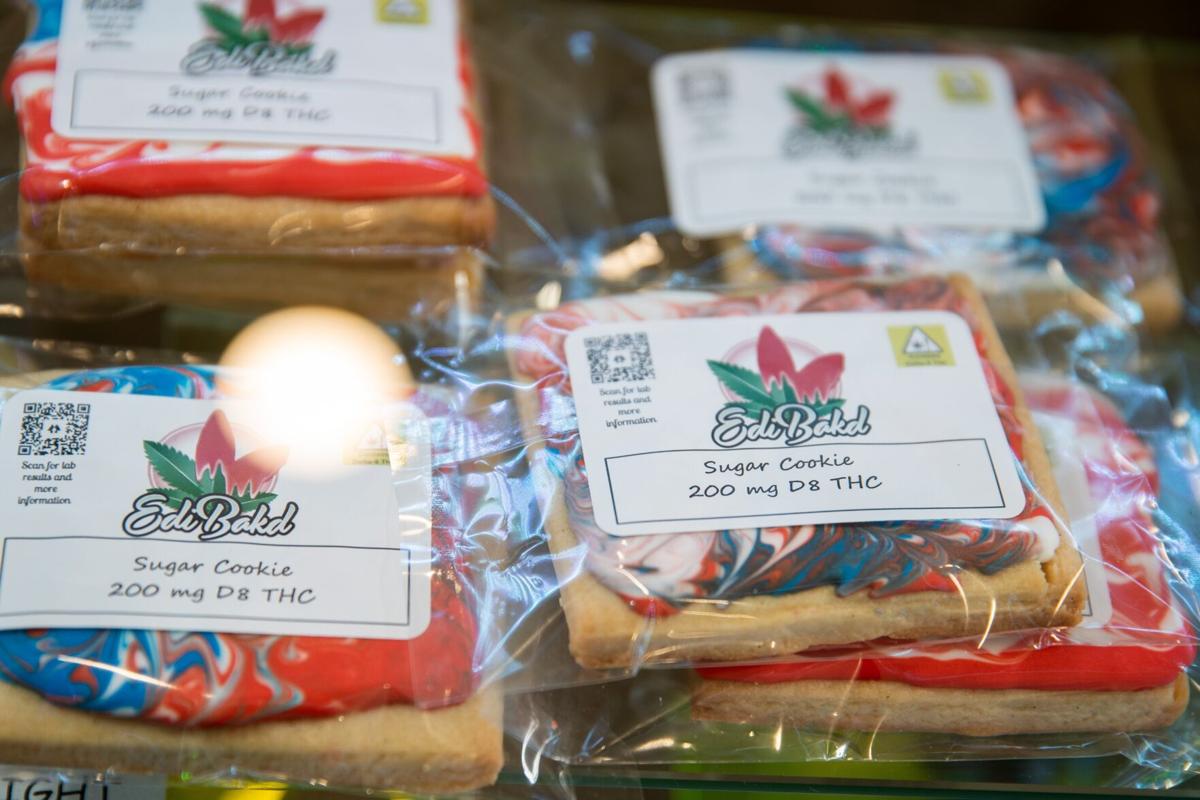 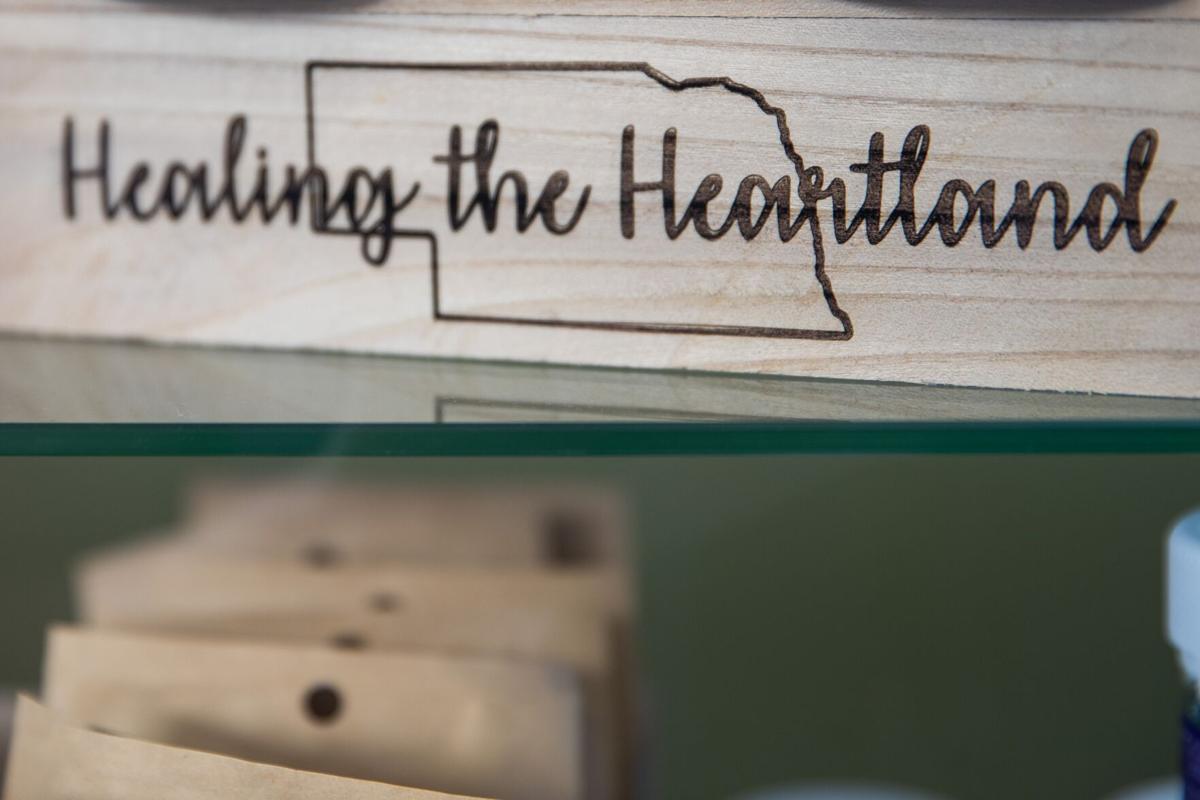 A display case for Delta 8 and CBD products at Greenlight Natural. Potratz said he makes no claims about the medicinal effects of the products he sells.

Items on display at Greenlight Natural. 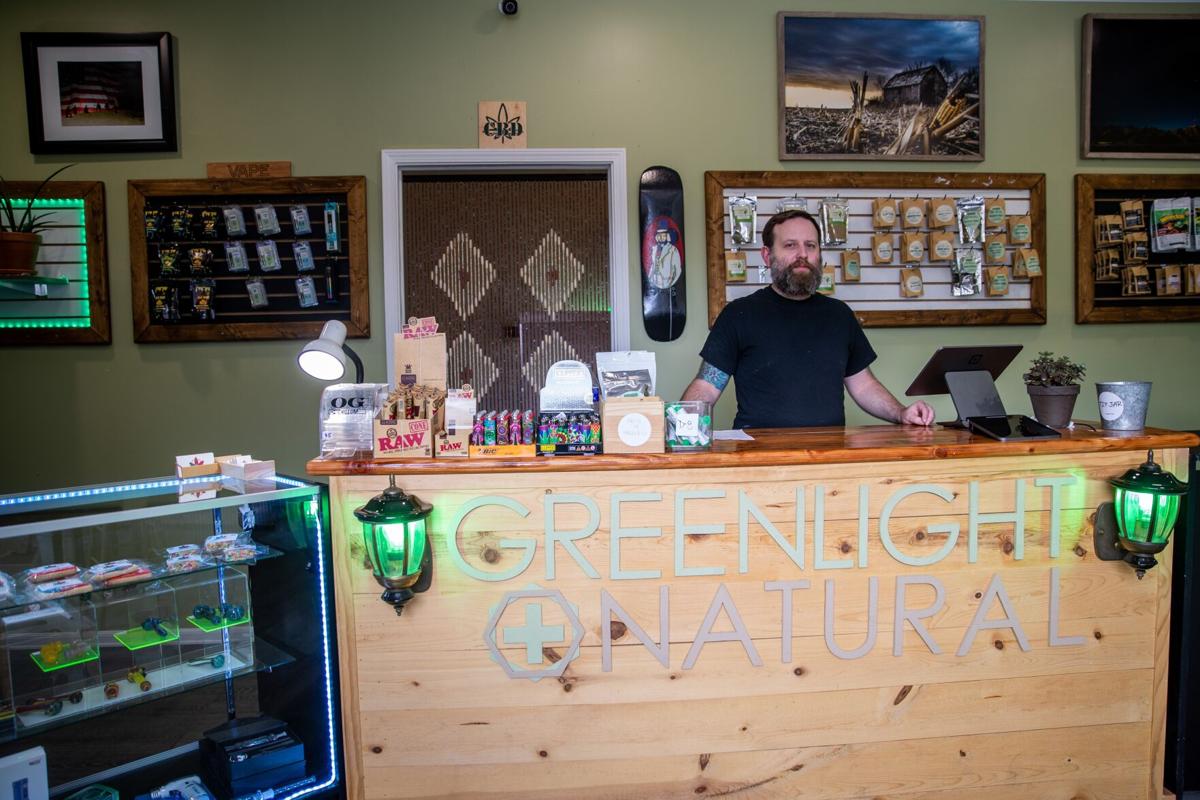 Chris Potratz is the owner of Greenlight Natural in Omaha, one of the stores selling Delta 8 products. 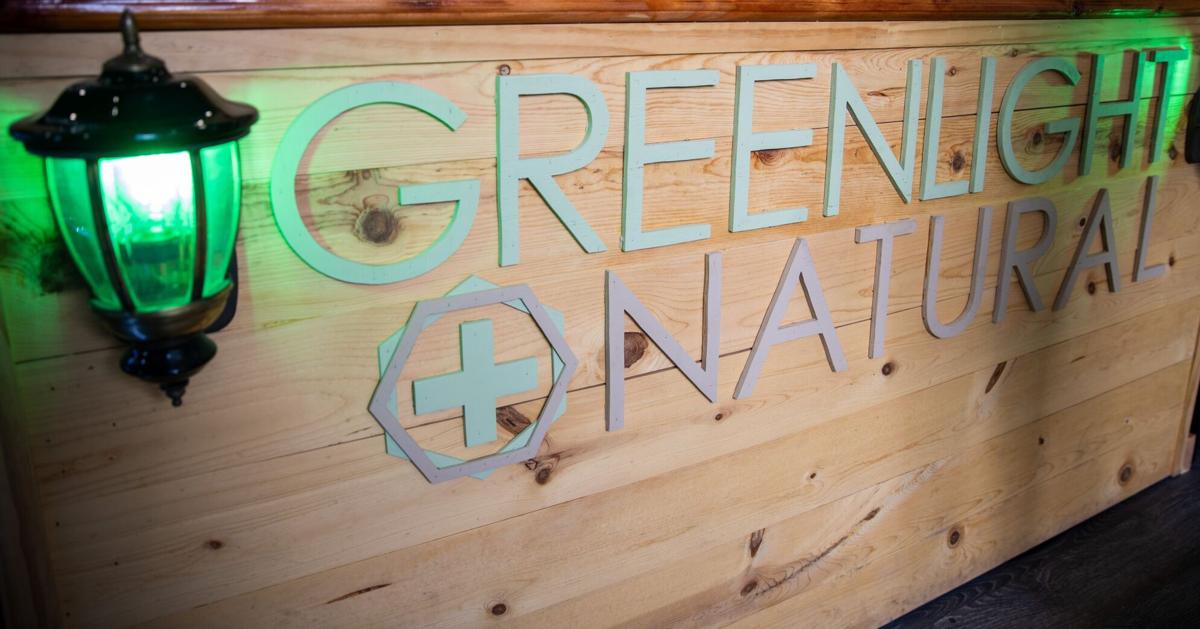 Greenlight Natural owner Chris Potratz said "nine out of 10 customers who come in are looking for Delta 8." 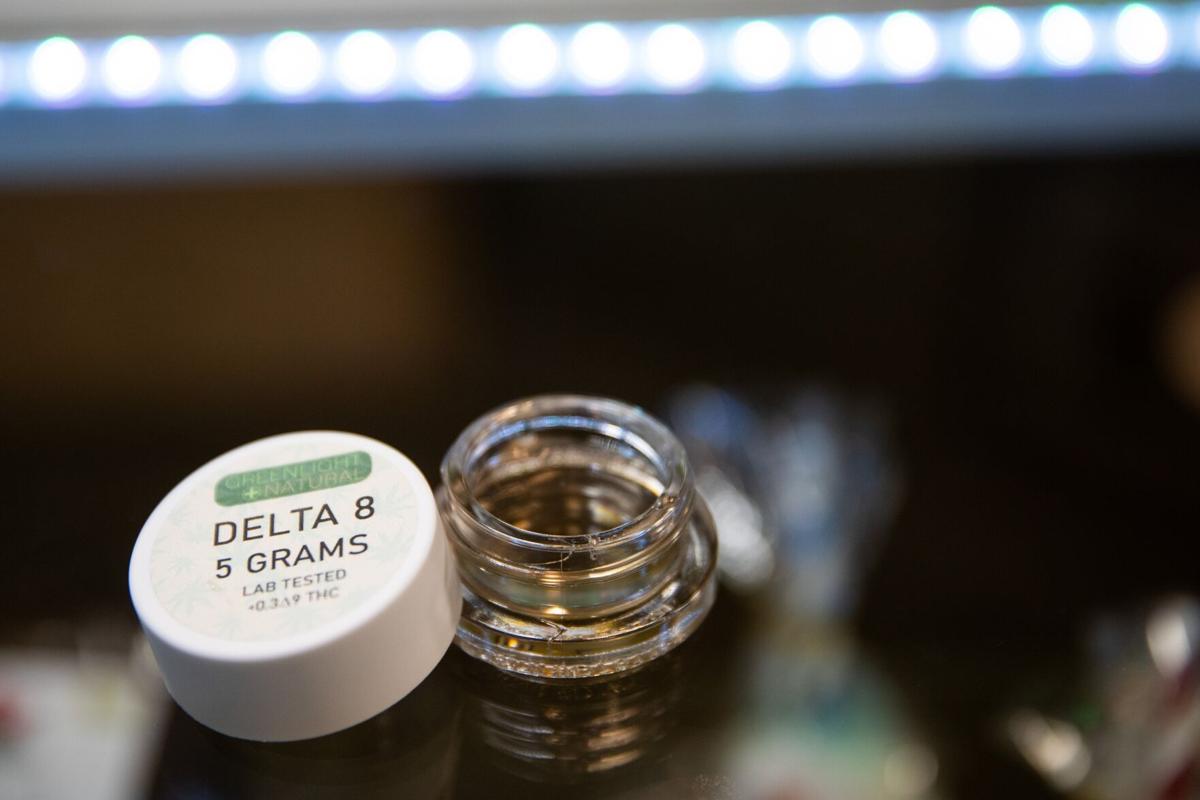 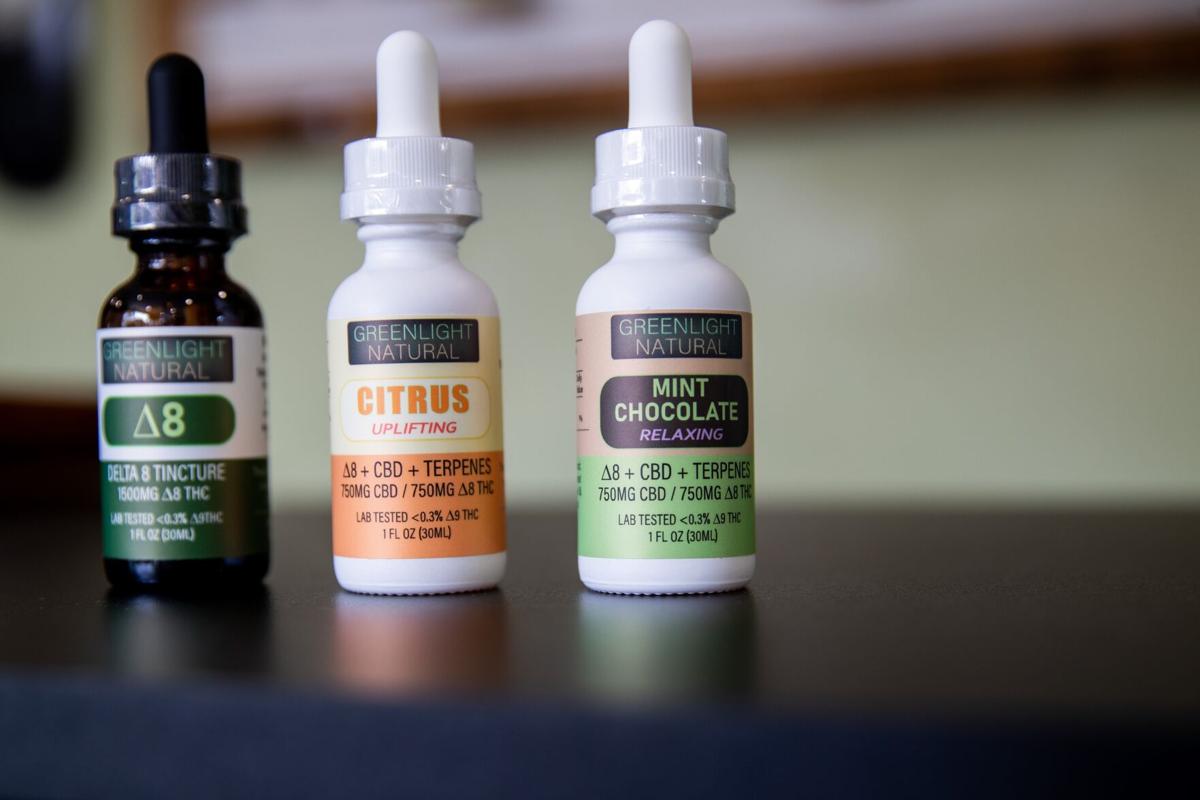 Delta 8 oils are amiable at Greenlight Natural in Omaha.

Chris Potratz, owner of Greenlight Natural, said even though Delta 8 is less potent than marijuana, "you're still going to get an effect for sure."

Delta 8 flower is available at Greenlight Natural in Omaha.

A display case for Delta 8 and CBD products at Greenlight Natural. Potratz said he makes no claims about the medicinal effects of the products he sells.

Items on display at Greenlight Natural.

Chris Potratz is the owner of Greenlight Natural in Omaha, one of the stores selling Delta 8 products.

Greenlight Natural owner Chris Potratz said "nine out of 10 customers who come in are looking for Delta 8."

Delta 8 oils are amiable at Greenlight Natural in Omaha.

Driverless 'robotaxies' have taken the streets in Beijing

Driverless 'robotaxies' have taken the streets in Beijing

The measures would allow Nebraskans to decide if they want medical marijuana in the state.

Marijuana hasn't been legalized in Nebraska, but if and when it is, the Nebraska Cannabis Association said it will work to develop "a robust, well-regulated cannabis industry."