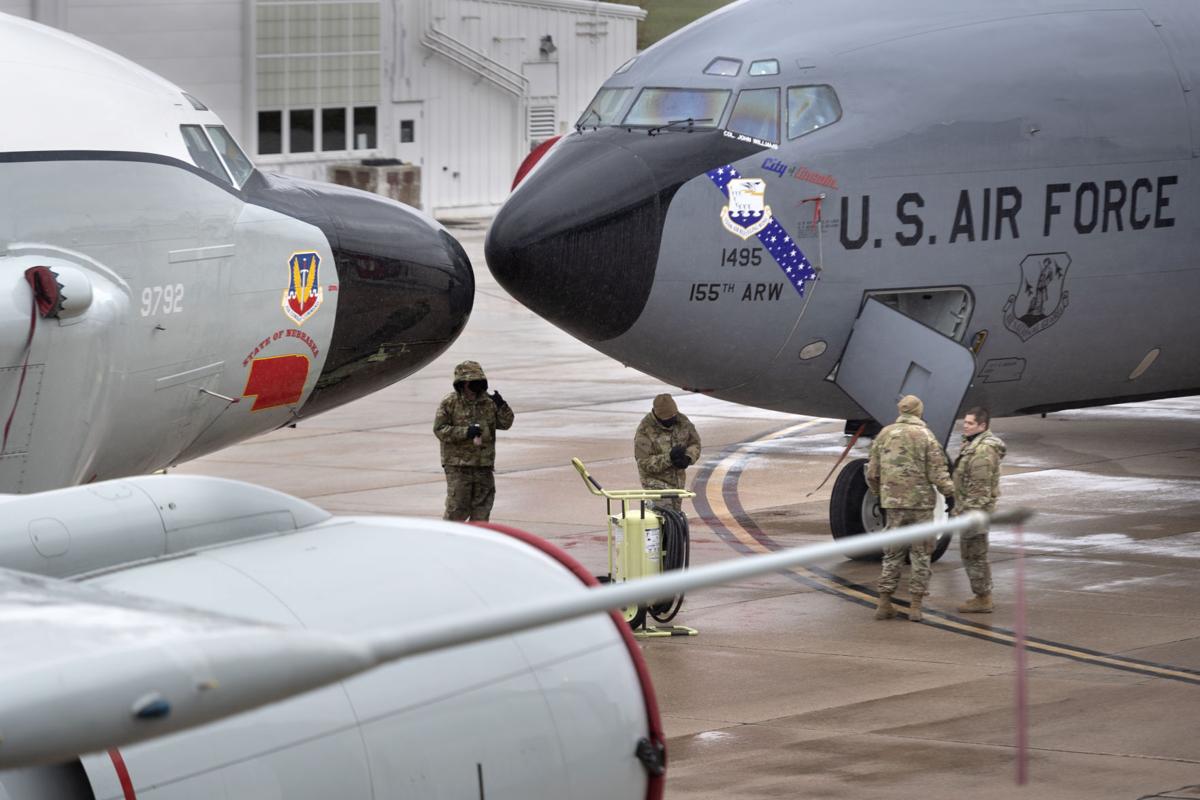 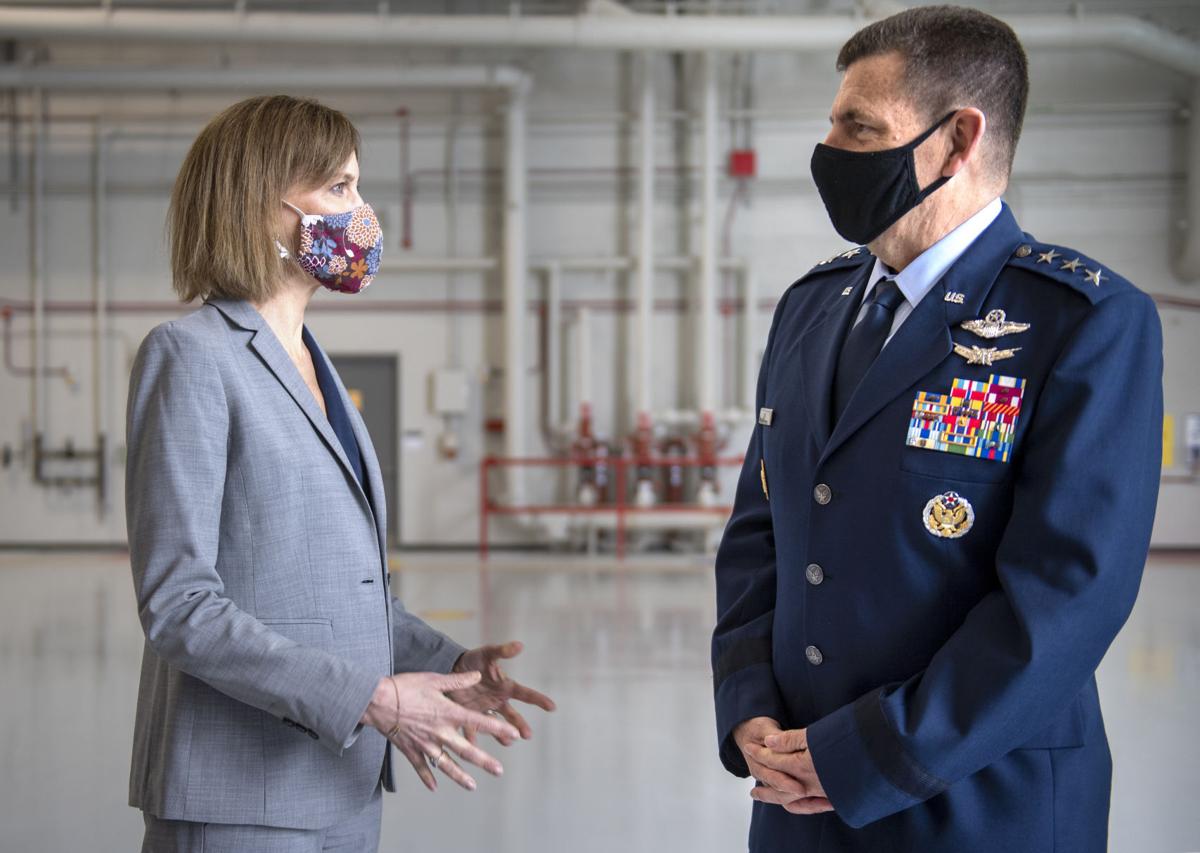 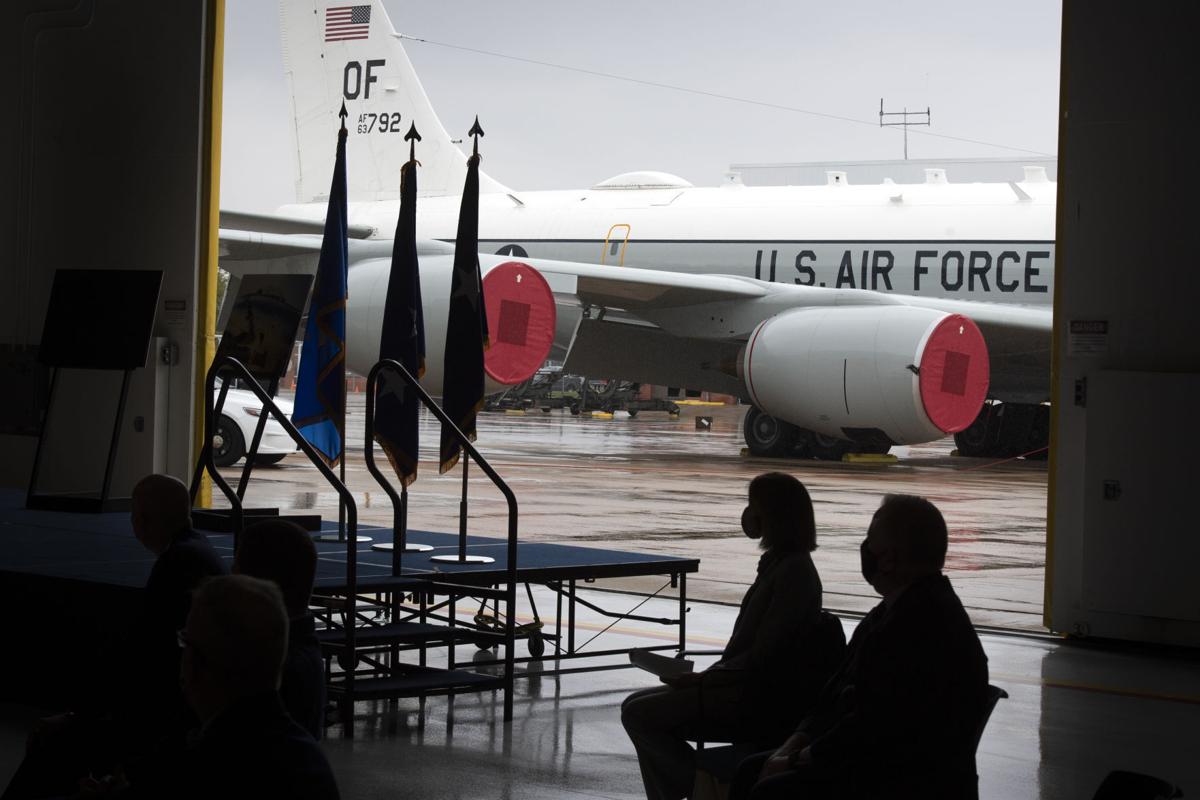 A 55th Wing RC-135 outside the hangar during the ceremony Friday. "We're going to have an air force in Lincoln that is larger than many countries' air force," Gov. Pete Ricketts said.

LINCOLN — For the first time in more than five decades, Lincoln is officially home to an Air Force base — temporary as it may be.

Gov. Pete Ricketts symbolically “reopened” the Lincoln Air Force Base during a ceremony Friday in which the Offutt Air Force Base’s 55th Wing was formally welcomed at the airport’s Nebraska Air National Guard base.

Planes and crew members from the 55th Wing made the move in February from Offutt, where an almost $150 million runway construction project is underway.

The governor joined the mayors of Lincoln and Bellevue and Guard and Air Force officials at the Guard’s main hangar for the ceremony, which was pushed inside because of rain.

Lt. Gen Michael Loh, director of the Air National Guard, called it a “great day” for those involved in the move and for national security.

“This is a terrific partnership,” he said.

The Air Force wing has used Lincoln as a haven before. In 2006, the Offutt planes flew out of Lincoln for 18 months because of runway maintenance. Lincoln provided a home for the fleet during the flooding of 2019, too.

“They’re like family to us,” Col. Gavin Marks, commander of the 55th Wing, said of the Lincoln base and its personnel. “This feels like a second home.”

Lincoln’s airport has deep aviation roots. It was home to burgeoning flight schools and plane factories in the 1920s, said Col. John Williams, commander of the refueling wing.

The city was home to an army airfield during World War II, and after a brief closure, the airfield was home to the Strategic Air Command’s nuclear deterrence program. Then, the Lincoln Air Force Base was established in 1952 to host nuclear bomber and intercontinental ballistic units. The base was deactivated in 1966, transitioning to the municipal airport it is now.

“This is really part of the tradition of the community,” Lincoln Mayor Leirion Gaylor Baird said.

Almost 900 airmen will commute to Lincoln daily over the next two years, joining the hundreds of aviation personnel from the Guard at the base.

“We’re going to have an air force in Lincoln that is larger than many countries’ air force,” Ricketts said.

Plans to replace Offutt’s 80-year-old runway have been in the works since 2014. The planes are expected to be stationed in Lincoln until September 2022.

The move is a boost for Lincoln’s airport. The Air Force spent almost $40 million upgrading airport facilities, and that “will pay dividends far into the future,” Gaylor Baird said.

And to those who hear more rumbling in the skies, the mayor said to keep in mind what the collaboration means for the nation.

“It is temporary, but it’s a way that we can support the men and women who serve our country every day,” she said.

The “reopening” of Air Force bases has become rare since the end of the Cold War. Even if it’s just a temporary move, Williams said the relocation was “historic.”

About 100 people bid farewell to an OC-135B aircraft on Friday, closing the curtain on a pact that was one of the last vestiges of post-Cold War military cooperation between the U.S. and Russia.

The $198 million runway reconstruction project at Offutt Air Force Base is about one-third complete and is still expected to wrap up on schedule in the fall of 2022.

A 55th Wing RC-135 outside the hangar during the ceremony Friday. "We're going to have an air force in Lincoln that is larger than many countries' air force," Gov. Pete Ricketts said.