Corinne Ehlers of Papillion tried everything she could to breastfeed her now-3½-month-old daughter, Charlotte.

She saw multiple lactation consultants, who concluded her milk supply just wasn’t adequate. By then, Charlotte had lost more weight than was usual for a newborn, so Ehlers started supplementing with infant formula. Ultimately, she took her pediatrician’s advice and switched to formula entirely.

“It was really disappointing; it was heartbreaking,” she said of her realization that her body wasn’t going to provide for her child as she had planned.

Over the last month or two, Ehlers has seen stocks of infant formula on store shelves dwindle, the result of a nationwide shortage of formula created by a combination of short- and long-term problems that have affected most of the biggest U.S. brands.

Thanks to a network of family and friends who pick up the type of formula she uses whenever they see it in stores, Ehlers has collected what she estimates is a month’s supply of formula. But she worries about what will happen if the shortage gets worse and she can’t find the product, particularly as Charlotte grows and eats more.

“It’s just scary to think you may not be able to feed your child,” she said.

Ehlers isn’t the only parent on the hunt for formula these days. Millions of babies in the U.S. rely on formula, which is the only source of nutrition recommended for infants who aren’t exclusively breastfed.

The supply problems began last year as the COVID-19 pandemic led to economy-wide disruptions in labor, transportation and raw materials that also affected the formula industry. Inventory was further squeezed by parents stockpiling during COVID lockdowns.

Then, in February, Abbott Nutrition recalled several major brands of powdered formula and shut down its Sturgis, Michigan, factory when federal officials began investigating what happened when four babies suffered bacterial infections after consuming formula from the facility.

Abbott is one of only a handful of companies that produce the vast majority of the U.S. formula supply, so its recall wiped out a large segment of the market.

The company says its products have not been directly linked to the bacterial infections in children, pointing out that genetic samples collected from its factory did not match those found in several infants who got sick.

President Joe Biden announced this week that the federal government is working with manufacturers to increase production of formula and help families access existing stock.

As a result, federal officials said, more infant formula has been produced in the last four weeks than in the four weeks preceding the recall, even with the Abbott facility offline.

The White House also announced additional steps to get more formula on shelves as quickly as possible without compromising safety.

The U.S. Department of Agriculture is working with states to allow people in the Supplemental Nutrition Program for Women, Infants and Children, or WIC, to use their benefits on a wider variety of products, both brands and sizes. The White House also called on federal agencies to crack down on price gouging and to increase imports of formula.

Peggy Trouba, manager of Nebraska WIC, said the state has received a waiver from USDA to broaden its offerings. The agency has a list of recommended substitutes if parents and caregivers can’t find their usual formula, and WIC clinic staff also can help.

“We’re doing everything we can to help,” she said. “It’s a tough situation for parents and caregivers out there.”

The Nebraska Department of Health and Human Services on Friday urged parents and caregivers to contact their health care provider before pursuing other alternatives. Agency officials warned against watering down formula to stretch supplies or making homemade baby formula.

Most formulas contain protein from cow’s milk that has been altered to be easier to digest and enhanced with extra nutrients needed for growth and development. The FDA sets specific nutritional requirements, including minimum amounts of protein, fat, calcium and a number of vitamins.

Watering down formula, state health officials said, is dangerous, can cause nutritional imbalances in infants and could lead to serious health problems. Caregivers, they said, always should mix formula as directed by the manufacturer or a pediatrician.

The American Academy of Pediatrics has advised that recipes for homemade formula circulating on the internet may not be safe and do not meet infants’ nutritional needs.

Phil Rooney, a spokesman for the Douglas County Health Department, said the Douglas/Sarpy County WIC clinic has been dealing with the shortage for months because of the Abbott shutdown.

Program participants are being encouraged to make regular checks of multiple stores to try to find formula, he said. If they’re still having difficulty, they should contact their local WIC clinic. Nutritionists can help them make adjustments under the looser purchasing options.

But in light of the supply chain problems, the food bank in July will begin transporting and distributing formula returned to the Douglas/Sarpy County WIC locations. “The Food Bank is hopeful that through this partnership we can further assist families during this difficult time,” food bank officials said in a statement.

Dr. Jeremy Toffle, a pediatrician with Children’s Physicians West Village Pointe office, said the clinic gets calls every day from parents wondering where to get formula and seeking manufacturer samples.

The clinic typically doesn’t have samples these days, he said, because manufacturers are focused on getting formula on shelves and supply in the WIC program.

For infants who don’t require formula to meet special dietary needs, he suggests parents contact their pediatrician to recommend a substitute if they’re having trouble finding their regular brand. Most brands have similar formulas and they often are interchangeable, at least for a short time. The West Village Pointe clinic keeps lists of substitutes for such calls, he said.

Most of the calls, however, are coming from parents of infants who require special formulas, often because of intolerance to dairy or soy. In such cases, Toffle said, staff members can reach out to WIC clinics or other sources or even contact a manufacturer’s representative to see if they can find a couple of cans for a parent who can’t find it.

“We haven’t reached the point where we couldn’t find something for somebody yet, at least from our office’s standpoint,” Toffle said.

But parents with infants who have special dietary needs face a particular challenge.

Ehlers, the Papillion mom, said her young nephew can consume only a certain soy-based formula. His parents are stocked up, but she worries about him nonetheless.

“I just feel sorry for those moms with special needs,” she said.

Heather Whitehead of Lincoln is one of those moms. Her 8½-month-old son, Kobe, is sensitive to lactose and uses a special formula, which she has had trouble finding. She currently has two large cans and already is on the hunt for more, although she’s careful to use conventional retailers like Amazon. “I get online every day looking for it ... because what if I get to the bottom of that can?” she said.

Health officials warn against buying formula via social media websites or outside of conventional retailers because they could be counterfeit.

Whitehead said she’s part of a group on Facebook for moms involved in the formula search. Some are offering to donate. But one member recently urged caution with buying online, posting a photo of cans that someone else had bought only to find them already opened and filled with flour.

Meanwhile, the FDA is working with Abbott to fix the issues that triggered the shutdown of its Michigan plant, which produces Similac, EleCare and several other leading powdered formulas.

The Chicago-based company said this week that, pending FDA approval, it could restart manufacturing at its plant within two weeks. After that, it would take another six to eight weeks before new products hit store shelves.

A man trying to get a cat off a highway was struck by a pickup truck and killed Thursday night south of Holdrege in south-central Nebraska.

A 2022 Fremont High School graduate who was critically injured in a collision early Sunday is not expected to survive, according to a statement from the Fremont Public Schools.

Dozens of states, many led by Republicans, have embraced criminal justice reform. But an effort in Nebraska, home of the nation’s fastest-growing prison system, collapsed last month. Why did it fail?

A retweet from UNL Chancellor Ronnie Green convinced Grady Johnson to idle the planter last Saturday and instead walk across the graduation stage at Memorial Stadium.

A 2022 graduate of Southern High School in Wymore, Nebraska, died and another teenager was seriously injured in a one-vehicle rollover crash southeast of Beatrice.

Pillen says his campaign for Nebraska governor is 'invigorated'

During the contentious Republican primary, many of Jim Pillen's ads emphasized national, hot-button issues. His message is markedly different in his most recent ad.

State Sen. Carol Blood, a Democrat running for Nebraska governor, plans to continue campaigning on real issues facing Nebraskans. On one prominent issue, though, her stance is less clear-cut.

St. Francis Ministries contract finishes June 30. That date marks both the end of the contract and the conclusion of Nebraska's experiment with having private entities manage child welfare cases.

One pilot is dead after a plane crash at the Wayne Municipal Airport in northeast Nebraska Friday evening.

The Department of Defense has proposed a $50 million project to build a new home for a laboratory at Offutt Air Force Base that identifies the remains of missing U.S. military service members.

Shelves typically stocked with baby formula sit mostly empty at a store in San Antonio. Parents across the U.S. are scrambling to find baby formula because of supply disruptions and a major supplier’s safety recall.

With many pharmacies and stores short of baby formula, such as this Charlotte, N.C., pharmacy, mothers are relying on friends, families, food banks and other sources. 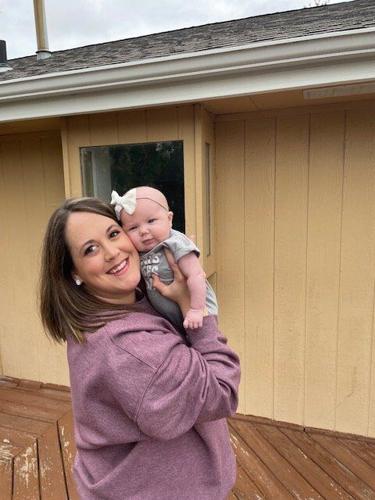 Corinne Ehlers of Papillion with her daughter, Charlotte. Ehlers turned to infant formula to feed Charlotte after her supply of breast milk proved inadequate. Now, with formula supplies short, she has called on a network of family and friends to pick it up when they see it in stores.