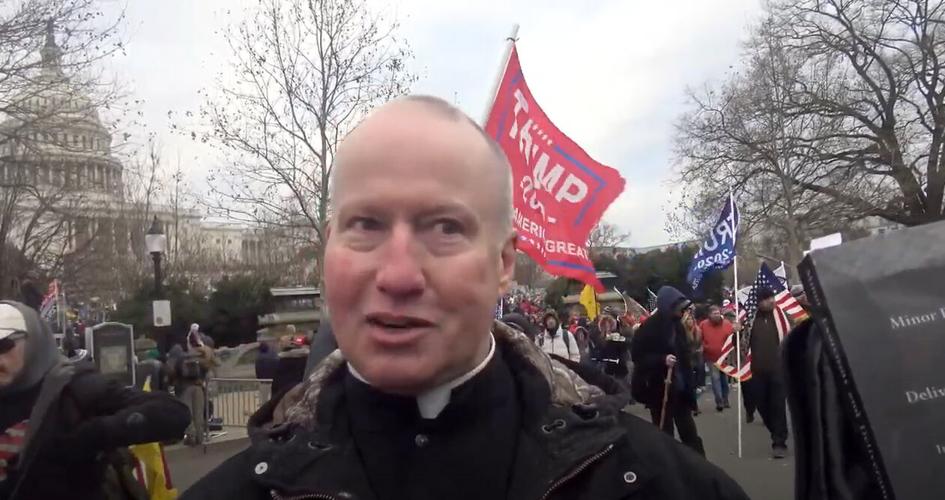 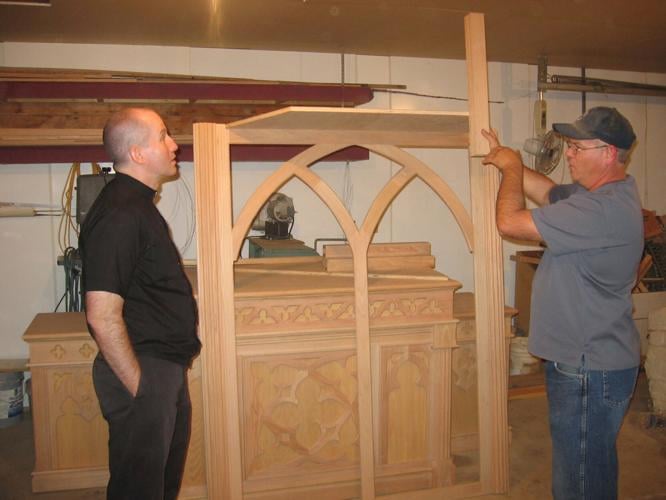 A Nebraska priest who was in Washington, D.C., at a Jan. 6 rally in support of then-President Donald Trump told a videographer that he had performed an exorcism at the U.S. Capitol because a demon is “dissolving the country.”

The Rev. David Fulton, a pastor at St. Michael in Central City and St. Peter in Fullerton, was featured in a video shot by Eddie Becker on YouTube called “Voices from the Capitol Insurrection.” It shows snippets of a five-minute conversation between Becker and Fulton.

Fulton is shown standing in a street with the U.S. Capitol in the background and a large crowd milling around, waving Trump flags.

Fulton didn’t return several phone calls and emails asking for comment. Deacon Tim McNeil, the chancellor for the Archdiocese of Omaha, said Friday that Fulton’s opinions do not reflect the views of the archdiocese.

McNeil said Fulton was given no sanctions or punishments for attending the rally or purporting to perform an exorcism. McNeil noted that Fulton is not a trained exorcist.

“Fulton did not break any civil or ecclesial laws while in Washington, D.C.,” the archdiocese said in a statement. “He attended the rally as a private citizen.”

McNeil said, however, that Omaha Archbishop George Lucas is “very upset” with Fulton and said Fulton should not have been at the rally.

“He should not have been there dressed as a priest. It was a misuse of his priestly ministry,” said McNeil, relaying Lucas’ comments.

Thirty minutes after this article was posted on Omaha.com, McNeil sent an additional comment from Lucas: “Whether or not Fr. Fulton broke any laws, I condemn his participation in the event in the strongest terms.”

Thousands of people attended the Jan. 6 rally near the White House at which Trump exhorted the crowd to “take our country back” and demand that Congress not certify the Electoral College vote affirming the election of President Joe Biden. Many then walked to the U.S. Capitol, where a mob stormed the building. More than 140 police officers were injured and five people died.

Becker, a D.C.-based filmmaker, said he spoke to Fulton about 3:25 p.m. Jan. 6. Fulton was on the west side of the Capitol walking away from it while Becker was heading toward the Capitol. According to the New York Times’ timeline of the siege on the Capitol, the first barriers were breached at 12:53 p.m. and rioters broke into the building about 2:11 p.m.

In the video, Fulton, with his clerical collar visible, says he is a “Roman Catholic” from Nebraska. He holds up a book called “Minor Exorcisms and Deliverance Prayers in Latin and in English.”

“Got this going,” Fulton says, holding up the book. “Got these exorcism prayers going, there’s priests that’re using them.”

In the entire videotaped conversation, Fulton describes the crowd and atmosphere as “awesome.”

In the video, Becker asks Fulton if he performed an exorcism at the Capitol. Fulton responds, “Yes, I did.” Becker then asks what it was like and Fulton says, “We’ll see, we’ll see what effect ...”

Fulton goes on to talk about a demon that has possessed the Capitol and satanic cults that he said he learned about on YouTube.

Fulton said he learned about the demon from priest and exorcist Chad Ripperger’s YouTube videos.

Ripperger himself has Nebraska ties. He spent a year at Immaculate Conception Church in South Omaha, went to St. Gregory the Great Seminary in Seward for four years, then taught at Our Lady of Guadalupe Seminary in Denton for six years, according to biographical information about him on a church website. The seminary in Denton is the main seminary in the United States for the Priestly Fraternity of St. Peter.

News spread this week that a Wisconsin priest had left the Madison Catholic Diocese after performing livestreamed exorcisms to root out what he called widespread fraud from the Nov. 3 election.

According to Fulton’s biography, which is on the website of one of his former parishes, he took part in the Omaha Archdiocese seminary program and was ordained in 2002. He has been assigned to several parishes throughout Nebraska: St. Leo in Omaha, St. Bonaventure in Columbus, St. Joseph in Constance, St. John the Baptist in Fordyce and St. Boniface in Menominee. In addition to being the pastor at the two rural central Nebraska parishes, he serves as the administrator of St. Peter in Clarks.

Fulton presided over Mass on Jan. 3 and Jan. 10 at St. Michael’s, according to videos of the services posted on Facebook. The most recent video of Fulton on the church’s Facebook is from Thursday night, when he led a Rite of Christian Initiation of Adults class. He was wearing the same coat as he did in the Jan. 6 video.

McNeil said someone told the Archdiocese of Omaha about Fulton’s attendance at the D.C. event a few days after Fulton returned to the state. Church officials asked Fulton directly if he had entered any government building illegally, and Fulton said he had left the Capitol before the violence occurred and didn’t know about it until he returned to his hotel.

When officials later learned that Fulton was on video saying he had performed an exorcism, they asked Fulton about that.

“The Rite of Exorcism may only be performed by a priest duly trained and appointed by his bishop,” the archdiocese said in a statement. “Fr. Fulton has since clarified that, contrary to his YouTube interview, he did not attempt a formal exorcism, but led others in prayer. Fr. Fulton should not have claimed to have special and particular knowledge about demonic activity.”

McNeil said church officials believed the comments Fulton made to them over the ones he made on the video.

In the Jan. 6 video conversation, Fulton said he didn’t know much about QAnon, the far-right internet conspiracy theory alleging that Satan-worshipping pedophiles run the world and are against Trump.

“I really don’t know about QAnon because it’s like, um, which ones are really from QAnon and which are fake, it’s really tough to tell,” he said. “It’s tough to really take any of the information to heart.”

“If you look at what’s happening in the country, same thing happening in the Catholic church,” Fulton said. “We have the same type of people, liberal progressives, trying to destroy from within.”

When Becker asks for Fulton’s name, Fulton looks at a man who is standing next to him. McNeil, who reviewed the video, said he didn’t recognize the man as anyone connected to the Archdiocese of Omaha.

“Shouldn’t dox myself? Yeah, I’m not gonna dox myself,” he said, referencing a term meaning to publicly identify and publish information about a person, usually in a malicious way.

“He’s a good man, he’s a holy priest,” the unidentified man tells the videographer. “Pray for all good holy priests.”

Fulton then declines to give his name and repeats only that he is from Nebraska.

In Nebraska, Jan. 6 brought several hundred people to the steps of the State Capitol in support of President Trump’s effort to overturn the results of the election. It was a contrast to the three men gathered there Wednesday.

The race to replace Ricketts: Who's in, who's thinking, who's out of campaign for governor

It's not yet clear whether Gov. Pete Ricketts will seek another office or reclaim his private life. It's even harder to tell who might replace him, but here are the names being talked about most.

The D.C. videographer who interviewed the Nebraska priest near the U.S. Capitol posted the full interview online in response to comments made by the priest on Sunday.

Mother and son from Iowa arrested in U.S. Capitol insurrection

Deborah Sandoval of Des Moines and Salvador Sandoval Jr. of Ankeny, Iowa, made their initial appearances in federal court Friday, according to a press release from the FBI's Omaha field office.