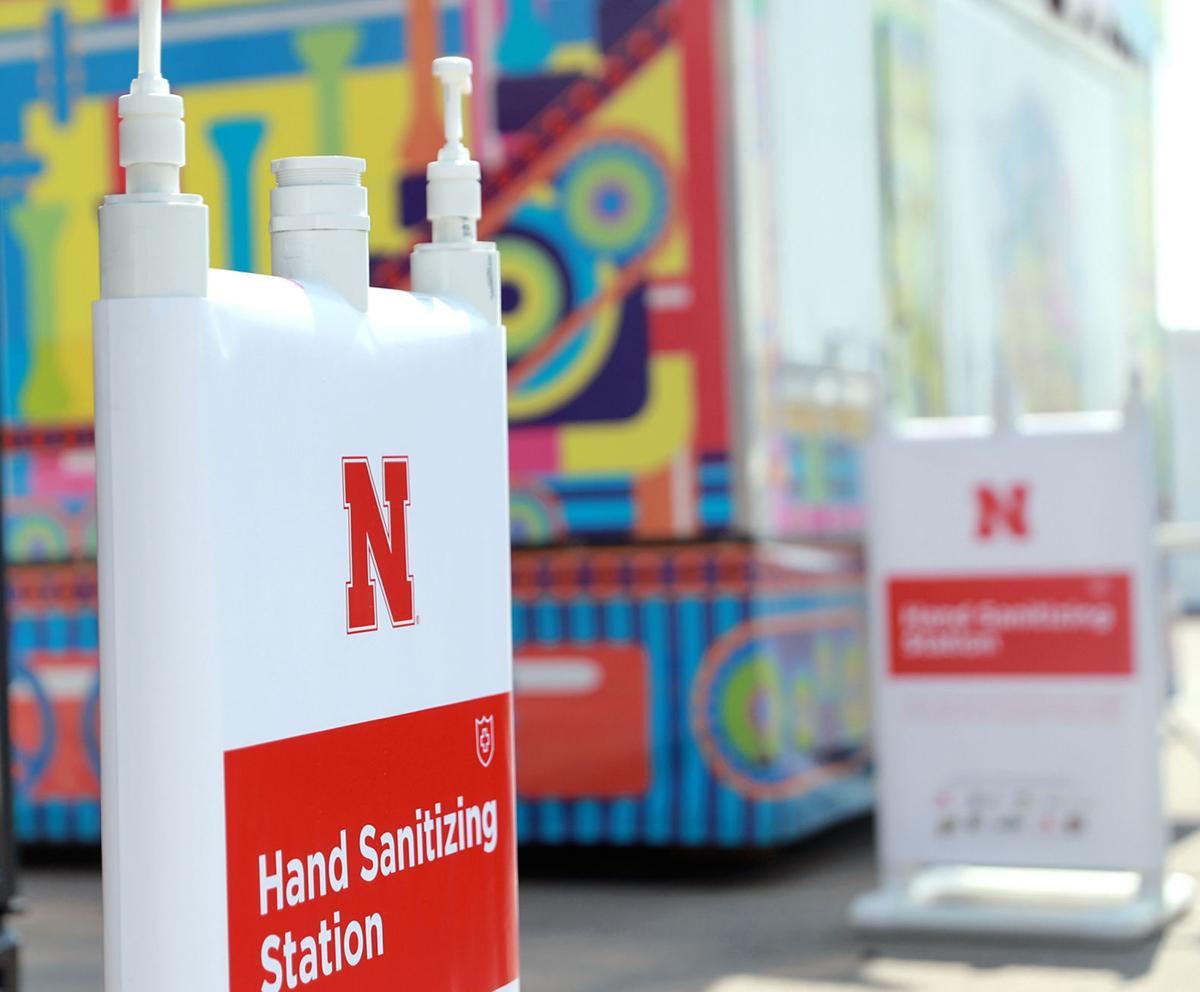 Hand sanitizer stations from the University of Nebraska can be found throughout the grounds. Fair officials recommend that people social distance and wear masks, however, masks are not required.

Jaime Parr, the director of sales, and Bill Ogg, the executive director of the State Fair, are ready for the 2020, minimized edition of the Nebraska State fair. Hand sanitizer stations are scattered throughout the grounds and guests are encouraged to wear masks and social distance.

GRAND ISLAND, Neb. — It was a bittersweet beginning to the Nebraska State Fair for Andrea Mack on Friday morning.

Mack typically would be baking pies and bread, canning jellies and entering her best garden vegetables in fair competitions, or helping her two teenage sons prepare to defend their titles in a State Fair cooking contest.

Instead, she was wandering through a playground outside the Nebraska Game and Parks pavilion checking out the toll the coronavirus pandemic has taken on the 151-year-old fair as her 5-year-old daughter Willa climbed on a sun-bleached log.

This year, there are no baking or jelly contests to enter. No Ferris wheel or other carnival rides. No daily parades or big-name concert performers. There’s only about a third of the usual funnel cake and corn dog stands, and only one-tenth of the commercial booths pitching products from miracle cleaners to waterless cooking utensils.

“This is my absolute, favorite time of the year. … The people, the excitement, so many things to do,” Mack said. “I’m so sad.”

But, like the State Fair itself, Mack is planning to make the best of it.

The fair officially opened Friday evening — hours after Mack’s stroll through the grounds — for its pandemically downsized state celebration, which continues through Labor Day, Sept. 7.

The Nebraska State Fair is still a go, but expect big changes

Unlike several states, including Iowa, Nebraska decided to forge ahead with its State Fair, albeit without the broad array of entertainment, competitions and belly-busting foods. Instead, the focus is on the traditional heart of the fair, the 4-H and FFA youth livestock exhibits and shows. About 3,500 4-H’ers are expected this week — fewer than normal — and a slightly smaller number of FFA exhibitors are anticipated over the Labor Day weekend.

One hundred hand-sanitizing stations, donated by the University of Nebraska-Lincoln, are scattered about the fairgrounds as part of several precautionary measures, which also include social distancing steps and signs strongly encouraging the wearing of face masks, which are provided for fairgoers who want them.

Bill Ogg, the fair’s new executive director, said officials have been conferring for several weeks with state and local health officials on how to safely conduct a slimmed-down fair. There was also time spent determining what events could be held, and which ones couldn’t, given the expectation that revenues will be down. He said the fair is hoping for 10% of its normal attendance, or about 30,000 people.

“We want people to come and celebrate the good things Nebraska has, and feel comfortable that they can do this safely,” Ogg said.

The initial reviews were positive.

“I’m really happy that they’re having the livestock shows,” said John Greer of Edgar, as he sat in his pickup after unloading lambs being shown by two grandsons, Marshall and Camden Humphrey of Giltner.

At this year’s fair, there still will be anxious moments in front of stern judges and the awarding of ribbons, but there will be no monetary premiums (or prizes), to save money because, unlike past years, admission and parking are free.

Greer said that life on the farm has been “business as usual” for the most part — livestock and crops keep growing despite the pandemic.

“You just have to be careful,” he said, adding that he just learned that a granddaughter attending the University of Nebraska-Lincoln has tested positive for COVID-19.

Dustin Beener, whose family has run food stands at local and state festivals since 1913, estimated that he’s lost 82% of his normal income this year due to the closure of so many events because of the coronavirus. He brought three workers from his home base in Urbandale, Iowa, to the Nebraska State Fair, about a fourth of his usual workforce.

Still, he said a recent “taste of the fair” event at the Iowa State Fair — which featured fair food without any other fair events — went “really, really, really well.” Sales were strong, and tips were more generous than normal.

“It’s definitely brought out the heart in people,” Beener said.

Here’s what you can expect at the Nebraska State Fair:

“It’s eat or be ate,” said 24-year-old Sage Seay, a former outside linebacker from McNeese State University in Louisiana who is ranked No. 1 in the nation in this adrenaline-pumping sport. His signature move: a “mercy roll” that involves leaping over the horns of a charging bull.

Two Nebraskans will compete in the mayhem, Zach Call of Mullen and Beau Schueth of O’Neill.

Attendance, because of the pandemic, will be limited to 75% of capacity, or about 3,000 in an outdoor arena.

GRAND ISLAND, Neb. — Ten food vendors and 20 commercial vendors will be on hand for this year’s Nebraska State Fair.

Medical marijuana initiative should be on the ballot, Nebraska secretary of state rules

Secretary of State Bob Evnen has ruled that a medical marijuana initiative should be placed on the Nov. 3 ballot, though he said Thursday that he had "no doubt" that his decision will be challenged in court.

Virtual hearings have been scheduled for the public to comment on how TC Energy will deal with water crossings for its Keystone XL oil pipeline. Testimony at all three hearings will be via telephone.

Gerry Oligmueller, the longtime chief of the state budget office, is retiring, and Mark Quandahl, the state banking director, will step down next month.

Phase 3 coronavirus restrictions, which were scheduled to expire Aug. 31, are being extended through Sept. 13 in 66 Nebraska counties, including Douglas and Sarpy.

Nebraskans for Medical Marijuana said Wednesday that they have enough signatures to get their initiative on the November ballot, but the initiative is expected to be challenged in court.

Backers of petitions that would allow casino gambling at racetracks have asked the Nebraska Supreme Court to review the secretary of state's decision not to put the petitions on the November ballot.

Most of the animals are in pastures or pens in Phelps County, Sheriff Gene Samuelson said, but a few still were out in Phelps, Furnas, Harlan and Gosper Counties.

If you’re looking for a way to celebrate the federal holiday that honors the American Labor movement with the entire family, check out these upcoming socially-distant events.

The State Fair's former chief of finance, Patrick Kopke, has been charged with three counts of theft by unlawful taking totaling $5,000 or more, a felony.

Nebraskans who entered the tree-bombing contest were “super creative,’’ a fair official said. “People really put a lot of time and energy in it.’’

Where to find these 9 state fair foods in Omaha

Miss food on a stick? You can get fried Oreos, chocolate-covered bacon, churros and mini donuts at these Omaha spots.

A group of prominent Nebraskans has fired several criticisms at a state board that hands out grants for environmental projects. They say one of the board's recent decisions might be illegal.

Hand sanitizer stations from the University of Nebraska can be found throughout the grounds. Fair officials recommend that people social distance and wear masks, however, masks are not required. 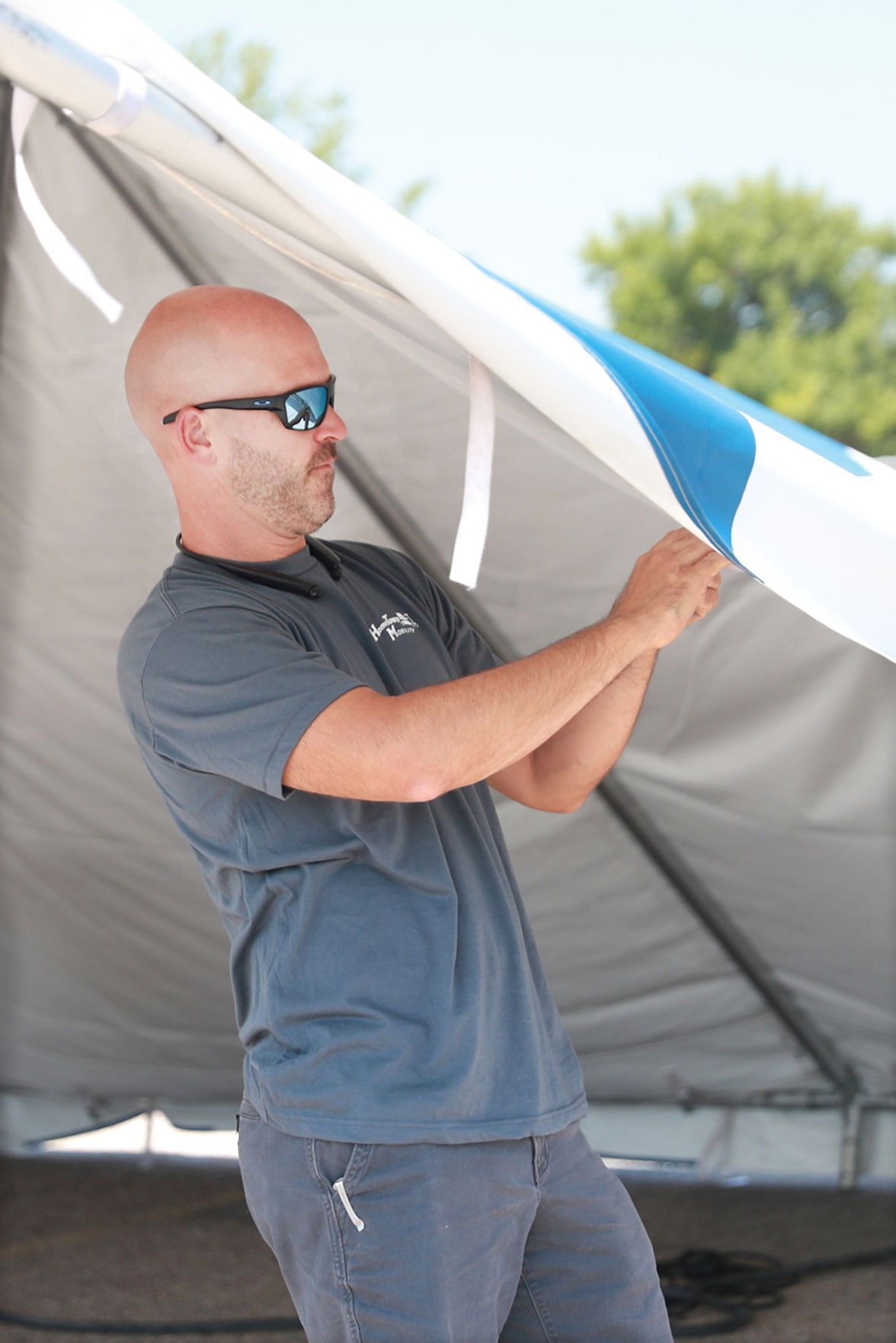 Chad Schlumbaum sets up a tent for Hometown Mobility at the Nebraska State Fair. The State Fair opened Friday. The fair will be free admission for all who visit the minimized event.

Jaime Parr, the director of sales, and Bill Ogg, the executive director of the State Fair, are ready for the 2020, minimized edition of the Nebraska State fair. Hand sanitizer stations are scattered throughout the grounds and guests are encouraged to wear masks and social distance.