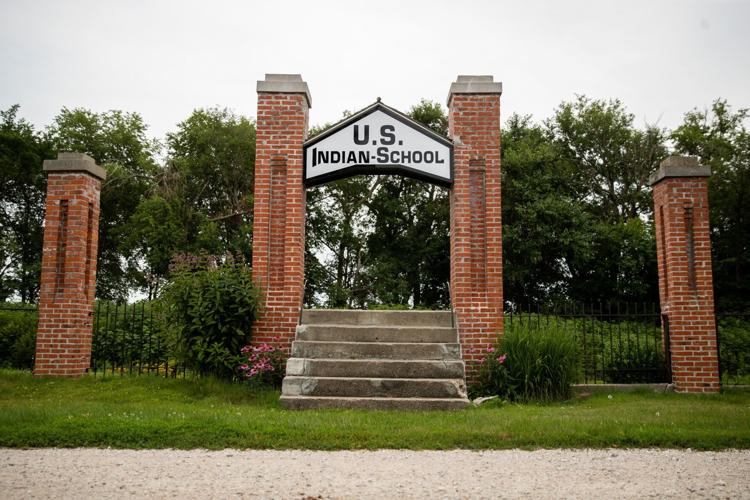 A portion of the steps and gate at the Genoa U.S. Indian Industrial School campus in Nebraska still stands. A search for graves is ongoing at the site, long believed to have been Nebraska's only government-run Indian boarding school. 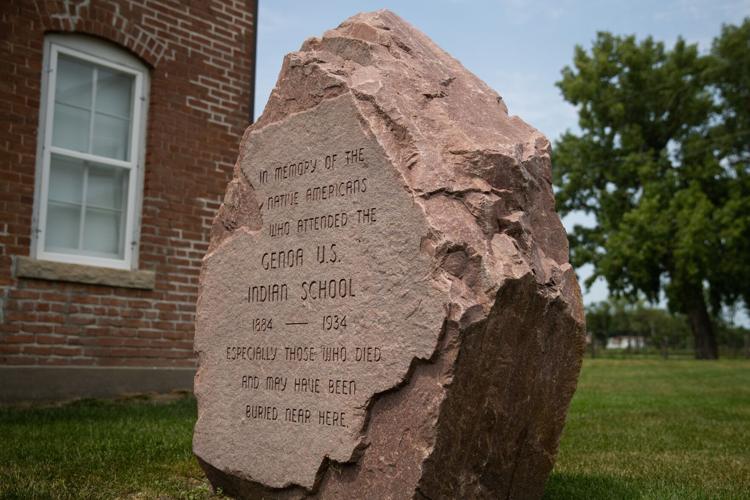 A stone commemorates the unknown number of Native American children who died at the Genoa U.S. Indian Industrial School in the late 19th and early 20th centuries. 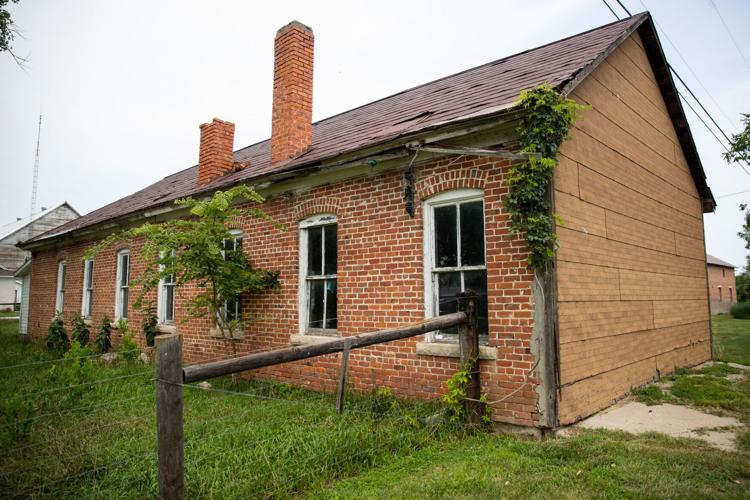 A blacksmithing building still stands from the Genoa U.S. Indian Industrial School, which operated from 1884 to 1934. The building is now privately owned.

A newly released federal report has documented the existence of eight additional Native American boarding schools that once operated in Nebraska with the goal of stripping Indigenous children of their language and culture in the name of assimilation.

The findings in the much anticipated study, which greatly expanded the previously understood scope of the schools across the U.S., come as Nebraska officials push ahead with a painstaking search for graves near the former Genoa U.S. Indian Industrial School, which operated about 115 miles west of Omaha.

The first installment of the massive report by the U.S. Interior Department identified more than 400 of the government-supported schools and more than 50 associated burial sites, a figure expected to grow as research continues.

The U.S. institutions served as a blueprint for Canada’s Indigenous residential schools, where the recent discovery of hundreds of Indigenous children buried in unmarked graves brought renewed attention to practices that have been described by historians as cultural genocide.

Shortly after the human remains were discovered in Canada, U.S. Secretary of the Interior Deb Haaland announced the Federal Indian Boarding School Truth Initiative, an effort that led to the initial report released Wednesday.

The federal investigation has so far identified more than 500 deaths at 19 schools, though the Interior Department said that number could climb to the thousands or even tens of thousands.

The department has so far found at least 53 burial sites at or near the U.S. boarding schools, both marked and unmarked.

In Genoa, a search for graves is ongoing — as is an effort to identify children who died at the school. So far, the number of confirmed deaths is 86.

Judi gaiashkibos, executive director of the Nebraska Commission on Indian Affairs, said the report offers a wide view of the reality students of the schools faced.

“It’s quite a report. I feel like we always knew a lot of this story, but to see what a wonderful job they did in putting this report together, that really has given me a sense of pride in our leadership with Deb Haaland at the helm,” gaiashkibos said.

A descendant of a Genoa school student, gaiashkibos has led efforts to find the Genoa school graves along with the Nebraska State Archaeology Office.

Originally believed to be the fourth federal boarding school built in the U.S., the Genoa school operated from 1884 to 1934. At its peak in 1932, the school’s campus housed 599 students, who ranged in age from 4 to 22 years old and came from more than 40 tribes.

The U.S. government directly ran some of the boarding schools, like the one in Genoa. Catholic, Protestant and other churches operated others with federal funding, backed by U.S. laws and policies to “civilize” Native Americans.

The institution had to have provided housing, provided education, received federal support and operated any time prior to 1969.

Besides Genoa, eight institutions in Nebraska met the criteria:

» Iowa Industrial School, possibly also known as the Orphans Industrial Home, was in a historical settlement called Nohart in the southeast corner of the state. The institution was believed to have opened as early as 1873 and closed around 1881.

» The Omaha Indian School in Macy is believed to have operated from 1873 to roughly 1906.

» The Omaha Mission, located in Omaha, served as a “contract mission boarding school,” according to a report that includes information from the Presbyterian Board of Foreign Missions. The school is believed to have operated from 1886 to 1891.

» The Otoe Missouria Indian Mission School is believed to have operated on the Big Blue Reservation in Gage County from roughly 1854 to 1881. The institute was moved with the tribe from Nebraska to Red Rock, Oklahoma, in 1881. There it operated until 1919 under the name Otoe Boarding School.

» Santee Industrial School was a government reservation boarding school that operated near Niobrara from roughly 1874 to 1909.

» Santee Normal Training School in Santee operated as a contract mission boarding school. Research suggests the school was founded to train native teachers in 1871. In 1893, the school’s government contract was terminated and the American Missionary Association operated the school until 1937.

At one time the institution consisted of 18 buildings, and 480 acres of land, and enrollment exceeded 200. Researchers found that the school taught Dakota students in their native language and published literature in the Dakota language, which may have resulted in a loss of funding.

» Silver Ridge Seminary is believed to have operated from roughly 1874 to 1886 in what is today Dixon County.

» The Winnebago Boarding school is described as a government reservation boarding school that operated in Winnebago, Nebraska, from roughly 1873 to 1891.

Beyond identifying the schools, the report described next steps the Interior Department will take in creating a second volume of the study, aided by a new $7 million investment from Congress.

A bill introduced in the U.S. House last year would create a truth and healing commission modeled after one in Canada. Several church groups are backing the legislation.

Nebraska lawmakers in January, through a legislative resolution, established a day of remembrance and officially acknowledged the physical and emotional abuse that students were subjected to at the Genoa school.

Next steps by the Interior Department will likely include compiling a list of marked and unmarked burial sites at the schools, an approximation of the total amount of federal funding used to support the federal Indian boarding school system, and further investigation to determine the impacts of the school system on Native communities today.

A second volume of the report will cover the burial sites as well as the federal government’s financial investment in the schools and the impacts of the boarding schools on Indigenous communities, the Interior Department said.

In Nebraska, the search for the Genoa school graves will continue with another search effort planned for later this month.

“We’re going to exhaust every possible measure to find those children,” gaiashkibos said.

This report contains material from the Associated Press.

The resolution acknowledges survivors of the Genoa Indian School, their descendants and establishes Feb. 20 as an annual day of remembrance in Nebraska.

Organizers last week turned to a specially trained dog team in the painstaking search for the Genoa Indian School cemetery. Within hours, the dogs identified a possible location.

A portion of the steps and gate at the Genoa U.S. Indian Industrial School campus in Nebraska still stands. A search for graves is ongoing at the site, long believed to have been Nebraska's only government-run Indian boarding school.

A stone commemorates the unknown number of Native American children who died at the Genoa U.S. Indian Industrial School in the late 19th and early 20th centuries.

A blacksmithing building still stands from the Genoa U.S. Indian Industrial School, which operated from 1884 to 1934. The building is now privately owned.