An Offutt-based reconnaissance jet suffered $125,000 in damage when it scraped two of its four engines on the runway of an air base in England Sept. 7, the 55th Wing has confirmed.

The RC-135U Combat Sent aircraft, bearing the call sign JAKE31, was returning to RAF Mildenhall from a 6-hour, 19-minute flight around Russia’s Kaliningrad district when it dipped to the left and scraped its two left-wing mounted engines on the runway.

As the jet neared touchdown at 2:25 p.m. local time, the pilot encountered a moderate crosswind of 10 knots (11 mph) from left to right, according to the pilot’s post-flight aircraft incident worksheet, obtained by The World-Herald using the Freedom of Information Act. The power setting had been set to idle for landing.

“Crosswind controls were released and the #1/#2 engines contacted the runway,” the pilot wrote in the report.

Airshow World, a British YouTube channel popular with aviation enthusiasts, captured the shaky landing while filming video of aircraft takeoffs and landings. Two weeks later, it was picked up on Twitter and was the subject of two posts on the military blog The War Zone.

“I did think for a moment that (the landing) was going to go wrong,” wrote Airshow World’s Stu Bear, who filmed the incident, in the site’s comments section. “My heart was in my mouth.”

The video — which has been viewed more than 500,000 times — shows the jet descending toward Mildenhall’s Runway 28 at a slight angle into the wind, a crosswind-landing technique called “crabbing.” Typically, just as the plane touches down, the pilot uses the plane’s tail rudder and wing ailerons to straighten the aircraft.

JAKE31’s touchdown is partly obscured by a small building and a slight rise in the runway, but the left wing dips sharply and a cloud of smoke spurts up from the tires. The plane wobbles and briefly appears as if it might flip over before the pilot skids down the runway, recovers and taxis past the camera, without visible damage.

The video of the landing stirred up plenty of chatter among former 55th Wing pilots. Robert Hopkins III, a former RC-135 pilot during the Gulf War and historian of Air Force reconnaissance flights, called it “an awful landing.” He thought the pilot should have abandoned the approach, circled around and tried again.

“I think the pilot (who was) flying flared high, realized it, then pushed the nose over to try and land,” he said. “The best thing to do in a premature flare in a crosswind is to go around. Never push the nose down.”

For retired Brig. Gen. Reg Urschler, a former 55th Wing commander, the video brought to mind landings at Shemya, in Alaska’s Aleutian Islands, where RC-135 pilots had to navigate stronger crosswinds in worse conditions than those seen in the RAF Mildenhall video.

John Achor, 87, of Elkhorn, piloted the RC-135 during a career with the Strategic Air Command that stretched from 1956 to 1976. He is credited with saving the lives of 18 crew members aboard an RC-135S Rivet Ball in 1969 when it skidded while landing on an icy runway at Shemya.

“I wouldn’t begin to second-guess the pilot,” said Achor, who now writes mystery novels. “If you walk away from a landing, it’s a good one.”

The RC-135U is one of 26 RC-135-variant jets in the 55th Wing fleet, all of them based at Offutt. They frequently conduct their missions from deployed locations overseas, including RAF Mildenhall.

In the 2000s, nearly all of the planes received upgraded CFM56 engines, which are quieter and more fuel-efficient. They also are much larger, which pilots say means it is also easier for them to scrape the runway in a wobbly landing.

The aircraft involved in the rough landing Sept. 7 — tail number 64-14849 — is one of only two that flies the 55th Wing’s electronic intelligence-gathering mission called “Combat Sent.”

Combat Sent aircraft are equipped with an array of antennas designed to trigger and monitor the radar systems of U.S. adversaries. The plane was delivered to the Air Force in February 1965 and carries a crew of 23.

The two Combat Sent planes are also known for the fierce-looking “shark’s mouth” painted underneath the nose.

JAKE31 and its crew deployed to RAF Mildenhall Aug. 13. The aircraft had flown at least three previous missions circling Kaliningrad, a small Russian administrative division on the Baltic Sea that is sandwiched between Poland and Lithuania and is geographically separated from the rest of Russia. It also flew at least one mission near Murmansk, a port with naval facilities in the Russian Arctic.

Hopkins said Russia uses Kaliningrad to project power toward the United States’ NATO partners while protecting its own ally Belarus. As such, the enclave is the object of frequent surveillance by U.S. and British reconnaissance flights.

The plane didn’t fly again for six days following the pod strike, according to data from a flight-monitoring website, ADSBexchange.com, and provided to The World-Herald by Steffan Watkins, an Ottawa-based open-source research analyst.

After that, though, the plane and crew kept busy for the next month. It flew at least 15 additional flights, including monitoring operations near Libya and Syria, before returning home Oct. 18 to the 55th Wing’s temporary operating base at the Lincoln Airport.

This Offutt-based RC-135U Combat Sent aircraft, tail number 64-14849, struck two of its engines on the runway during a shaky crosswind landing Sept. 7 at RAF Mildenhall, England. The plane suffered $125,000 worth of damage. 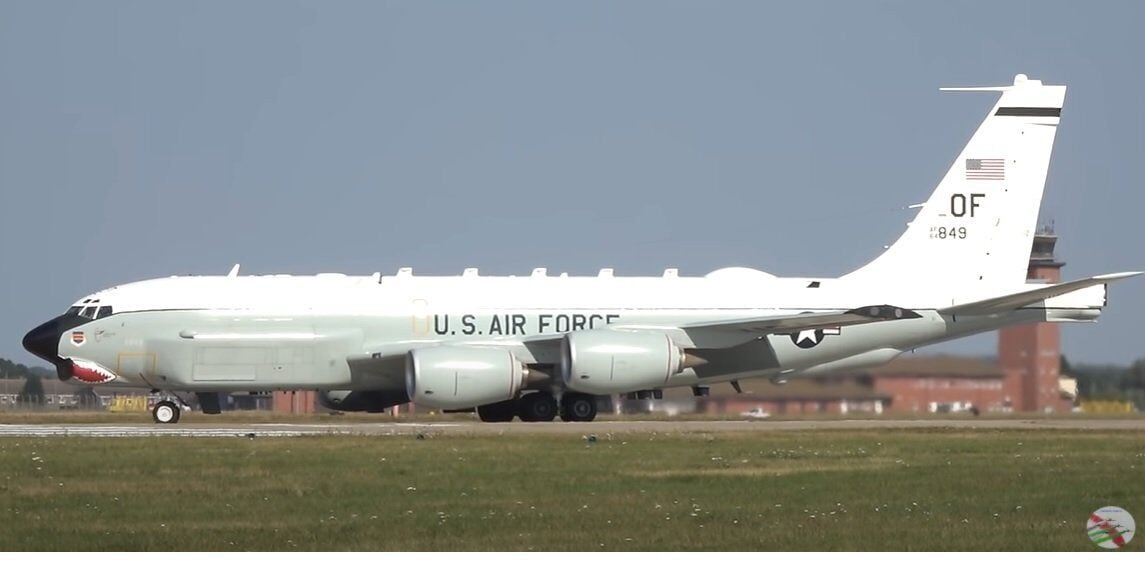 The Offutt-based RC-135U Combat Sent aircraft, tail number 64-14849, taxis out following a rough crosswind landing at RAF Mildenhall, England. The two engines on the left side scraped the runway, causing $125,000 worth of damage. The plane was back flying a week later. 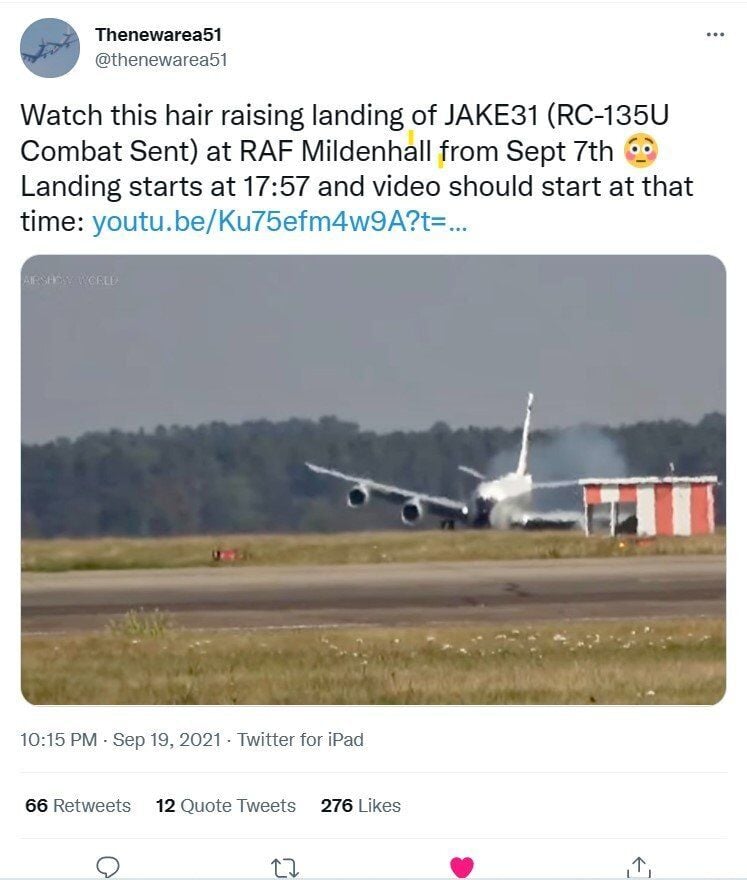 After Airshow World, a YouTube channel for aviation enthusiasts in Great Britain, posted video of the pod strike, and still photos and footage were picked up on social media. 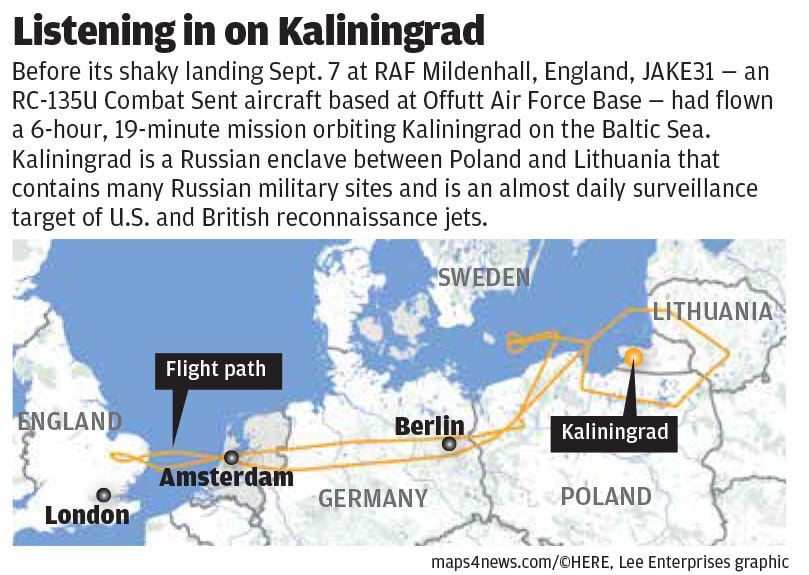