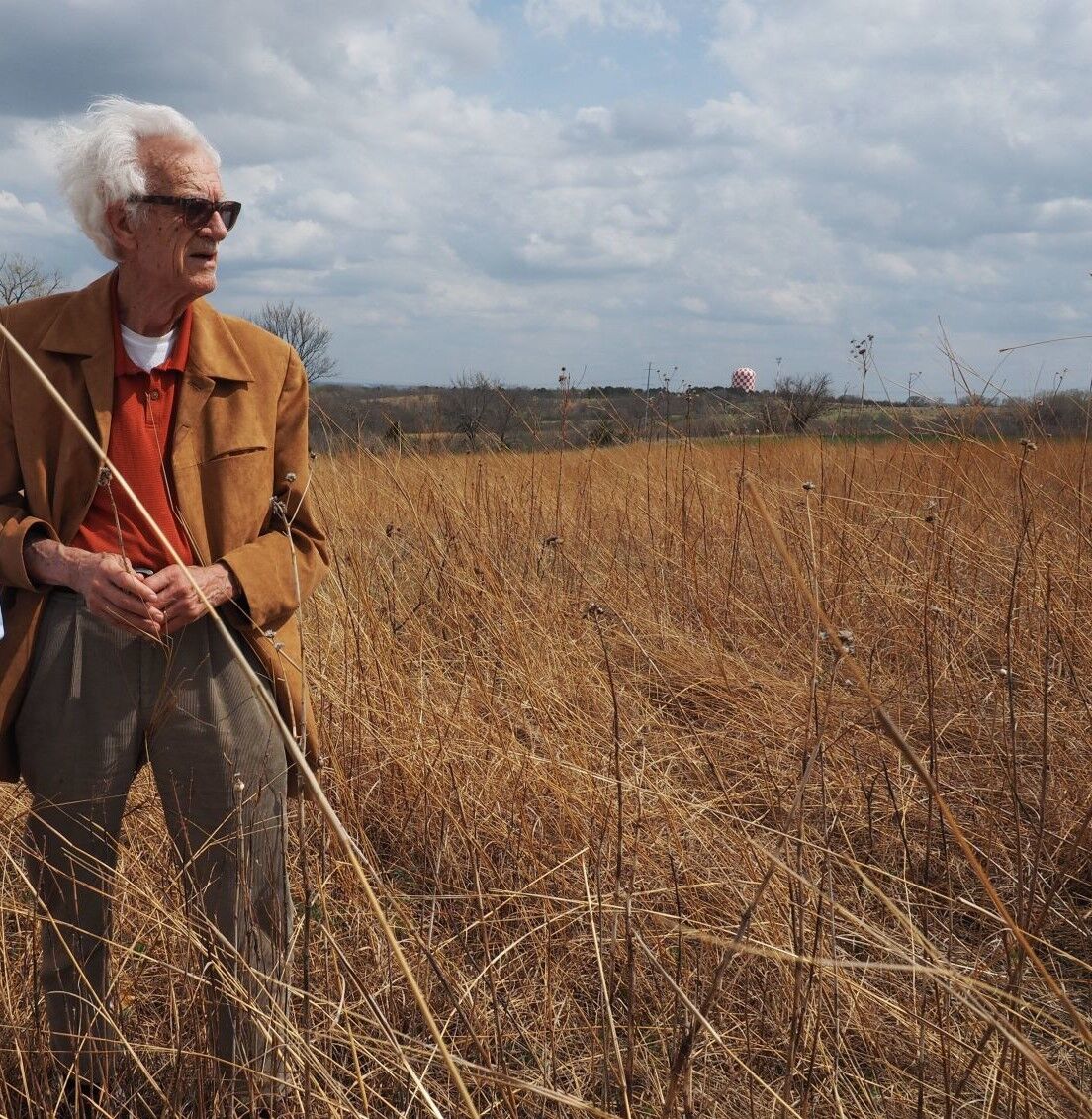 Paul Johnsgard chronicled the natural world of the Great Plains, especially its waterfowl. 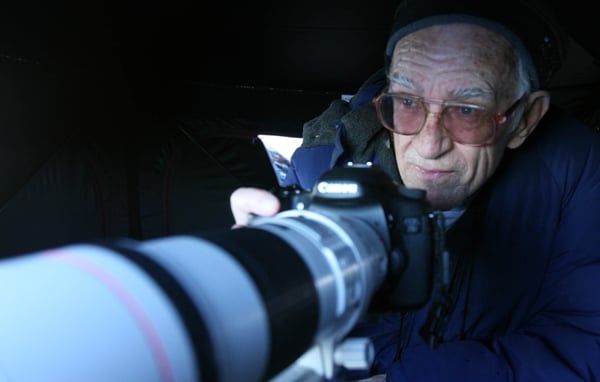 Johnsgard photographed sandhill cranes returning to their evening roosts from inside a tent blind set up on the Platte River in April 2011 near Alda, Nebraska. He is credited with bringing public attention to the cranes’ migration. 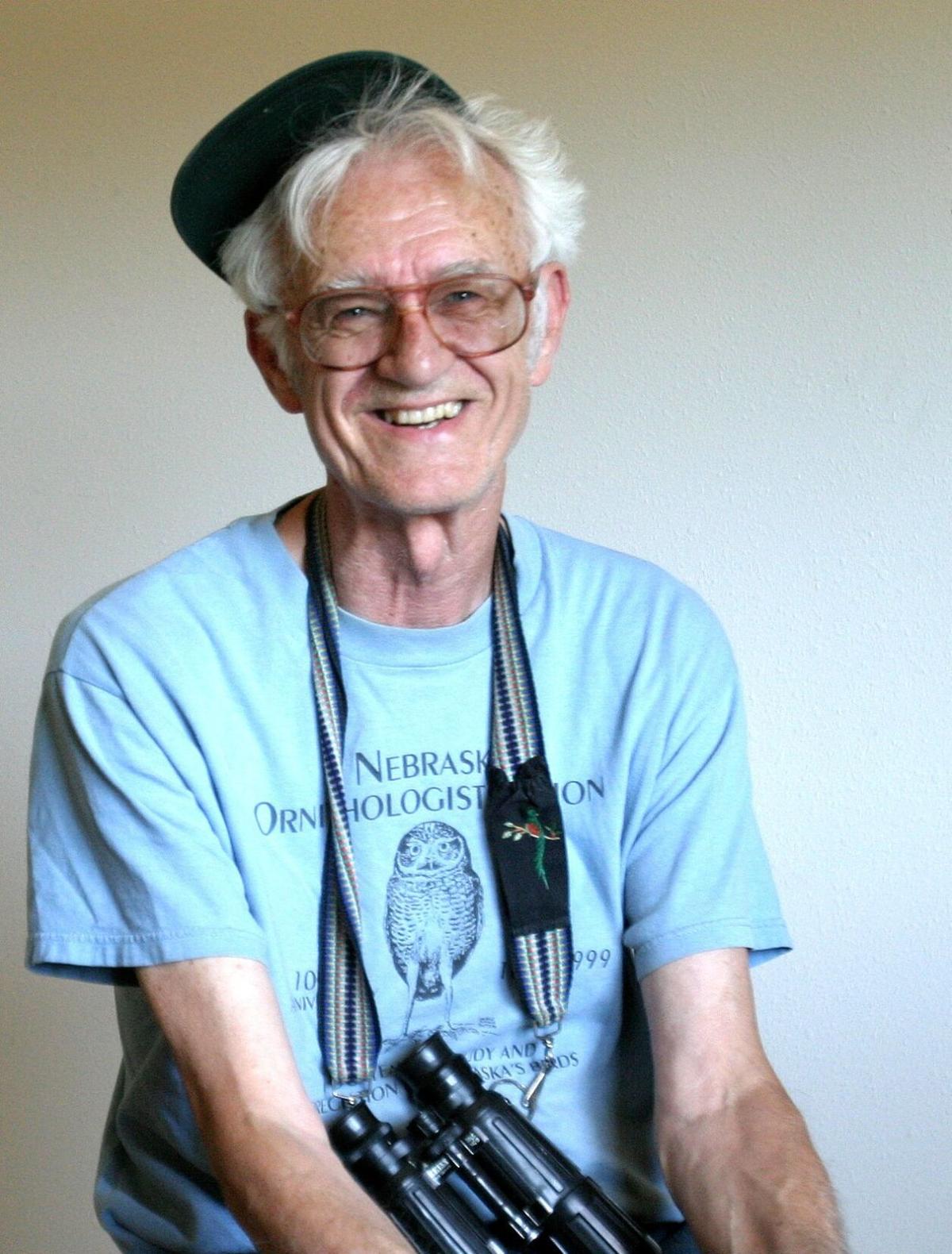 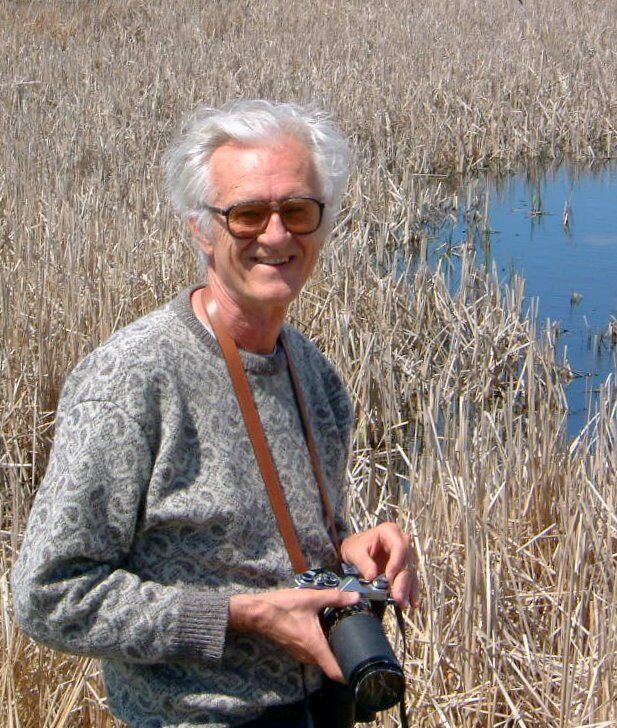 Paul Johnsgard. The naturalist’s decades of writing, photography, artwork and educational endeavors helped bring to the public consciousness the value of Nebraska wildlife. 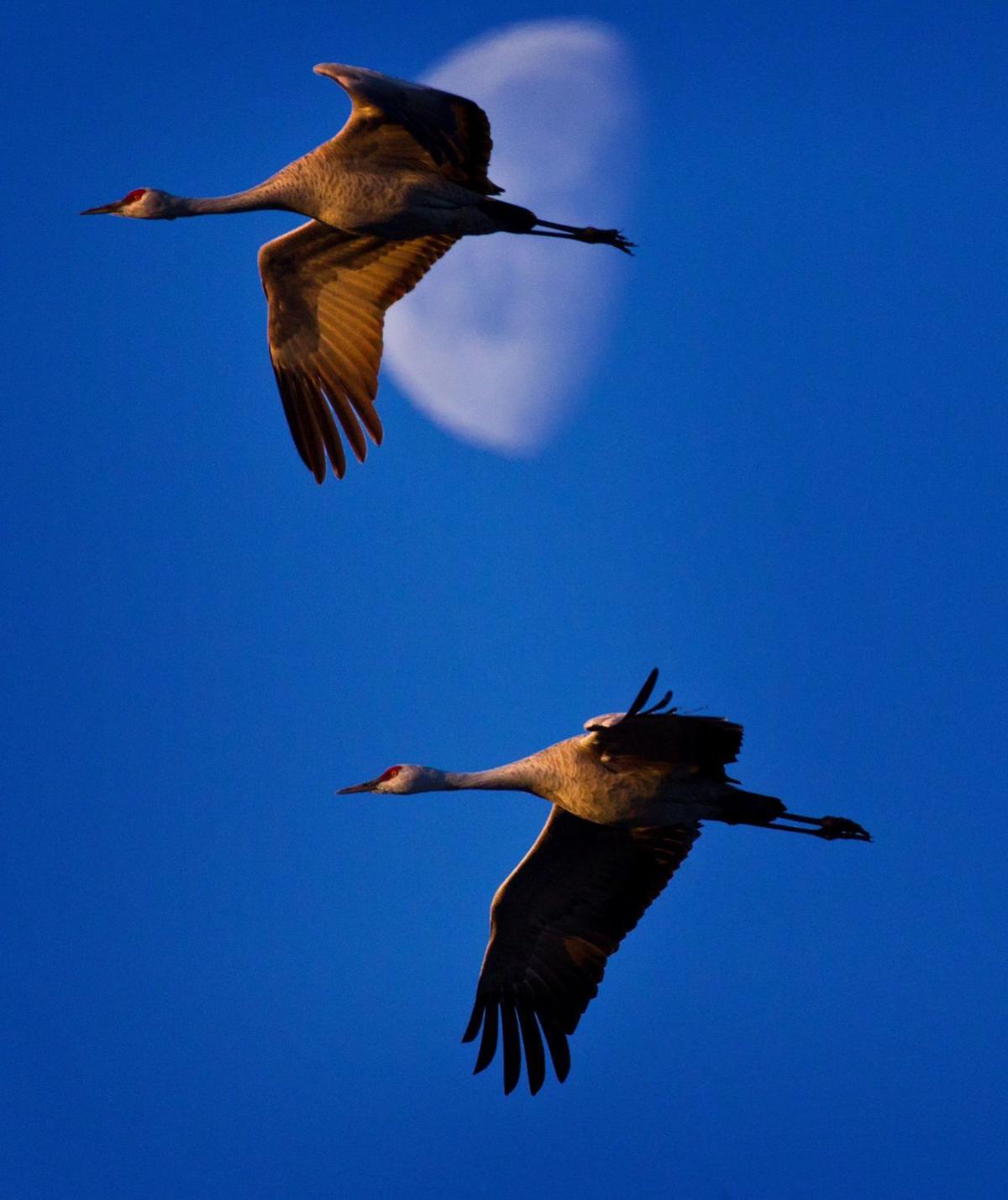 Paul Johnsgard's decades of writing, photography, artwork and educational endeavors helped bring to the public consciousness the value of Nebraska wildlife, especially the unique spectacle that is the sandhill crane migration.

Without Paul Johnsgard, Nebraska’s sense of itself wouldn’t be quite the same.

An internationally respected naturalist and ornithologist, Johnsgard wrote more than 100 books and numerous scholarly papers, many of them about the landscape and wildlife of his adopted home, Nebraska.

Johnsgard’s decades of writing, photography, artwork and educational endeavors helped bring to the public consciousness the value of Nebraska wildlife, especially the unique spectacle that is the sandhill crane migration. That, in turn, contributed to conservation efforts along the Platte River and a thriving tourism economy in central Nebraska.

“I don’t think you can overstate his role in bringing to public attention the sandhill cranes,” said Joel Sartore, a noted wildlife photographer. “It is arguably the biggest (wildlife) spectacle in North America, and Paul was instrumental in putting it on the map.”

Johnsgard died Friday at age 89. Even in his final days, he was overseeing the editing of his 105th book, “The Sandhill Crane State: A Naturalist’s Guide to Nebraska.”

A professor emeritus of biological sciences at the University of Nebraska-Lincoln, Johnsgard had taught 40 years at UNL, a place that he’d once believed would be a steppingstone.

Nebraska naturalists who have traveled the world say they’ve seen his books on shelves in South America, Thailand and England. There’s the story of the Brazilian ornithologist who credited Johnsgard’s books with setting him on his life’s path, and who “about fainted” when he had the chance to meet Johnsgard in Nebraska. Or the Idahoan, one of the world’s foremost authorities on the grouse, who brought out a dog-eared copy of a Johnsgard book on the bird, sat on the tailgate of a pickup and turned to the Nebraskan next to him and said reverently: “You know him?”

His books touched on a who’s who of Nebraska species and places: the snow goose, the grouse, the quail, the plover, sandpiper, snipe, the tall grass prairie, the short grass prairie, the Sand Hills, the Niobrara and the Platte River. He didn’t limit himself to Nebraska, and wrote books like “The Hummingbirds of North America.”

But even that canvas was too small. He also wrote books like “The Cranes of the World” or “The Quails, Partridges and Francolins of the World.”

Johnsgard’s approach to much of his writing was simple: If there wasn’t a book about a subject, he’d write it. In a short autobiography, he tells the story of how his book, “The Nature of Nebraska” came to be:

A fourth grade teacher from the small town of Elwood, Nebraska, had coaxed him into visiting her classroom (an enticing gooseberry pie was involved). When he saw her classroom’s “pitifully small library,” it reminded him of the paltry choice of books at his grade school in small-town North Dakota.

“On my long drive home, I vowed that I would write a book on the natural history of Nebraska that might be of value to teachers, students and the general public,” Johnsgard recalled. The book was published in 2001 and was dedicated to “the children of Nebraska, and especially the fourth-grade class at Elwood Public School.”

Authentic, kind and interesting is how people described Johnsgard, a man who didn’t put on airs. He made it a regular practice to spend time with kids.

Linda Brown, a longtime friend who helped him with his work, said Johnsgard would sit at the children’s table during Wachiska Audubon Society events at the local library and draw ducks with kids.

Another respected Nebraska photographer, Michael Forsberg, said Johnsgard never shied away from speaking out on behalf of the natural world, whether it was testifying in public hearings, writing editorials or speaking in public.

“He leaned into it,” Forsberg said. “He helped a lot of people feel like it was OK to say they care. ... I can’t imagine how many thousands of people whose lives he’s touched over the years in one way or another. He leaves behind a tremendous legacy.”

Johnsgard, who grew up in North Dakota, credits his mother and first grade teacher in encouraging his early interest in nature. His earliest memories, he wrote, were of gathering wildflowers for his mother. And he frequently recounted to family and friends how his first grade teacher kept a specimen of a red-winged black bird in a glass Victorian bell jar. The teacher opened the jar and gave young Paul a close-up chance to inspect it.

“He drew a picture of (that) red-winged blackbird, and I don’t think he ever looked back,” Brown said.

Johnsgard, like so many naturalists, found birds endlessly fascinating, spending thousands of hours in quiet observation. If you love birds, Forsberg said, “those hours don’t seem like hours at all, time flies.”

There was something that he actively and famously disliked: Nebraska football.

Johnsgard sported a cap that said “No Big Red” and took pride in holding football players to the same standards as his other students, something that he says angered the legendary coach Bob Devaney.

Devaney, according to Johnsgard, wrote him and the university president saying Johnsgard was to be denied for life the privilege of buying football tickets at Memorial Stadium.

“I considered it a badge of honor,” Johnsgard wrote in his biography.

Both The World-Herald and Lincoln Journal Star named Johnsgard as one of the 100 most influential Nebraskans of the 20th century, and he has been honored by several major conservation groups, including National Audubon Society, the American Ornithologists Society and National Wildlife Federation.

He is survived by his wife, Lois; daughters Ann Bouma and Karin Johnsgard; a son, Scott; six grandchildren; and four great-grandchildren. He was preceded in death by a son, Jay; and a grandson, Scott.

Growing up in the Johnsgard household meant being immersed in nature, his son Scott said. Mom was a scientist too, a botanist, but she devoted herself to raising her family.

Scott Johnsgard recalls how his dad encouraged him to collect, identify and catalogue things — leaves, stamps, shells, coins, matchbooks. All manner of wildlife, injured or orphaned, found their way to the family’s three-bedroom home to be rehabbed and released: exotic birds, reptiles, frogs, lizards, white footed mice, even a whippoorwill and a burrowing owl.

“In the modern world, we would be geeks, but our house was probably the one of the block you’d remember best,” he said. “It was chock-a-block full of stuff that was unusual.”

Services will be a 3 p.m. June 20 at the Unitarian Church of Lincoln, 6300 A St. To watch the service virtually, see roperandsons.com for details. Memorials can be directed to the Spring Creek Audubon Society or Rowe Sanctuary.

Nebraska can best honor his legacy by nurturing the next generation of naturalists to build on his important work.

The once-threatened species is doing so well in Nebraska that the Game and Parks Commission will consider a hunting season at its Friday meeting in Chadron.

A labor of love: Bringing Friend's 1886 Opera House back to life

Longtime efforts to renovate a second-story Opera House in Friend, retaining a piece of history and creating a new community gathering place, have gained momentum.

Paul Johnsgard chronicled the natural world of the Great Plains, especially its waterfowl.

Johnsgard photographed sandhill cranes returning to their evening roosts from inside a tent blind set up on the Platte River in April 2011 near Alda, Nebraska. He is credited with bringing public attention to the cranes’ migration. 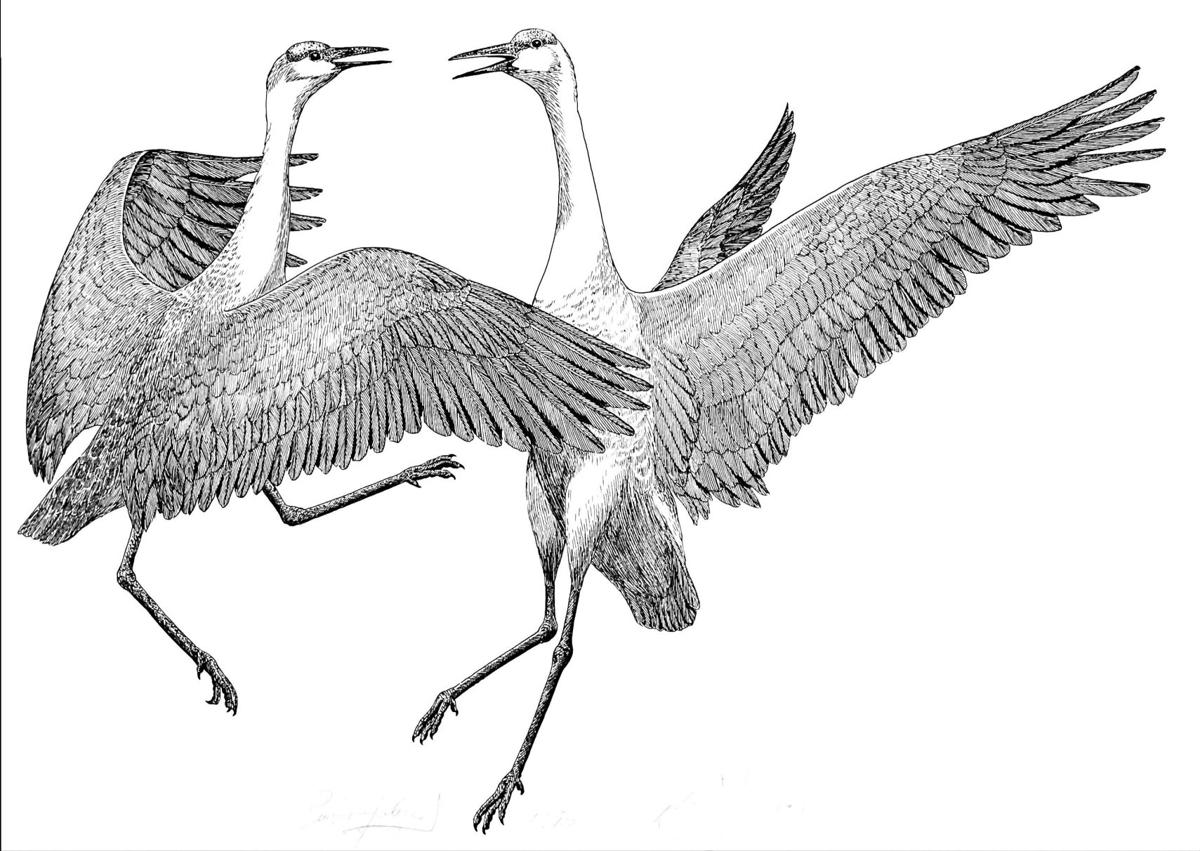 Ornithologist and naturalist Paul Johnsgard was a prolific writer and did many of his own drawings, including this sandhill crane. 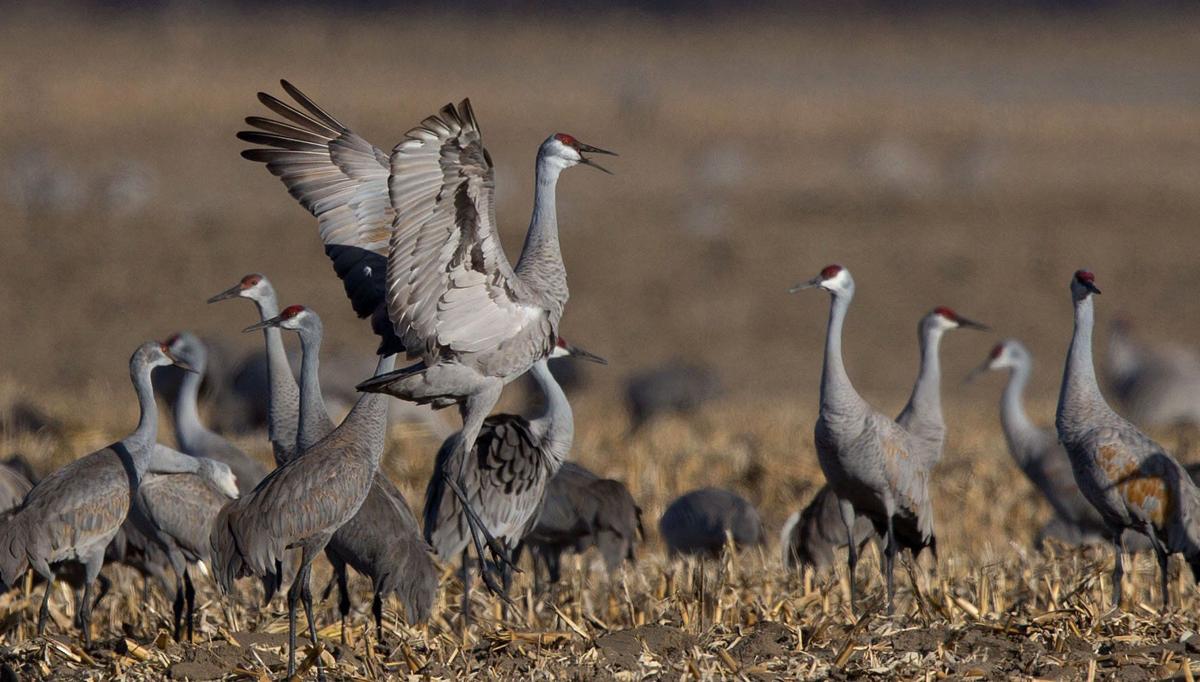 "I don't think you can overstate his role in bringing to public attention the sandhill cranes," Joel Sartore, a noted wildlife photographer, said of Paul Johnsgard. "It is arguably the biggest (wildlife) spectacle in North America, and Paul was instrumental in putting it on the map."

Paul Johnsgard. The naturalist’s decades of writing, photography, artwork and educational endeavors helped bring to the public consciousness the value of Nebraska wildlife.

Paul Johnsgard's decades of writing, photography, artwork and educational endeavors helped bring to the public consciousness the value of Nebraska wildlife, especially the unique spectacle that is the sandhill crane migration. 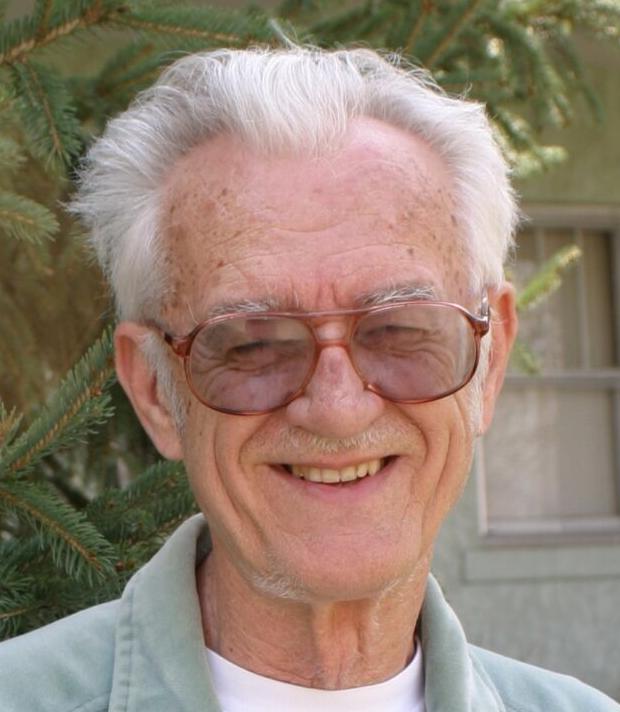