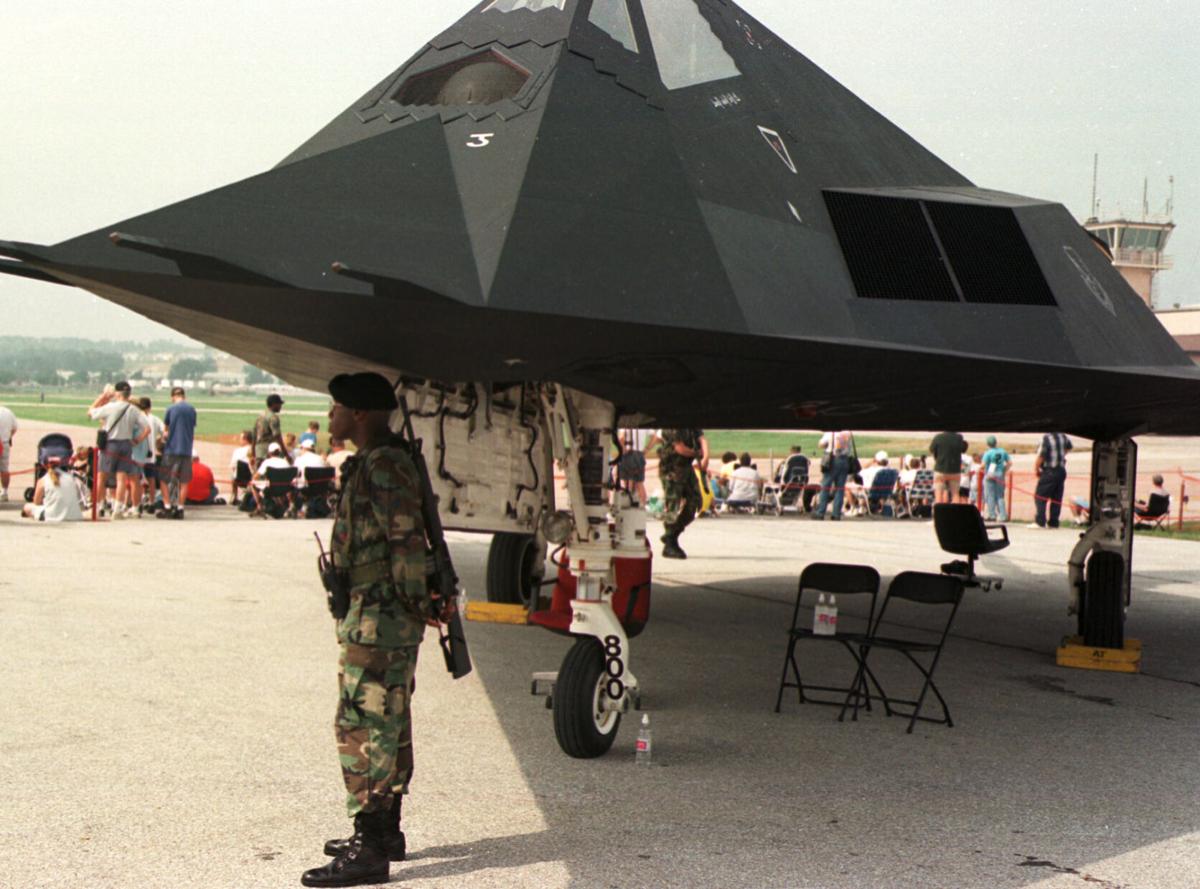 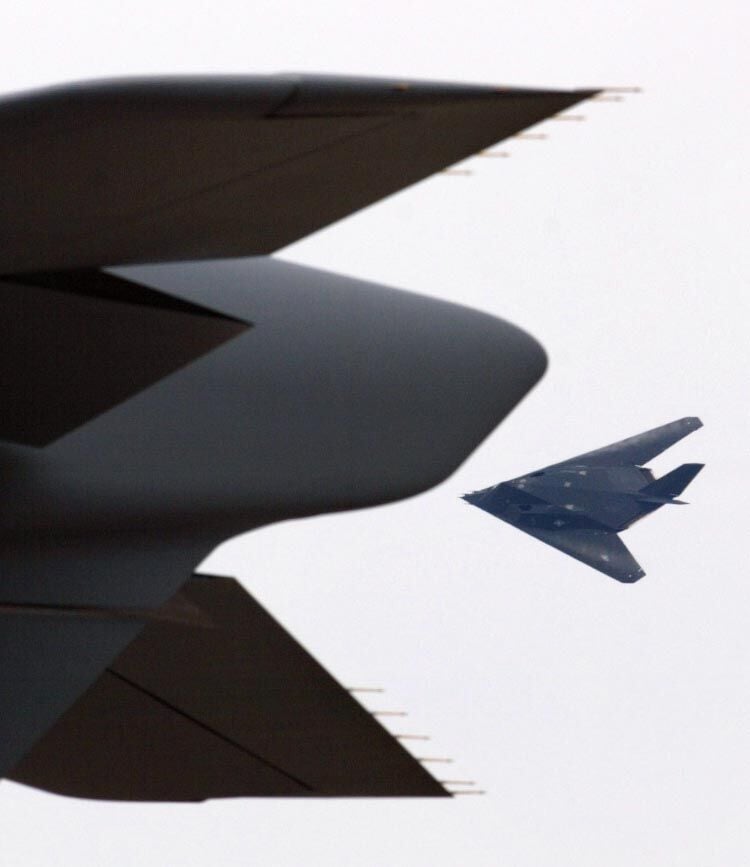 F-117 Nighthawk jet flies past the tail of a C-17 Air Force cargo plane at the Offutt Air Show in this undated photo.

More than a dozen years after the last F-117 Nighthawk flew its last (official) flight over the Nevada desert, the historic Air Force stealth jet will soon be headed to its forever home at Nebraska’s Strategic Air Command & Aerospace Museum.

In its prime, the sleek Nighthawk soared at nearly the speed of sound almost invisible to ground radar. Only 64 were produced for the Air Force in the 1980s.

“It’s a rare aircraft,” said Brian York, the museum’s curator. “We absolutely jumped at the chance to get it.”

Early next month, York and another museum official will travel to Tonopah, Nevada, where the plane has been in a storage hangar since August 2008. They’ll escort it as it is shipped to Nebraska on a flatbed truck, a journey that is expected to take about a week.

“Once it gets to the museum, it’ll go into the restoration hangar,” York said. “We’ve seen some photos. It’s in pretty good condition.”

The Nighthawk was the first U.S. military jet designed to be invisible to enemy radar, and the Air Force went all out to keep its single-seat, twin-engine stealth baby a secret.

Prototypes were designed and built at Lockheed’s “Skunk Works” experimental aircraft facility in Burbank, California, in the late 1970s.

“The classification of the project was at the same level as the Manhattan Project,” said Hal Farley, the F-117s original chief test pilot and director of flight operations, in a YouTube video released three years ago.

Even so, he said, blueprints weren’t stamped “classified” and no extra guards stood outside the hangar doors.

“They made it as normal as possible so as not to attract attention,” Farley said. “Our cover story was, we just don’t talk about it.”

He flew a prototype for the time June 18, 1981, out of a secret Nevada airfield in what is popularly known as Area 51.

Lockheed built and delivered the jets during the 1980s, but the Air Force didn’t acknowledge their existence until Nov. 10, 1988 — even after two fatal crashes in Nevada.

F-117s dropped two bombs during the 1989 invasion of Panama, but the planes captured the public’s imagination during the first Gulf War in 1991. The fleet flew nearly 1,300 sorties with an 80% success rate and no losses.

Part of the fascination was because of the plane’s futuristic design. It was nearly flat, with an angular, lozenge-shaped fuselage, its wings swept sharply back in a V-shape.

It also incorporated design lessons from the SR-71 Blackbird and B-1 bombers to make the F-117 nearly invisible to enemy radar.

“The engineers and designers are shrinking the image. The F-117 is the pinnacle of that,” York said.

The Nighthawk lost its aura of invulnerability, though, when Serb anti-aircraft gunners shot one down during the 1999 bombing campaign in Yugoslavia. Pieces of that plane are still on display in Belgrade.

The jets saw action in both Iraq and Afghanistan, but the Air Force retired them in 2007-08 in favor of the up-and-coming F-22 and F-35 jets.

Instead of scrapping them, though, Congress ordered them into “Type 1000” storage in hangars at the Tonopah Test Range Airport, their longtime base. That would allow them to be brought if necessary.

Still, in 2017 Congress ordered the Air Force to begin disposing of about 50 F-117s still in storage.

That’s how one became available to the SAC Museum this year. York said the museum chose tail number 831 (short for 85-0831, which indicates the model year and production number), a longtime test aircraft for the F-117 program.

“It didn’t see combat,” York said. “But they used it to test everything they were going to take into combat.”

'Looking Glass' aircraft, a Cold War icon, coming back from the cold as part of SAC Museum restoration

Aviation museums in Michigan, Utah, Oklahoma and California have also been given F-117s for display in the past six months.

Number 831 also has just 2,721 flight hours, by far the fewest in the fleet. The underside was painted with a unique Skunk Works logo.

Certain classified systems must be removed before the jet is sent to Ashland, York said. Then it will spend about a year being stripped, repainted and restored.

During that time, the museum will also assemble an exhibit to go with it. York plans to look for certain F-117 memorabilia, such as photographs, maintenance tools and a test pilot’s uniform.

York said the F-117 represents an important moment near the end of SAC’s Cold War history. The Strategic Air Command stood down in 1992, barely a year after the Gulf War.

“It gives us a whole new avenue,” he said. “So many stories to tell.”

The largest living thing on earth is edible and underground

The largest living thing on earth is edible and underground

Rep. Jeff Fortenberry expects to be indicted for lying to FBI but says charge is false

A source said an indictment could come as early as Tuesday. The nine-term Republican from Lincoln said he is being wrongly accused. “We will fight these charges. I did not lie to them,” he said.

COVID cases and hospitalizations continue to fall slowly in Nebraska

Nebraska posted 3,980 new cases in the week ending Friday, down 12% from the previous week. But in some parts of the state, transmission levels are still so high that new surges are possible.

F-117 Nighthawk jet flies past the tail of a C-17 Air Force cargo plane at the Offutt Air Show in this undated photo. 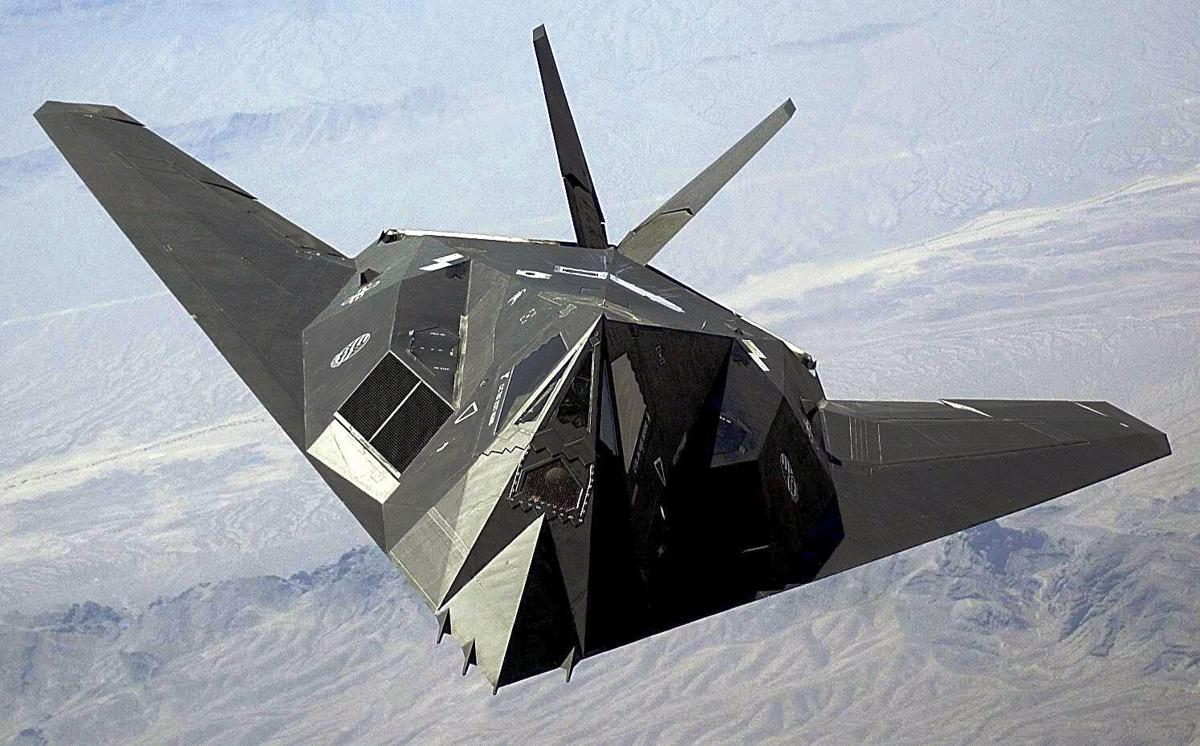 An F-117 Nighthawk in flight over the Nevada desert.