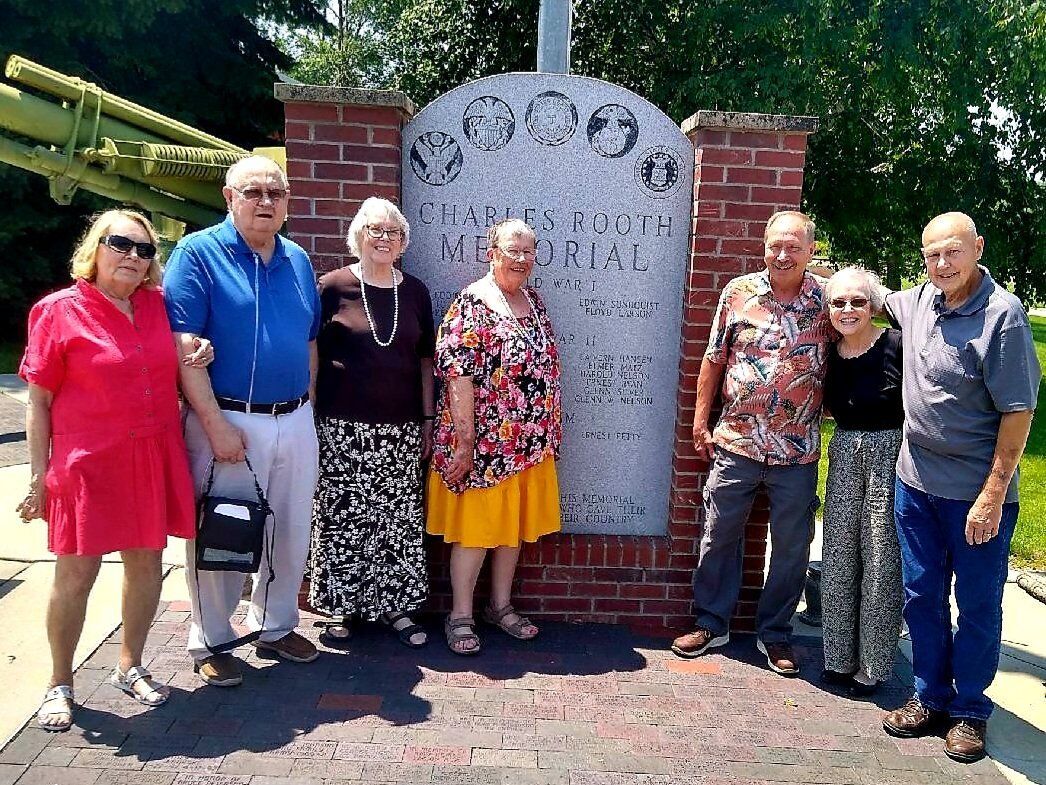 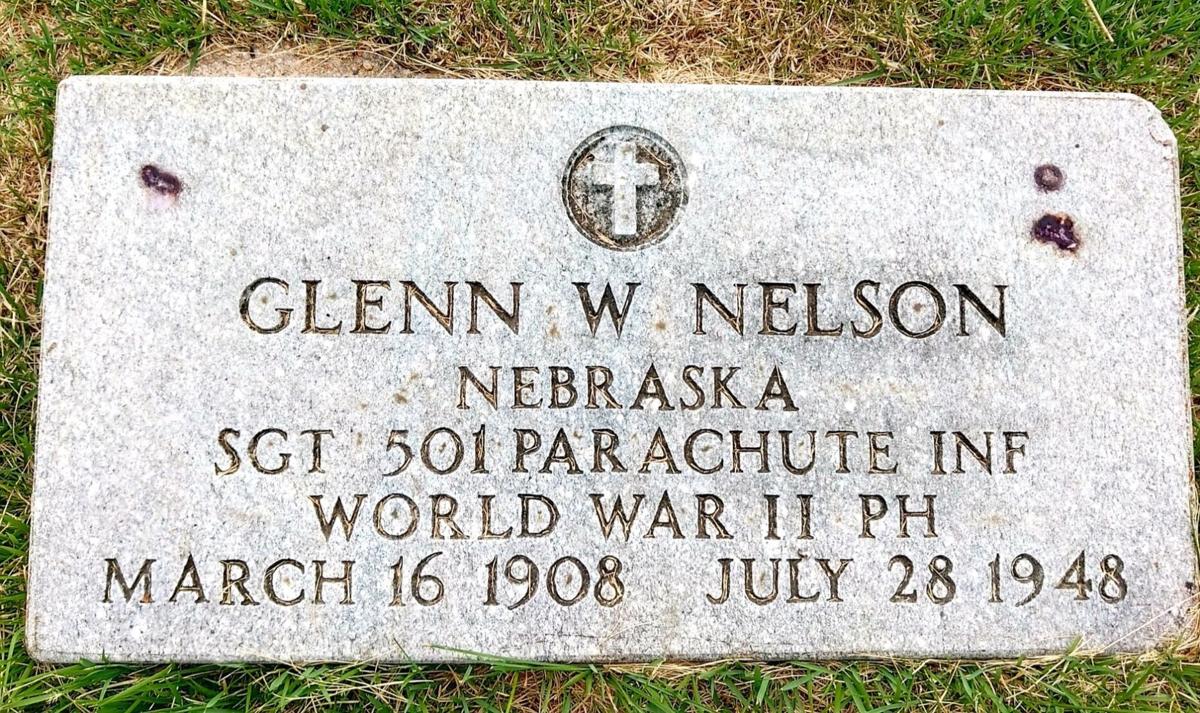 Glenn Nelson’s grave in Oakland, Nebraska. Nelson was part of the First Special Service Force, which was made up of about 2,300 U.S. and Canadian soldiers who were trained in small-unit commando operations behind enemy lines, during World War II. 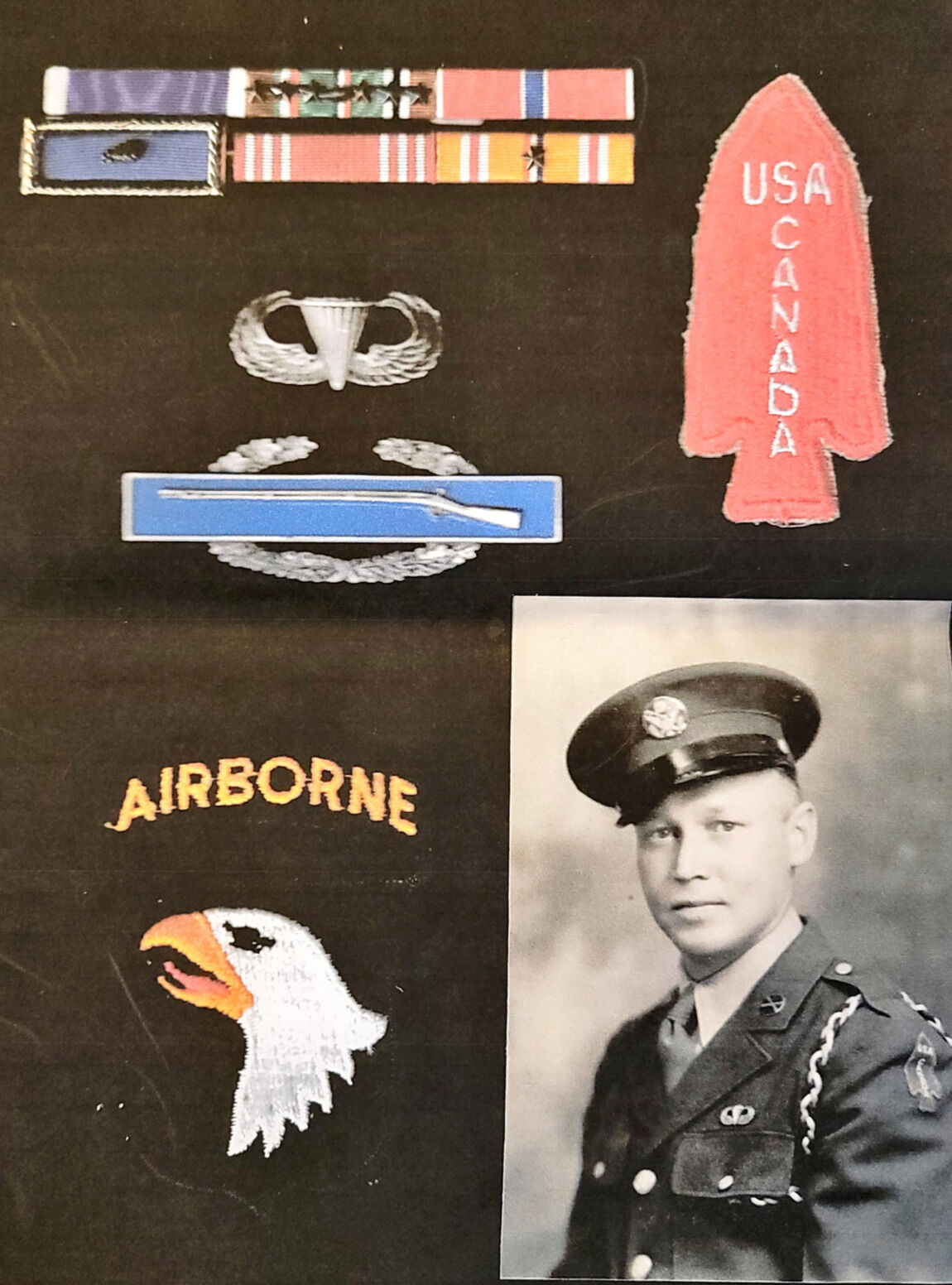 Glenn Nelson died from trichinosis in 1948.

Sgt. Glenn Nelson of Oakland, Nebraska, survived all the hell World War II threw at him.

Months of winter training in snowy Montana. Rubber-boat landings in the Aleutians and France. Months of artillery barrages at the Anzio beachhead. Fighting the Germans in besieged Bastogne.

After living through all that, Nelson, 40, died in 1948 — three years after the war ended — of trichinosis, a rare disease caused by eating undercooked meat containing worm larvae that can hatch inside your body and wreak havoc.

Stories handed down in his family suggest he contracted the disease after parachuting with a small group of soldiers behind German lines on a sabotage mission, and slaughtering a pig to survive. He was a paratrooper with a secretive and elite commando unit that was a model for modern-day special operations forces like the Army Green Berets and Navy SEALs.

The story was convincing enough to persuade leaders of Oakland’s Veterans of Foreign Wars post to add his name earlier this month to a local monument to the town’s war dead at the request of Linda Murray, 78, of Oakland, Nelson’s niece. About 50 people attended the ceremony.

“It seems ironic to me to have survived all he did, and then died the way he did,” said Ben Murray of Oakland, who is Linda’s husband.

Medical experts think it’s unlikely Nelson actually contracted trichinosis during the war, because the now-rare disease has a short incubation period. It strikes within days with severe flu-like symptoms and can be fatal within weeks or months.

Nelson was born in 1908, the oldest of five children of Emil and Ellen Nelson of Oakland.

He graduated from high school in Oakland in 1926 and worked as a farmhand in Burt County.

One of Nelson’s nieces, Jody Jones, 88, of Carroll, Iowa, remembers him as a favorite uncle who played the guitar and sang. He used to buy Jones cherry floats, her favorite treat.

“Everybody loved him,” Jones said. “He’d be a person you wouldn’t think would do all these things.”

Like much about his military life, it’s a mystery to Nelson’s family how he ended up enlisting in the Army in 1941 at the relatively advanced age of 33, before the United States entered World War II.

However it happened, Nelson was recruited the following year for the First Special Service Force, made up of about 2,300 U.S. and Canadian soldiers who were trained in small-unit commando operations behind enemy lines. The troops called themselves “The Force.”

British journalist and inventor Geoffrey Pyke hatched the idea of creating a unit whose members could parachute into the mountains of Norway, establish a secret base on a glacier and carry out sabotage missions against the Nazi occupiers.

The unit was formed and trained at Fort William Henry Harrison near Helena, Montana, for winter combat training in nearby mountains that reached 9,000 feet. They learned hand-to-hand combat, demolition techniques, airborne assault and attack maneuvers.

“My uncle had to learn to ski, which he had never done before,” Jones said. “The most terrifying thing for him was to jump out of an airplane.”

The Norway scheme, called Operation Plough, was scrubbed before the Force’s training ended. Instead the unit’s first mission, in August 1943, involved an amphibious landing on rocky Kiska, an island in the Aleutians that had been occupied by Japan 14 months earlier. The commandos landed only to find out the Japanese were already gone.

Nebraska native Ben Kuroki, 98, had to 'fight like hell' to fight for America

The Force was reassigned to Italy in November 1943, and thrown into the Allied effort to dislodge German forces from a string of entrenched mountain defenses straddling the Italian peninsula.

Within two weeks, the Force got its orders: Take the hilltop fortress at Monte la Difensa, whose guns blocked any Allied attempt to move north. Other units already had tried and failed, at frightful cost.

An artillery unit pounded the Axis fortress with a 75,000-round barrage. Then Nelson’s unit started scaling the rocky east face of the mountain, which the Germans hadn’t bothered to defend because it was impenetrably steep. The last 500 feet, the soldiers used ropes, in darkness, in temperatures near zero.

The Force reached the top, and then chased off the shocked German defenders. The accomplishment stunned even the U.S. soldiers themselves, considering it was their first real combat. Years later, in 1968, a Hollywood movie called “The Devil’s Brigade” would celebrate the feat.

But it came at a cost: 73 dead, and more than 300 wounded. Another 116 soldiers were evacuated because of cold-weather injuries like frostbite and hypothermia.

Glenn Nelson was wounded in the battle, according to an account published about six months later in his hometown newspaper, the Oakland Independent, that quoted a letter he wrote home to his parents.

A shell fragment had penetrated his uniform and jacket on his upper shoulder.

“It made just a very small hole,” Nelson wrote to his parents, “but going through so much cloth, it bruised terribly hard, so my shoulders were sore for a week or two.”

The letter also contained a Purple Heart medal he had been awarded. He reassured his parents he hadn’t been hospitalized.

Within weeks, the Force was moved to Anzio, a beach south of Rome where the Allies had launched an amphibious assault behind German lines.

The campaign eventually led to the capture of Rome, but it is best remembered for months of stalemate, during which German artillery pummeled Allied troops on the exposed beach.

The Force nevertheless burnished its reputation at Anzio. Despite being badly under strength, its members held on to a 7-mile stretch of the front, executing gutsy nighttime commando raids that earned their nickname from a (possibly apocryphal) story about an entry in the diary of a dead German officer that was said to refer to the “Black Devils.”

The raiders also were known to put stickers on the foreheads of German soldiers they had killed bearing the unit’s insignia and the words “Das dicke Ende kommt noch,” translated as “The worst is yet to come.”

After seizing seven bridges and battling into Rome, the Force joined the August 1944 invasion of southern France.

But the Force was living on borrowed time. Its military successes obscured difficulties administering the binational unit, and military leaders couldn’t easily find missions suited to its special skills. On Dec. 5, 1944, it was disbanded, and its U.S. members were reassigned mostly to airborne units.

Glenn Nelson was sent to the 101st Airborne Division, which within weeks was besieged at Bastogne, Belgium, during Germany’s massive last-ditch offensive known as the Battle of the Bulge.

He worked for a time at an aircraft manufacturer in Southern California, then returned to his hometown and worked for a year as a carpenter. He never married.

Like many members of the Force, Nelson moved to Helena, where the unit had trained during the war. He got a job there in a lead-smelting plant.

Nelson had been hospitalized for about two months before his death from trichinosis on July 28, 1948, according to his obituary. LaVerne Nelson, his only brother among four siblings, was visiting him in Montana at the time and arranged for the return of his body to Oakland for burial.

The obituary doesn’t say how he contracted the disease. Linda Murray isn’t sure of the origins of the family story linking it to a pig snatched on a commando raid — though it seemed plausible given his unit’s wartime mission. Jody Jones recalls that her uncle was ill after the war, and Murray says he spent time at a veterans hospital in Denver.

A U.S. raid on 'Hitler's Gas Station' killed 310 airmen. Offutt is working to ID some of the fallen

Trichinosis can cause abdominal pain, diarrhea, nausea and vomiting.

Rupp said the larvae of the trichina worm are encased in cysts, the shells of which dissolve when exposed to stomach acid. Those that survive may penetrate the wall of the small intestine. New larvae can enter the bloodstream, penetrate muscles and, in serious cases, lead to fatal inflammations of the heart, brain or lungs.

The disease is almost unheard of in domestically produced pork now, Rupp said. Drugs given to hogs prevent it. Cooking meat thoroughly or freezing it can also kill the larvae. The few trichinosis cases that still occur are from wild game — particularly bear, a favorite meat of hunters in Montana and nearby states where bears roam.

“This used to be relatively common in the United States, and now it’s quite rare,” he said.

Regardless of how he died, Nelson’s living relatives are happy to see his sacrifice remembered.

“Most people around here don’t know who he was,” Linda Murray said.

Now, maybe they will.

A fired worker shot three people at a grain elevator in Superior on Thursday, killing two before being fatally shot himself, authorities say.

The victims in the grain elevator shooting in Superior, Nebraska, were identified as Sandra Nelson, 60, of Formoso, Kansas, and Darin Koepke, 53, of Hadar, Nebraska.

"You got to know these people ... they tell you they're citizens, and then all of a sudden they're not," said former Rep. Lee Terry, who said he donated the money that originated from Gilbert Chagoury.

Kenneth Kratt, 36, of Madera, California, pleaded no contest Tuesday in Buffalo County District Court to three counts of felony manslaughter in the 2019 deaths of two Lincoln men and a Schuyler man.

Who is the Nigerian billionaire at the heart of Fortenberry's indictment?

At the center of allegations against Nebraska Rep. Jeff Fortenberry, who was indicted this week by a federal grand jury, is a Nigerian billionaire of Lebanese descent named Gilbert Chagoury.

Theresa Thibodeau, a former state senator and former chair of the Douglas County Republican Party, said Thursday that she has been encouraged to consider running for the state's top office.

Fortenberry has said the allegations, linked to a federal investigation into illegal campaign contributions from a Nigerian billionaire, are untrue and a betrayal after he cooperated with the FBI.

An attorney for NU Regent Jack Stark says the case against his client doesn't add up to felony tampering. A judge is taking the matter under advisement.

Glenn Nelson’s grave in Oakland, Nebraska. Nelson was part of the First Special Service Force, which was made up of about 2,300 U.S. and Canadian soldiers who were trained in small-unit commando operations behind enemy lines, during World War II.

Glenn Nelson died from trichinosis in 1948. 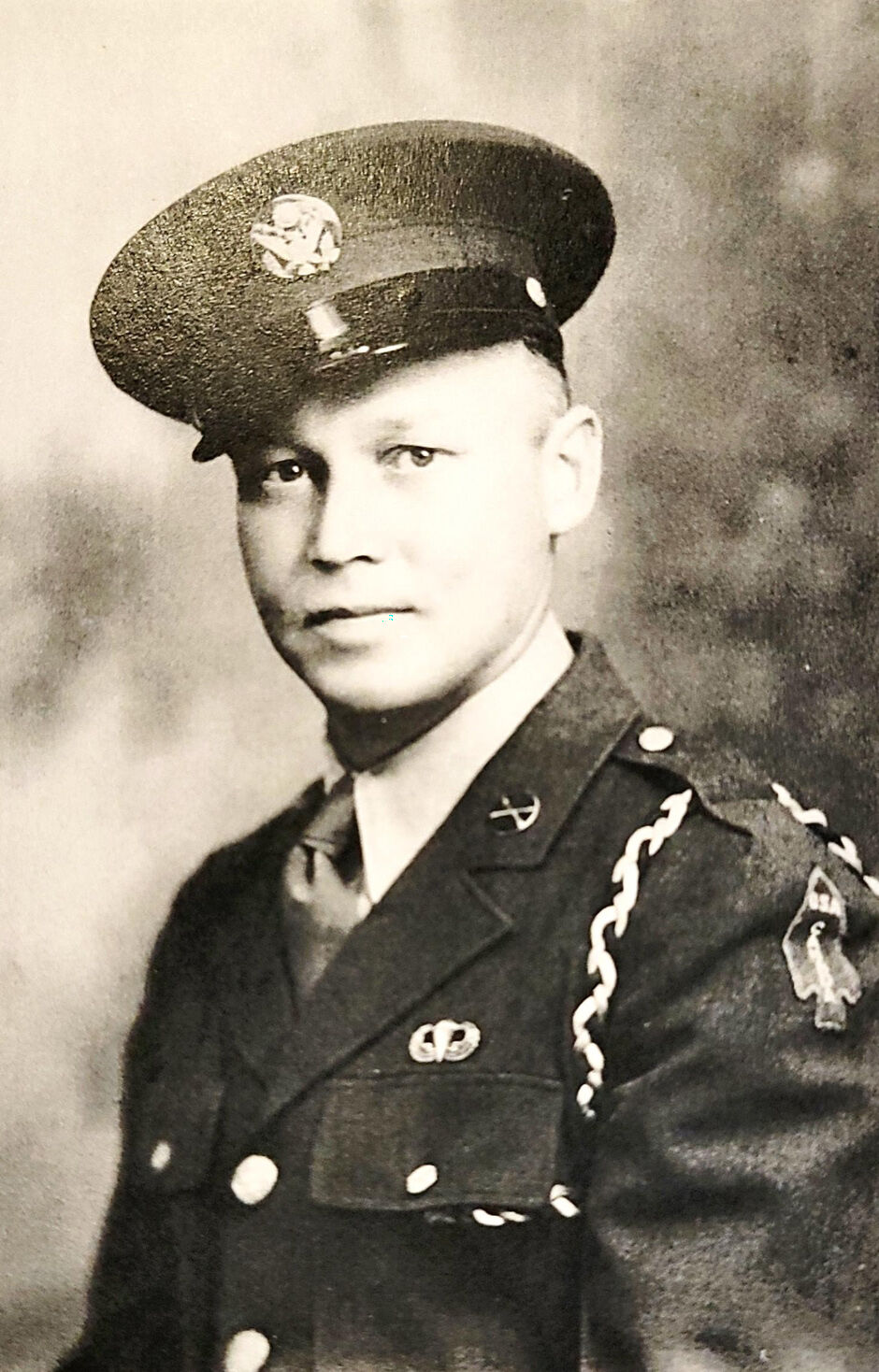