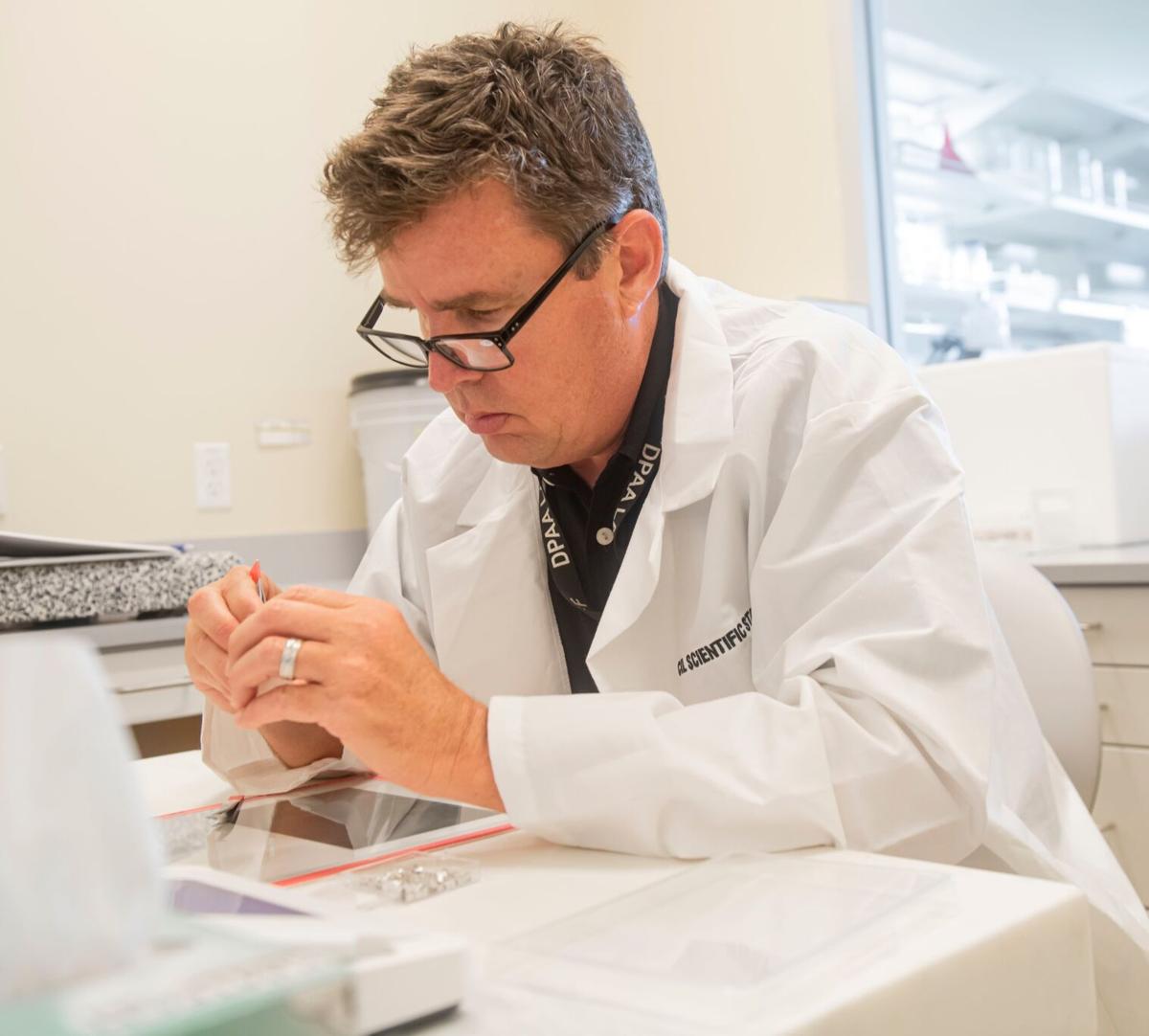 Gregory Berg, a case manager for the Defense POW/MIA Accounting Agency, discovered the fossilized gut contents of a Marine who died at "Frozen Chosin" and was disinterred from a grave in Hawaii for identification in 2006. Scientific analysis by a UNL archaeology professor showed that the 23-year-old private first class had been eating a "starvation-type diet" of wild plants and seeds before he died of a gunshot wound Dec. 8, 1950. 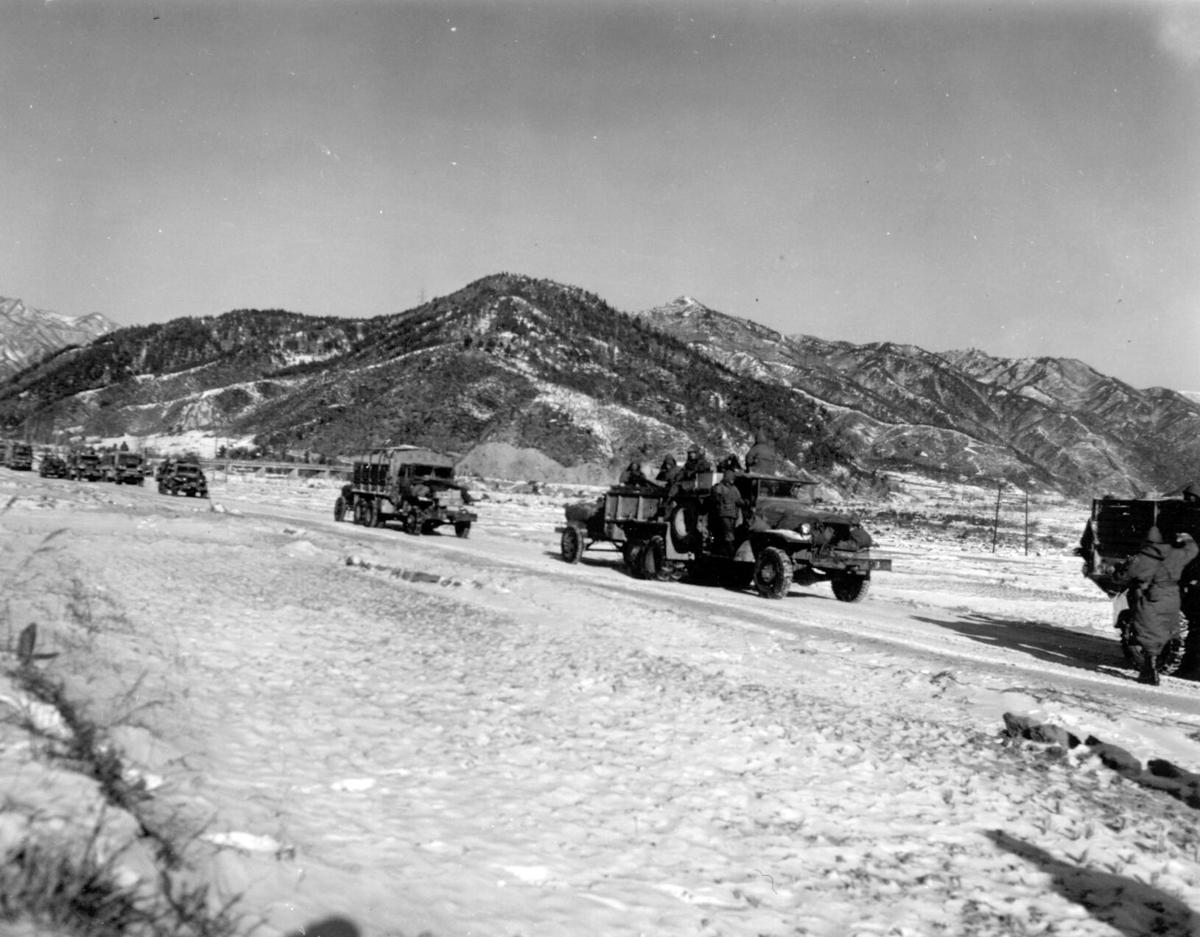 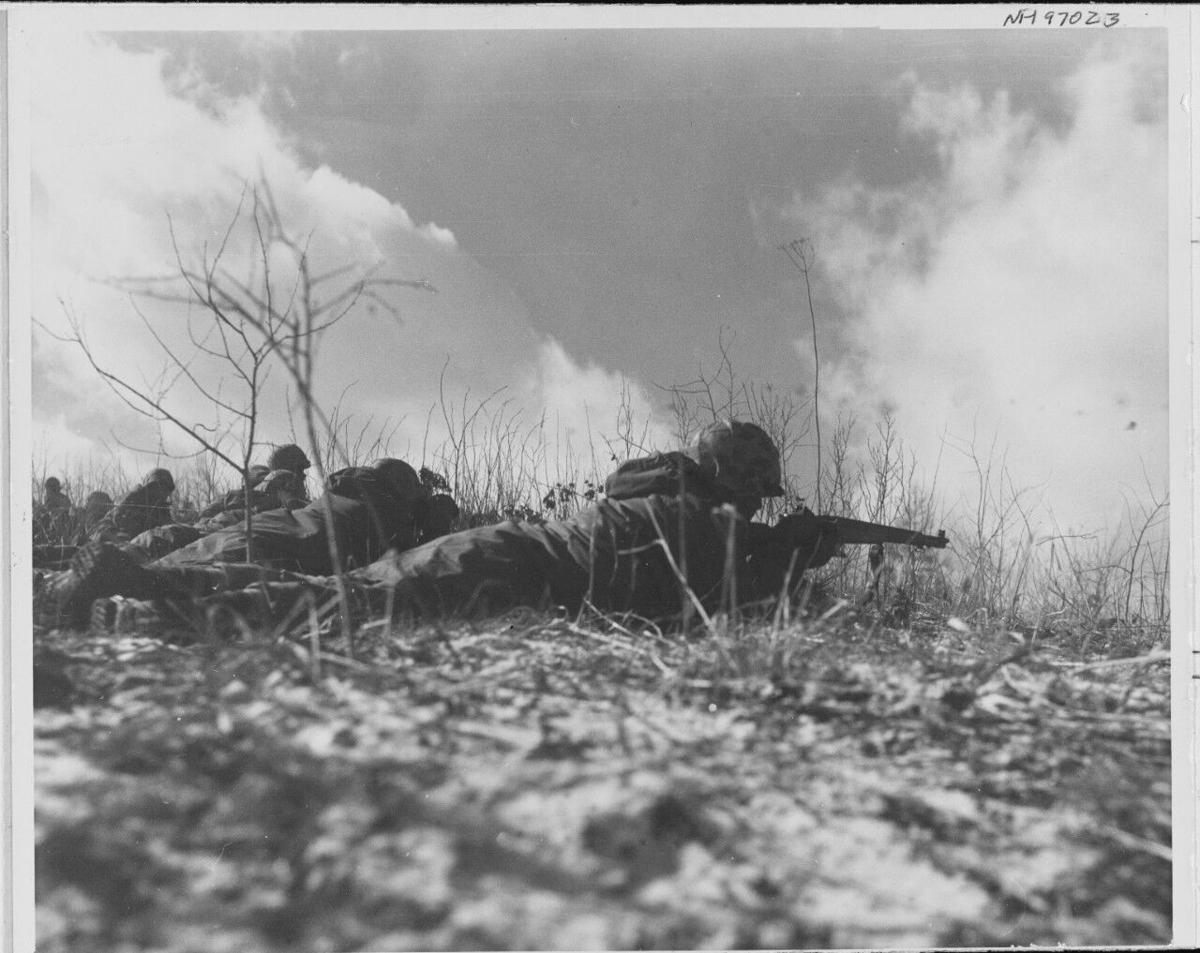 Members of the 2nd Battalion, 7th Marines, try to contact the temporarily cut off Fox Company in a glancing engagement to permit the 5th and 7th Marines to withdraw from the Yudam-ni area during the Chosin Reservoir campaign on Nov. 27, 1950.  Yudam-ni, at the western extremity of the Chosin Reservoir, was the scene of early combat in the campaign, as Chinese forces attacked the two Marine regiments there. The Marines subsequently had to fight their way back to Hagaru along roads surrounded by the enemy. 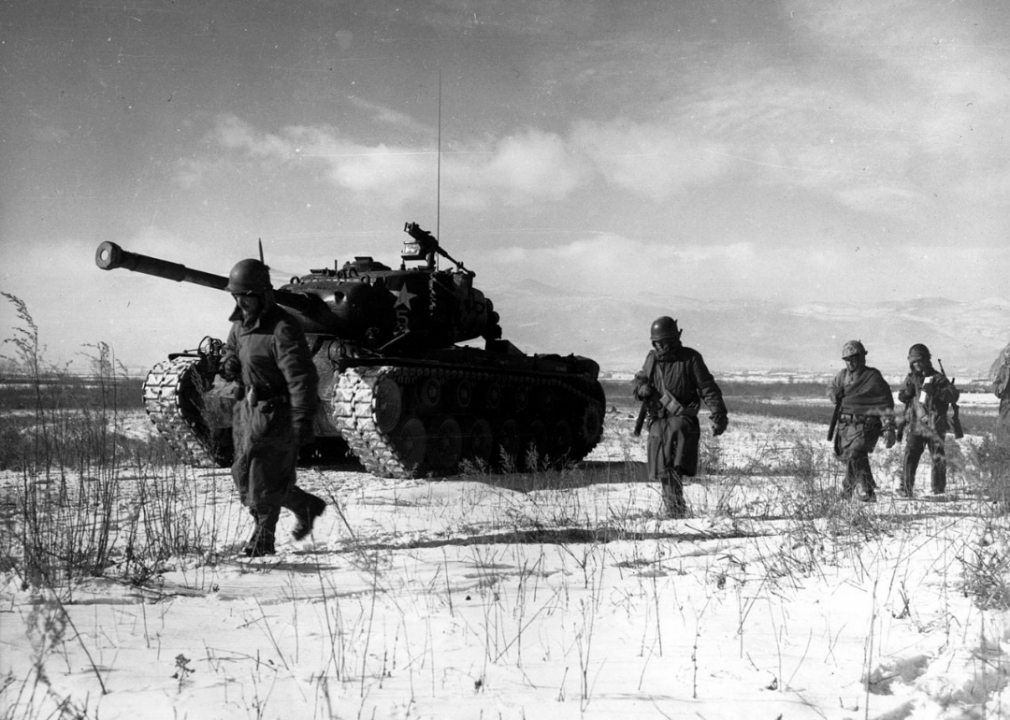 It’s hard to imagine that any troops in any battle ever suffered more terribly than the combatants at the Battle of Chosin Reservoir.

Now, research by a University of Nebraska-Lincoln archaeology professor who studies mummified remains tells us at least some of them died hungry.

Karl Reinhard examined a small and extremely rare chunk of coprolite — a scientific term for fossilized feces — discovered after the 2006 disinterment of a Marine Corps private first class who died during the desperate Chosin Reservoir battle in late 1950.

He and his research team found that the Marine had been eating a starvation diet of low-nutrition plants he must have foraged, including raw mustard seeds and a type of wild rose called potentilla.

“It is a worse food than was fed to the POWs,” Reinhard said. “People only eat them in really hard times.”

An unlikely chain of events led to the findings, which were published this spring in “The Handbook of Mummy Studies.” It began with the startling discovery of the coprolite by Gregory Berg, a Hawaii-based case manager with the Defense POW/MIA Accounting Agency, and included work by researchers in Brazil and South Korea who helped solve the mystery of exactly what the Marine was eating.

The research raises perplexing questions about the pivotal campaign of the Korean War, one of the most famous battles in Marine Corps history. While the horror and hardship of the Chosin Reservoir battle are well-documented, veterans and historians have not focused on extreme hunger.

“What I could identify was so weird, it left me wondering what it meant,” Reinhard said. “What was going on? You need to talk to the people who were there.”

Rex Gruber of Omaha certainly qualifies. The veteran of the 2nd Battalion, 7th Marines fought at Chosin in the same regiment as the Marine whose remains Reinhard studied.

Gruber’s ankle was shattered by a bullet near the beginning of the battle, which started with an attack by a massive Chinese force Nov. 27, 1950, and continued for 17 days. He spent 10 days in a medical tent while his besieged company defended an ever-shrinking hilltop perimeter.

After a sister battalion — the one that included Reinhard’s “hungry” Marine — rescued his unit, Gruber rode out in the back of a truck filled with dead and wounded men while the Marines who were still able fended off the Chinese.

He said he recalls cold and pain. Hunger, not so much.

“They didn’t bring us steaks, I can tell you that,” he added.

'So much effort is going to find our loved ones': POW/MIA families updated on identification efforts

The Chosin retreat ended a daring and ill-advised campaign to send United Nations forces — dominated by American soldiers and Marines — under the command of Gen. Douglas MacArthur, all the way to North Korea’s border with China. They hoped to finish a rout of the army of communist North Korea only six months after their surprise invasion of South Korea, a U.S. ally.

But U.N. commanders disregarded evidence that Chinese forces had infiltrated North Korea and were laying an ambush.

The Americans were stunned when a Chinese army estimated at 120,000 surrounded and attacked about 30,000 U.N. troops near the iced-over lake known as the Chosin Reservoir.

The battle was fought in mountains deep with snow, in temperatures that dropped to 30 degrees below zero. With air support, the encircled U.N. forces still managed to break out and escape to the coastal port of Hungnam while inflicting heavy losses on the Chinese attackers.

About 1,000 U.N. troops were killed and nearly 5,000 went missing. Seventeen Medals of Honor and 78 Service Crosses were awarded for valor, more than for any U.S. military battle in history except the World War II Battle of the Bulge.

“The survivors of the Chosin are a very proud group, because it was horrible,” Berg said. “They fought their way out.”

The Marine Corps private died of a gunshot wound in the final days of the battle and was buried in a temporary cemetery at Hungnam before the U.N. forces mounted a Dunkirk-style departure from that North Korean port city.

His remains were among 2,944 sets of American remains returned by North Korea in 1954. Of those, 416 couldn’t be identified and were buried in graves marked “unknown” at the National Memorial Cemetery of the Pacific in Honolulu.

Based on records, Berg’s team of anthropologists at the Hawaii lab of the accounting agency — then known as the Joint POW/MIA Accounting Command — linked the remains to a 23-year-old missing Marine Corps private. He was identified and buried in 2007, though Reinhard and Berg have not disclosed his name because his surviving relatives haven’t been briefed.

When he examined the remains, Berg found that parts were astoundingly well-preserved.

“If it was cold, if he was dehydrated, if he had low body fat — those are the kinds of things that lead to mummification,” Reinhard said.

For the only time in his career, Berg found a small chunk of partially digested food in the Marine’s intestines.

“It’s kind of this amazing combination of preservation and temperature and lack of bug activity,” he said.

Coincidentally, Berg had done graduate studies on coprolites that was influenced by Reinhard’s research on the gut contents of mummies.

Reinhard has taught for more than 30 years in UNL’s School of Natural Resources. His particular expertise is on identifying types of pollen in the diet, even tiny amounts. He has helped Nebraska law enforcement agencies solve crimes.

Berg sent Reinhard the coprolite back in 2006. The specimen, about 1 inch by 3 inches, seemed like it had been covered in shellac, Reinhard said. The first time he tried to section it, the blade of his scalpel broke.

He puzzled for years over the strange plant matter it contained — something from the wild rose family, and some seeds that looked like wild sesame.

“There was nothing in the sample that was GI (soldier) food,” Reinhard said.

It was always a curiosity, a side project. He all but gave up on the case.

In 2012 he met an expert on Korean mummies who was familiar with plants grown on the Korean Peninsula. Three years later, in Brazil, he encountered a forensic botanist — someone who studies plants in crime scenes.

“There aren’t many of those walking the face of the planet,” Reinhard said.

Among them, they concluded that plant matter in the Marine’s belly was potentilla, also known as cinquefoil. In Europe, some varieties are grown as ornamental flowers. In many places, they are considered weeds.

“It is super-low in nutrition — marginally unpalatable,” Reinhard said.

The seeds in the coprolite turned out to be wild mustard seeds. At first he thought they might have been used with meat or kimchi, a signature Korean dish, scrounged from a local village. But close analysis showed the seeds were eaten raw, not boiled or baked or cooked.

The military units at Chosin had been well-fed up until the start of the battle. Newspapers had published photos of the troops enjoying a large Thanksgiving celebration a few days earlier. Planes air-dropped supplies of food and ammunition even during the fighting, though some fell in a dangerous no-man’s land between U.S. and Chinese battle lines.

“Supply chains are disrupted. It’s rough,” said Berg, who has studied the battle. “The cooks aren’t there cooking up turkey dinner.”

Berg said the historical record of the battle makes little mention of foraging or starvation.

“All we can do is ask why he would eat these things. The supposition is that these are very difficult circumstances,” Berg said. “He was trying to get by.”

Gruber, the Chosin veteran from Omaha, was baffled to hear that a Marine from his regiment could have been foraging for plants.

“There wasn’t any grass up there,” he said. “It was all snow and ice.”

The mystery of the starving Marine may endure. The Chosin survivors today are in their 90s. And of the 600 Korean War MIAs identified by the accounting agency, no others have yielded fossilized evidence of what they ate.

What the study reveals, Reinhard said, “is the individual struggle of the soldier to survive in the far larger struggle imposed by liberating Korea.”

And it does nothing to detract from the pride of the Marines who endured one of the most harrowing battles in U.S. military history.

“They did what they had to do to survive,” Berg said.

Bill Harrington, who survived 50 bombing missions in WWII, knew how fragile life could be. “I have no idea how God selected me to live all these years,” Harrington said ahead of his 101st birthday.

Gregory Berg, a case manager for the Defense POW/MIA Accounting Agency, discovered the fossilized gut contents of a Marine who died at "Frozen Chosin" and was disinterred from a grave in Hawaii for identification in 2006. Scientific analysis by a UNL archaeology professor showed that the 23-year-old private first class had been eating a "starvation-type diet" of wild plants and seeds before he died of a gunshot wound Dec. 8, 1950.

Members of the 2nd Battalion, 7th Marines, try to contact the temporarily cut off Fox Company in a glancing engagement to permit the 5th and 7th Marines to withdraw from the Yudam-ni area during the Chosin Reservoir campaign on Nov. 27, 1950.  Yudam-ni, at the western extremity of the Chosin Reservoir, was the scene of early combat in the campaign, as Chinese forces attacked the two Marine regiments there. The Marines subsequently had to fight their way back to Hagaru along roads surrounded by the enemy.

It’s hard to imagine that any troops in any battle ever suffered more terribly than the combatants at the Battle of Chosin Reservoir. 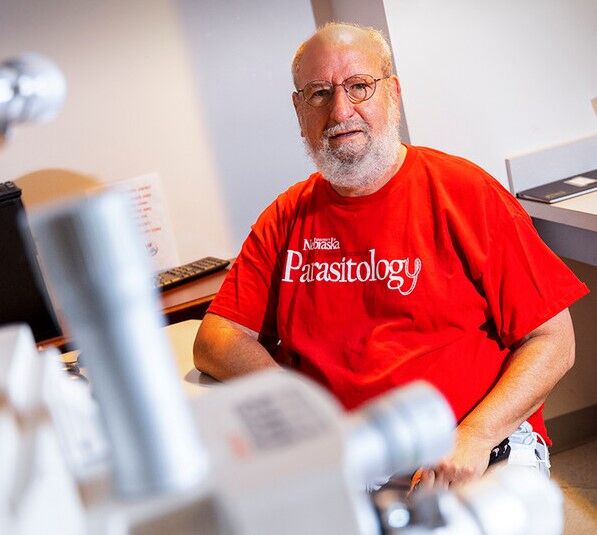