Subscribe
Read Today's E-Edition
Share This
Watch Now: Trooper gets a scare as grass fire shuts down eastbound I-80 in western Nebraska
0 Comments
Share this
1 of 2 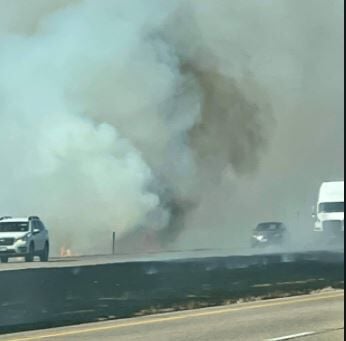 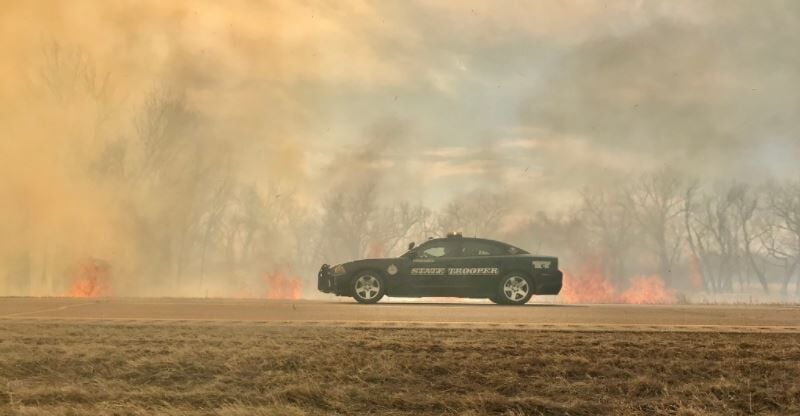 A smoky grass fire closed eastbound Interstate 80 on Thursday afternoon at Brady and gave a Nebraska State Patrol trooper a scare as fast-moving flames threatened to reach his vehicle.

The fire started out small and in the ditch but grew quickly, said Cody Thomas, a spokesman for the Nebraska State Patrol.

Video from the State Patrol shows the trooper backing his truck down the shoulder of the Interstate as the flames race toward him on his right and a series of semi trailer trucks speed past him on the left.

Trooper Seth Olson had been outside his vehicle directing traffic away from the flames when he saw the fire approaching, Thomas said. He got in his truck and backed down the Interstate with the flames in pursuit. Wind speeds varied, according to the National Weather Service, but gusted to about 30 mph at the time of the fire.

“He says he’s never seen anything like that,” Thomas said. “He said the heat was amazing, and he was worried that the paint on his truck was going to melt.”

Thomas said troopers train so they can make controlled, rapid backups. In this case, another trooper farther down the highway helped divert traffic to one lane so Olson had a better margin of safety.

No other problems were known to have resulted from the fire, Thomas said.

The Interstate was closed from about 1:10 to 2:30 p.m. Among those assisting at the scene were the Dawson County Sheriff’s Office and the Lexington, Gothenburg and Cozad Fire Departments.

The fire danger will be elevated in the Nebraska Panhandle on Friday and across much of western and central Nebraska on Saturday, according to the weather service.

The cause of the fire isn’t known. Central and western Nebraska is in drought, so sparks from passing vehicles or an errant cigarette could have ignited the fire.

“This is the season,” Thomas said. “So we’re asking people to pay attention.”

Omahan Wendy Donahue’s ticket matched the five white numbers but missed the Powerball, enough to win her a cool $1 million.

The Nebraska State Patrol arrested a suspect Friday morning in connection with four homicides that occurred in the northeast Nebraska town of Laurel Thursday.

The Nebraska State Patrol said that "a situation with multiple fatalities" occurred in Laurel Thursday morning.

Speaker of the Legislature Mike Hilgers said Thursday that he has contacted multiple lawmakers to discuss a special session, but would not confirm whether he is proposing a 12-week ban.

An 81-year-old Iowa woman died and four other people were seriously injured in a four-vehicle crash Sunday just south of Fremont, Nebraska.

Five bulls and three cows were killed during the July 1-31 season on private land in specific parts of Lincoln, Perkins, Keith, Deuel and Garden counties.

Nebraska advocates said Kansas voters' decision to uphold abortion protections "sends a clear message" of support for abortion rights. Opponents cautioned against reading too much into the results.