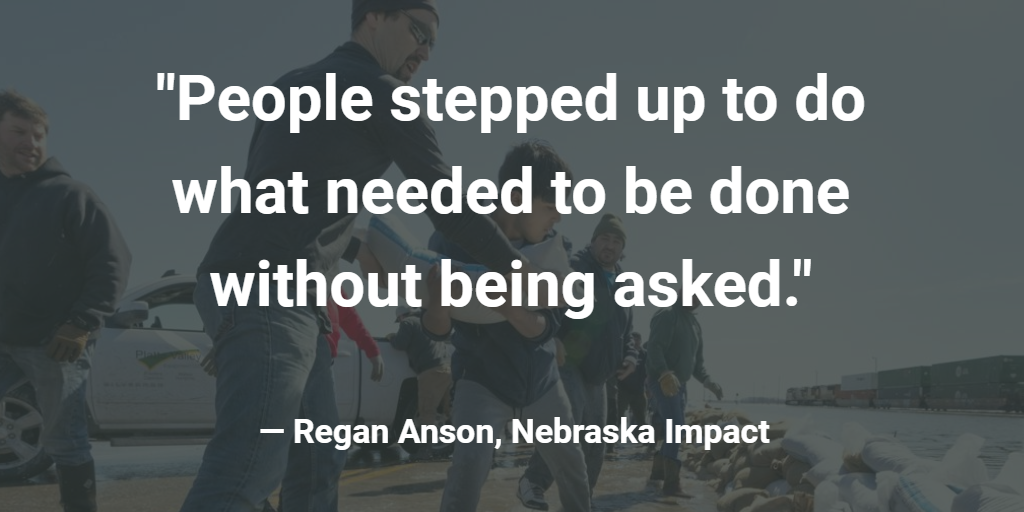 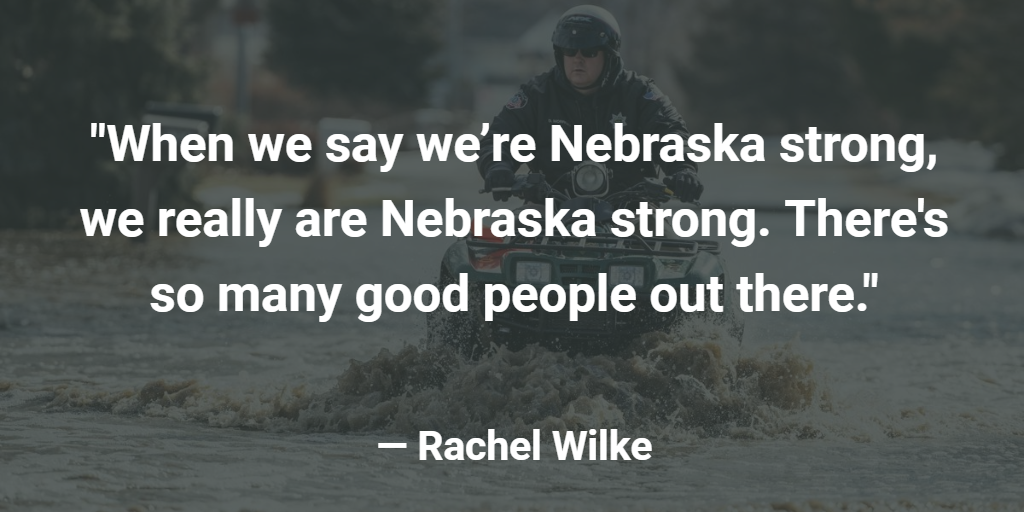 Carrie Messinger and Kipton Oetter cooked and served meals out of a Waterloo church — breakfast, lunch and dinner for families who had to flee their homes due to flooding. They ended up distributing 8,000 meals among Waterloo, Fremont, Pacific Junction and Glenwood, Iowa, and created a new organization, Boots on the Ground Meals. 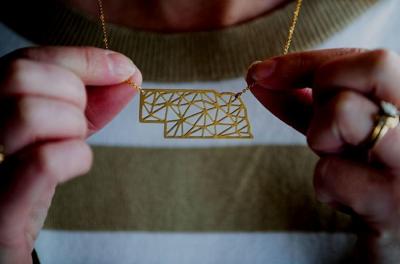 It’s been nine months since Dannebrog was invaded by swift, icy floodwaters. Lori Larsen still chokes up a little when she thinks about the acts of kindness bestowed upon the tiny village and its residents.

Settled next to Oak Creek and the Middle Loup River north of Grand Island, the 300-person town spent 36 hours evacuated and underwater in mid-March.

As shell-shocked Dannebrog homeowners stared into basements filled to the brim with water, Christian disaster relief volunteers got to work bailing out water and dismantling ruined furnaces.

A Brownie troop leader called Larsen and asked if the girls could gather some donations. Sure, said Larsen, who ran the local flood command center. She appreciated the offer, but didn’t expect too much from the grade schoolers.

They pulled up to Dannebrog with a truckload of provisions and an older brother who offered to make deliveries door to door.

“They hauled supplies in, too, those little girls,” Larsen said, wonder in her voice. “Still, the things that happened just amaze me.”

Millions of dollars in donations poured in to buy hay for hungry cattle, send clean water to communities without and provide a little comfort and security to those who lost their homes and nearly all their possessions.

Today, The World-Herald honors these heroes and helpers, the people who responded during and after dangerous, historic flooding. They are the newspaper’s Midlanders of the Year for 2019.

Past Midlander of the Year winners

“Nebraska Strong” trended across social media and became not just a motto, but a movement. This honor is dedicated not only to the people and organizations profiled here, but also to all who gave of themselves to help the heartland recover and rebuild.

It all started with a powerful “bomb cyclone” storm in mid-March that, combined with frozen ground and snowmelt, caused rivers and streams to overflow across parts of Nebraska and western Iowa.

And yet, out of the darkness emerged tales of heroism and generosity from people united in purpose and spirit.

Larsen remembers the group of teenage boys from south of Hastings who borrowed their dad’s pickup and filled the bed with donated water and other necessities. They drove from town to town, unloading supplies until they ran out.

A local dropped off a load of rubber boots.

“Do you know how helpful those were?” Larsen said. “Girls put on size 13 men’s boots, but they had boots to go muck out the basement.”

Residents had to be persuaded to accept donated bottles of bleach — surely there was someone worse off who needed it more, they said.

“There’s thousands of stories out there that are heartwarming, and in some cases, heartbreaking,” said Regan Anson of Nebraska Impact, an organization that promotes volunteerism. “People stepped up to do what needed to be done without being asked.”

Those who answered the call for help don’t fit any certain mold.

Some were first responders who like to say they were simply doing their job. Rural communities in particular relied heavily on volunteer fire departments.

Others were ordinary citizens moved by images of stranded cattle and houses submerged up to the roof. Churches and national and local groups like Team Rubicon or Omaha Rapid Response dispatched armies of volunteers to tear out soggy drywall and serve vats of chili.

Out-of-staters sent money, fencing and bottled water in bulk. When people were stymied by closed roads, pilots volunteered to ferry nurses and children by air.

They listened. They rolled up their sleeves. They asked: What do you need? How can we help? Do you need a hug, a kind word, a prayer?

In many ways, it was Nebraska’s finest hour, Gov. Pete Ricketts said last week at a ceremony to honor flood heroes.

In Fremont, where floodwaters cut off roads in and out of the city and low-lying neighborhoods had to be evacuated, Trinity Lutheran Church became a Red Cross emergency shelter on March 15. With only a few hours’ notice, Red Cross workers and congregants set up cots, organized meals and found volunteers to clean bathrooms and play card games to distract scared kids.

One resident, Tony, had to leave his home and stayed briefly at the shelter before he found a bed elsewhere.

“The first thing he did was to come back and tell one of our volunteers … ‘I speak Guatemalan, English and Spanish, and I’m your interpreter for the weekend,’ ” said Anthony Gerber, the church’s senior pastor.

At least half of the evacuees staying at the church spoke little to no English.

“One of the guys without a home was one of our biggest helpers that weekend. He was a huge blessing to us,” Gerber said.

The regional chapter of the American Red Cross opened 30 shelters, served thousands of meals and distributed nearly 2,000 cases of water.

The Nebraska Farm Bureau collected donations totaling nearly $3.5 million for aid to farmers, ranchers and residents of small communities affected by the flood. Just about all of it has been distributed.

“We’re proud people in Nebraska, in agriculture,” said Farm Bureau President Steve Nelson. “Typically we’re not used to asking for help. But this is an extraordinary situation, and it’s OK to ask for help.”

Others didn’t wait for disaster organizations or emergency services to mobilize.

Columbus farmer James Wilke fired up his tractor when he got a call that a motorist was stranded on a nearby country road on March 14. As he crossed the swollen Shell Creek, the bridge over it collapsed, throwing Wilke and his tractor into the water. His body was found downstream hours later.

While he’s been hailed as a hero and memorialized in a John Deere video, his wife, Rachel Wilke, said her husband wasn’t the type to seek glory or praise.

She finds comfort and strength today in her family, friends, faith and the family farm, where they continue to raise hundreds of cattle. She looks for signs of James in a cherry-red cardinal, a penny on the ground, a warm breeze that their son Colton, 24, felt as he walked the pastures.

Kipton Oetter has spent years boating, fishing and living alongside the Elkhorn River in Waterloo. “I’m just a crazy fisherman with a boat,” he wrote on Facebook.

When the river started rising earlier than expected on the morning of March 15, one of his old neighbors called. He was stuck in his house. The volunteer fire department, slammed with calls for rescue, said it would take anywhere from three to 24 hours to get there.

Oetter jumped in his 15-foot-long jon boat and gave himself a little pep talk as he gingerly navigated the murky waters and the propane tanks that had emptied into the waters. He picked up his former neighbor and another resident and took them back to his home in Riverside Lakes, which became surrounded by water, too. They ended up staying 3½ days.

He and his family own Jack and Mary’s Restaurant in Omaha. He knows a thing or two about cooking and giving out orders, and he knew food distributors who might be willing to donate supplies. Strangers before the flood, he and Carrie Messinger teamed up to serve meals out of a Waterloo church — breakfast, lunch and dinner for families who had to flee their homes.

They ended up distributing 8,000 meals among Waterloo, Fremont, Pacific Junction and Glenwood, Iowa, and created a new organization, Boots on the Ground Meals.

“It was pretty amazing to see the community step up,” Oetter said.

And for many groups, the help continues, long after the floodwaters have subsided.

“There’s still a lot of long-term rebuilding and long-term losses to make up for,” said Nelson, of the Farm Bureau. “The effects of this storm are certainly far from over.”

Along with Bethany Lutheran Church in Elkhorn, Boots on the Ground Meals raised money to provide more than a dozen King Lake homeowners with $1,000 credits for new appliances from Nebraska Furniture Mart.

Many flood victims are still repairing their flooded homes and businesses, and feeling the sting from the growing pile of bills, lost income or fields that couldn’t be planted.

“That’s what people need to realize, all over the state … volunteers are still needed,” she continued. “If you’re involved in a church organization or a business that does community service hours, check with long-term recovery groups and find out who needs a day of help.”

Photos courtesy of the Office of Gov. Pete Ricketts.

These are the stories of our communities facing the floods, encountering tragedy, banding together and embarking on the long road to recovery.