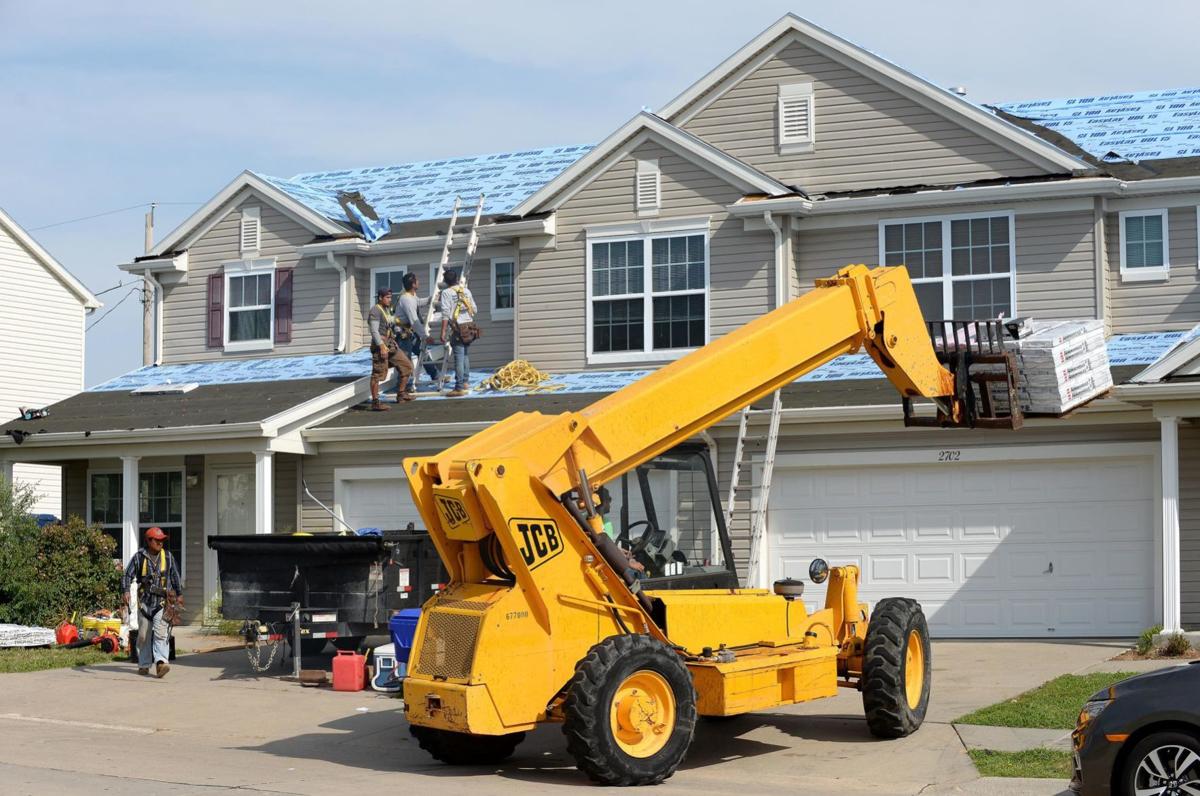 Roofers install a new roof on a Rising View home in August 2017. A tornado and hailstorm that summer forced managers to replace about 1,700 roofs in the community of 1,954 homes, but some residents have complained that repairs have taken up to two years. 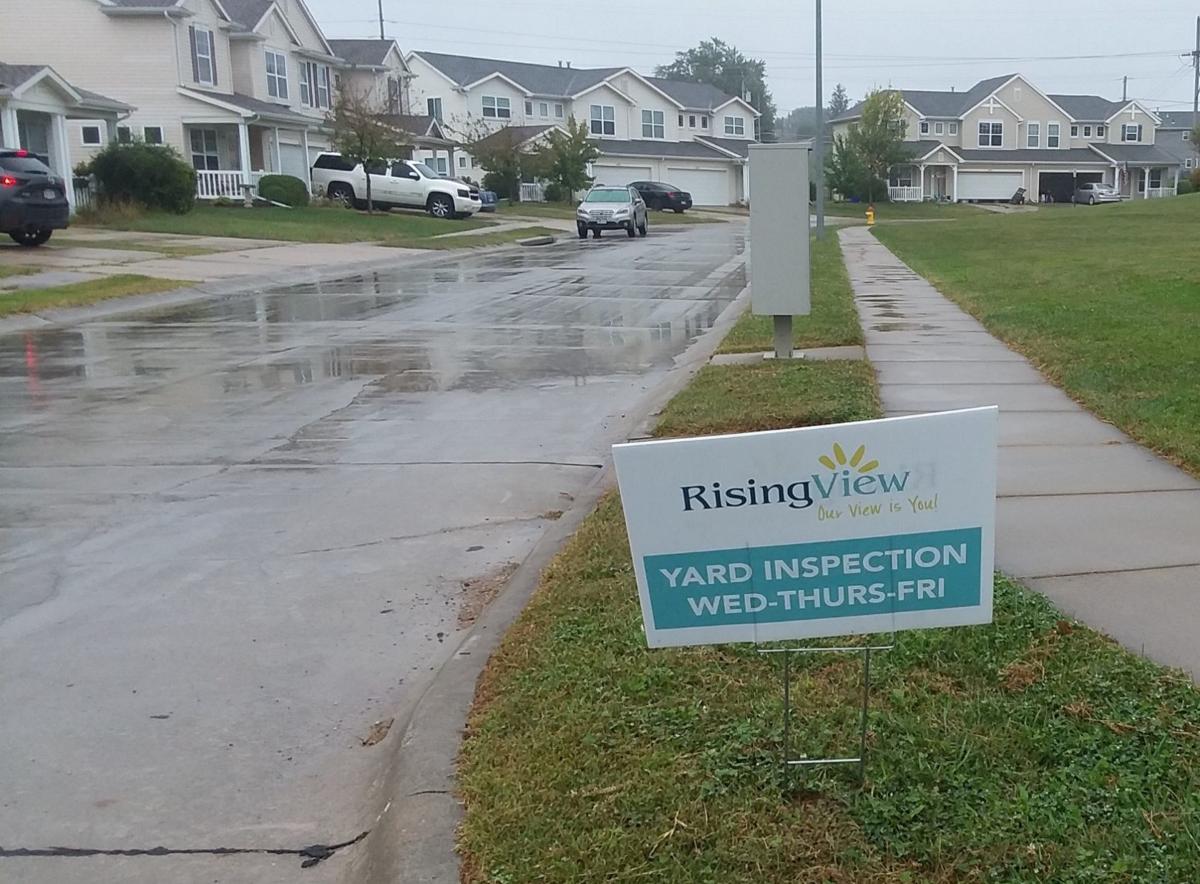 Offutt Air Force Base’s Rising View housing area. Offutt has almost 2,000 homes for military families, most of which are in Rising View.

Offutt Air Force Base’s senior leaders admitted Tuesday that their oversight of nearly 2,000 homes for service members had slipped in the 14 years since base officials turned housing over to private management, a change that has prompted some residents to complain of poor living conditions and slow repairs.

Col. Gavin Marks, commander of the Offutt-based 55th Wing, pledged to change that.

“As an institution, we took our eyes off this. We privatized it, and then we walked away,” Marks told a crowd of nearly 100 residents at a town hall meeting in the Rising View community Tuesday evening. “This is command business. We are getting at this.”

Since the mid-1990s, the U.S. military has turned over responsibility for building, managing and maintaining most of its family housing to private companies. In 2005, Omaha-based Burlington Capital assumed control of Offutt’s on- and off-base housing, building more than 900 new units and renovating hundreds of others in the Rising View community north of Capehart Road.

But service members from around the country testified at congressional hearings last February about living in poorly constructed houses infested with mold or bugs, and managed by companies that were slow to make repairs. Though no one from Offutt testified, some of those problems were echoed on Offutt-focused Facebook pages like “Rising View Rants” and other social media.

Following the hearings, senior Pentagon leaders ordered inspections of every privatized military home in the country. At Offutt, the survey revealed 96 homes with what inspectors described as “health and safety” violations, such as mold or lead paint.

“To date, all of them have been rectified,” said Sara Webster, the Rising View leasing manager.

A survey showed that 76% of Offutt residents were satisfied with the health and safety of their homes, well below the Air Force average. Burlington Capital’s marks in surveys had slipped badly since 2017.

Several residents at the town hall meeting said they are afraid to move out of their Rising View homes because managers have a reputation for loading up damage charges during final move-out inspections.

“You charge outrageous amounts to get out of Rising View,” one woman said.

Webster said every inspection is reviewed by members of Offutt’s military housing office. She noted that many of Rising View’s 38 employees are themselves residents of the community, and former service members or military spouses.

“We do our best to treat you guys fairly,” she said. “We just ask that you turn it back the way we turned it to you.”

Residents also complained that roads in the community had fallen into disrepair. Marks said he had noticed the same thing since moving to Offutt in June.

“It drives me crazy — the roads on and off base,” he said.

Dominic Vaccaro, who heads Burlington Capital’s real estate division, said the company has been catching up on roadwork recently after two years focused on repairing roofs and clearing out trees damaged by tornadoes and a severe hailstorm in June 2017.

“We did struggle with responding to the storm a couple of years ago,” he said.

Marks said the problems with housing and roads have his “full attention,” and he said he set up a new hotline to handle complaints if residents aren’t satisfied. And he plans to continue the housing inspections each year.

Tiffaney Thompson, a 1½-year resident of Rising View with her husband, Aaron, said the tornado-damaged roof of a house across the street from theirs was repaired only a few weeks ago. But said she was impressed with the 55th Wing’s apparent commitment to fixing problems in the community.

“I’m really glad they’re taking the initiative now to get ahead of it, but I think they still need to catch up on some of the old ones,” she said. “The commander’s got a lot on his plate. He’s doing everything he can.”

Some in Offutt housing complain of mold, leaks and more, but developer says most are happy

Inspectors found 95 “health and safety” violations in 1,233 homes occupied by military families in Offutt's off-base housing, including problems such as mold or faulty wiring. All were quickly corrected, said Col. W.R. Alan Dayton, who oversaw the inspections.

More than 1,800 roofs have been replaced after Bellevue tornado last June, and cleanup is still ongoing

The area of damage "was pretty widespread," Bellevue chief housing inspector Mike Christensen said. Christensen said 1,840 roofs have already been replaced and he anticipates more will be.

“We never dropped the mission,” said Lt. Col. Douglas Dodge, the squadron’s commander. “We were always prepared and ready to do whatever was required.”

Some damage has yet to be repaired from the twister that hit the base June 16, 2017. It was one of six tornadoes that struck Nebraska in the late afternoon and early evening, and one of two that touched down in eastern Sarpy County. Base officials said it was the first time a tornado had hit the base since 1950 — or, possibly, ever.

A 55th wing spokesman identified the Offutt airman killed in a shooting in the Rising View military housing complex Saturday evening. The spokesman said the other person who died was the airman's wife, but he was not authorized to release her name.

'Her enthusiasm was contagious': Kari Firlik, killed in shooting near Offutt, was a loving mom

Kari Firlik, 35, was killed Saturday in a double shooting with her husband, Tech. Sgt. Zachary Firlik, at their home in the Rising View subdivision near Offutt Air Force Base.

Turning over housing to the private sector doesn't absolve the Air Force from oversight.

Offutt closes base due to 'dangerous weather'

The closure affects the Ehrling-Bergquist medical clinic, lab and pharmacy, as well as on-base child care and youth programs. Offutt's Exchange and Commissary are also closed.

Roofers install a new roof on a Rising View home in August 2017. A tornado and hailstorm that summer forced managers to replace about 1,700 roofs in the community of 1,954 homes, but some residents have complained that repairs have taken up to two years.

Offutt Air Force Base’s Rising View housing area. Offutt has almost 2,000 homes for military families, most of which are in Rising View.