Looking for a loved one? 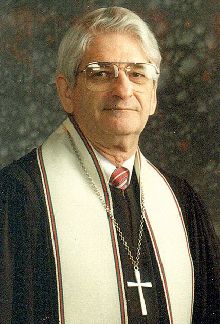 Nelson, Reverend Elbert Leroy "Lee" Jr. 1930 - 2019 Reverend Colonel Elbert Leroy Nelson, Jr. passed away peacefully surrounded by his family, September 14, 2019. Known as Lee, he was born in Lufkin, Texas to Elbert Leroy Sr. and Wilma Madeline Nelson on January 25, 1930. Rev. Nelson was preceded in death by his parents, four siblings, and granddaughter Jamie Jacquellyn Scott. He is survived by his wife of 28 years, Mary Frances Nelson, the mother of his children, Joan J. Nelson, and children Carolyn Nelson-Becker and husband Keith Becker, Mary Hannah Bradley and husband Mark Bradley, Anne Nelson Emmerich and husband Frank Emmerich, Timothy John Nelson and wife Kathi Nelson and stepdaughter Melinda Lowe and husband Jeff Lowe. Also surviving him are nine grandchildren, 25 great-grandchildren, and many nieces, nephews, cousins and friends who loved him. Rev. Nelson was raised in Worthington, Ohio and graduated from the Ohio State University and Princeton University Seminary, and the University of Nebraska at Omaha. He began his career as a Presbyterian minister in the United States Army as a Chaplain in 1955 and rose to rank of Colonel through his active duty and reserve Army years. His first civilian church was in Dalton, Nebraska. Then with his wife and four children he moved to Seoul, Korea to minister to American Service Personnel through the National Council of Churches. In 1967, the family moved to Omaha, Nebraska and Miller Park Presbyterian Church. In his long and varied career, he served other churches in Omaha, Nebraska; Columbus, Mississippi; Decatur and Mattoon, Illinois; Carrollton, Massillon and New Philadelphia, Ohio; and Gonzales, Texas. He also served as interim college president to Mary Holmes College in West Point, Mississippi. After "retirement," Rev. Nelson and his wife Mary Frances moved to their ranch outside of Harwood, Texas. Lee raised polled Hereford cattle and continued to serve churches in the area when needed including the Presbyterian church in Luling. The family joked that his Herefords were the most pampered breeding cattle in Texas and all enjoyed many fun gatherings of family and friends at the ranch. Those years included many happy memories. In the Spring of 2018, Lee and Mary moved to Galveston, Texas to be closer to family. They have been lovingly embraced by the First Presbyterian Church family in Galveston and by all who have met them. Lee loved God, his family, his cattle ranch, the US Army, a good bargain, Ohio State football, roses, Snoopy, cowboy movies, John Wayne, his "cottage" at Lake of the Woods in Ontario, Canada, dogs, fishing, mashed potatoes, lemon meringue pie and donut holes. A MEMORIAL SERVICE at First Presbyterian Church in Galveston will be held Saturday, September 21, 2019 at 11am. All are invited to a reception following the service in the church fellowship hall. In lieu of flowers a scholarship fund in his name has been created at Princeton University Seminary. Donations may be made to Princeton Theological Seminary in memory of Reverend Elebert Leroy Nelson Jr. J. LEVY & TERMINI FUNERAL HOME 2128 Broadway St., Galveston, TX 77550 (409) 763-4621 | www.jlevyfuneralhome.com

Add an entry as Guest

THANK YOU for helping us ensure that all guest book entries are positive and considerate. If you see a negative or inappropriate comment, please click on the link in the comment to report it, and a staff member will follow up immediately.

How to submit an obituary or in memoriam notice

Funeral homes often submit obituaries as a service to the families they are assisting. However, we will be happy to accept obituaries from family members pending proper verification of the death.

Click the link below for rates, deadlines and the form to submit an Obituary or In-Memoriam ad to the Omaha World Herald. All Obituaries and In-Memoriam Ads are paid notices. The link is available for family members or funeral homes. If you have any questions, please contact us at: WHobits@owh.com or call402-444-1286.

Enter a full name, a last name (confirm the spelling) and/or keywords in the search box.

If your search is unsuccessful, try removing the first name. The person's known name may not be the name on record.

Try adding quotation marks to a keyword phrase for an exact match, or simply search by date or date-range for broader results.

Offer a personal message of sympathy...

You'll find individual Guest Books on the page with each obituary notice. By sharing a fond memory or writing a kind tribute, you will be providing a comforting keepsake to those in mourning. From a Guest Book, you may log in to leave a message. If you have an existing account with Omaha.com, you may log in with that. Otherwise, it's simple to create a new one by clicking "Log In" on the "Sign the guestbook" portion of each notice and following the simple steps on the sign-up page. You can also click here to register, then return to the desi

Local businesses ready to help with your next project

Now is the perfect time to do your homework.  Here is a guide to local businesses ready to h…