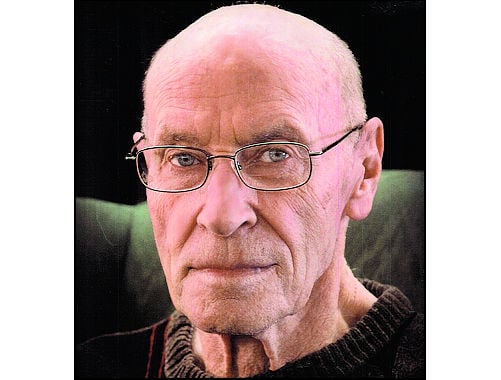 Matula, John James Apr 2, 1931 - Jun 30, 2015 John James Matula, age 84 of Glenwood, IA entered into eternal rest on June 30, 2015 at the Hospice with Heart facility in Glenwood. John was born April 2, 1931 in Toledo, IA to Ann (Herink) and James Matula. John was the oldest of 5. John joined the Air Force in February 1952 where he served 4 years in Spangdolem, Germany. He was honorably discharged as Sergeant 1st Class. Upon his return, John met Phyllis Nilius at a dance. They were married July 27, 1957. From their union, they had 5 kids and enjoyed 53 years of marriage. John had several jobs, but his career started when he was hired by the Army Corps of Engineers as a photographer. He retired in 1988 after 30 years of service ending as supervisor of security for the Corps regional dams. He is preceded in death by his wife, 2 brothers, a sister and a grandson. He is survived by his children, Tim (Dana) Matula of Glenwood, IA, Chris (Suzanne) Matula of Kimberly, WI, Joan (Patrick) Dougherty of Berthoud, CO, Julia (Richard) Connely of Roach, MO, Valerie (Allan) Schuld of Glenwood; a brother Jim Matula of Omaha, NE; 11 grandchildren and 1 great grandchild. A CELEBRATION OF LIFE will be held Saturday, July 11, 2015 at 10:30am the First Christian Church, 202 N. Vine St, Glenwood, IA with the family available for visiting one hour prior to the service. BRAMAN MORTUARY - 72nd St. Chapel 1702 N. 72nd St. 402-391-2171

He had a great life and filled up the world with his love by his children and grandchildren.

Thoughts and prayers are with your family during this time of sorrow.
Friends from Victoria Gardens,
Gloria Hunt
Joni Hunt Rasmussen