The image Randy Essex paints of the Nebraska State Penitentiary decades ago, speaks significantly to the need for a new prison facility. As noted in “A family story about addiction, prison and why reform matters” published Feb. 8, 2022, clinical treatment, education and other opportunities all contribute to better outcomes for those who are incarcerated.

Those outcomes are significantly enhanced when provided in the proper environment. The penitentiary was never built for that. It is a facility that has made do with what was available and has suffered from a lack of adequate classrooms, dayrooms, event and activity space.

Since I became director of the Nebraska Department of Correctional Services in 2015, we have made significant progress in providing programs that set up incarcerated individuals to succeed when they return to the community. I recently gave a presentation to the Reentry Alliance of Nebraska in which I discussed how a positive setting can influence outcomes and contribute to the well-being of those who are incarcerated. A new, modern, well-designed, technologically advanced facility will do just that, while also providing the safety and security that is paramount.

Identifying clinical needs begins soon after entry to NDCS. Getting someone into the necessary treatment program prior to parole or release is a priority. As of November 2021, 85% of the parole eligible population had completed or were enrolled in a recommended clinical program. Those remaining were either offered the opportunity and refused, failed to complete, or engaged in behavior that impeded their ability to be accepted into or remain in treatment.

This speaks to the challenges faced by many who are incarcerated. Addressing issues like substance use or illegal sexual behavior is never one and done. It is a continuum of stops and starts, successes and failures that last the entirety of someone’s life. The temptation to revert to old habits is ever present. Treatment is a path to recovery. There is no cure.

In correctional settings, clinical treatment provides a foothold. It lays the groundwork for what needs to continue in the community. Giving individuals a proper environment for initiating that change is the best thing that we can do. The mission of NDCS is: Keep people safe. Rehabilitation is an important part of that mission.

Getting there will be all the more difficult, unless we invest in a facility where healthy change can happen. Otherwise, we are selling ourselves short, including the more than 2,500 men and women who discharge annually from NDCS.

Midlands Voices: On abortion, faith calls us to see nuance; not one size fits all

Darryl Brown Jr. writes: "Nuance belongs in the conversation around abortion; our faith does not always require an 'either/or' mentality."

Gov. Pete Ricketts writes: "State law declares 'the will of the people of the State of Nebraska and the members of the Legislature to provide protection for the life of the unborn child whenever possible."

Midlands Voices: What candidate is strong enough to stand up for democracy?

Gwenn Aspen writes: Will a candidate be a leader who will stand with voters, or will they stand with authoritarians?

David G. Brown writes: "The City of Omaha has taken a giant step forward in providing new dynamic infrastructure that will bring more people, companies and jobs to the very heart of our community."

A Russian invasion of Ukraine would be felt throughout the world, directly threatening Poland and the Baltic States and unsettling global economies.

Midlands Voices: Legislature can be partisan — a bad idea — without constitutional amendment

Ron Jensen writes: "I have no doubt that the political parties would like to have more to say about who serves in our Legislature, as well as what they do when they get there. But Nebraskans have only to look at the U.S. Congress to understand how well that would serve the public interest."

While the role of Omaha may have been brief, its status as a gateway to the west and pivotal role in providing the logistical support made its contribution critical to the success of the hunt.

Pat Loontjer writes: "The economic impact and jobs casinos claim are not in addition to existing local economic activity but in place of it. Gambling dollars do not drop from the sky. They come from local gamblers whose spending patterns change when slot machines move in, at the expense of local business receipts."

Midlands Voices: In fighting COVID, Nebraskans can look back to their leadership in WWII

Kenneth Keith writes: "We once again have the opportunity to rise to the occasion, to come together in the face of adversity."

Gov. Pete Ricketts: "On behalf of all Nebraskans, thank you to members of the Nebraska National Guard for your dedicated service to our state."

Midlands Voices: Omaha is at the crossroads of history; UNO has solutions

Today, our state and our nation both face pressing needs for which the University of Nebraska at Omaha is in a strategic position to provide solutions.

Scott R. Frakes is the director of the Nebraska Department of Correctional Services. 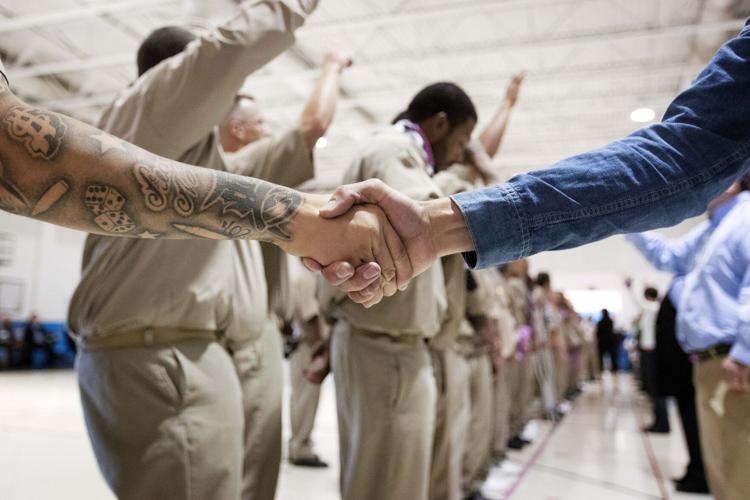 A volunteer shakes hands with an inmate during a character development program at the Nebraska State Penitentiary in Lincoln. 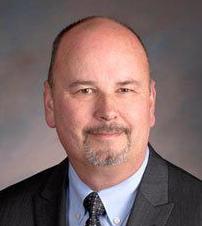