Monday Night Football: Scores and updates from Steelers vs. Colts 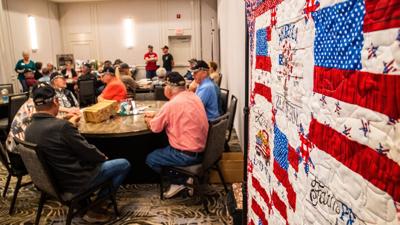 My husband was one of the Vietnam veterans attending the Bravo Company, 1-22 Infantry reunion at the Marriott Regency in Omaha (Oct. 5). First, I want to thank OWH for taking the time to talk with these very special gentlemen.

Several nice things happened during this reunion that they greatly appreciated. There were several sports teams staying at the hotel as well as the reunion.

The football team from Evangel University in Springfield, Missouri, took time to come by the meeting room one night and shake hands with the Veterans. I am sure these special young men have no idea how much it meant to these gentlemen after the greeting they got coming home from Vietnam. Their coach advised us that they did this on their own and he did not suggest they do it.

There was also a group of young soccer players from St. Louis who were there for a tournament and asked if they could meet real war heroes. They were sixth- and seventh-graders and full of ambition. That was also quite special.

Another night, four couples went to the Cheesecake Factory for dinner. As we were sitting there, a couple across the aisle from us kept looking our way.

We have no idea who this couple was but I would like to extend a thank you to them.

Veterans of today have a lot in common with those of WWII, they’re volunteers. Veterans of Vietnam were pressed into service due to greed and folly. They were mostly 18 and 19 year olds who had no connections or money like several of our recent presidents. Those who came back were not welcomed home, but were spit on and called “baby killers.” Back home, the news media described them as having lost the war, when in actuality, they won every major engagement and forced the enemy to the peace table in a war that was not measured by capture of territory and victory but body count (war should be the last resort and victory its only acceptable conclusion). Two years after the war and they left Vietnam, U.S. Marines were brought in to evacuate the embassy when South Vietnam fell. Ho Chi Ming was our ally in WWII, but we sold him out after the war by helping the French to recolonize, leading to Ho aligning with the USSR. This lead to one of the biggest blunders in American history and the loss of over 58,000 Americans. This Veteran’s Day, thank a Vietnam veteran and welcome them home.

I was drafted and served my God and country as a conscientious objector to killing from 1958 to 1960. I received an honorable discharge by my draft board as a selective service participant and in accordance with our pledge and our common goal of “liberty and justice for all.” I have attempted to remain true to that pledge, as have many of my counterparts in the armed forces. Thus, the highest respect I can give to my fallen counterparts and those standing is to continue our quest that there will be “liberty and Justice for all.” This bequest falls on the shoulders, serving or not serving, on every American citizen.

Responding to Fred Taylor’s letter (“Game attendance”) regarding Omaha Storm Chasers, I don’t disagree with his conclusion about the ramification of lowering attendance, but differ on his reasoning. Location of the ballpark is fine considering the metro area is rapidly growing in that direction and there are already enough community attractions downtown. Maybe the lower attendance is due to concession prices, fewer Royals fans than Cubs fans or maybe it’s the quality of play. During a game I attended this year, Chaser players didn’t even hustle to first base on a ground ball or defensively go aggressively after balls hit to outfield. Amongst all the talk about providing a total family experience, the basic experience should included a quality effort by those playing the game. Nonetheless, it would be a tremendous loss to Omaha to ever again be without an organized baseball franchise.

The aviary has been closed since March 2022. Where did this disease come from?

An article entitled ‘Why unprecedented bird flu outbreaks sweeping the world are concerning scientists,’ states “the highly pathogenic H5N1 strain emerged in commercial geese in Asia in around 1996, and spread in poultry throughout Europe and Africa in the early 2000s.” This disease is now killing wild and domesticated birds all across the world!

Eating meat is not necessary according to the American Dietetic Association and the fact 83% of global caloric consumption is plants.

Keith Hamilton, head of the department for preparedness and resilience at the World Organization for Animal Health says “regions with large poultry or migratory bird populations are at high risk of further outbreaks no matter how good their surveillance is.” That’s us now here in Nebraska!

As of right now “virus (bird flu) infections are uncommon” to be transmitted to people, however, Ian Barr, deputy director of the World Health Organization (WHO)-collaborating influenza centre at the Doherty Institute in Melbourne, Australia describes the changing mutations of avian flu as “...ticking time bombs” if there is a “gradual gaining of function” of these outbreaks.

Our unquestioned traditional animal farming practices are noticed by individuals across the world. Thich Nhat Hanh said “every day 40,000 children in the world die for lack of food. We who overeat in the West, who are feeding grains to animals to make meat, are eating the flesh of those children.”

I am so proud of Nebraska. We do not have the Arizona problems of guns at polling places and racial intimidation. When other states resist having other people vote, our Douglas County kept a West Omaha polling place open beyond the deadline of 8 p.m. Instead of Arizona vigilantes, voters were comforted by the presence of our sheriff’s department. Nebraska can be proud of our elections.

Public Pulse: Pulse writers weigh in on candidates and issues prior to the Nov. 8 general election.

Pulse writers weigh in on candidates and issues prior to the Nov. 8 general election.

The Public Pulse: Pulse writers give their support on candidates and initiatives

Pulse writers give reasons why they support various local candidates and initiatives.

The Public Pulse: Education is on the ballot

Pulse writers through their support behind local school board and State Board of Education candidates.

Jim Pillen must let the voters know where he stands on the issues, Pulse writer says.

The Public Pulse: Writers give their support to local candidates

Pulse writers give reasons why they support various local candidates.

Is it necessary to coin an offensive name for someone in order to run against them, Pulse writer asks.

Pulse writers say regardless of party, candidates should participate in debates.

An increase in government spending is a must to reduce the telling effects of a recession, Pulse writer says.

Mr. Pillen, please explain why you are not completing your application for the job as governor, Pulse writer says.

The Public Pulse: The key is to vote; Lauritsen gets real results; FliPTHiS

Pulse writer says the nonviolent key to enacting change in our government is your vote.

Pulse writer is concerned with the wording of Initiative 432 on the November ballot.

Pulse writer says railroads are vital and the best way to stay safe is by strictly obeying crossing warnings and gates.

As Nebraska Department of Correctional Services Director Scott Frakes prepares to retire, he expresses his appreciation and thanks NDCS staff for their hard work and commitment during the past eight years.

The Public Pulse: LD 31 In good hands with Kauth; Disagreement does not equate to hate; School board elections

The state should be required to provide a free valid photo ID to any voter who doesn’t have one, a Pulse writer says.

The Public Pulse: Democracy at stake; Take a deeper look; Bacon entitled to use rank

Pulse writers give their thoughts on Trump's political inquiries and legal issues related to his time in office.

Pulse writer has questions regarding the purpose and implementation of Voter ID.

Pulse writer says the acts of some "professed" Christians, are giving other Christians a bad name.

Pulse writers weigh in on the pros and cons of voter ID in Nebraska.

Pulse writer ponders the idea of shortening the timeframe for political campaigning and fundraising.

The Public Pulse: Bullying and name-calling; Biden's overreach; Thank you from a veteran

Pulse writer wonders if society has accepted bullying and name-calling as normal.