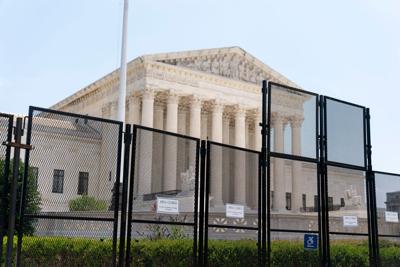 Seventy percent of Americans, including a notable percent of Republicans, support the right to an abortion. Unfortunately, the United States is not a democracy.

A man who lost two elections by more than 10 million votes got to pick three Supreme Court justices. All three nominees lied during their confirmation hearings, saying “Roe v. Wade” was settled law. They have now decided to “un-settle” it, and discard the 50-year-old precedent.

By a 5 to 4 margin, the court has decided, similar to Dred Scott v. Sandford, that states have more rights than individuals. Dozens of states with male-dominated state legislatures have already decided that all embryos must be carried to term, including those of 11-year old girls, deadly ectopic pregnancies, and victims of rape and incest.

The state legislators making these decisions inevitably identify as “Christian” and now require you to live by their beliefs, or go to jail and/or face fines. The “faithful” definitely know more about your medical situation than you or your doctor.

The United States is no longer a democracy, we are a theocracy. Theocracies cannot be democracies. They do not allow for other viewpoints. I do not tell “Christians” how to live their lives, but they want to require me and my doctor to abide by their tenets.

To add to this misery, one Justice, who happens to be married to a highly-connected seditionist, has indicated he would like to use this same logic to overturn other already-granted rights, like same-sex marriage.

Now that church and state have united, can churches start paying tax? At least the Christian variants who are making of our medical decisions?

I am finding the outrage of our federal politicians over oil and meat prices and formula shortages to fall somewhere between laughable and insulting. When our politicians make it obvious they are hostile toward oil drilling/refining, why be surprised when no one will invest in additional capacity and prices increase?

When the tax code encourages investing money in buying other companies (and firing employees) versus investing in research and development (creating new jobs), why would anyone be surprised that oligopolies result?

The very predictable results are formula shortages because only three companies produce baby formula or rising food prices due to a lack of competition in meat processing. To members of the legislative and executive branches on both sides of the aisle, instead of going public with your outrage, sit in on a high school economics class the day they talk about supply and demand.

Save your outrage for the mirror.

I support Frank Logan’s plea (Pulse, June 25) to refuse to sign the petitions which will add a photo ID requirement to the right to vote. Frank accurately depicts the roadblocks which make it difficult for the elderly and disabled to obtain a photo ID. It is also an unnecessary financial burden for anyone receiving Medicaid benefits and limited to $50 income each month. As Frank stated, there is no evidence of widespread voter fraud. If the voter ID requirement does make the ballot, I strongly urge a “no” vote.

After reading Frank Logan’s recap (“Photo ID requirement,” June 25) of the many obstacles he had to overcome to obtain a state-issued photo ID for his mother-in-law, I am even more ashamed of my action a couple of weeks ago.

In a local grocery store parking lot, I was approached by a young man to sign a petition regarding the photo ID requirement to vote. I declined and he responded that it was “just to get it on the table for discussion.” Of course I wanted more discussion on this issue and so I signed.

The following day, the World-Herald featured an article in which Sen. Carol Blood stated that some petition workers were handing out false information when explaining the purpose of the petition.

I am ashamed that I believed what this young man said, or what he had been told to say, and signed. So, in Frank’s words, if you’re offered a chance to sign a petition requirement to the state constitution, please don’t sign it. If it makes it to the ballot, please don’t vote for it.

The public should consider how poverty has been constant for years. It has never been easy and has created difficult living situations for many developing countries. More changes need to occur. Families and children’s lives are at stake. Foreign aid will be beneficial for many vulnerable people if it is increased. Huge funding will likely improve so many lives.

Are we not all humans that deserve essential needs? How can we make an impact on reducing poverty?

If everyone stands together and helps one another, it would be less difficult to accomplish. Developed countries like the U.S. have made some impact, yet COVID has also made a huge negative impact. When we increase aid to help vulnerable families, it also benefits the job market and economy of United States.

The Borgen Project, a nonprofit organization, are providing the help to combat poverty. You can also help make a difference. Your help is also encouraged by contacting, Sen. Ben Sasse, Sen. Deb Fischer and Rep. Don Bacon to support the international affairs budget.

Congressman Bacon can best be described in two phrases: common-sense and problem-solving. Being ranked 12th in the House of Representatives for bipartisanship and being recognized as the most bipartisan elected official in the country by the Common Ground Committee makes Don Bacon the only fit representative for Nebraska’s 2nd Congressional District. His “across-the-aisle” efforts have left Nebraskans and the United States better off.

While facing an increasingly polarizing and partisan environment, Congressman Bacon has risen above and facilitated respectful, thoughtful, and practical conversations to provide results for his constituents. In fact, as the President of the Nebraska High School Republicans, I can confidently say that our members follow Don Bacon’s lead in debating respectfully and constructively to move our society and community forward. Vote for Don Bacon!

The Public Pulse: Abortion is a weapon against the voiceless; Mutual plans; Gun control

Pulse writer says abortion is not exclusively a female issue.

Pulse writers sound off on the overturning of Roe v. Wade.

The Public Pulse: Voting against your own interests; Politicians should look in mirror; OPS superintendent raise

Pulse writer says Nebraska will not improve unless people stop voting against their own interests.

The Public Pulse: Consider TIF moratorium; Round of applause for Pulse writers

The Keystone XL Pipeline would not have helped with gas prices as much as some may think, according to Pulse writer.

The Public Pulse: Bacon is letting us down; Rioters not patriots; A different time

Pulse writer says Don Bacon will never stand up to Trump, so it is time for a change.

The Public Pulse: Lifesaving legislation; What about the homeless?; Morals and money

Pulse writer urges you to contact your Senator to support gun safety legislation.

Spending $4,500 on each OPS staff member is a waste of tax payer dollars, Pulse writer says.

Pulse writer says raising the minimum wage helps give every Nebraskan the real chance to achieve the “American dream.”

The Public Pulse: Honestly, it is for everyone; Parental control; Administration is failing us

Pulse writer has a recommendation for Nebraska's tourism slogan.

The Public Pulse: Where are the books?; Politicizing Bellevue School Board; Streetcar skepticism

Pulse writer questions if there will be room for books in Omaha's proposed public library at 72nd and Dodge Streets.

The Public Pulse: Don't miss 'The Sound of Music'; Vargas understands the difference; Science is solution

Pulse writer says hurry to get tickets for "The Sound of Music" at the Rose theater.

The Public Pulse: Where are our leaders?; Unregulated gun ownership; Terrible plate design

Pulse writer wants to know what elected leaders are doing about gas prices.

Pulse writer remembers the voice of the CWS, Jack Payne.

The Public Pulse: Dejka article enlightened; Go back to the old plates; Praise for Viking Battalion

Pulse writer says as a country we still lack the will to do what is necessary to address mass shootings and school safety.

Pulse writer asks what rights should outweigh others?

The Public Pulse: Need for Second Amendment; Praise for veteran articles; Who does Ernst represent?

The Public Pulse: Urban core is all the rage; Love one another; Gun reform

Pulse writer has a few concerns about the city's urban core plans.

The Public Pulse: Sad reality; Loss of a child; Leave assault weapons to the military; A people issue

Pulse writers continue to discuss the violent deaths from mass shootings and how they affect us all.