Cougars fight back, fall short against SkyHawks
Share this
1 of 3 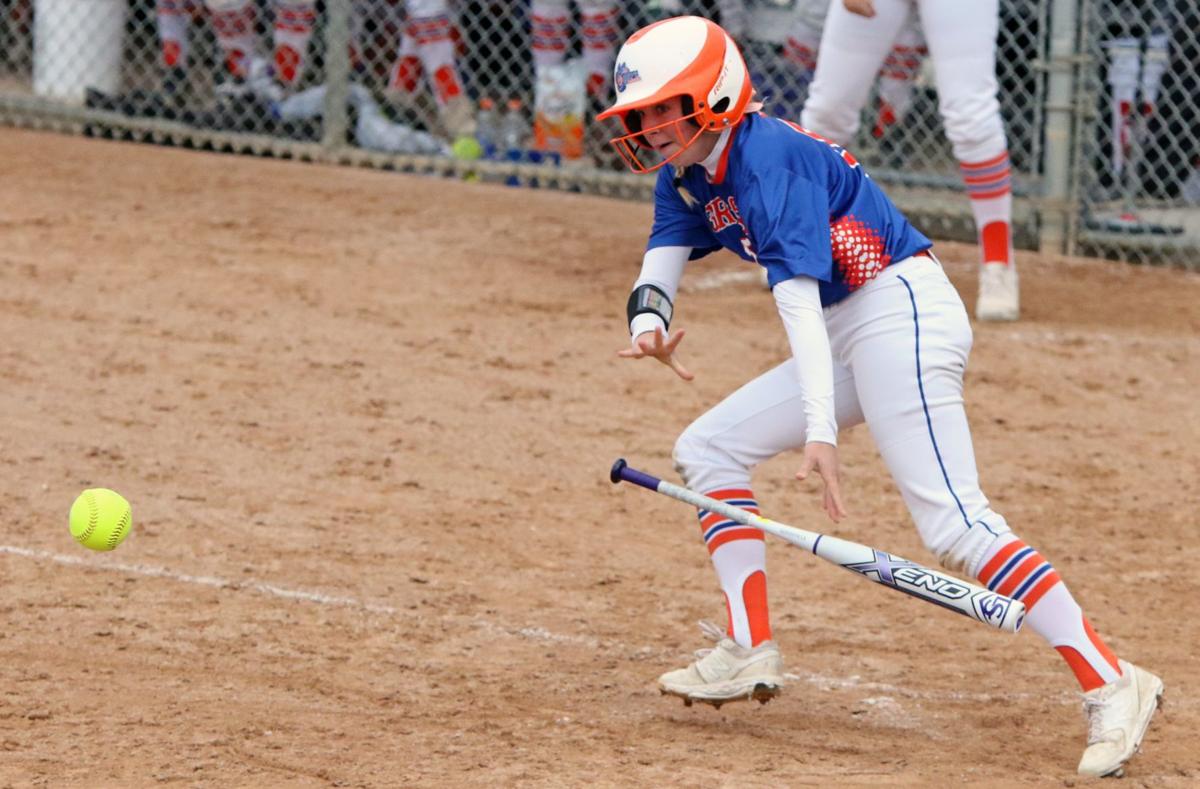 Callie Billings of Gross drops the ball after laying down a bunt that resulted in a hit during state softball Oct. 10. 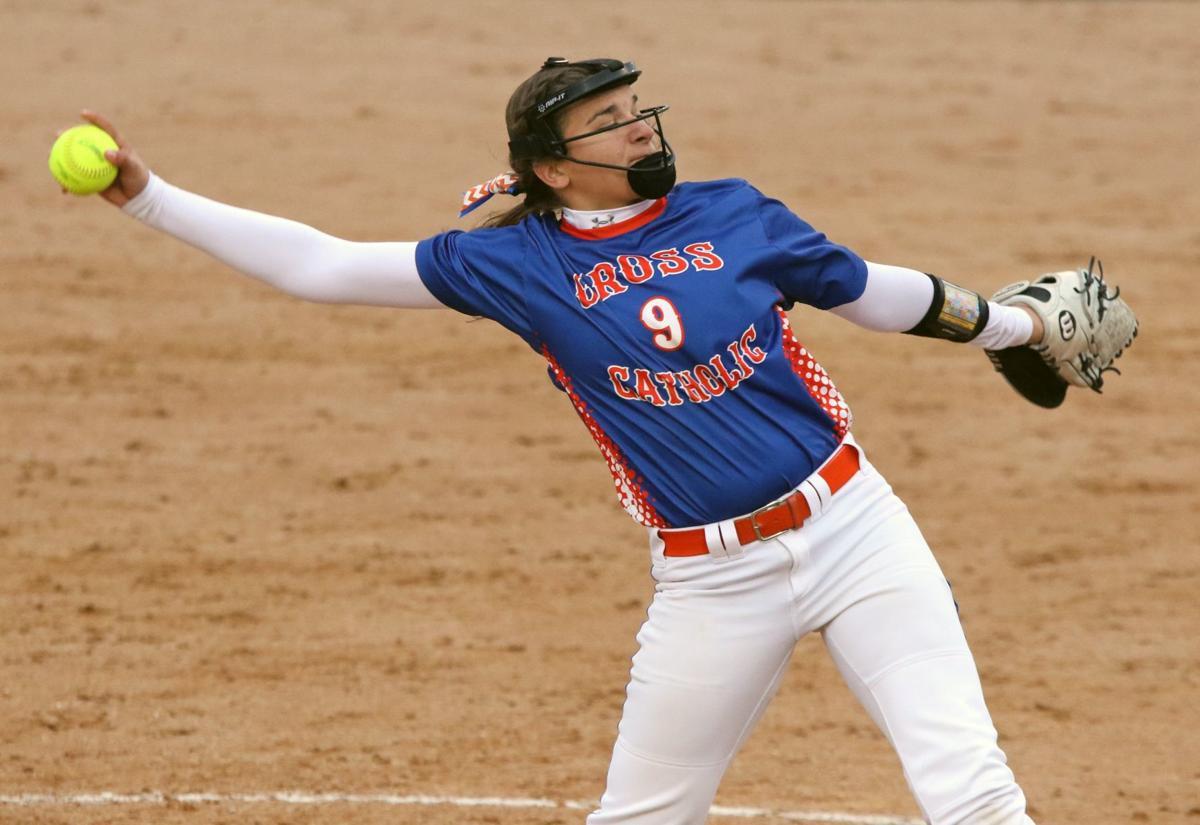 Photo by Joey Waller Jenna Skradski of Gross rears back for a pitch during the state tournament. 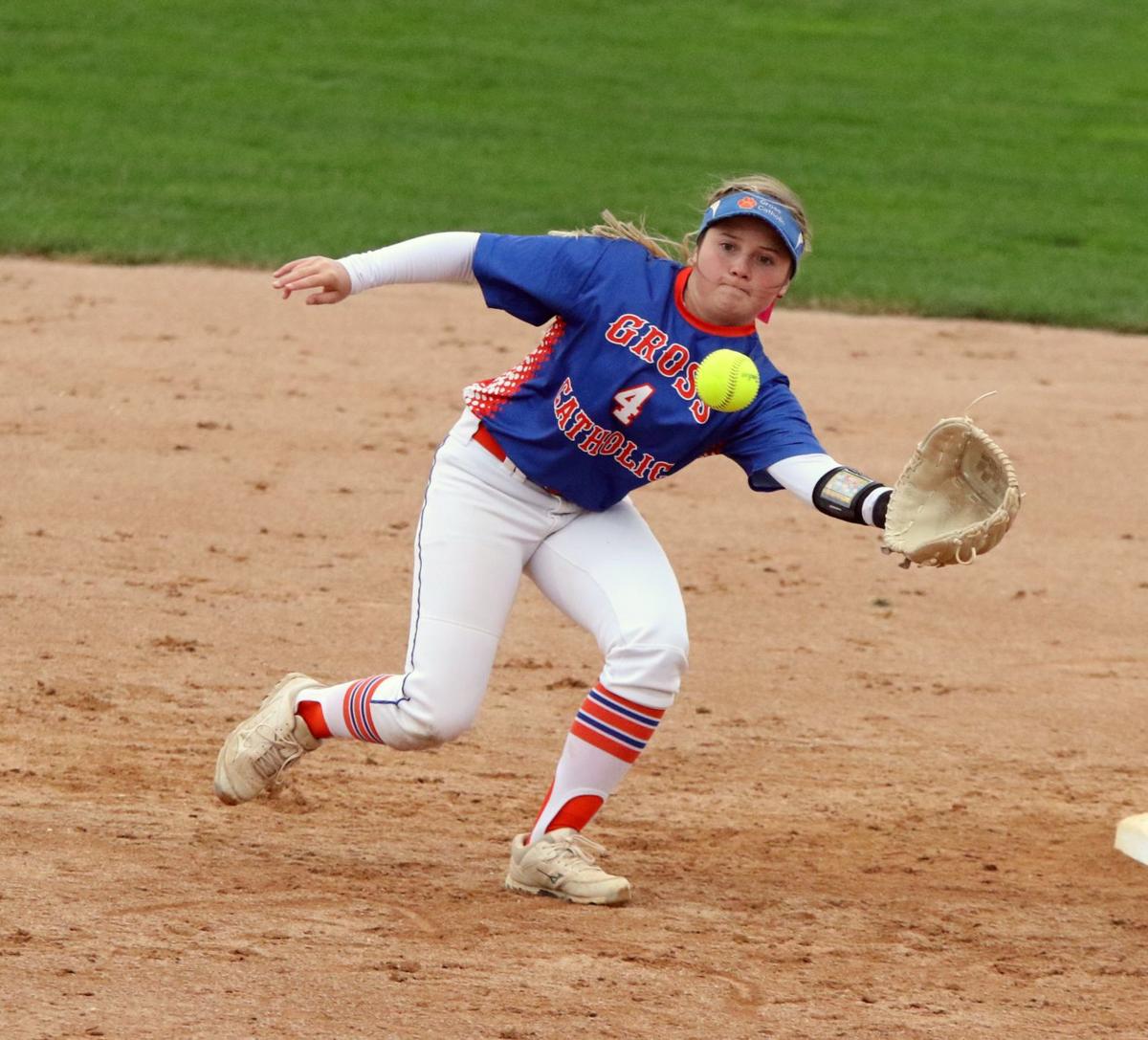 Photo by Joey Waller Mackenna Sidzyik of Gross looks in the ball during the Oct. 10 battle with Skutt during the Class B state tournament.

Gross fell behind and couldn’t recover in its first state tournament game since 2008.

Skutt held on for a 7-3 victory over Gross in the Class B softball opener Oct. 10 at Hastings. Despite falling down early, the Cougars never backed down.

Skutt took a 2-0 lead after the first inning by scoring two runs on two hits before adding three more in the bottom of the second, thanks to four hits, to push the lead to 5-0 entering the third.

Gross lead-off hitter Abbie Jo Gaube blasted a home run in the top of the third for the first Cougar hit to make it 5-1.

“That’s why she’s in the one-hole,” Jacobson said. “She’s become a great leader and we know we can count on her.”

In the bottom of the third, Jenna Skradski replaced her sister Jordan Skradski at pitcher. Jenna Skradski pitched two straight scoreless innings to send it to the fifth still at 5-1.

The Cougars have used four pitchers throughout the season and their diversity came in handy at state.

“All four pitchers we have bring something different to the game,” Jacobson said. “Skutt was timing up Jordan pretty good so we decided to go to Jordan for a change of pace and she did really well.”

Callie Billings and Raegan Hughes each reached on a bunt to start the fifth before Rachel Jacobson bunted the pair into scoring position. After a strikeout, Gaube came through again with a two-run single to make it 5-3.

Billings started the seventh with a single but the next three Cougars were retired to end the game.

Despite the loss, Jacobson knew her team wouldn’t give up.

“I love this team’s unity and they’re a family,” she said. “I know they won’t give up and they’ll keep fighting.”

That fighting spirit showed as the Cougars won two straight elimination games to reach the final four before falling to Beatrice. The Cougars end the season with a 19-12 record.

Gross 12, Blair 6 — After falling down 4-0, the Cougars surged for a six-run fourth inning to take the lead. Karlie Chonis started the fourth with a solo homer run before Jordan Skradski added an RBI single. After a Gaube walk, Abby Dickey clubbed a grand slam to put Gross ahead.

Blair tied it at 6-all after the top of the fifth before Jenna Skradski hit a solo homer to put Gross up for good in the fifth.

Gross added five runs in the bottom of the sixth to close out the win.

Gross 12, Hastings 11 — The Cougars reached the final four of Class B after Chonis hit a two-run walk-off home run in the eighth inning.

The Cougars led 6-0 entering the fifth, where the Tigers posted five runs. Gross responded to push its lead to 9-5 entering the seventh when Hastings scored five more runs to take a 10-1 lead into the bottom of the seventh.

In the top of the eighth, Hastings used two walks to take an 11-10 lead. Dickey started the Cougars’ inning on second and the first batter was retired to set up Chonis’ two-run shot.

Dickey and Hughes also hit homers in the win while Dickey and Chonis combined for five hits and seven RBIs. Hughes and Jenna Skradski each drove in a pair runs.

Beatrice 7, Gross 6 — The Cougars’ state tournament run came to a close in heartbreaking fashion. Gross led 6-3 entering the bottom of the seventh before the Lady Orange scored four runs for the walk-off win.

The inning started with a two-run home run before an RBI double and sacrifice fly ended the Cougars’ season.

The Cougars trailed 2-1 after the fourth but plated three runs in the fifth. Sidzyik started the scoring in the with an RBI double before scoring on a bases-loaded walk drawn by Hughes. Ellie Zoucha also drew a walk to score a run.

RBIs by Jenna Skradski and Dickey in the sixth and seventh, respectively, gave the Cougars a 6-3 advantage entering the bottom of the seventh.

Callie Billings of Gross drops the ball after laying down a bunt that resulted in a hit during state softball Oct. 10.

Photo by Joey Waller Jenna Skradski of Gross rears back for a pitch during the state tournament.

Photo by Joey Waller Mackenna Sidzyik of Gross looks in the ball during the Oct. 10 battle with Skutt during the Class B state tournament.