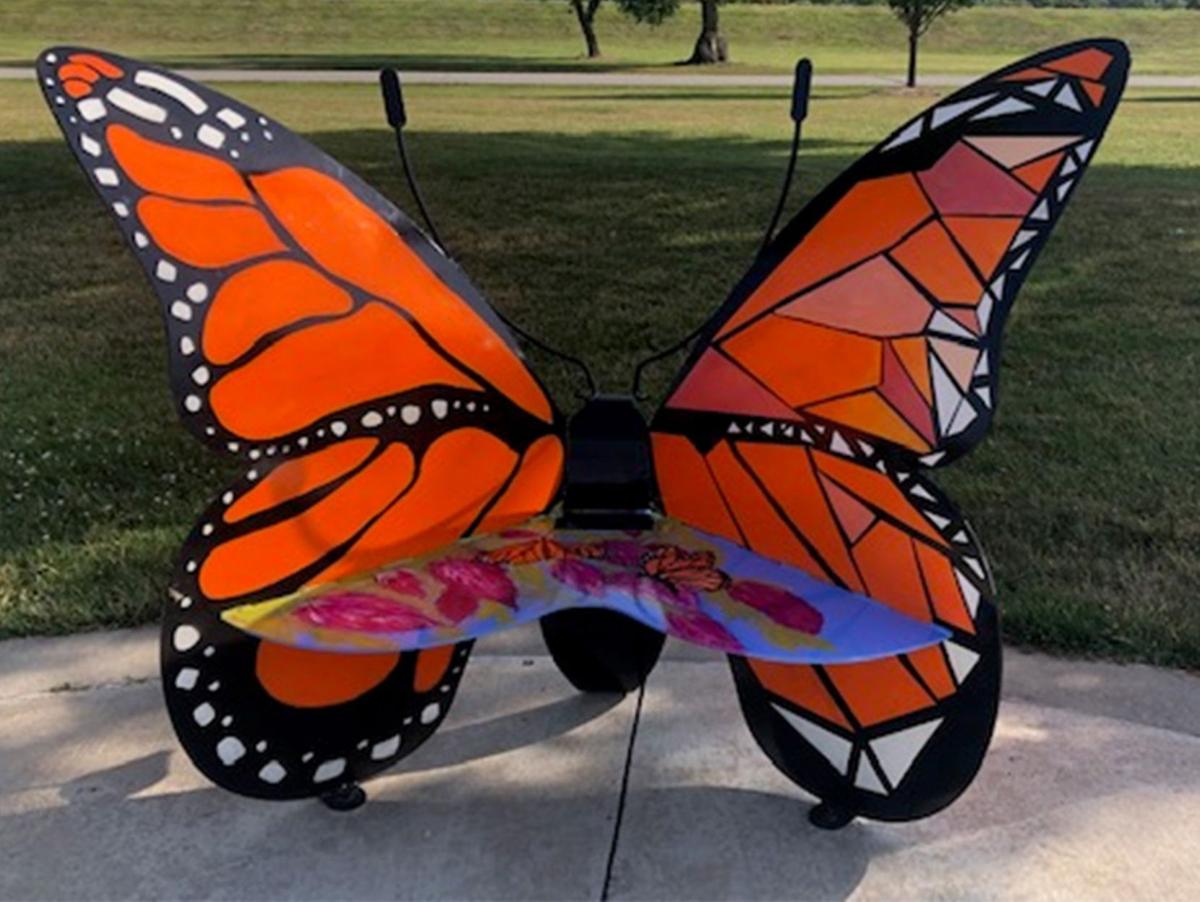 This Bench located at Halleck Park, is dedicated to Meredith Schleicher, a lifelong Papillion resident. 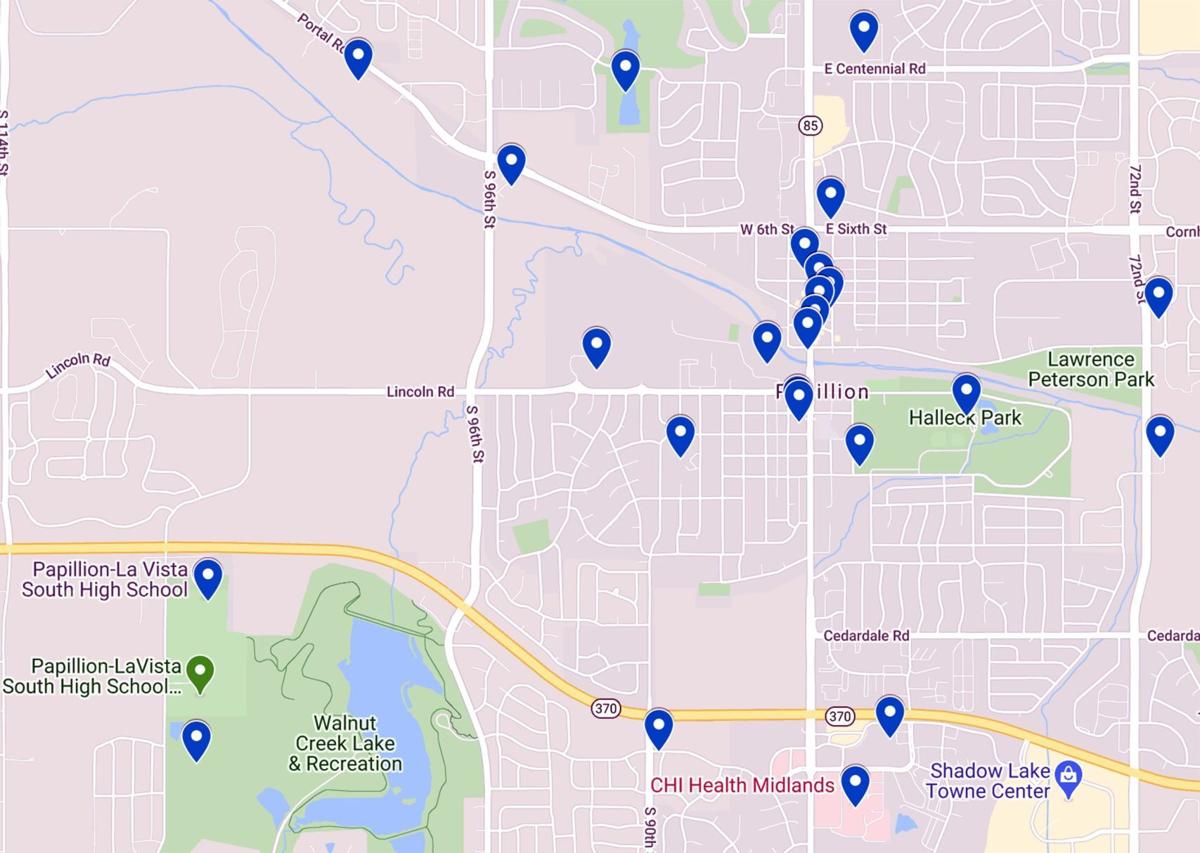 Some of the Papillion 150 butterfly bench locations marked around the city. 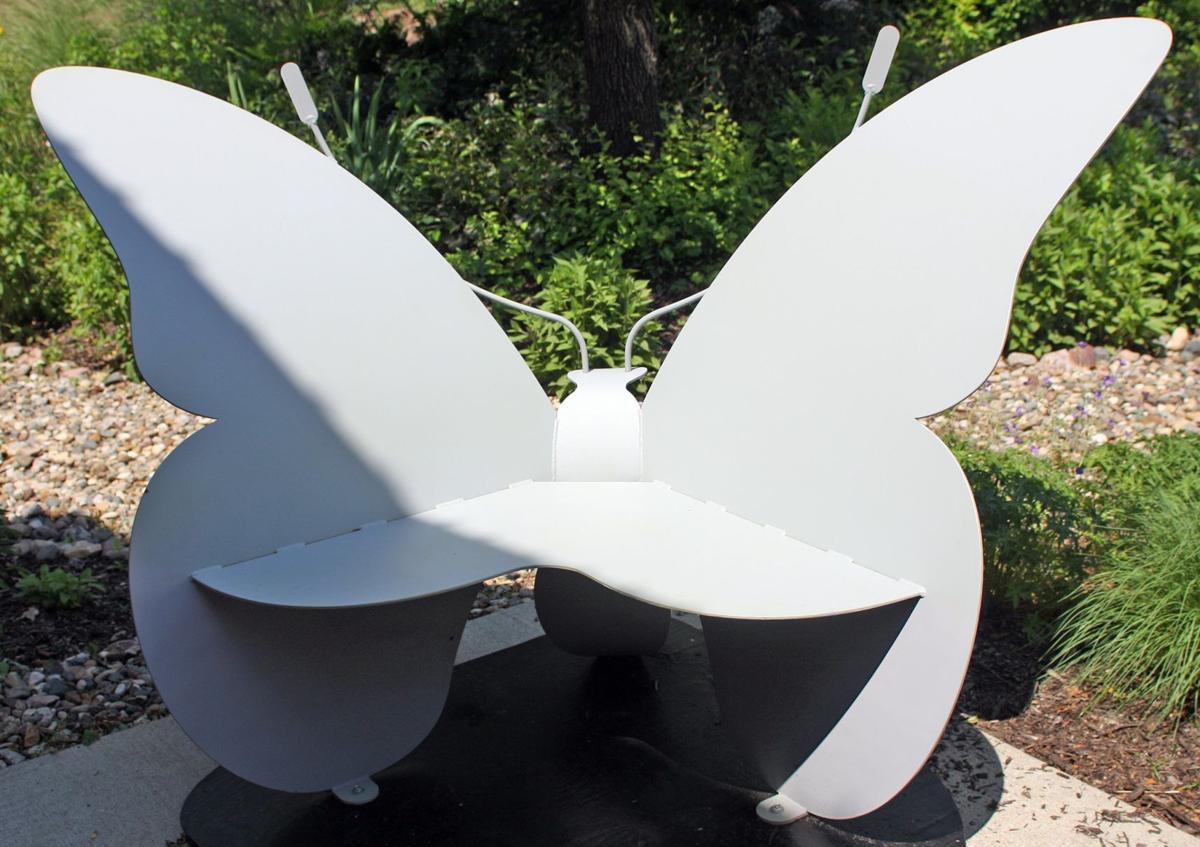 Butterfly benches are part of the city’s 150th birthday celebration.

Butterfly benches have been spread throughout Papillion as part of the “Wings Over Papillion” butterfly bench public art project.

Out of the 34 butterfly benches, one at Halleck Park overlooks the water and serves as a memorial to an artist, mother, wife and friend in Meredith Schleicher.

Schleicher, 40, died Aug. 15, 2019. She was a lifelong Papillion resident who embraced her city and everything it stood for.

Schleicher graduated from Papillion-La Vista High School in 1997 and after two years at the University of Nebraska-Lincoln, returned to get her degree in graphic arts from Metropolitan Community College.

She was a third-generation welder, like her father and paternal grandfather, and soon found her niche creating art pieces from metal.

The group behind fundraising for the bench marked 28 on the bench map was Schleicher’s 1997 graduating class.

One of Schleicher’s PLV classmates, Brian Boone, said art runs in her family and was the one who was always kind of the life of the party with a sarcastic humor to boot.

“She (Meredith) was well liked by a lot of people,” Boone said.

“I think that kind of showed when it came to asking for donations for the bench that I had all different kinds of people, especially from high school and family members that were reaching out to send in donations and offer support or help,” Boone said.

He said the PLV Class of 1997 has a Facebook page where announcements of people passing, either former teachers or classmates, are becoming more frequent as time moves forward.

“I put the GoFundMe on there and it took off really quickly — a lot of people donated and it was a great project,” Boone said.

The bench project was formulated in part by Schleicher’s father, Albert Rhea, a well-known welder and artist in the Papillion area.

“She was going to help him with it but unfortunately she passed before she can really have a part of it,” Boone said.

Rhea and Schleicher’s daughter Rhealynn were the artists behind the butterfly bench in front of Sump Memorial Library.

“I taught her how to spray paint, some of the highlights on that butterfly out there, the orange parts, we taped them off and she sprayed them and then she painted on white decorations around that butterfly,” Rhea said.

Boone and the rest the Class of 1997 thought a butterfly bench would be a good representation of Schleicher, a butterfly enthusiast.

Schleicher had butterflies released at her wedding.

Boone would meet the eventual artist of Schleicher’s bench, Lilly Roberts, in December 2019.

“She and I kind of came up with an idea of trying to have something that symbolizes the mother and daughter because of the relationship between Meredith and her daughter, Rhealynn,” Boone said.

When the bench was finished it was titled, “Gone, Not Forgotten.”

Boone said he is excited to one day take his daughters down to see the bench and explain the importance of it.

“It’s a reminder, too, that we can see it and you know that a little part of her is still here,” Boone said.

Crowned Jewel Salon is the newest gem in Ralston.

The Anderson Grove Quails just welcomed a new member to the nest.

The Papillion Downtown Business Association is in new hands.

This Bench located at Halleck Park, is dedicated to Meredith Schleicher, a lifelong Papillion resident.

Some of the Papillion 150 butterfly bench locations marked around the city.

Butterfly benches are part of the city’s 150th birthday celebration.