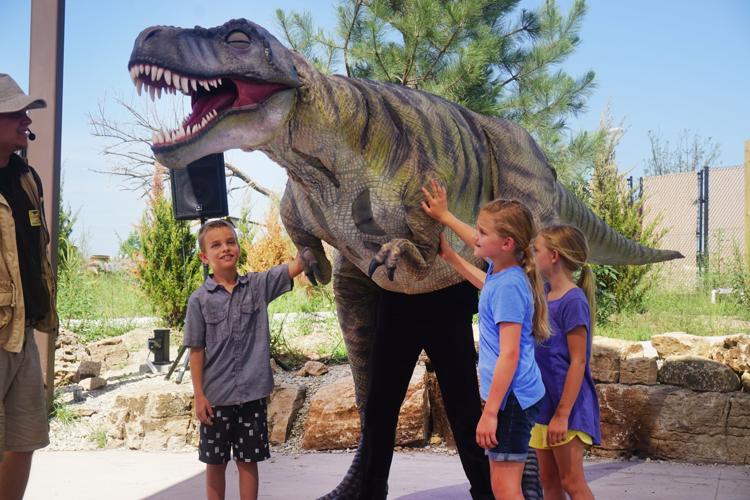 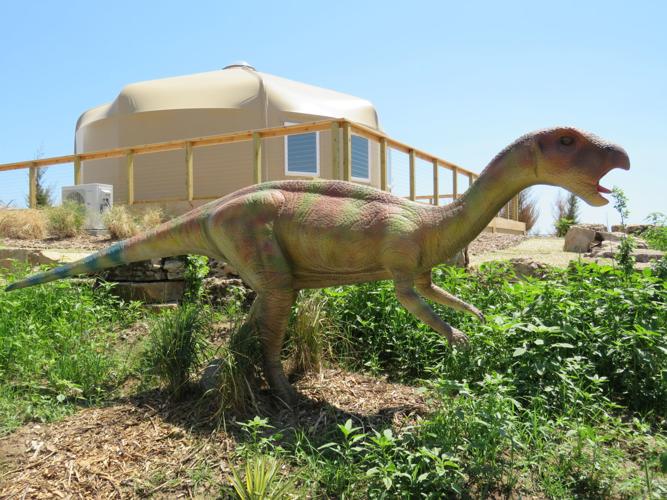 An Arkansaurus at Field Station: Dinosaurs. 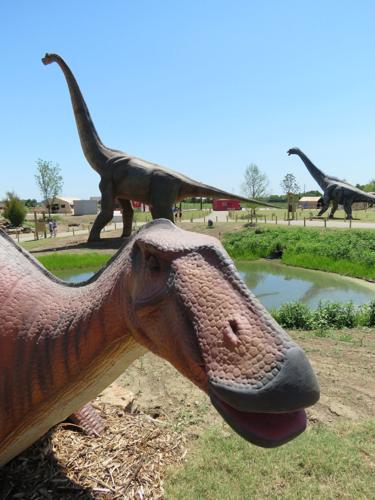 An Edmontosaurus at Field Station: Dinosaurs. In addition, its fossils can be found at the Museum of World Treasures in Wichita. 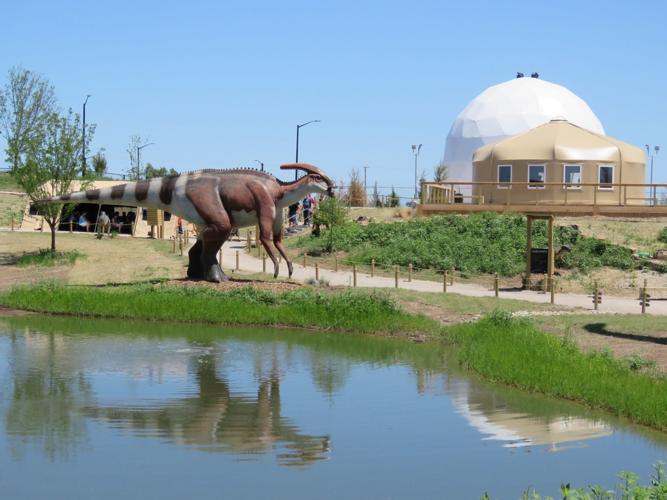 A Parasaurolophus hangs out near a watering hole at Field Station: Dinosaurs in Derby, Kansas. 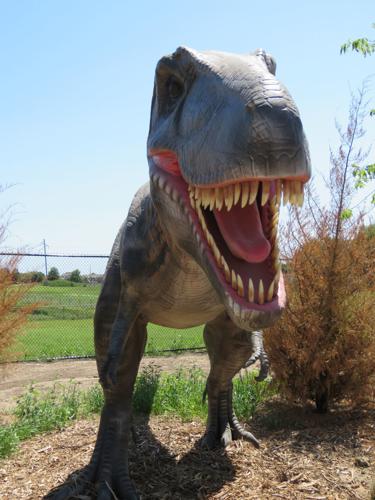 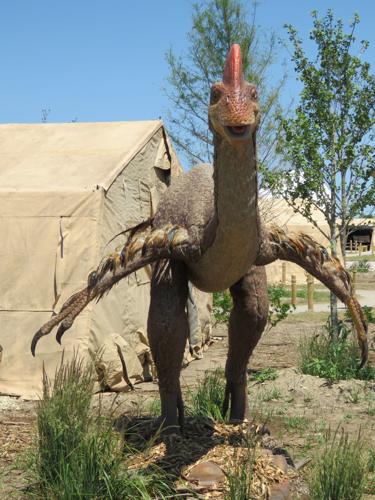 The Anzu was discovered in the early 2000s in South Dakota, Montana and Wyoming. 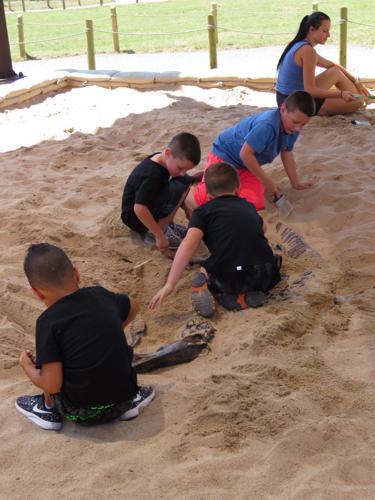 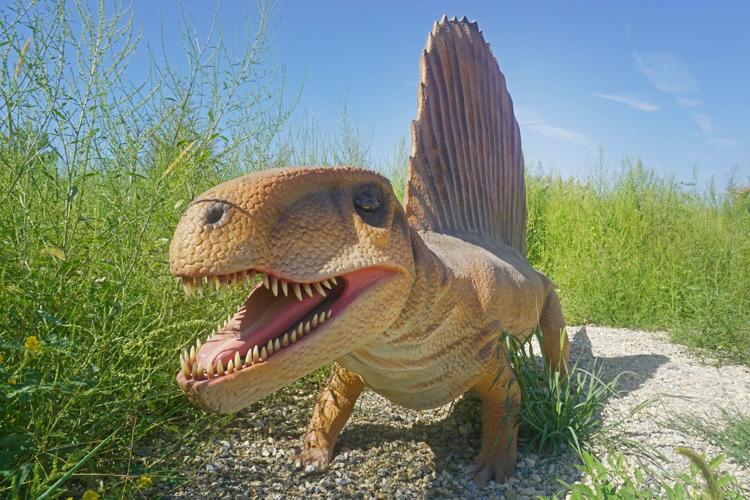 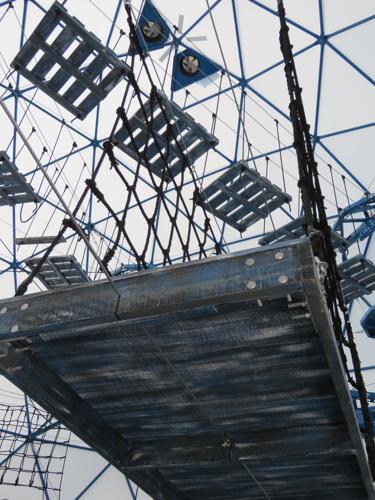 Visitors can challenge themselves on an obstacle course at the dinosaur park.

You can take your own Jurassic adventure without fear of becoming an entrée for a T. rex at a theme park in Derby, Kansas. Field Station: Dinosaurs offers up-close encounters with more than 40 lifelike prehistoric creatures.

The 14-acre park, about 20 minutes from downtown Wichita, opened in May 2018 and is a second Field Station: Dinosaurs. The original park in Leonia, New Jersey, opened in 2012. Each is a Paleozoic world of mystery, learning and thrills.

There’s a base camp and an archaeological dig. The dino trail is about a mile long and leads through “habitats” of foothills, valleys and greens. As you make your way, various animatronic plant-eaters and carnivores once found in the Midwest move and roar. Not-to-be-missed: the giant Brachiosaurus, whose remains were found in Colorado in 1900, the Tyrannosaurus Rex, discovered in 1900 in Wyoming, and the Alamosaurus, 90 feet long and one of the largest animatronic dinosaurs ever made!

At a campsite, find miniature dinosaurs — Compsognathus — scavenging through a tent. Don’t be fooled by the chicken-sized creatures; they’re carnivorous and may look at you as a meal.

Recently discovered dinosaurs also call Field Station home. The Dracorex Hogwartsia — named in honor of Hogwarts — was discovered in 2004 by amateur paleontologists in South Dakota. Scientists dubbed the dinosaur “Harry Potteresque” because it resembles a mythical dragon. The Dracorex Hogwartsia was a two-legged herbivore believed to have lived in the area 66 million years ago.

The Anzu is an 11-foot-tall, birdlike, two-legged creature that was found 12 years ago in Montana, South Dakota and Wyoming. Named for a mythological demon, the omnivore’s nickname is “Chicken From Hell.”

Additional dinosaurs include Triceratops, Pteranodon and Stegosaurus, as well as lesser-known species such as Niobrarasaurus, Alamosaurus and Appalachiosaurus.

More than 30 shows and activities help tell the story and science of dinosaurs, and most are included with a daily pass.

Hit the brand new Paleo Playground — it opened April 27— where kids can let off steam and literally bounce off the walls in an Indiana Jones-inspired obstacle course.

Sing along with the Dinosaur Troubadour, play 18 holes of Jurassic Golf, and search for “bones” in a fossil dig. Don’t miss the Dinosaur Dance Party and the T. Rex Feeding Frenzy in the amphitheater. For an added fee, there’s the Paleontologists’ Laboratory for hands-on learning.

The Kansas Climb takes the whole family four stories high for an aerial adventure in what’s being billed as “America’s only ropes challenge course in a geodesic dome.”

Who’ll enjoy this park most? Four-year-olds who love dinosaurs; older kids who dig natural history and science. And anyone who gets a kick out of quirky roadside attractions. This one towers over most!

ANOTHER TREK THROUGH TIME

While you’re in the area, check out the Museum of World Treasures in Wichita’s Old Town entertainment district. The all-ages attraction features dinosaurs, Ancient Egyptians and shrunken heads, plus a World War II collection (how’s that for eclectic?).

— Chris Christen contributed to this report

See wild horses and prairie dog towns and experience prehistoric thrills as you traverse the Midwest.

Jeep safaris, horseback rides and other paths to close encounters with wildlife in Nebraska

Spotting chipmunks in Colorado can be a thrill if you're 5 years old. But if you're a fourth-grader, you're probably hoping to spot something 10 times more exciting than a cousin to a tree squirrel.

There are lots of cool animals to see in Iowa.

You can find lions and tigers and bison – oh my! – in Missouri

You know about the Budweiser Clydesdales — but what about Missouri’s exotic cats and rocks that look like elephants!

Save the dates: Fill your calendar with festival fun

With all the amazing activities, they add a whole new layer of excitement to your visit.

Fossil freeway: A road back to millions of years ago

Saber-toothed cats and mammoths flourished along the banks of the plentiful streams and rivers that crisscross northwest Nebraska.

Fossils in Nebraska: A 12-million-year-old tale that never grows old

At some dig sites, you can even go on guided fossil hunts.

When wild horses and beautiful scenery meet, it's hard to leave

The Black Hills Wild Horse Sanctuary is a place where people can see natural history, beautiful landscape and the way America was 300 years ago.

Replica of 'Scotty,' the largest T. rex ever discovered, is coming to Omaha's Durham Museum

Next week, the Durham Museum opens its newest exhibit "Tyrannosaurs: Meet the Family," which explores the unique Tyrannosaur characteristics and outlines the dinosaurs' newly-revised family tree.

An Arkansaurus at Field Station: Dinosaurs.

An Edmontosaurus at Field Station: Dinosaurs. In addition, its fossils can be found at the Museum of World Treasures in Wichita.

A Parasaurolophus hangs out near a watering hole at Field Station: Dinosaurs in Derby, Kansas.

The Anzu was discovered in the early 2000s in South Dakota, Montana and Wyoming. 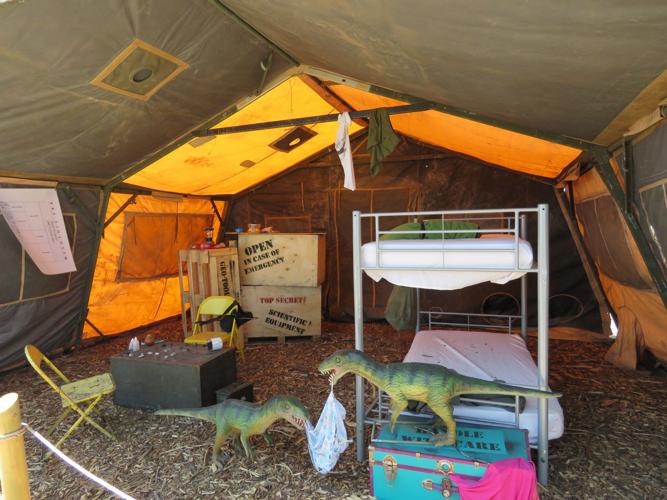 Miniature dinosaurs scavenge through a tent at Field Station: Dinosaurs.

Visitors can challenge themselves on an obstacle course at the dinosaur park.