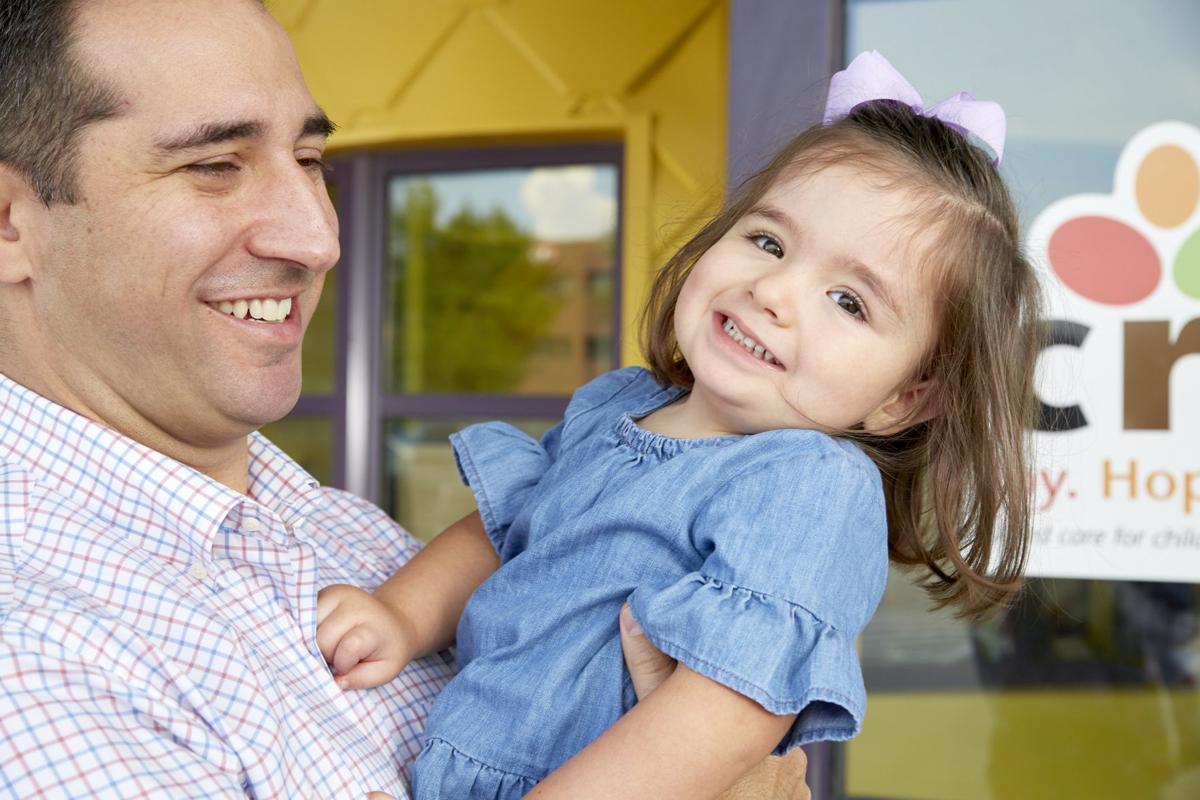 Two-year-old Giulia DiGiacomo, daughter of Dominic DiGiacomo and Dr. Megan Belfiore, has Wieacker-Wolff syndrome, a rare genetic disorder that presents a range of mobility challenges. She is one of only 56 diagnosed cases in the world, DiGiacomo says. The toddler is pictured with her dad at CRCC, formerly Children's Respite Care Center, where she goes two days a week. 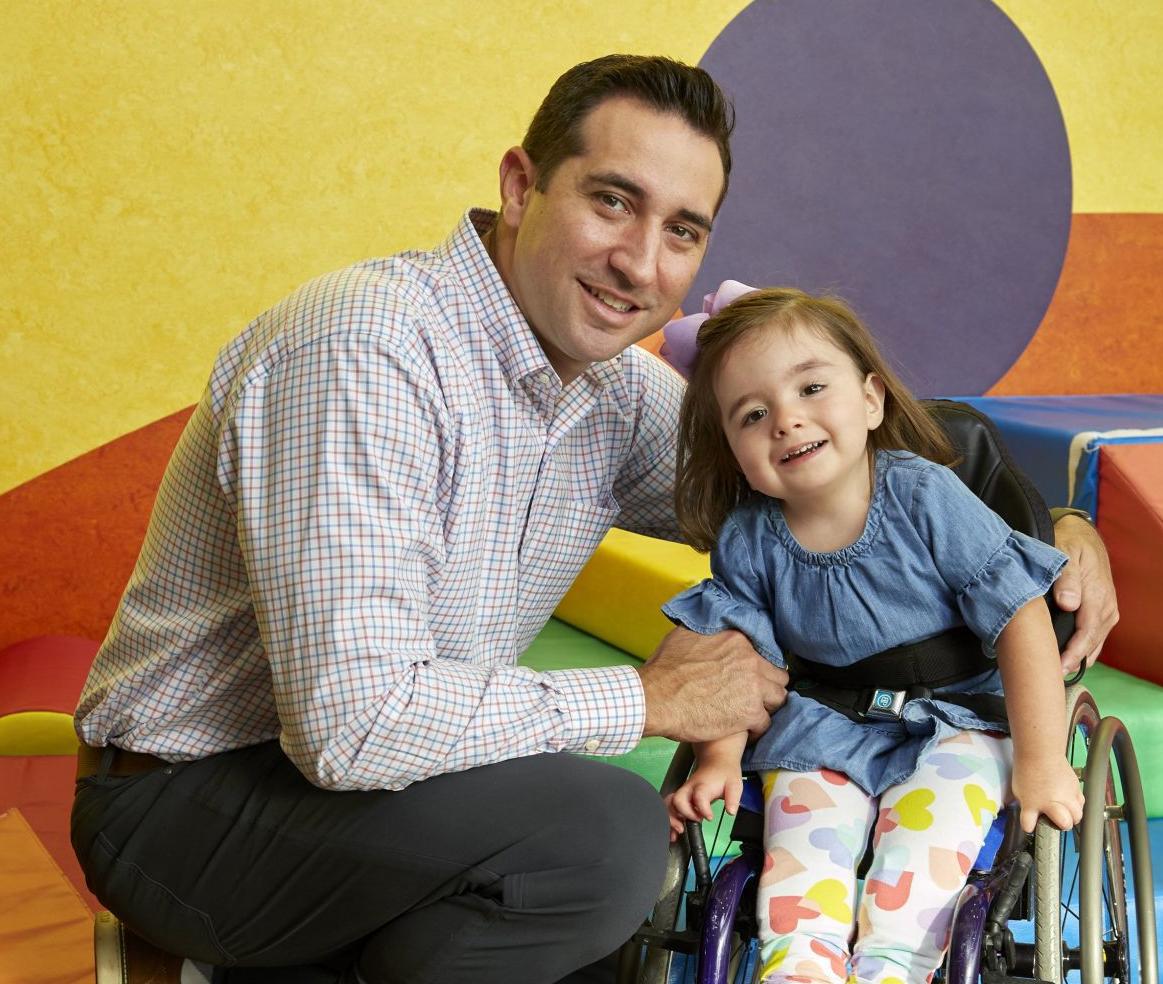 Giulia and Dad, at CRCC. The toddler will turn 3 in December.

Two-year-old Giulia DiGiacomo loves being around her two big sisters and playing in the front yard, but right now, she’s all about “Baby,” her aptly named baby doll.

Intrigued by a nearby high chair, Giulia loosens her grip, helps settle Baby in, and sets out a multicolored buffet of rubber balls. Moments later, the toddler is off.

“She is constantly on the move in her chair,” says Dominic DiGiacomo, Giulia’s father.

Giulia – or “Giules” to her family – was born with Wieacker-Wolff syndrome, an extremely rare genetic disorder that carries a range of potential challenges: delayed motor development, skeletal abnormalities, including hip dislocation, and delayed speech.

“She is one of only 56 diagnosed cases in the entire world,” DiGiacomo says.

He and his wife, Dr. Megan Belfiore, learned something was amiss 18 weeks into the pregnancy.

“When she was in my belly, she didn’t move well. She had a lot of fixed, contracted joints,” Belfiore says.

“We went back-and-forth with having someone in the home, but I liked the checks and balances of a bigger place,” Belfiore says. “It was good knowing they had nursing care – that was a huge drive.”

Celebrating 30 years of impact in 2020, CRCC provides skilled care; physical, occupational, speech, feeding and behavioral therapies; weekend family respite; a rich educational environment for children ages preschool to 21; and an array of resources for families of children with special needs.

Most recently, CRCC opened an innovative, integrative peer preschool program, “so that children with special needs and typically developing children have the opportunity to influence one another and learn together,” says Sarah Tselentis, CRCC’s director of development.

Supported, in part, by grant funding from Blue Cross and Blue Shield of Nebraska, CRCC currently serves some 400 children and young adults at its northwest and southwest centers.

“From the second Giules comes in, the staff is always so kind and excited to see her – and they’re like that with all of the children,” DiGiacomo says.

Giulia does physical therapy at the southwest center on Tuesdays and Thursdays and then spends the rest of the day there. That has allowed Belfiore, a veterinarian, to reap the mental and financial benefits of going back to work part time. The family also takes advantage of CRCC respite care on occasion.

“The respite care is a huge thing,” Belfiore says. “With October coming up – and some Fridays when the kids don’t have school – we can drop off Giulia at CRCC and spend the day with the ‘big kids’ at Vala’s Pumpkin Patch.”

With Giulia turning 3 in December, her family celebrates every bit of progress. She no longer needs the feeding tube, and she’s making strides using her arms and legs.

“When she started rolling independently, it was like Christmas for us,” Belfiore says.

As Giulia returns to focus on Baby, Mom and Dad set their sights on the future. Their hopes for their youngest mirror their hopes for her sisters: “That she is happy, as independent as possible and feels like she’s a valued part of society.”

“Faces of Fearless” is a storytelling series from Blue Cross and Blue Shield of Nebraska, celebrating people living their very best lives and inspiring others to do the same. Read more stories like this at Omaha.com

An aspiring chef finds a door into the kitchen, excels in 15-week culinary training program

Working experience with No More Empty Pots is "fearless" stepping stone to fulfilling a dream.

“I either had to get busy living or get busy dying.” Today, he's managing his disease without insulin or medication.

Richard Webb was either going to be constructive or destructive. He made the right choice.

Project Houseworks' volunteers save the day, and possibly a life

Grateful homeowner, 85, credits the nonprofit for improving the quality of her live and home.

Nonprofit's pantries will switch to drive-thru service to keep necessities accessible to families.

Two-year-old Giulia DiGiacomo, daughter of Dominic DiGiacomo and Dr. Megan Belfiore, has Wieacker-Wolff syndrome, a rare genetic disorder that presents a range of mobility challenges. She is one of only 56 diagnosed cases in the world, DiGiacomo says. The toddler is pictured with her dad at CRCC, formerly Children's Respite Care Center, where she goes two days a week. 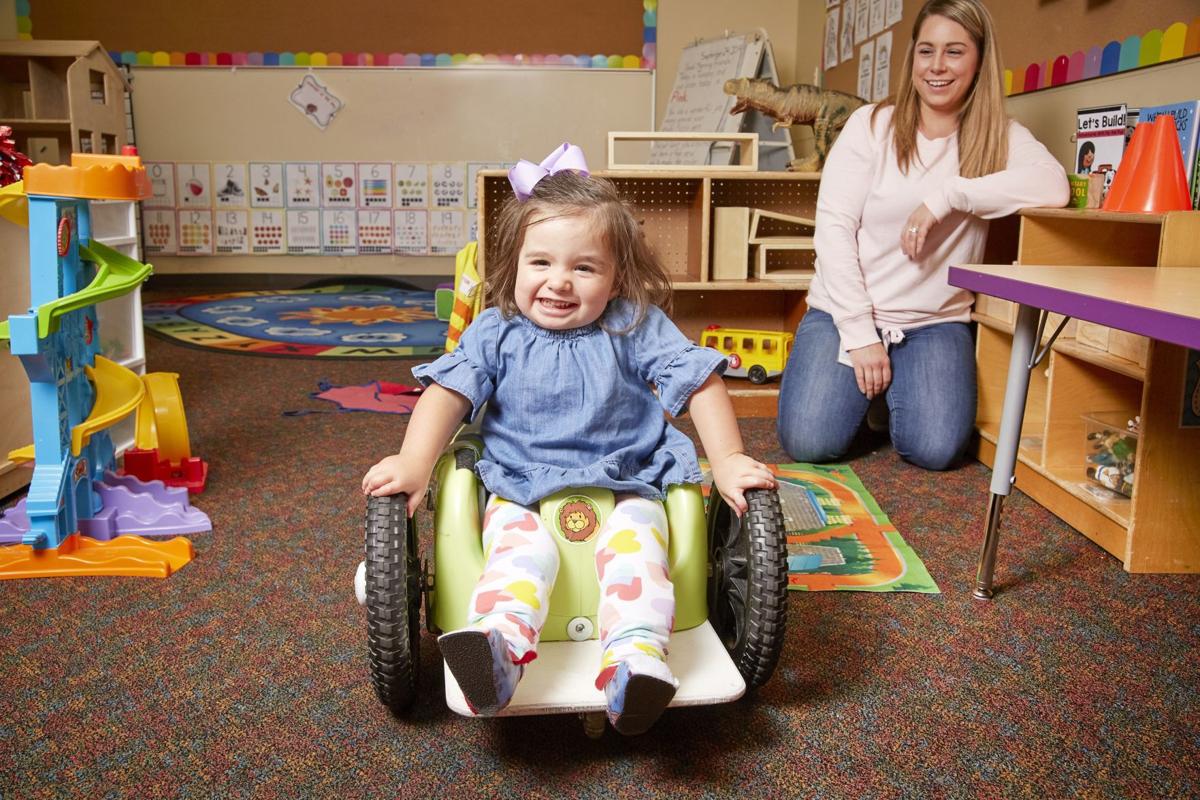 Two-year-old Giulia DiGiacomo does physical therapy two days a week a CRCC, which is supported, in part, by grant funding from Blue Cross and Blue Shield of Nebraska. 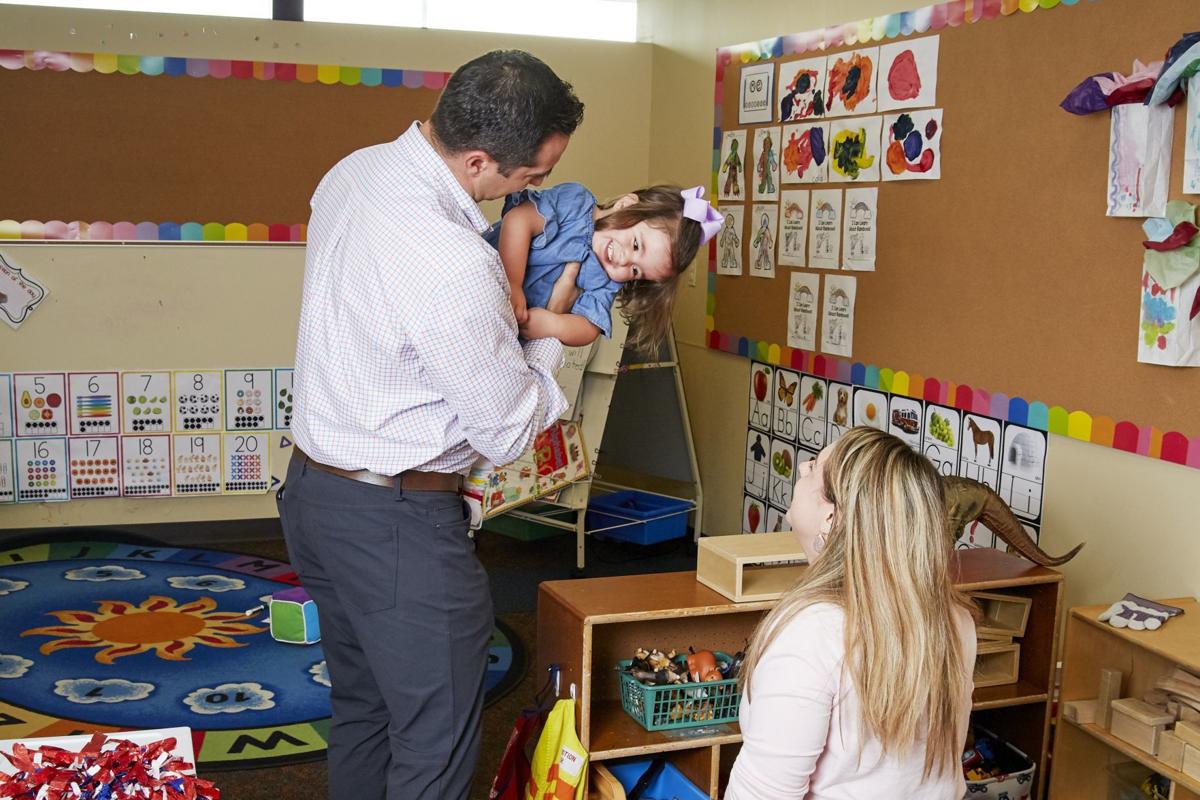 Dominic DiGiacomo and his wife, Dr. Megan Belfiore, speak highly of the care daughter Giulia gets at CRCC, formerly Children's Respite Care Center. They especially like how special needs children and typically developing children play and learn together.

Giulia and Dad, at CRCC. The toddler will turn 3 in December.