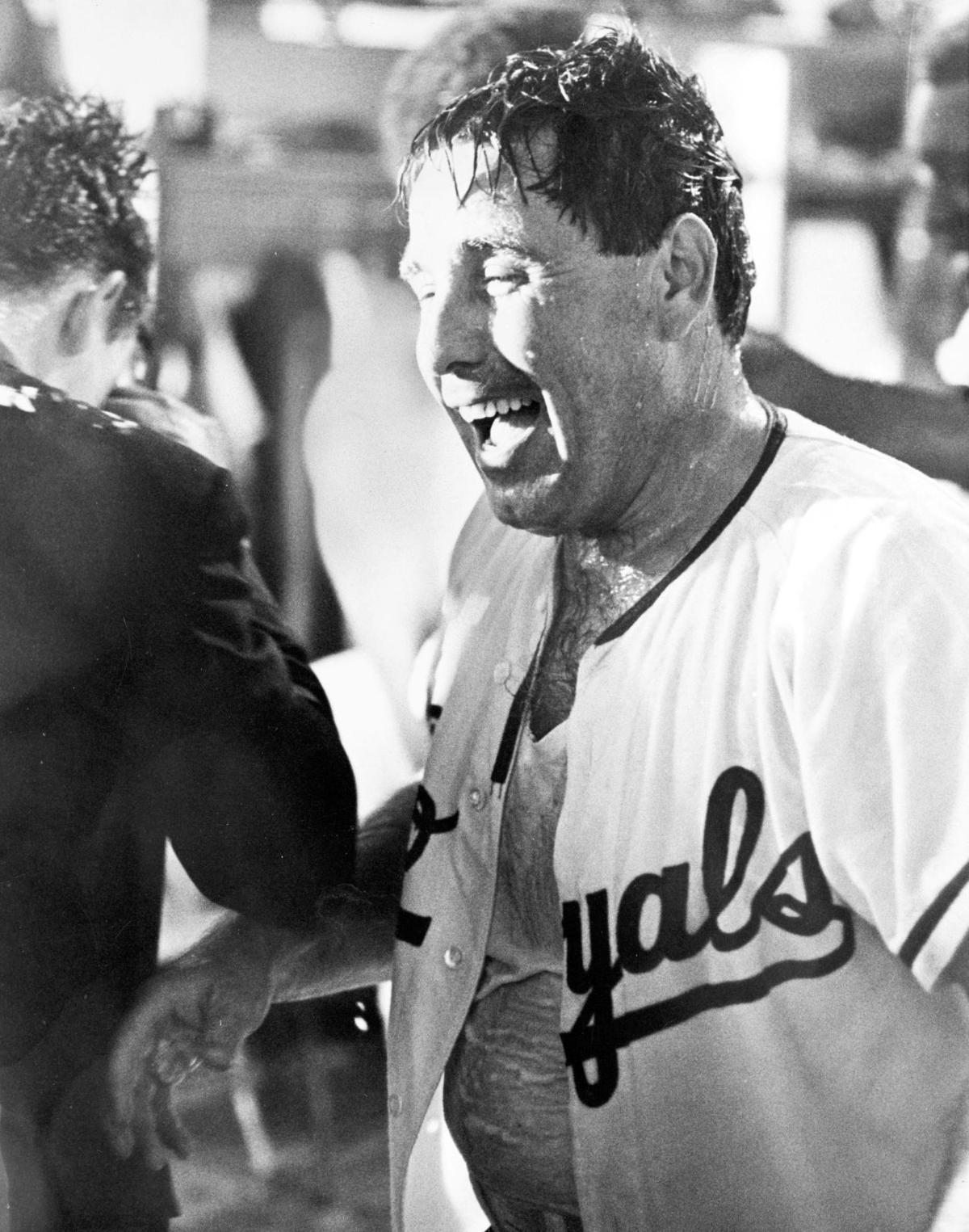 Pictured is Jack McKeon, the first manager of the Omaha Royals. 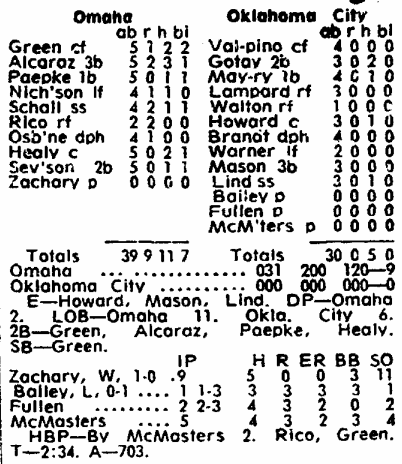 The Omaha Royals — now Storm Chasers — rolled to a 9-0 victory over Oklahoma City in the franchise's first game on April 18, 1969.

Below you can read the game recap by Robert Williams in the April 19, 1969, edition of The World-Herald.

The 25-year-old right-hander, who has pitched more in All-Sports Stadium than anyone else, hurled a five-hitter and won, 9-0, behind an 11-hit attack.

The former Oklahoma City 89ers, who was sold to Omaha after last season, breezed to victory after being staked to a three-run lead in the second inning.

His performance added to the discomfort of the 89er management which counted 703 fans on a 49-degree night.

Omaha, back in baseball for the first time since 1962, will try for its second triumph tonight.

Paul Spittorff, a former Morningside College pitcher, will hurl for Omaha against Ron Cook, who had a 1-6 record for Oklahoma City lats year.

Omaha will bring American Association baseball back to Rosenblatt Stadium in a 7:30 game Monday night with Tulsa.

Zachary, making a comeback after being limited to eight games last year because of ailing fingertips, had trouble with wildness in the first inning. He issued two of his three walks in that inning.

He settled down to retire eight in arrow, and refused to allow more than one hit in any inning. Zachary fanned 11.

He pitched four season for Oklahoma City and shared the Pacific Coast league high for wins in a 7-8 season in 1965.

A key blow for Omaha was Lee Green’s bases-loaded double that drove in the last two of three runs in the second inning.

Steve Bailey, who absorbed the loss, walked the bases full in the second.

With one out, Green singled off pitcher Tom Pullen’s glove. Green stole second before the double by Paepke, a 23-year-old first baseman up from El Paso.

Catcher Fran Healy, accounting for a fourth Royal double, drove home the seventh run in the seventh. Healy lined to right center to score Fred Rico, who was hit by a pitch.

Paul Schall’s single and an error sent two runs over the plate in the eighth.

Lloyd Waner, the Hall of Famer who lives in Oklahoma City, threw out the first pitch marking the revival of American Association baseball here.

Seven years ago, the same clubs met here on opening night of the last previous Association season. A crowd of 10,102 attended that game, the first played in All-Stars Stadium.

Opposing Manager Jack McKeon of Omaha and Cot Deal introduced their squads before the game.

Designated pinch-hitters on the rival clubs had differing pregame views on the new rule. And both went hitless.

“It will save wear and tear on guys like me,” said Osborne, who has returned to the playing ranks after managing in the minors last year. “You don’t have to worry about running into the stand for foul flies (he is a first baseman by trade).

Jack Brandt, an off-season Omahan and the 89ers specialty hitter Friday night, doesn’t like the rule for the same reason—because it prevents him from playing on defense.

Osborne walked and scored in the three-run Omaha second inning. He was retired in four other trips, twice on strikes. Brandt struck out three times and grounded out to the pitcher.

Check out some of The World-Herald's best photos of the Omaha Storm Chasers.

With its PCL slate set to begin Thursday, Omaha announced its initial roster for its 50th season.

The World-Herald's Gene Schinzel compiled the Midlanders in the Majors and took a look at former local standouts that could be making their MLB debuts this season.

No one involved with Monday's scheduled exhibition between Omaha and Kansas City at Werner Park wanted to pull the plug on the game. But, in the end, it was the right thing to do.

The end of the era and a dawn of another. The Omaha Royals — now Storm Chasers — ended a stretch without minor league baseball in Omaha and began a 50-year run as Kansas City's affiliate.

It’s been so long since the Kansas City Royals last visited their top affiliate in Omaha for an exhibition game that none of the players who will suit up Monday has participated in one.

From the archives: Omaha Storm Chasers officially bring Triple-A baseball back to Omaha

With an absence dating back to 1962, the Omaha Royals officially brought Triple-A baseball back to Omaha in their home opener on April 21, 1969.

Omaha will be turning back the clock during its 50th season to honor teams of its past. Some of its more recent ones have been its most successful. The Triple-A franchise opened its Storm Chasers era at Werner Park by winning three PCL titles and two national championships in four years.

Shatel: From Rosenblatt to Buffett to Brett, 50-year run with Kansas City proved beneficial for Omaha

The story of the incredible, long-shot Omaha Royals-Chasers lives in our short-sleeved memories. But it’s also in some of the treasures that Martie Cordaro dug up over the past few years.

Jonathan Dziedzic returns to form on the mound, but Chasers drop pair to SkySox in season opener

In the first month of the 2017 season, no pitcher in the PCL was better than Jonathan Dziedzic. The Omaha left-hander made five starts in April, posting a 3-1 record and a stellar 0.94 earned-run average.

Chasers earn doubleheader split against Colorado Springs, but biggest win is playing at all

Omaha and Colorado Springs split a pair of one-run games in their second doubleheader in three days. But the real winner was the Werner Park grounds crew, who turned a snowy, icy field into a playable one.

The weather just won't stop, will it?

One big inning was all the Memphis Redbirds needed in a 7-0 shutout of the Omaha Storm Chasers on Tuesday night. The Redbirds scored seven runs in the second inning off Chasers starter Heath Fillmyer, who was making his debut at the Triple-A level.

Early-season struggles continue for Storm Chasers, who fall to 1-6 after fourth straight loss

A ninth-inning rally wasn't enough as the Omaha Storm Chasers lost their fourth straight, 5-4 at Memphis on Thursday night.

Rain suspended Omaha’s game against Nashville in the fourth inning Saturday, with the Sounds leading the Storm Chasers 6-2.

50 years ago, Bob Gibson set a World Series record and wrote about it in The World-Herald

It was this date, Oct. 2, in 1968. Game 1 of the World Series. Bob Gibson set a World Series record with 17 strikeouts. Then the Omaha native wrote about the experience in The World-Herald.

Babe Ruth was cooler than Gatsby, more famous than Houdini. He had just hit 60 home runs. When he barnstormed the country in the fall of 1927, strangers lavished him with gifts: gold watches and diamond pins and bronze plaques. But an egg? Only Omaha.

Pictured is Jack McKeon, the first manager of the Omaha Royals.

The World-Herald's headline for the Omaha Royals' first game recap.