It was Tuesday. Football Tuesday. And then it wasn’t.

I was getting ready to drive to Lincoln for the weekly Nebraska football press conference.

The Huskers were coming off a big win over Notre Dame at home. Rice was on deck. All was well.

Then I turned on the TV to check the weather. And I saw thick black smoke coming out of a New York City building.

The anchors on the “Today” show speculated that it had been an accident, a plane had gone horribly off course.

Then the information and news streamed in. And then the image of another plane, coming toward the Twin Towers.

As the events of Sept. 11, 2001, unfolded, I was scared to death. Vulnerable. Things were happening in Washington.

Where else? What other cities? Omaha?

I drove to Lincoln anyway. I had to get away and on the open road. When I got to NU’s campus, it was quiet. Empty. Eerie.

The entire day was that way. In Omaha, it felt like a state of emergency. Gas stations had long lines, cars all the way out into the streets.

Anger. Fear. Anxiety. We were engulfed by all of those things.

Eventually, the streets and bars and restaurants were empty. People stayed home, glued to their TV.

There were no sports. No football. Nobody minded.

But eventually, there would be football.

At UNO, on the Saturday after 9/11, one of the first sporting events in the country. The Mavericks hosted South Dakota State.

Then the next Thursday night, the rescheduled Nebraska-Rice game at Memorial Stadium.

Twenty years later, the 20th anniversary of 9/11 falls on a Saturday. A football Saturday.

Nebraska's 9/11 Tunnel Walk tribute to be featured in documentary

And I still find myself wondering.

How did we play football so soon? Was it the right thing? Did it help?

The crowd that day was announced at over 7,000. That was a good crowd for UNO. Obviously, people wanted to get out. They wanted to be there.

But did that mean this was the right thing? UNO officials had no way of knowing. It was four days after the attacks. The country was still in shock.

The game was one of a handful of sporting events that weekend.

And as I recall, and wrote, it felt appropriate.

On that day I found David Quinn, then assistant hockey coach at UNO. Quinn had lost a good friend, an L.A. Kings scout, in one of the plane crashes.

He would go back to Boston to bury his friend. But first he needed a football game.

“I don’t think there’s a right or wrong here,” Quinn said that day. “To me, this is a diversion. There’s only so much TV I can watch, so much news I need to see.

The atmosphere was anything but unpatriotic. Fans brought little American flags to wave. They wore flag pins.

And as the band led the way, the entire crowd sang the national anthem. With gusto.

“During the national anthem, my hand was shaking (over his heart),” UNO coach Pat Behrns said. “I could only wonder: How do those kids feel?”

Mav quarterback Seth Turman said, “I had mixed emotions about playing this game. All week all we’ve been doing is watching TV, worrying, wondering.

“It was just time to get back out, get back to normal, back to what we do. I’m happy now we did it. It was good for us. Good for the fans, too.”

A capacity crowd of 77,000 was on hand. They sang “God Bless America” and “The Star Spangled Banner” together.

It was a goose-bump moment. The teams were on the sidelines. No Tunnel Walk tonight.

The Tunnel Walk music played over the speakers. And then the customary video played, from the cornfields to Chimney Rock to the Doorly Zoo to the state capitol sower raising the roof.

The gates opened. And there they were.

A trio of Army ROTC officers, carrying the flag. Behind them, five officers: one each from the Lincoln Fire Department, Lincoln Police, UNL Police, Nebraska State Patrol and Lancaster County Sheriff’s Office.

When they came to the opening and popped out into the stadium, you heard the largest roar the stadium has ever heard.

There were shivers. And tears.

The game that night was insignificant. All people could talk about — whether they were there or not — was the greatest Tunnel Walk they had ever seen.

And how they stood, side by side, and sang and cheered their flag and country in a stadium named for those who lost their lives in World War I.

Football brought those people together. It got them out of their houses, away from the TV shows, and gave them a moment where they could share the pride in their country.

The games would return. Life would go on. But it would never be normal. There was no more normal after that unforgettable day.

Twenty years later, we’re in the midst of celebrating the return of football crowds from a pandemic year. The games, like the people, endure.

But the games are not meant to be right or wrong. They’re meant as entertainment, escapism. In that sense, they worked back in 2001. As they do now.

As I look back at those football games after 9/11, I don’t think about the football. I can’t recall a play.

What I can still see and hear are the sights and voices of patriotism. I can still feel the strength of a country.

To quote the UNO quarterback, “It was kind of neat.”

» Tom's Takes: In pursuit of bowl game, Huskers' schedule is full of marquee games — including Buffalo

» Shatel: Nebraska's win over Fordham is a confidence booster for the Huskers

Nebraska’s offense may have to shuffle a bit at wide receiver today, as neither Oliver Martin nor Omar Manning appear to be playing. Here are more pregame observations ahead of kickoff.

Tom Shatel was with Johnny Rodgers the first time he saw the broadcast footage of his famous punt return. Tom recalls that memory and many other "goosebump moments" from the Game of the Century.

Mahomes and Hurts to make history at Super Bowl LVII

Mahomes and Hurts to make history at Super Bowl LVII 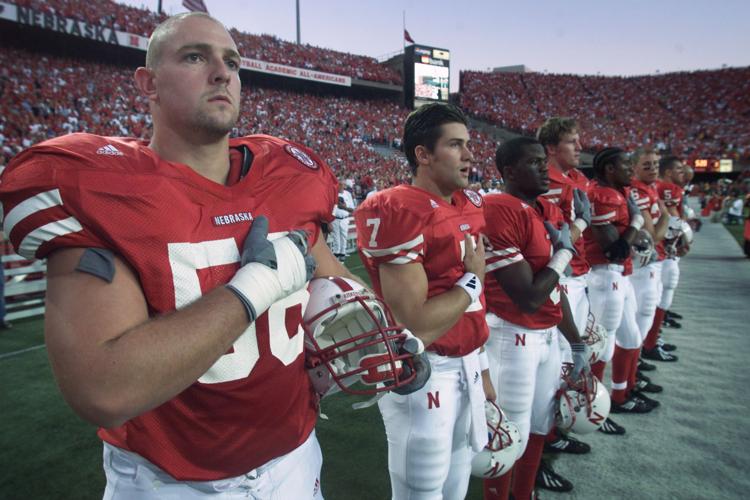 Dave Volk and Eric Crouch with the rest of the Nebraska team during the national anthem before the Huskers faced Rice in NU's first football game after September 11, 2001. 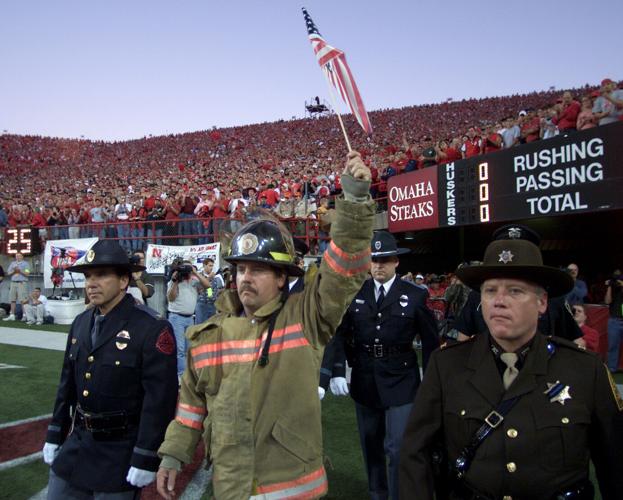 The Tunnel Walk music played over the speakers. And then the customary video played, from the cornfields to Chimney Rock to the Doorly Zoo to the state capitol sower raising the roof. The gates opened. And there they were, writes Tom Shatel. A trio of Army ROTC officers, carrying the flag. Behind them, five officers: one each from the Lincoln Fire Department, Lincoln Police, UNL Police, Nebraska State Patrol and Lancaster County Sheriff’s Office. 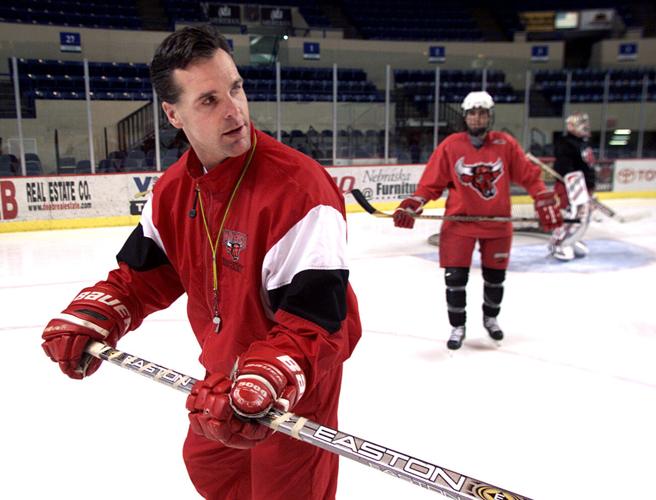 David Quinn, then assistant hockey coach at UNO, lost a good friend, an L.A. Kings scout, in one of the 9/11 plane crashes. Before he returned to Boston to bury his friend, he told Tom Shatel that he needed UNO football. 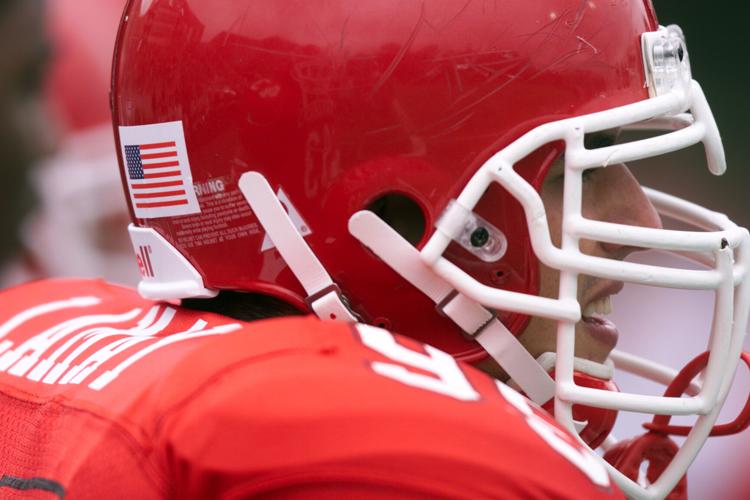 Tom Lamay and the entire UNO football team wore American flags on their helmets during the Mavs' game against South Dakota State on the Thursday after 9/11. 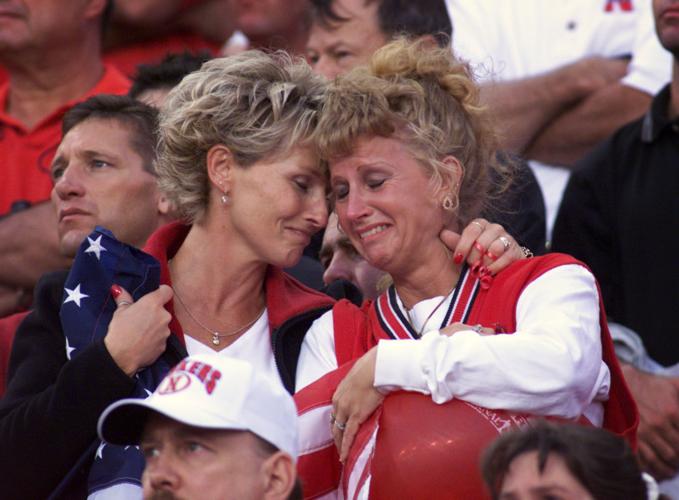 Denise Havlovic and Denise Robeson both of Brainard, Neb., embrace after the national anthem at the Huskers' game against Rice.