Diego Dominguez and Jack Marasco joked that they aren’t the smartest guys in the ballpark. But they might be the most informed.

Few others at the College World Series knew, for example, that Notre Dame starting pitcher Liam Simon has thrown a fastball 71% of the time this season and the average velocity of his heater is 95 mph. No one learned quicker that the distance of the left-field fifth-inning home run by Texas A&M’s Trevor Werner was 394 feet with a launch angle of 20.08 degrees. They know the right-field videoboard is running 1 to 2 mph below a pitch’s actual speed.

On this steamy Tuesday afternoon, the Creighton juniors-to-be are an unofficial center of knowledge, with others in their informational orbit.

Their setup is modest — each sits with two open laptops at the far right side of a fourth-floor room also housing half a dozen CWS officials. One inputs the details of every pitch into a program that will be used by the NCAA. The other chronicles details of each offering into an Excel spreadsheet as a backup.

A CWS social-media person walks over to collect information from them after home runs to post on Twitter. Writers and radio announcers often ask for details on certain pitches.

It’s also a place that a bunch of business majors and math gurus never thought they’d be part of.

They wear polos bearing their group name — the Creighton Baseball Analytics Team. It began in 2019 as a word-of-mouth, student-run club of sorts, attracting anyone drawn to numbers and America’s pastime. Now the squad is at the controls of the Trackman technology sharing various metrics at the CWS for the first time.

The CBAT has 16 members but had to take an emergency swing at this June opportunity when the NCAA last week confirmed it would use individuals from the host school who were already familiar with the software. The CU student who put together the group’s CWS schedule, Rourke Jensen, did so from his internship in Washington, D.C. Eight others scrambled to downtown Omaha to serve in two-man shifts recording and entering data.

Dominguez jumped at the chance, taking a few days away from his internship with a summer collegiate prospect team in Illinois. Marasco did the same with his finance internship in Kansas City, crashing at a nearby house he already leased for fall semester.

The evening crew came from their day jobs — seniors Trevor Ordway as a Gallup intern and Pete Rudnick with a summer position at Nebraska Medicine.

“We’ll do anything to be at this level,” said Dominguez, noting the job is unpaid. “It’s definitely a unique experience.”

Underclassman Caleb Hauser, from Milwaukee, crashed on Dominguez’s couch one night. Cam Kresko (a business major from Minnesota) and Aidan Herguth (a finance major from Chicago) made it back, too. Ryan Wolak — who co-founded CBAT alongside former Creighton pitching coach Eric Wordekemper — filled in for four weekend games.

Wolak, now graduated and a data and reporting analyst for Conagra, can hardly believe the group has gone so quickly from endeavoring to help Creighton baseball to tracking data for the NCAA on the sport’s biggest college stage.

This was the dream, to be a pipeline for students who want to work in sports. The CWS didn’t track analytics even last summer, though the park has been equipped with the technology for years.

The work itself has been thrilling, too.

The homer distance record at this CWS so far is 416 feet, coming from Mississippi slugger Tim Elko on Monday and Arkansas outfielder Chris Lanzilli on Tuesday. Razorback reliever Jaxon Wiggins is the only one so far to touch 100 mph with a pitch. Exit velocities in excess of 112 mph are a reminder that this isn’t the Big East.

“That number is insane,” Marasco said. “I haven’t seen one like that.”

Oklahoma pitcher Cade Horton threw a six-inning gem Sunday in a win over Notre Dame, but the Creighton reps noticed the vertical and horizontal movement on Horton’s slider were flattening out late. Sure enough, the righty allowed a two-run homer in his final frame.

Metrics indicated a similar trend Monday for Arkansas’ Wiggins, who allowed four runs in 1.1 frames. If coaches in the dugout were allowed to see such things during a game, their decisions might be much different.

“Trackman doesn’t lie,” Dominguez said. “He didn’t necessarily have the movement and you saw it on the field, too.”

Added Marasco: “We kind of predicted he was going to get hit even though he was throwing 100.”

The hardest part of the job, the guys agree, might be correctly identifying pitch types.

A player’s pitch usage history helps. So does rotations per minute (RPM) — a lower number around 1,400 suggests a change-up while one in the mid-2000s indicates a slider. Another clue is tilt, describing the direction of the ball’s spin like with a clock. A fastball, for example, spins in the 1 o’clock range for right-handers while sliders are closer to 8 o’clock.

All the information is accessible to teams after the game. CWS umpires this week began reviewing the reports to see how they graded out calling balls and strikes.

Creighton’s squad is happy to share. And — in a few cases — help set the big boys like ESPN straight if they notice an error. The students still shake their head at how absurd it sounds.

“We don’t know how to tell them that,” Marasco said. “I don’t know what ESPN uses, but it's not our stuff. We’re just a bunch of guys who want to be involved with the game.”

A first-pitch leadoff double, a RBI single just after that, followed by an evening of smacking baseballs into the corner of left field. Arkansas did all that — and then some — in routing Auburn.

Nathan Dettmer and Joseph Menefee pitched Texas A&M to a place it has never been before at the College World Series: the national semifinals.

When former Nebraska administrator Butch Hug organizes baseballs at the College World Series, there's only one way to work. “The Nebraska Way,” he says. The right way. On the first try.

Long before Tim Hudson’s 17-year MLB career, the right-hander was a rising star at Auburn. His final college start? A win over Rice in the 1997 CWS. Now he's back in Omaha with the Tigers. As their pitching coach.

The secret to postcard perfection at The Road to Omaha statue

College World Series ambassadors often take photos for fans at The Road to Omaha statue. One of them has a secret for the perfect CWS postcard. 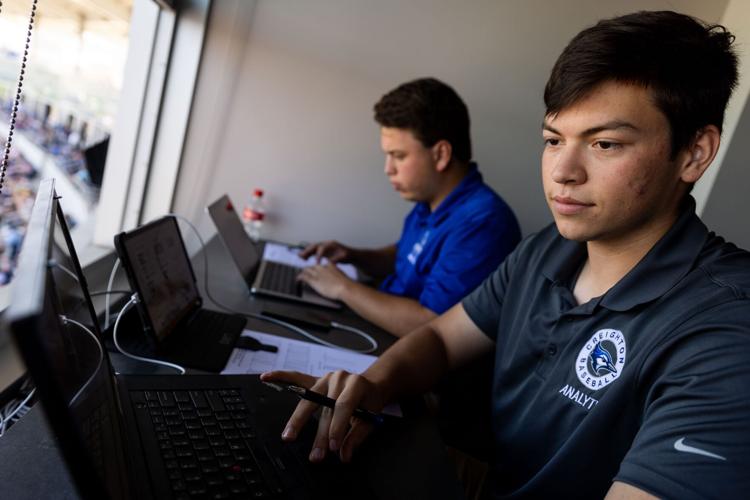 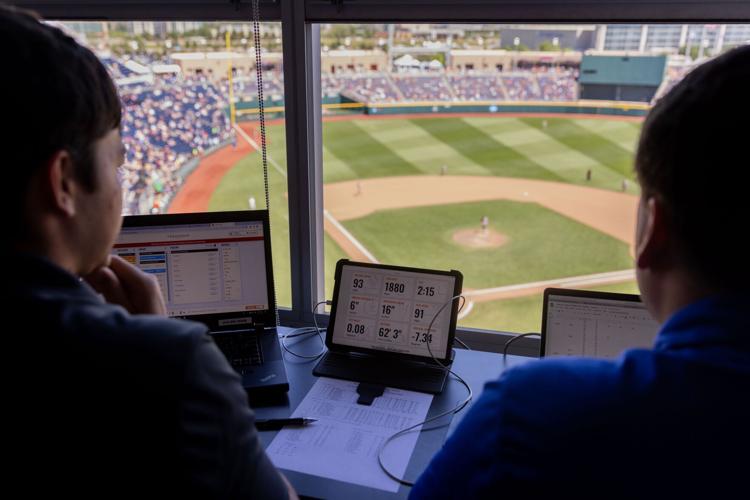 Diego Dominguez, left, and Jack Marasco, both Creighton University juniors, are part of the analytics team for the College World Series.