The heart of the College World Series is alive and well. And on a hot double-decker Cajun grill.

Back in the day, this would be Row J at Rosenblatt Stadium and some guy in a gold jersey and purple hat would be offering up a cup of jambalaya or boudin or bacon-wrapped shrimp.

Then you would be given a “Row J” button to wear, a badge of honor that made you an official member of the Brotherhood of CWS Tailgaters.

But now it’s 2022, and Paul Maloney hands me a business card. It reads:

We Are An Equal Opportunity Tailgate.

Hotty toddy, and how.

Paul and Traci Maloney, the King and Queen of Lot D, have rolled out the maroon carpet for all CWS fans in Lot D since 2011.

Their tailgate village is easily spotted — find the Mississippi State flags. Or just follow the scent of fresh Mississippi mallard.

The common thread tying 1996 and 2022 together: Everyone is welcome.

And we mean everyone.

Among the crowd gathered under the Maloneys’ tents at 11 a.m. on a CWS Saturday were fans wearing Arkansas, Texas A&M, Iowa State and Notre Dame shirts.

Such a sight would not be possible at Stark Vegas or the Grove in Oxford, Mississippi.

But Omaha has special healing powers. Always has, always will.

“We’ll let any school in,” Paul said. “This is the Camp David of baseball. We tell people, ‘Leave your animosity at home, come to Omaha and have a good time.’

“That’s exactly what Omaha is.”

It’s marked with a “Left Field Lounge Lizards” banner — right next to the green and gold banner that reads: “Welcome Catholics.”

Yes, all religions are welcome at the Lot D Tailgate.

The Ole Miss crowd arrived Friday. And the hot toddies fit right in.

“We fed ’em, we gave them beverages,” Paul said. “We were razzing each other all day.

“In 2014, (Ole Miss fans) came and they hadn’t been here in a long time. They weren’t sure what to do. We had them here. They were hanging out.

Inside the tent Saturday, JD Maloney — a relative from Minneapolis and Mississippi grad — wore an Ole Miss shirt. It made perfect sense.

“This is the Holy Land,” said Maloney, and it wasn’t clear if he meant Omaha or the Left Field Lounge North. Maybe both.

Paul and Traci were baptized in holy CWS waters in 2007.

That was the year of their first CWS. They came from Jackson, Mississippi, to follow the Bulldogs. They arrived on the Rosenblatt scene and had no clue where to go.

They ended up parking down the hill from the stadium, near a shade tree and next to the Gundersons from Gretna.

The Maloneys had a Styrofoam cooler. The Gundersons had the whole setup.

From Rosenblatt to Schwab Field, tailgating is a CWS tradition that continues to live on

And 15 years later, the Maloneys keep passing on that same spirit to old friends and new ones.

At the CWS, there are no strangers. Just friends you haven’t met yet.

Time moves on. Seasons change. The CWS changes, too.

Purple and gold are no longer the prevailing colors. There are some LSU fans, sure, but not like before, when the tailgate lots all had Cajun smoke whether the Tigers were here or not.

Now the colors change year to year, from Omahogs to Bulldogs to a striking splash of green and gold this year.

The tailgate smoke isn’t as strong. But it’s still there.

And there was some question about that in 2011, when the caravan came north down 13th Street.

The CWS at Rosenblatt was tailgate-driven. Would the presence of next-door eateries and pubs change that?

Pete Gunderson wondered about that. He has been going to CWS games since his parents brought him in the 1960s. Later he brought his kids.

It took a couple of years, but tailgates in Lot D and Lot B started popping up. One of the first to lead the way: the Maloney-Gunderson collaboration.

“I was very worried about how the atmosphere would change,” Gunderson said. “If you remember the last couple years at Rosenblatt, it almost got out of control. Security was clamping down and rightfully so.

“When we came down here, it was more relaxed. Like Rosenblatt was 10 years before it closed.”

Before they knew it, the Mississippi “Wild Mallard” was on the grill, covered in jalapeño cream cheese and wrapped in bacon.

And soon, the Maloneys would be invited to Ole Miss football tailgates — 12 of them — by the same fans they hosted in Omaha.

Meanwhile, Gunderson found himself going to MSU baseball games in Starkville and visiting the Maloneys in Jackson.

“They came up here for my daughter’s graduation,” Gunderson said. “They’ve become family.”

Union Omaha is looking for its third straight MLS victim. Some have compared it to a Double-A baseball team beating a major league team. 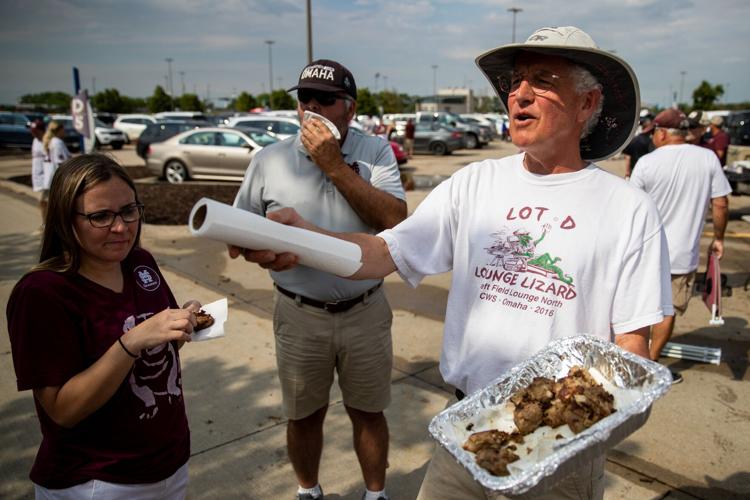 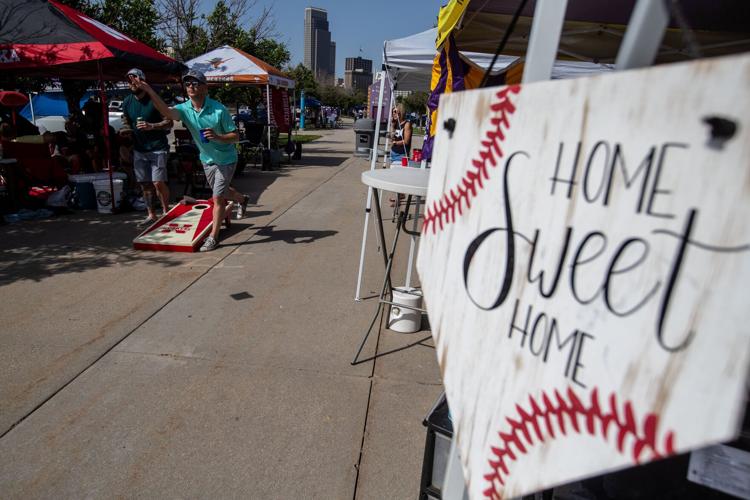 Jay McArdle makes a throw while playing corn hole with Jason London during tailgating before the College World Series.