Creighton coach Greg McDermott, watching the past two CU games from his couch, couldn’t share his on-the-spot observations by suddenly calling out to his players or by quickly pulling one of his assistants to the side.

So he wrote everything down.

All his thoughts about tactics, shot selection, tendencies and personnel. The most pertinent notes got texted at halftime to a graduate assistant. The fun stuff went to his Twitter profile, where McDermott added some levity by celebrating the games’ high points with exclamation points, hashtags and jokes about refs.

He tried to make the most of it. But he’d much prefer the sidelines.

“I didn’t enjoy it that much, no,” McDermott said Thursday. “It’s no fun being away.”

McDermott returned to the Creighton team for practice Thursday, out of COVID protocols for the first time since he began his isolation after testing positive Friday. He said he feels good. Just mild symptoms initially. Then a bunch of boredom, McDermott said.

He watched film of every practice he missed and had a hand in the game-planning process. There were countless calls and texts with assistant Alan Huss, the acting head coach with McDermott out.

Altogether, McDermott missed two games — the 60-47 win over DePaul last Saturday and the 72-55 loss at Butler on Wednesday. He complimented the staff for its work to get the Jays ready to play. No issues there.

Perhaps what stood out to McDermott more than anything from afar were Creighton’s shooting woes. CU combined to go 5 of 39 (12.8%) on 3-pointers in the two games he missed.

It’s a concern, he said, just because you don’t want young players feeling self-conscious or apprehensive about their jump shots.

So a focus for the coaches, as the Jays practice ahead of Saturday’s home game against No. 21 Xavier, will be finding ways to bolster the team’s confidence, according to McDermott.

“We’ve got to do a better job of putting them in a position to maybe get something easy to try to get them going,” McDermott said. “Hopefully we can inject some confidence in them (Thursday and Friday) as we prep for a very difficult game against a Xavier team coming off two losses in a row.”

It was just two weeks ago that the Jays suffered an 80-73 defeat in a road game against the Musketeers (14-5, 4-4), who then beat DePaul before losing to Marquette and Providence. Xavier will be hungry, certainly.

But the Jays (12-6, 4-3) intend to play with urgency as well Saturday. They were disappointed with Wednesday’s result — their defense “was lacking in a lot of areas,” freshman Arthur Kaluma said.

Saturday’s game against Xavier is the first of three consecutive matchups that’ll be categorized as Quad 1 games by the NCAA selection committee. CU’s definitely ready to turn the page.

“It’s on to the next game,” Kaluma said Thursday.

Saturday will be Creighton’s 12th edition of its Pink Out game.

It’s the Jays’ annual attempt to bring awareness to the importance of regular cancer screenings and their chance to raise money for the American Cancer Society Hope Lodge in Omaha.

The players will wear pink jerseys that have been auctioned off to fans for the charity event. Additional donations can be made at cancer.org/omahapinkout — the David Spence Cancer Foundation announced it will match all donations up to $50,000.

“I’ll still get goosebumps when I walk through the tunnel Saturday afternoon because it’s an incredible event,” McDermott said. “It’s kind of become a can’t-miss game for a lot of people on our schedule.”

Creighton shakes off first-half scoring slump in win over DePaul

Creighton men's basketball shook off a lengthy first-half scoring slump and changed the game with its defense in a win over DePaul Saturday.

Players to watch, three keys for Creighton vs. No. 21 Xavier

It's a Pink Out Saturday, Creighton's annual game-day fundraising event. The players will wear specialized jerseys and sneakers against No. 21 Xavier. Can the Jays win? Let's preview the matchup.

Creighton collapses in second half as No. 21 Xavier seizes control with 29-2 run

Creighton men's basketball wilted away after building a convincing first-half lead against No. 21 Xavier, unable to retake the momentum as the Musketeers seized control with a 29-2 run after halftime. 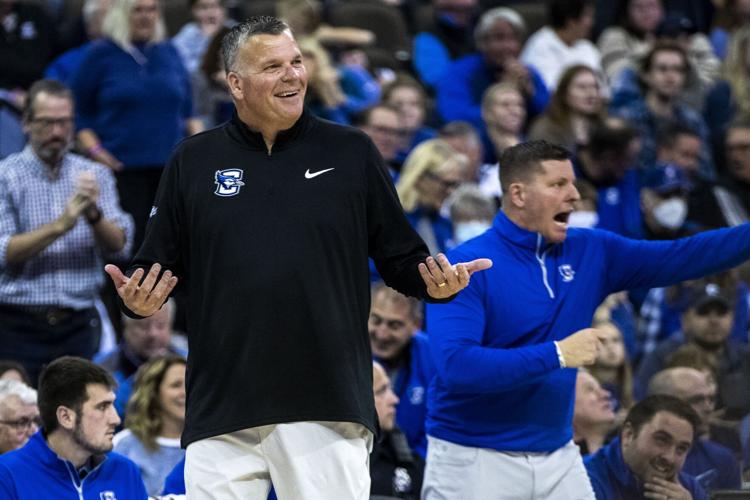 Creighton's Greg McDermott laughs at Ryan Hawkins during a game against Arkansas-Pine Bluff at CHI Health Center on Tuesday, November 9, 2021. 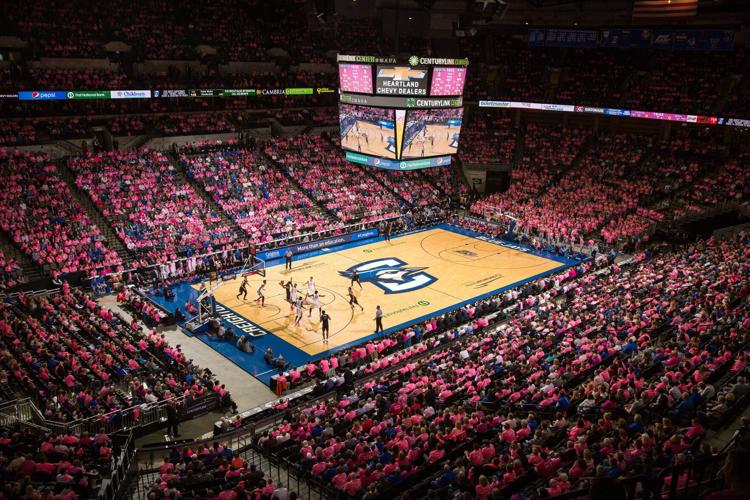