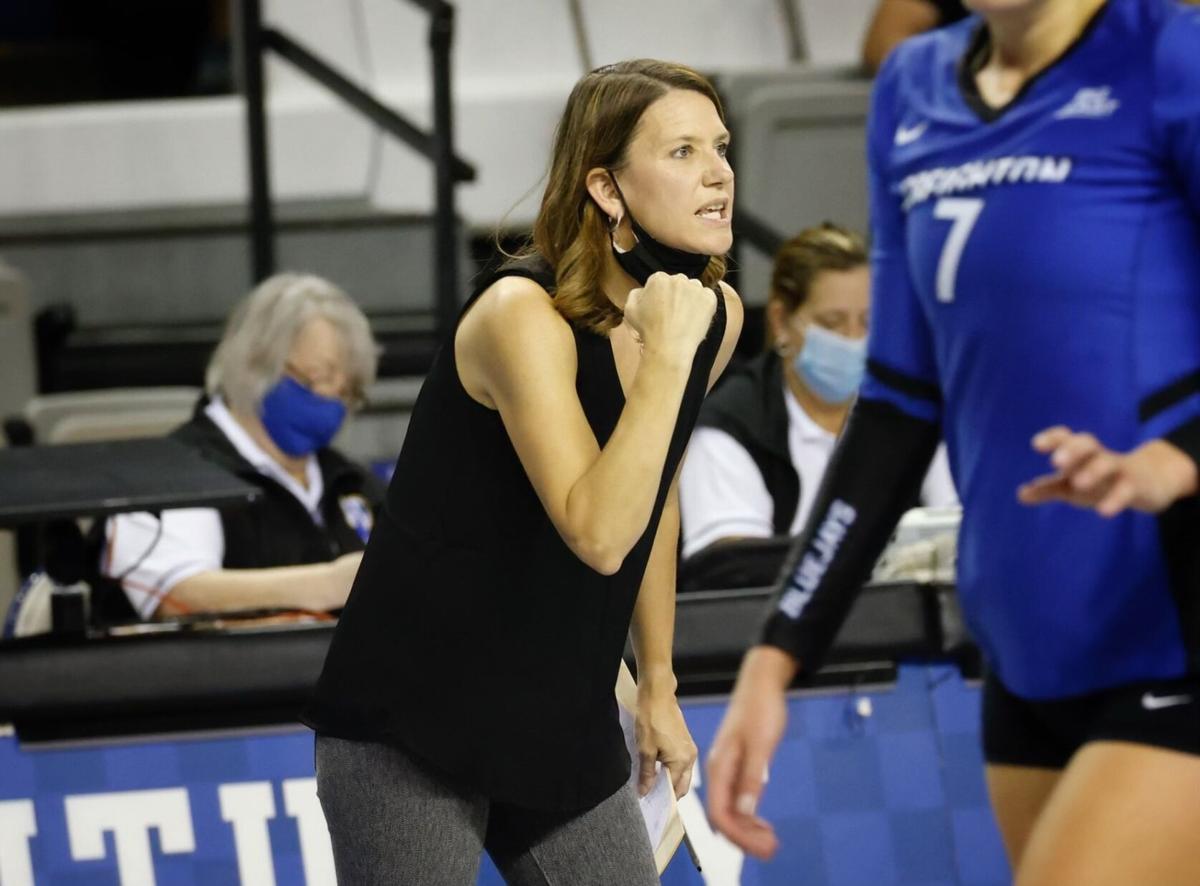 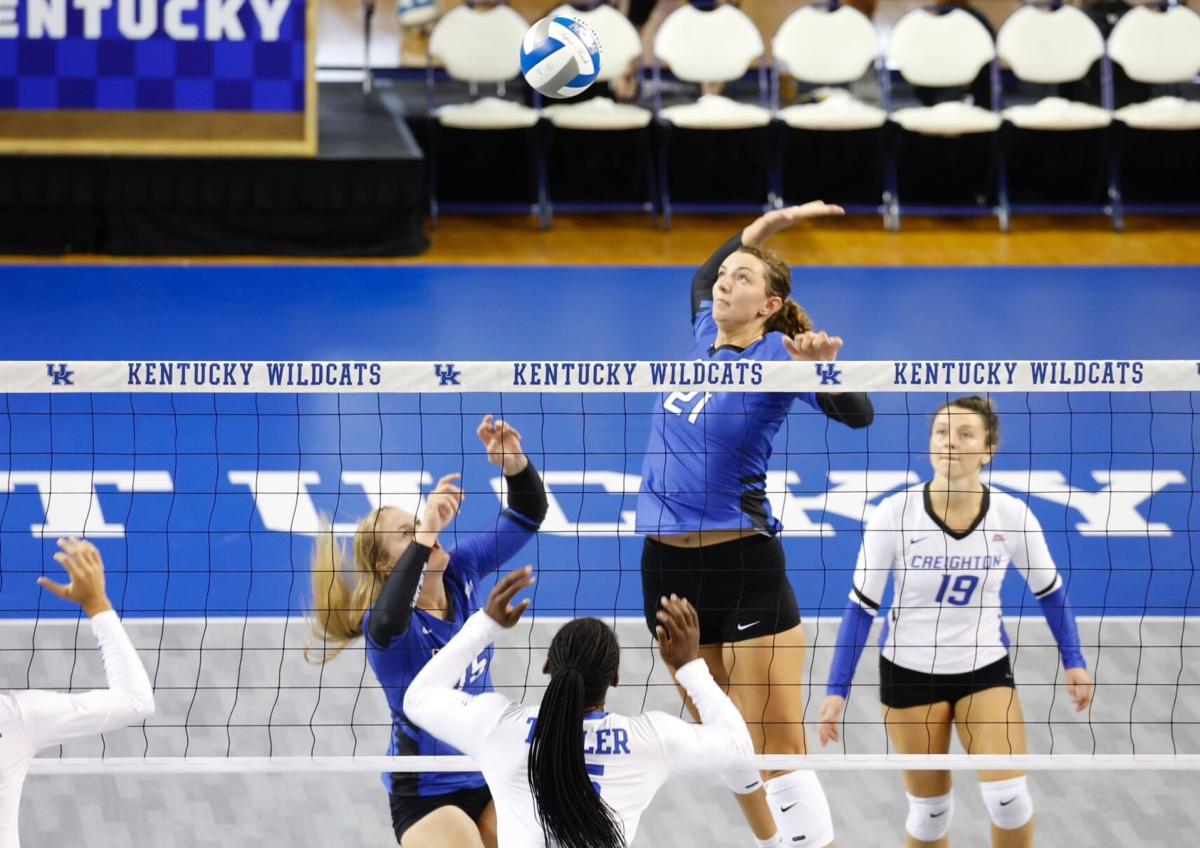 Creighton's Naomi Hickman goes up for a spike. 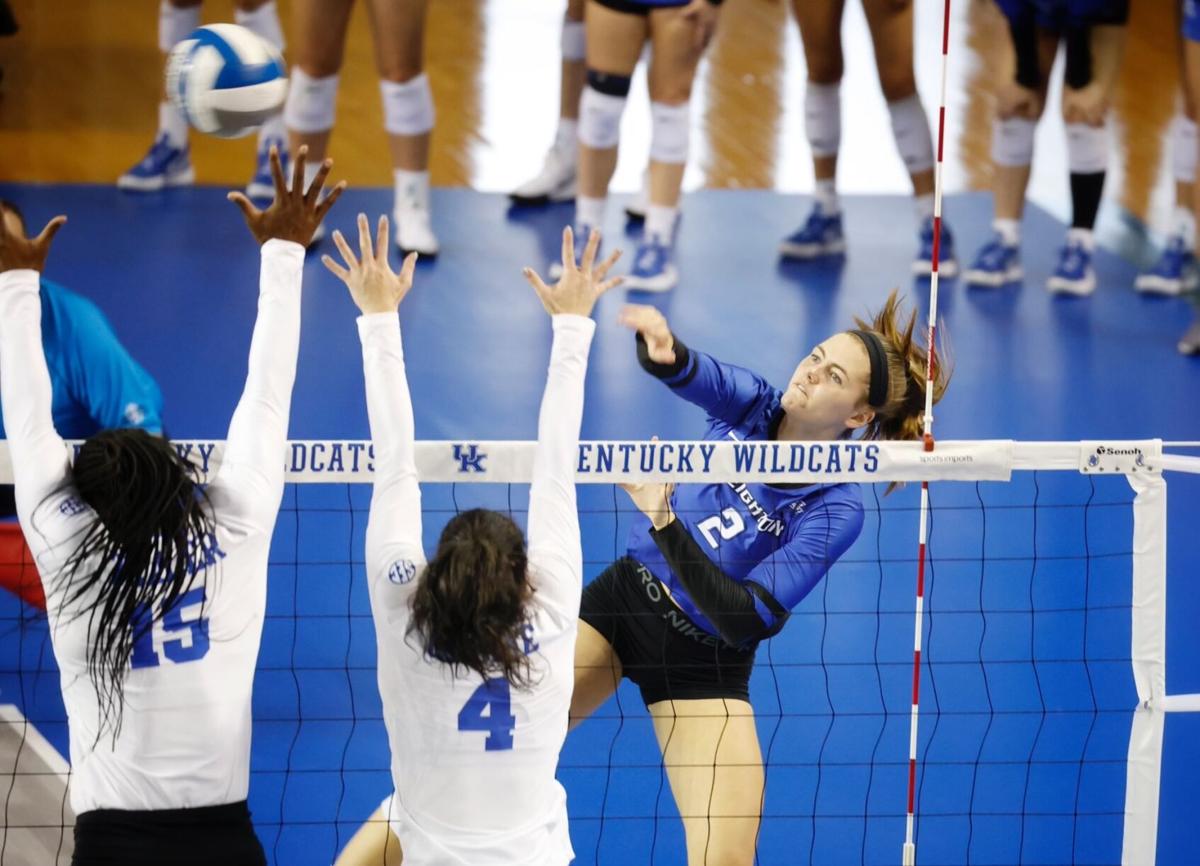 Creighton freshman Norah Sis hits the ball over the net against Kentucky.

LEXINGTON, Ky. — Creighton's players did get to scream and dance in their locker room after upsetting the reigning national champions Saturday morning. But the celebration didn't last long.

The Jays had another match in five hours.

After they'd survived a five-set thriller against Southern California Friday and knocked off No. 3 Kentucky Saturday morning, this CU squad needed to regroup and recharge for an afternoon match against Northern Iowa.

So coach Kirsten Bernthal Booth turned to her leaders.

"I'm not kidding — the stuff that our upperclassmen were saying on the importance of the (Northern Iowa) match — I was on the outside of the door as they were leaving the locker room," Booth said. "We just have great leadership that made sure the team understood, we have to be ready for a very good Northern Iowa team."

After sweeping the Wildcats Saturday morning, CU recorded a sweep of UNI that afternoon to cap an impressive weekend.

The Jays improved to 6-0. It's their best start in program history.

The victory over Kentucky also marks the first time in school history that Creighton's knocked off a reigning national champ (previously 0-5). The highest-ranked team that CU defeated in school history was previously No. 3 Washington, so Saturday's defeat of the Wildcats matches that feat. Saturday's first win was the 500th career victory for Booth.

The weekend's victories will certainly catapult Creighton up the Top 25 rankings next week — the Jays, who received votes last week, began the year unranked in the preseason poll for the first time since 2015.

"This tells us we have the potential, but now it's a matter of going back into the gym and getting better," she said. "The fun thing is, we as coaches — and I think the team, too — can see areas where we still need to get better in."

That said, Creighton definitely had moments of dominance Saturday.

In the 25-19, 25-22, 27-25 win over Kentucky, CU never trailed by more than three points in any set — until the final moments of the third game. The Wildcats were up 23-20, threatening to extend the match, when the Jays responded.

Creighton scored three straight points to tie it at 23-all. And CU ultimately clinched the match win with a kill by junior Kiana Schmitt and a kill by freshman Norah Sis.

Senior Jaela Zimmerman, who had 18 kills against Kentucky and 12 more against UNI, was named the weekend's MVP.

The Jays will return to action Wednesday when they host No. 4 Nebraska at the CHI Health Center.

Creighton's new libero has faced off against Nebraska before and the match did not go well for her former team. Now Abby Bottomley is aiming for a different result as the Jays take on the Huskers.

McKewon: Nebraska's aggressive defense was too much for Creighton to overcome

Behind Nebraska volleyball's back-row wizards, the Huskers' remarkable defense prevented one explosion after another in a sweep that reduced Creighton to a mid-week speed bump.

Creighton's Naomi Hickman goes up for a spike.

Creighton freshman Norah Sis hits the ball over the net against Kentucky.