Texas A&M Corpus Christi’s Steve Lutz, top, was a Creighton assistant with Central Connecticut State’s Patrick Sellers, above. Both are in their first seasons as head coaches. 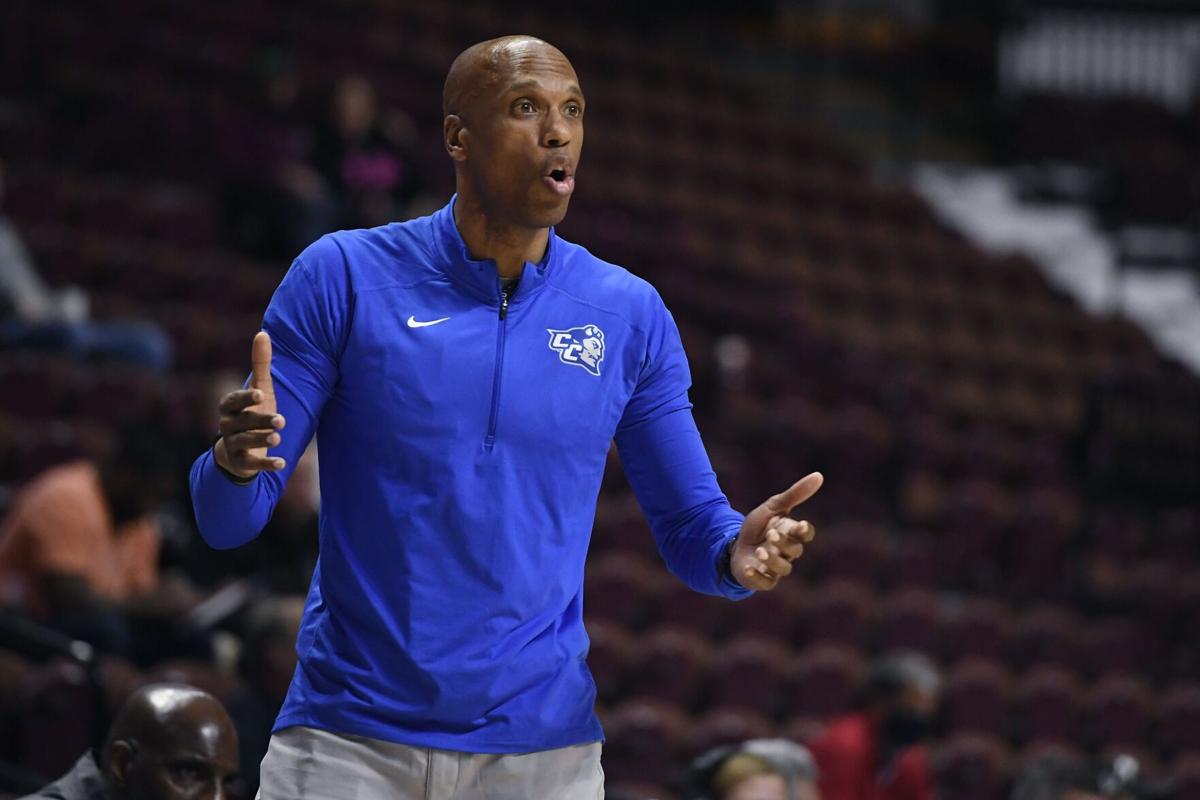 Patrick Sellers was there on the Creighton sideline for two seasons, too. He’s now the coach at his alma mater, Central Connecticut State.

Darian DeVries spent 20 years on CU’s sideline before taking over at Drake, a 2021 NCAA tourney team.

A former Creighton assistant walked across the Baxter Arena court Dec. 11 and grinned as he spotted the dozens of familiar faces behind the Texas A&M-Corpus Christi bench.

The game was well over. The arena had mostly cleared out. Except for this one section of fans who kept shouting and clapping.

Steve Lutz hasn't had too many moments in his first year as a coach to take a deep breath and reflect on his journey — maybe briefly during his once-a-week drives to San Antonio to see his mom or once he dropped the kids off at school then gets to cruise along Ocean Drive with a picturesque view of the bay all the way to his office.

His Texas A&M-Corpus Christi team had just extended its school-record start to 9-1 with an 87-73 win over UNO. All those Omahans he and his family befriended over seven years in the city were still hollering after Lutz addressed his team in the locker room.

"Tell them all where we're going ... Jimi D's," Lutz said to his 9-year-old son Jackson, who ran onto the court for a quick hug before darting back toward the stands.

Lutz had a couple of hours to hang out that night.

Then it was back to the hotel. The team bus left at 8:30 a.m. the next morning for a six-hour drive to Minneapolis. A game against Minnesota was in three days.

"You've got to pinch yourself every once in a while," Lutz said. "I'm extremely blessed to be in the position I'm in."

He and a couple of other former Creighton colleagues are thinking the same thing.

It was just a decade ago that Lutz sat in CU meeting rooms with assistant Darian DeVries, who's been Drake's coach the past four years. Patrick Sellers was there on the Creighton sideline for two seasons, too. He's now the coach at his alma mater, Central Connecticut State.

Before the Bluejays got to raise their first Big East championship banner and snap a 47-year Sweet 16 drought. Before their space-and-pace playing style resonated with top-tier recruits. Back when the foundation was being set.

That's when McDermott had three rising stars in the coaching business on his staff.

They were each committed to building Creighton's program, but they all worked with the idea that they could one day lead their own programs.

Now they're realizing their dreams.

"Those 20 years at Creighton, to be honest, I was always enjoying the moment and where I was at," said DeVries, who coached under Dana Altman before joining McDermott's staff. "There was kind of only the one job that I thought — for me and where I was at — seemed to make a lot of sense for me. That I could really dive into.

"It was going to take something pretty special for me to leave Creighton. Because I absolutely love Omaha and everything that goes with it."

DeVries was back in Omaha three days before Lutz, when Drake played UNO on Dec. 8. The Bulldogs rebounded from a slow first half to earn a 78-70 victory.

Lutz watched it. Then reached out to DeVries. Three days later, Lutz's squad was running one of DeVries' set plays.

"We scored on three out of the four, I think," Lutz said with a smile.

Both have carried elements of the Creighton system and culture to their programs. Sellers, too. When he was introduced as CCSU's coach in May, Sellers credited McDermott for being his biggest offensive influence.

Central Connecticut State (3-9) is scheduled to open league play Wednesday. The Blue Devils are coming off a 75-65 win over Hartford.

The Lutz-led Islanders are 10-3. It's a transfer-heavy roster that plays fast and creates havoc. Texas A&M Corpus Christi might be one of the Southland Conference favorites.

And DeVries has Drake at 9-4, hoping to lead the Bulldogs to a second straight NCAA tournament and a second Missouri Valley regular-season crown in four seasons. The two-time Valley coach of the year signed an eight-year contract extension in March.

McDermott isn't surprised by any of the success so far.

"Obviously, they wanted to be head coaches — as do the guys on my staff now," McDermott said. "It's my hope that can become a reality for these guys. It's good to see them doing well. They're great guys and also terrific basketball coaches."

The Creighton-DePaul men's basketball game that was supposed to be played Dec. 20, but was postponed due to COVID, has been rescheduled for February.

Players to watch, three keys to victory for Creighton at No. 19 Villanova

It's the Creighton-Villanova rematch. The Jays won the first game 79-59 on Dec. 17 in Omaha. And now they will try to do it again. Here's a preview of what it'll take for CU to win.

Players to watch, three keys to victory for Creighton at No. 17 Xavier

The Jays are set to take the court again Saturday when they travel to face No. 17 Xavier. It's yet another difficult test in the early portion of Creighton's Big East schedule. Here's the preview.

Texas A&M Corpus Christi’s Steve Lutz, top, was a Creighton assistant with Central Connecticut State’s Patrick Sellers, above. Both are in their first seasons as head coaches.

Patrick Sellers was there on the Creighton sideline for two seasons, too. He’s now the coach at his alma mater, Central Connecticut State.

Darian DeVries spent 20 years on CU’s sideline before taking over at Drake, a 2021 NCAA tourney team.