LINCOLN — Tony Tuioti wasn’t surprised. C’mon. Nebraska’s defensive line coach might have spent only one year with Carlos and Khalil Davis, but their performances at the NFL combine — when both blazed fast 40-yard dash times and Khalil ran the fastest 40, well, ever, for a man over 300 pounds — were precisely what Tuioti expected.

“I knew once the twins, they get in the combine, they were going to blow the roof off in terms of what they can do physically,” Tuioti said. “Those kids, they’re fast, they’re tough, they’re strong.”

And they’re gone, too. After five years in the program, the twins won’t practice again in a Husker uniform. Along with nose tackle Darrion Daniels — who’s also looking toward an NFL future — they combined for 111 tackles, 19 tackles for loss and 13½ sacks. That dwarfs the returning production and prompts the obvious questions about depth, young players stepping up and leadership.

Senior defensive end Ben Stille is the answer to that last question, by the way. He spoke to the media March 9 — “I definitely feel a lot of responsibility to bring a lot of those young guys along,” Stille said and, more importantly to Tuioti, stayed late after practice with a teammate who needed him for accountability.

Before NU’s practices were halted by the coronavirus, nose tackle Damion Daniels, you see, was trying to lose weight.

“Snacks knows he’s got to get himself in shape, and after practice, everybody’s going in and he’s running extra gassers,” Tuioti said, referring to 340-pound Daniels by his nickname. “And the guy with him is Ben Stille, making sure he’s not cutting corners on the runs.”

Daniels, it should be noted, is Nebraska’s lone true nose tackle in spring camp. Playing behind his older brother, he averaged fewer than 20 snaps per game last season.

“The 16 snaps he’d give you are really good,” said defensive coordinator Erik Chinander, who’s being a little charitable, but let’s roll with it. “Some of those snaps, he’s throwing people around, but he burns gas really fast. He’s got to get his stamina up so he can give us upwards of 30-40 snaps per game.”

That’d be half of a game. The other half, Chinander said, would be filled right now by “job swappers” — guys who can play nose, defensive tackle and defensive end. Chinander uses all three in his defense.

Junior college signee Jordon Riley — all 6-foot-6 and 327 pounds of him — is one candidate. Chinander is going to hold off effusive praise for a while — NU has had two practices — but Riley’s work ethic since he arrived two months ago has turned some Husker heads.

“I really like his foot speed — he can collapse the pocket — and he’s got long levers,” Tuioti said. “Between him and Damion Daniels, I think that’s a good starting point for us at nose.”

And then there’s Ty Robinson, the 6-foot-6, 315-pound redshirt freshman who arrived as a blue-chip recruit and played two games last season. His name bounced around the sixth floor March 9 as someone coaches and teammates expect to be a major contributor in 2020. Robinson has a better grasp, Chinander said, of the kind of consistency it takes to play football against developed college linemen as big as he is.

Add in ends Deontre Thomas and Casey Rogers, Tuioti said, and that’s the six he feels comfortable playing in a game right now. One true nose, two guys who can move around like Carlos Davis did last season, and three ends.

“I’d like to build that and get to eight,” Tuioti said. Junior college transfer Keem Green — who frankly struggled last season after he showed up midway through training camp and had to cut bad weight — has made strides and got more repetitions March 9, Tuioti said, than any other lineman. Tuioti added sophomore Tate Wildeman and redshirt freshman Mosai Newsom to the list of players he’s watching closely. Freshmen Nash Hutmacher and Marquis Black, plus junior college signee Pheldarius Payne, arrive this summer.

The talent, size and length, Chinander said, are there. Yes, the athletic profile is different from that of the Davis twins, who tended to play closer to 300 pounds and stood 6-2 (Carlos) and 6-1 (Khalil), respectively. The twins’ athleticism, Chinander said, helped them to narrow the gap created by their lack of prototypical size for a 3-4 defense.

But Chinander pointed to the majority of defensive linemen at the combine being the size of the players Nebraska currently has.

The better the guys up front can manage their gaps, the freer the inside linebackers behind them can be to make tackles. Flip on the 2019 tape, and you’ll see a lot of humanity around the feet of Will Honas, Mohamed Barry and Collin Miller. Nebraska’s line, agile as it may have been, didn’t always hold its gaps.

So Chinander won’t concede that NU’s defensive line is taking a dip in 2020.

“Eh, I dunno,” Chinander said. “You listen to the fans and you talk like a fan, you become a fan, right? I don’t know about the drop-off. I know we’ve got kids that we like that we’ve recruited who’ve done a great job since they’ve been here. Could there be a drop-off? Sure. Could there be improvement? Sure. Could it be the same? Sure. But I like the group we’ve got. I’m very encouraged by watching them so far.”

McKewon: Northwestern's offense was shaken up in offseason. Wildcats' defense? Not so much

Northwestern has eight quarterbacks to compete for starting job and a new offensive coordinator. So the Wildcats are likely to lean on their defense once again.

The Buccaneers’ general manager will try to build a Super Bowl contender around the greatest quarterback in NFL history.

Shatel: Eric Crouch's run has taken the former Husker to the College Football Hall of Fame

Eric Crouch has had quite a run, and it has culminated with news of his making the College Football Hall of Fame last week. "It’s been awhile since I’ve received any football award," Crouch said. "It was pretty touching for me. It made me reflect on all the times I had at Nebraska and all the people who helped me. It was nothing I did on my own."

Husker recruiting targets getting plenty of attention, but no visits put 'damper' on process

Though sports at all levels began disappearing a week ago, Nebraska has continued recruiting operations even without in-person visits. Since last Friday it has made at least six offers to prospects. Other longtime targets have confirmed Husker coaches are staying in regular contact.

The Nebraska spring game is canceled. So is spring practice. Your current Husker football fix — gone. Your hunger for Husker football glory — strong. YouTube to the rescue.

Paul is the No. 25 inside linebacker and the No. 629 overall prospect nationally, according to the 247Sports composite.

A deep review of the Huskers' 2015 recruiting class, which transitioned from Pelini to Riley

Looking back, the 2015 class is probably NU’s best class at least through 2018, though it didn’t necessarily produce winning seasons.

What's the value of spring football? Former Huskers say the practices can change everything

World-Herald staff writer Evan Bland asked several former Huskers about the value of spring football? According to them, the loss of these spring practices could change everything.

Nearly all the Husker freshmen redshirted in 2019. That could bode well for 2020 and beyond

The Redshirt Army that populated much of the Huskers’ scout teams last season will be ready to make its move whenever football resumes.

Nebraska relied on its quarterback to run the ball like few other Big Ten teams have since the Huskers joined the league. 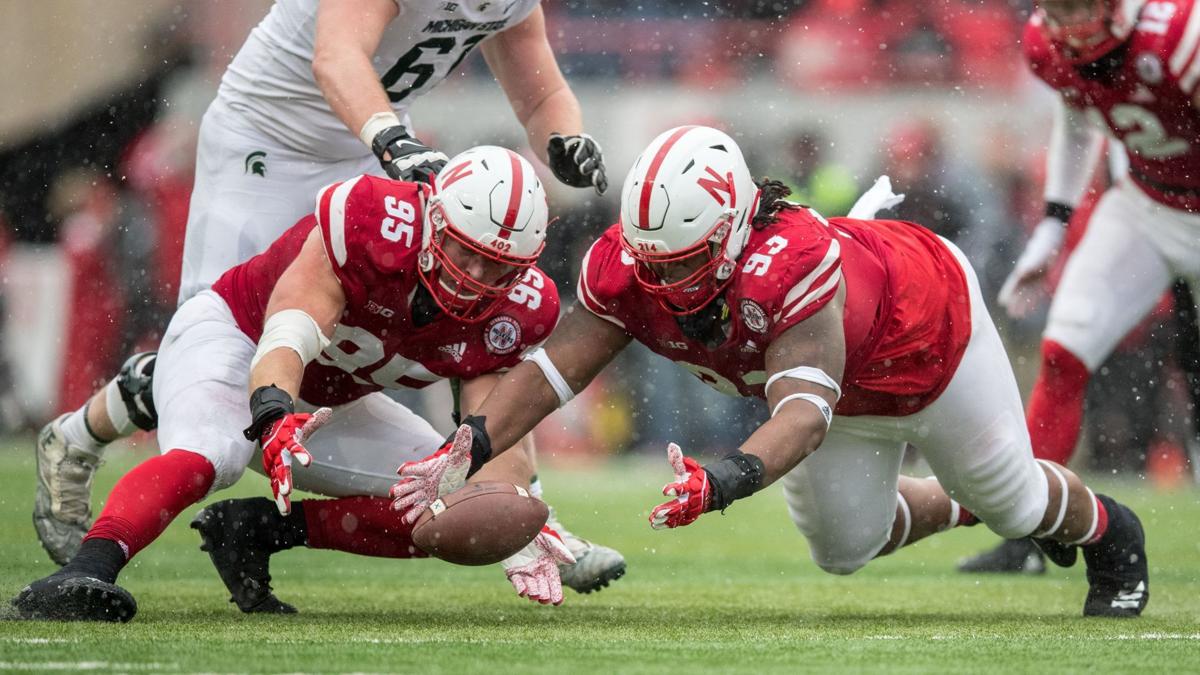 Ben Stille, left, and Damion Daniels are two of the players the Huskers will be counting on to replace Darrion Daniels, plus Carlos and Khalil Davis. 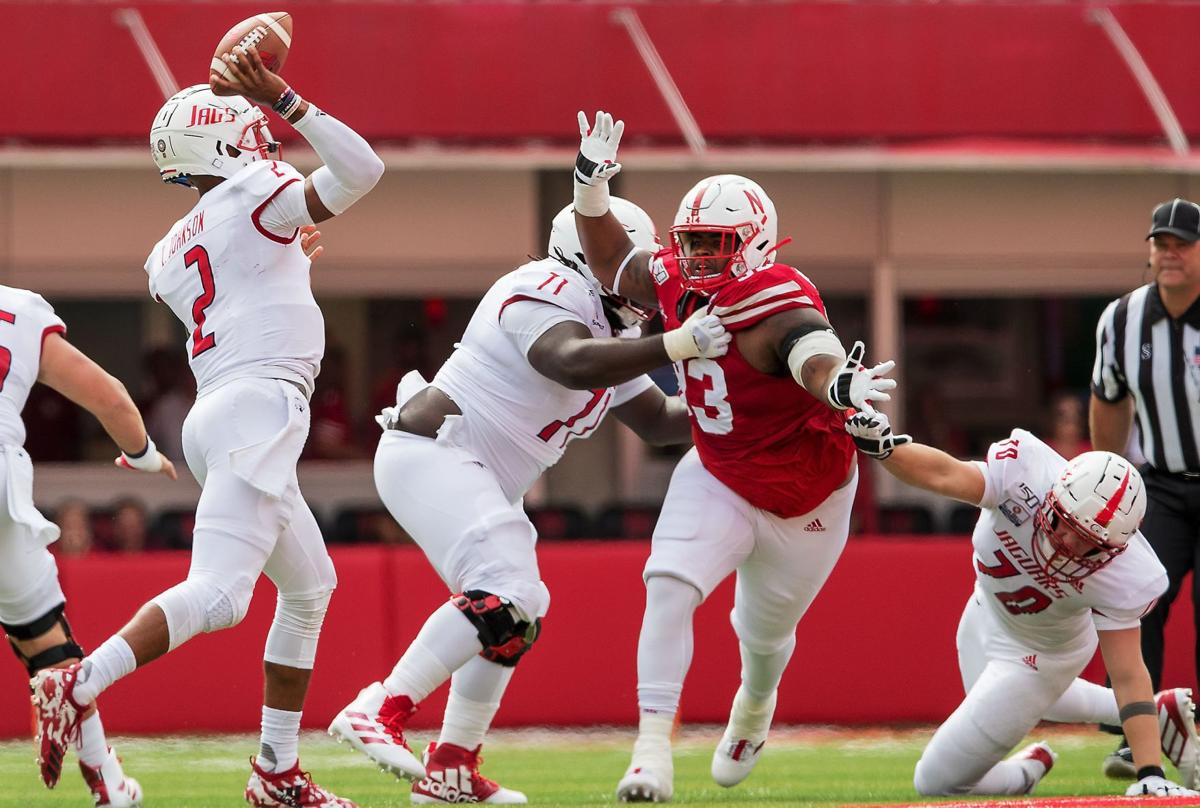 “Snacks knows he’s got to get himself in shape, and after practice, everybody’s going in and he’s running extra gassers,” NU defensive line coach Tony Tuioti said, referring to 340-pound Damion Daniels by his nickname. “And the guy with him is Ben Stille, making sure he’s not cutting corners on the runs.”