The scrutiny that comes with being a probable NFL draft pick doesn’t bother Darrion Daniels. He’s used to being under a microscope.

If the defensive lineman who played his senior season at Nebraska were to Google himself, he could find any number of critiques from various websites. “There doesn’t seem to be a lot to his game at this point beyond size and effort,” wrote draftexaminer.com. His grade on NFL.com suggests his ceiling is making the fringes of a pro roster. “He’s a try-hard rusher but doesn’t get home often enough,” one analyst wrote.

None of it surprises Daniels. He’s used to candor from his father, Tony.

“After every game, there’s a lot of people like, ‘You played great!’” Darrion Daniels said. “But my pops is like, ‘This is what you need to work on.’ So I’m very aware of that. When I sit down in these meetings and have these conversations, it’s things I already know and things I’m working to fix and get better at.”

Prognosticators agree almost unanimously that the 6-foot-4, 310-pound defender will be taken sometime Saturday, when the draft wraps up with Rounds 4-7. Daniels, who will be watching with his family at home in Dallas, will celebrate the moment less for what’s ahead and more for how far he’s come.

And his father is a big part of it.

Huskers in the NFL draft: By the Numbers

The family often tells the story of how Tony introduced both Darrion and Damion — now a junior D-lineman at Nebraska — to soccer in order to improve their coordination and footwork. Darrion moved to football in grade school but initially shied away from contact in practice. Tony took his pads and gave them to Damion, who dealt out some blows and lit a fire under big brother that hasn’t stopped burning.

Now 22 years old, Darrion still has Pops pushing him. The elder Daniels — a standout lineman at Texas Tech in the mid-1990s who spent a few seasons with the NFL’s Green Bay Packers — recorded every Nebraska game from last year and reviews video with his son. He puts him through line drills, exhorting him to keep his pad level low. Through his father’s connection to the principal of a local high school, Darrion has been able to train in an empty weight room every morning.

“He’s fully coaching right now,” Darrion Daniels said of his dad. “He does a good job of describing because he can’t really show me with his own moves.”

Though the coronavirus pandemic has hindered his ability to show scouts in one-on-one settings how coachable and versatile he can be, Daniels believes he actually improved his stock during the process. Before the Senior Bowl in January, his agent told him to expect to go between the fifth and seventh rounds. Now it’s mid-fourth to early fifth.

Character has been a common explanation for the rise. Daniels — a captain at Oklahoma State and Nebraska — said he’s spoken with plenty of other NFL prospects who have histories of substance use or legal issues. Much of their time with pro teams has been spent explaining what happened.

“I don’t even have a speeding ticket, I don’t have any failed drug tests, I have no mishaps off the field,” Daniels said. “So I get to sit down with these scouts and coaches and talk pure football. I think that’s helped me as well.”

Daniels has dropped 15 pounds since Thanksgiving and awaits a defined role at the next level. Most franchises project him as a nose tackle — the position he played at Nebraska — though some see him moving off the outside shoulder of a guard as a three-technique defensive lineman. With his time at OSU and as a Husker, he has film in three-man and four-man fronts and facing offenses from every Power Five league.

“At Nebraska I had my job and I did my job to the best of my abilities,” he said. “But I think them being able to see my versatility has helped.”

He’s also stretching and doing Pilates and yoga for the first time in an effort to stay low in the trenches. Daniels is coming off an honorable mention All-Big Ten campaign in which he started 11 games, totaled a career-high 34 tackles (four for loss) and came within 2 yards of a pick six against Purdue.

This week has allowed time for reflection, Daniels said. He’s long wanted to dominate in football, but he began his college career with an “arrogant” attitude that melted away as he learned his role and strengths within a team. What remains is a player motivated by the work still to come.

“Going from a wide-eyed freshman saying, ‘There’s no one better than me,’ to a fifth-year senior in this draft, I know now I’m nowhere near as good as I need to be if I want to be the best I can be,” he said. “I feel that’s a hard pill to swallow for a lot of people, but I swallowed it at an early age and it’s helped me throughout this whole process.”

Every Husker selected in the NFL draft since 2000

What does ESPN's FPI predict for Nebraska in 2020? It's a little complicated

ESPN's updated its Football Power Index metric for the 2020 season, and Nebraska dropped from being a top 25 team to No. 40 on ESPN's list.

The time for Nebraska football to make a big move, college football expert Phil Steele believes, was in 2019, when the schedule was friendly and the Huskers only faced five teams that finished with a winning record.

If Nebraska squints hard enough, it can find some individual cases for optimism despite the spring void. Maybe a little more downtime wouldn’t hurt some. Maybe a few had little to prove in March and April.

An upbeat Bill Moos took to the airwaves Monday evening. Amid a global pandemic, the Nebraska athletic director said his department has adjusted well to the less-than-ideal circumstances.

How does the Big Ten stack up to the SEC? Check out Sam McKewon's mock NFL draft

After coming close last year, the Big Ten could — it probably won’t, but it could — win the first round horserace against the SEC on Thursday night.

Isaiah Simmons, a Clemson star with Omaha roots, is ready for his NFL draft party

Clemson's Isaiah Simmons will likely be one of the first 10 picks in the NFL draft, but the Butkus Award winner also has strong Omaha ties.

The NFL draft starts tonight. Get ready with The World-Herald's complete pre-draft coverage.

Husker twins Carlos and Khalil Davis have been together since birth. The NFL draft may change that

Separated by five minutes at birth — Carlos is older — they’ve been dominating together, on the same teams, since forever.

On Friday's episode, Adam Carriker looks at the correlation between the NFL draft and success in college, and what this means for the Huskers.

The most socially distant NFL draft in the history of the event kicked off Thursday night by heading right into the living rooms of its draftees. And two of the first 10 selections had ties to Nebraska.

Nebraska is back on the board for the NFL draft.

Former Husker defensive lineman Carlos Davis was selected in the NFL draft Saturday by the Pittsburgh Steelers in the seventh round.

After its 56-year run of having at least one player drafted was snapped last year, NU seems poised to begin anew Saturday. 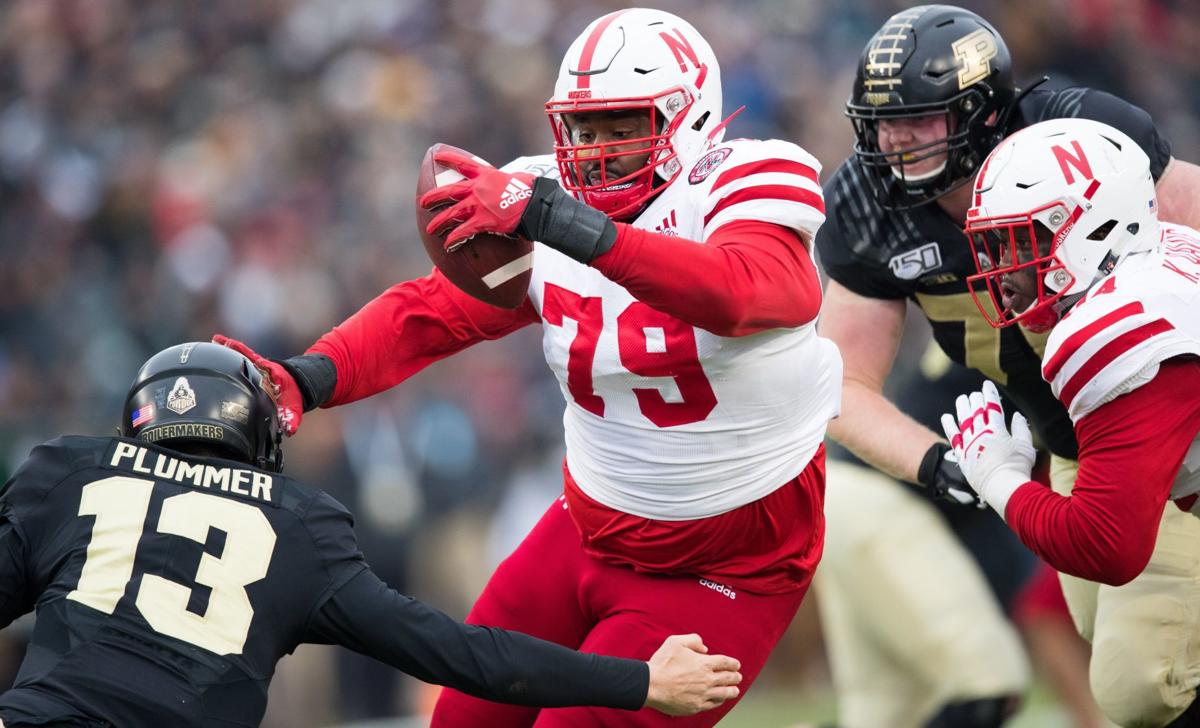 Darrion Daniels earned All-Big Ten honorable mention during his senior season at Nebraska, totaling 34 tackles and nearly had a pick-six against Purdue. 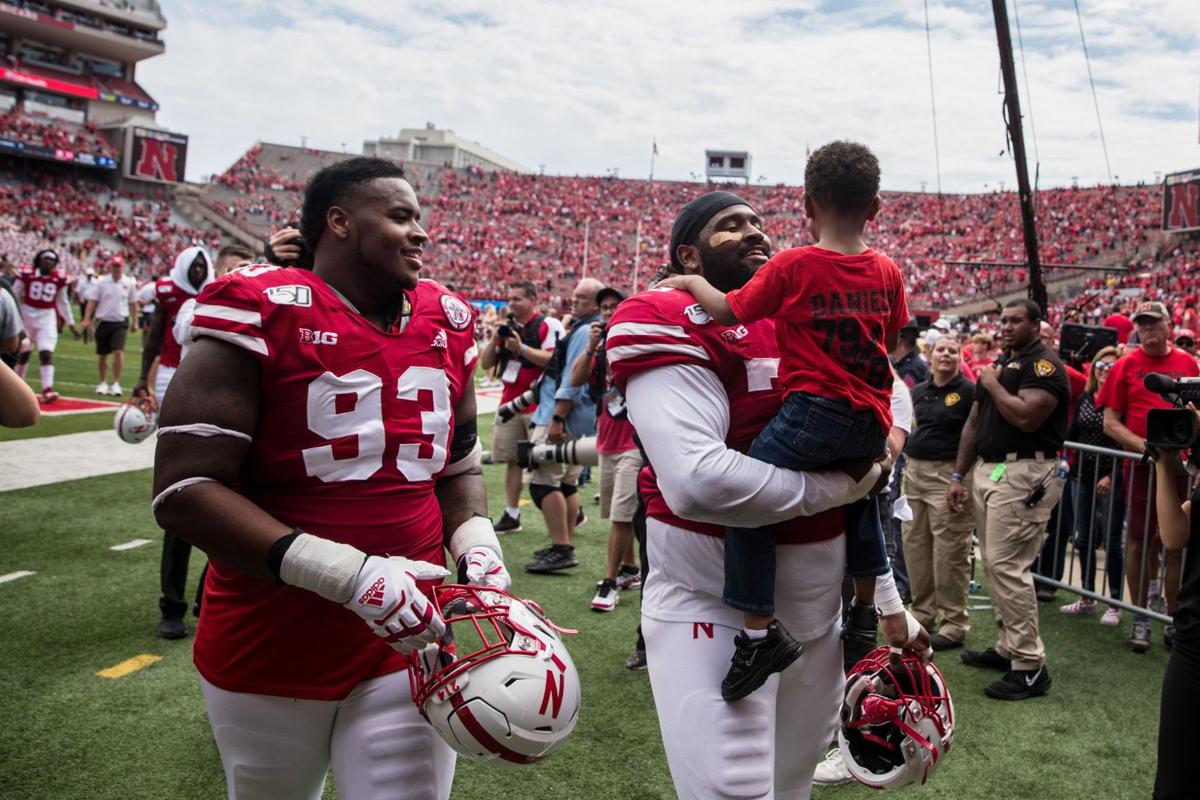 Darrion Daniels, right, moved to football in grade school but initially shied away from contact in a practice. Tony took his pads and gave them to Damion, who dealt out some blows and lit a fire under big brother that hasn’t stopped burning.