With Wisconsin up next, Nebraska football is 'digging deep' and playing for each other
4 comments
Share this

LINCOLN — Dicaprio Bootle stopped in his tracks in the hallway of the Memorial Stadium press box. A reporter had just directed a question to his teammate, and the Nebraska cornerback was curious to hear the answer.

Defensive back Braxton Clark was outlining his motivation for Saturday’s game against Wisconsin and the rest of the season. As much as the redshirt freshman would like to make an individual impression for 2020 and beyond, that isn’t what he wants this November to be about.

“At the end of the day, it’s really a team thing,” Clark said. “We’re trying to get those wins so we can get to this bowl game.”

Bootle, who had sidled up to Clark’s shoulder, responded with a hearty “amen” before disappearing down a corridor.

The moment was one clue in a trail of evidence indicating that football is the only thing on the minds of Nebraska coaches and players ahead of Saturday’s home tilt with No. 15 Wisconsin. The Monday press conference was not a therapy session on culture or feelings. It was not a pep rally with bold talk and promises.

With a bye week providing distance from the Purdue loss and a matchup with a Big Ten West Division power looming, the Huskers (4-5, 2-4 Big Ten) kept their thoughts confined to on-field matters.

Coach Scott Frost spoke in detailed specifics about the inner workings of Wisconsin’s three- and four-man pass rushes while reflecting on how his up-tempo offense contrasts with the Badgers’ clock-eating attack. Linebacker Mohamed Barry broke down run fits and described different ways defenders can communicate with one another before a snap. Quarterback Adrian Martinez emphasized the importance of playing a clean game.

Motivation, they agreed, is self evident for those who love the game. But a little time off — and the perspective that comes with it — makes this stretch run even more invigorating.

“It’s not fun to be in that locker room when we’re losing the way we are losing, so I feel like a lot of the players just found a renewed mindset,” outside linebacker JoJo Domann said. “We are digging deep. This isn’t what we wanted, this isn’t what we hoped for, but it’s our reality, so just trying to do our best day in and day out and preparing for this week.”

Added sophomore defensive back Cam Taylor-Britt: “I can say it is a new spirit in the locker room.”

That doesn’t mean the Huskers are naive to their next challenge. Limiting running back Jonathan Taylor — his 1,259 rushing yards (6.05 per rush) are third most nationally — will be a major focus. So will being efficient on offense, given that Wisconsin’s own attack leads the country in average time of possession (36 minutes, 52 seconds).

Nebraska has lost six straight to the Badgers since its only win in eight tries as a Big Ten member in 2012. So even the comment from Wisky linebacker Zack Baun that made the rounds Monday on social media — “I don’t think it’s a rivalry yet. Maybe it was before, but it definitely isn’t anymore.” — caused virtually no stir 500 miles southwest of Madison.

But the Huskers can point to Illinois, which upset Wisconsin as a 30½-point underdog last month, as inspiration. They can point to themselves and the self-inflicted mistakes that have hounded them all season. How good can they be with a cleaner performance?

“We haven’t been very far away on quite a few plays, and just a little more is (going to) get us around the corner and get us over the hump,” Frost said. “I think maybe a little bit of fear of making a mistake is from being young players, too. ... All you can do is your best on every play, and that’s how we’re going to continue to try to get our guys to play.”

Barry saw telltale signs of boosted team morale during Monday’s practice. There was a little showboating after big plays. Swarm tackles on defense. Conviction on offense. Giddiness in warmups just to be back on the field after limited practices last week.

If nothing else, Bootle said, he wants to see growth in the last three games. Stop making the same mistakes and finish. The possibility of that happening against Wisconsin is enough right now. After all, what else is there to lose?

“We’ll still play for each other and we still got each other’s backs,” Bootle said. “Everything hasn’t been perfect. But as long as we keep fighting, we keep pushing forward, then eventually good is going to happen. A lot of guys are driven by that.”

"It's just another game, another football game, the trophy's never left here, so I don't think it's a rivalry yet," Wisconsin linebacker Zach Baun said.

Wisconsin running back Jonathan Taylor is used to having opponents zero in on him during game preparation. He obviously has Nebraska's attention this week.

JoJo Domann got caught up in the moment, made a critical error because of it and needed the advice and encouragement of two coaches to help him move past it.

McKewon: Between Adrian Martinez and Joe Burrow, did the Huskers make the right choice?

Did coach Scott Frost and Co. miss on Joe Burrow in 2018? Only in perfect hindsight. Which is to say, no, they didn’t miss.

Fresh off Nebraska's bye week, Scott Frost had a lot to say in advance of the Wisconsin game.

Press conference, Nov. 11: For a Husker team sick of beating itself, Wisconsin provides plenty of motivation

The focus was on football at Monday's press conference, as Nebraska coach Scott Frost said the Huskers will need to focus on getting in the right spots, manning up, and tackling to get past Wisconsin this week.

The Nebraska-Maryland game is set for a 2:30 p.m. kickoff on Nov. 23, the Big Ten announced Monday.

'Do your job': The message from their coach is clear if the Blackshirts hope to slow Wisconsin

As Nebraska prepares for a road grader of an offensive line and an All-American-level running back, Erik Chinander borrowed a line from a surefire Hall-of-Fame NFL coach.

Garrett Nelson was overcome for a second. He hoped his mom wouldn’t cry when he told her the best news: The Blackshirt he’d been working to get? He was wearing it. No. 44. As a true freshman.

Check out all the video from Tuesday's Huskers football practice as compiled by The World-Herald.

Since Nebraska joined the Big Ten in 2011, its boogeyman has been in the Badger backfield. The boogeyman has switched names and numbers. But he’s tortured Nebraska none-the-less.

When Memorial Stadium glows red, it's time for the Huskers to 'Come A Runnin'

Some have speculated that the musical display, which first took place this season at the Ohio State game, is becoming a new tradition paired with the red lighting.

Get ready for Husker football and follow live coverage all day

Check out our preview stories for today's game against Wisconsin and stay tuned for complete coverage from Memorial Stadium. 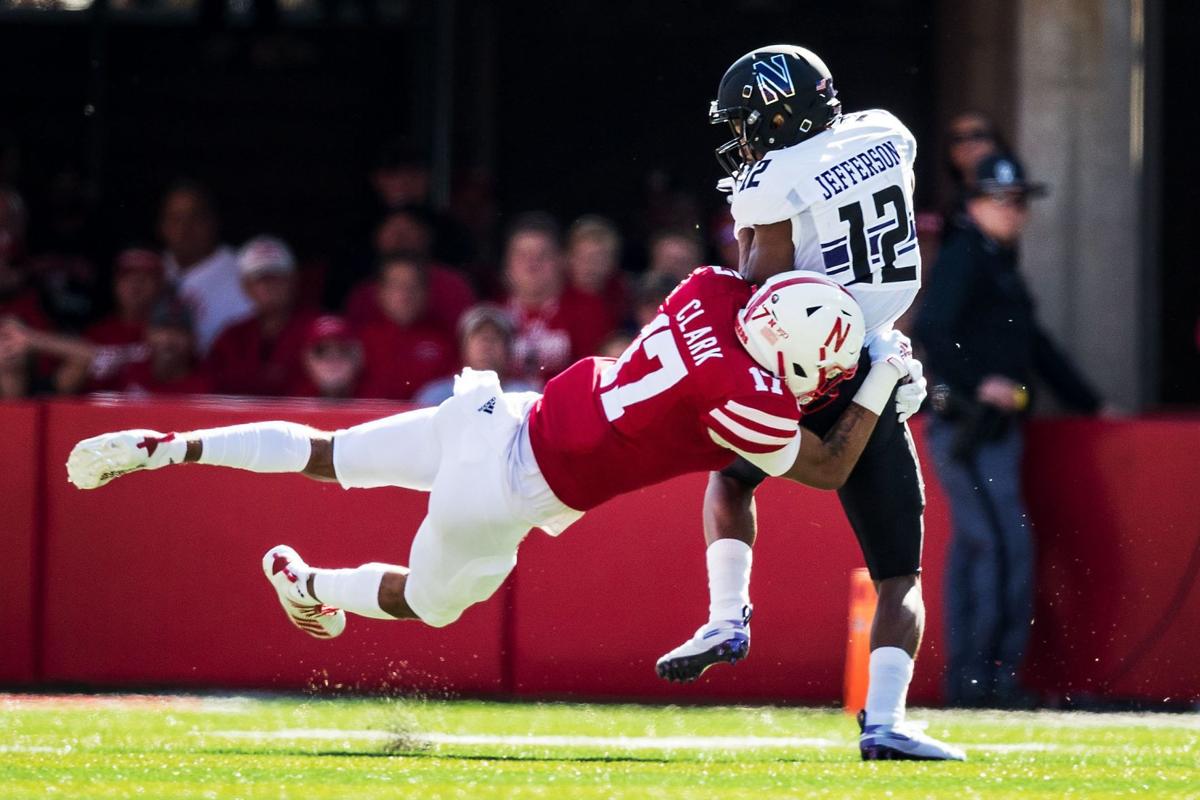 Braxton Clark tackles Northwestern's JJ Jefferson. When asked about his motivation for the Wisconsin game, Clark replied, "It’s really a team thing. We’re trying to get those wins so we can get to this bowl game.” 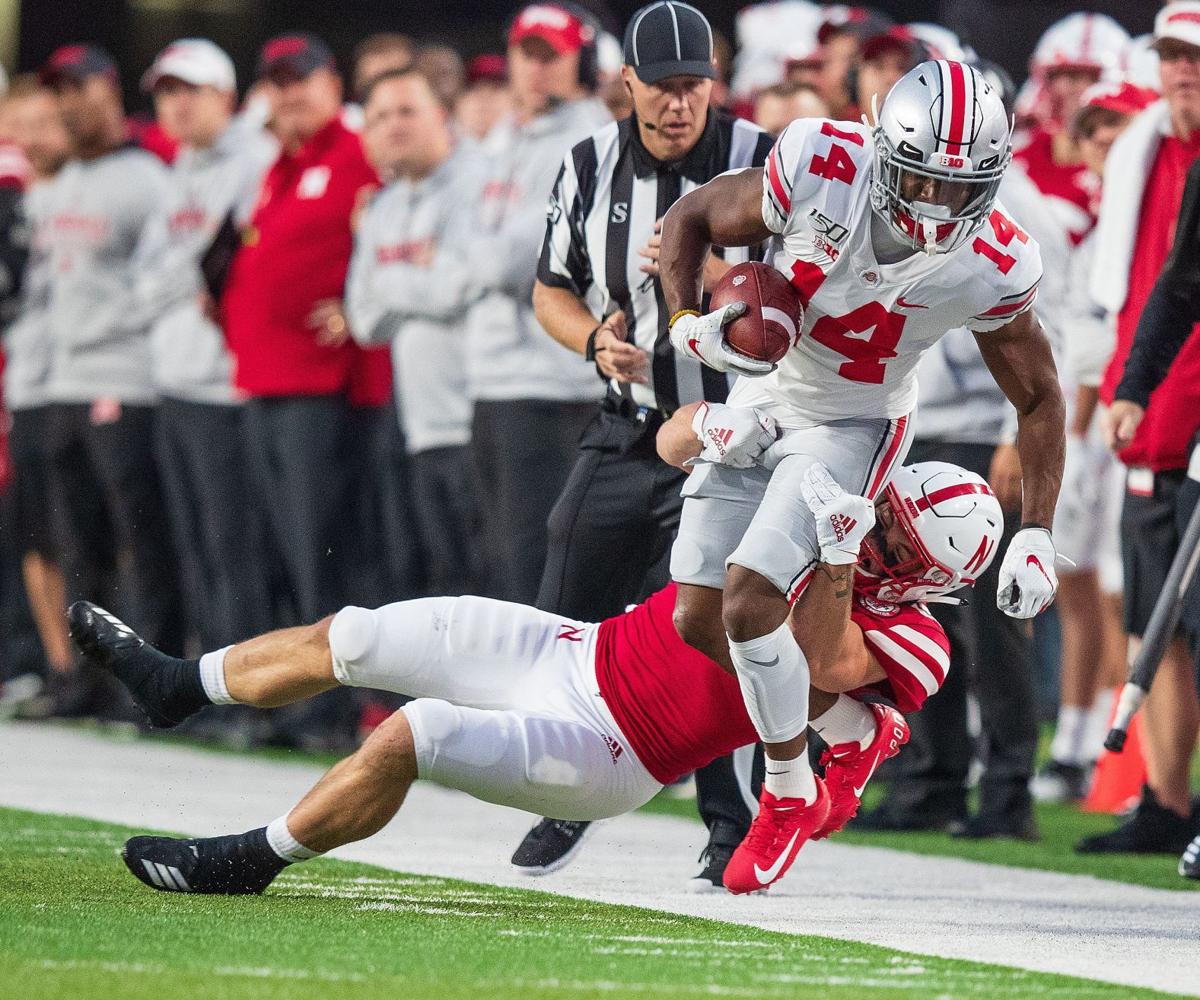 Ohio State's K.J. Hill is tackled by JoJo Domann. “We are digging deep," Domann said. This isn’t what we wanted, this isn’t what we hoped for, but it’s our reality so just trying to do our best day in and day out and preparing for this week.”