Erik Chinander grinned last week as he told a gathering of fans how he helped land one of his favorite defensive backs in Nebraska’s 2018 class.

The story was simple enough. Chinander and his defensive coaches at Central Florida liked Cam Taylor and wanted the three-star athlete from Montgomery, Alabama, to play cornerback for them. But Taylor — committed to Missouri for a time and holding a host of other Power Five offers — wanted to be on a bigger stage.

Once Chinander and the rest of the staff joined Scott Frost at Nebraska in December, it was a new discussion.

For Chinander and defensive backs coach Travis Fisher, the standards won’t change for who they want in their secondary even if more recruits will be interested. Their list of criteria guided them as they offered at least 27 DBs from their hiring date Dec. 2 to Jan. 6. It will be central as they begin work on the 2019 cycle and continue to build up scholarship numbers at the position Frost called “way low” during the early signing period.

Those traits are common when coaches describe the five defensive backs Nebraska signed in Frost’s first class to fans and media. “He’ll really come up and hit you,” Chinander said of Texas safety Cam Jones, drawing loud applause from a crowd at the Rococo Theatre in Lincoln last week. “He will punish you,” Fisher said of Florida safety C.J. Smith during a fan gathering in Columbus.

Fisher called juco transfer Deontai Williams “dangerous” in how hard he hits, adding “He’s gonna bring back the Blackshirts, in my opinion, just watching him play.” Chinander, on  Florida corner Braxton Clark, said, “He makes Coach Frost look like a little guy, so that’s really good to have him.”

Size isn’t a deal-breaker for the Nebraska staff, though all the 2018 signees range between 6 feet and 6-3 and 175 to 200 pounds. Beyond  athleticism, Chinander and Fisher are seeking players with a knack for finding the ball.

Often that means athletes who also starred on the other side of the ball in high school. Taylor was a dynamic quarterback. Smith was a play-making receiver. Jones returned kicks, as did Williams during his high school days in Jacksonville, Florida.

“We value length a lot, we value toughness, guys that can tackle,” Chinander said. “We also value multiposition guys. We love watching guys that played offense, played return game, on special teams, played kickoff and punt return on special teams so we could see ball skills and their willingness to be violent during the game. Some of these guys, we don’t know if they’re going to be safety or corner or nickel or outside ’backer yet. But I think they give us a lot of versatility and I’m really excited about some of these kids.”

Said Fisher: “Just from my experience playing DB, I can pretty much tell the ones who can switch over and play on the other side of the ball.”

Knowing those qualities ahead of time allowed the new NU staff to offer all five eventual signees in December after each had been committed to another Power Five school within the previous six months. Nebraska didn’t bring any defensive backs to campus out of the 2017 cycle.

Fisher —  an eight-year NFL pro after being drafted out of UCF in 2002 — said signing players NU wants is just the start. There’s an ultra-aggressive scheme to teach. There are technique lessons like proper foot placement in defending routes, eye discipline in man coverage (watch the receiver, not the quarterback) and how to jam pass catchers at the line of scrimmage.

But it starts with who is in the room. And coaches say their 2018 additions at secondary are the beginning of a trend in Lincoln. 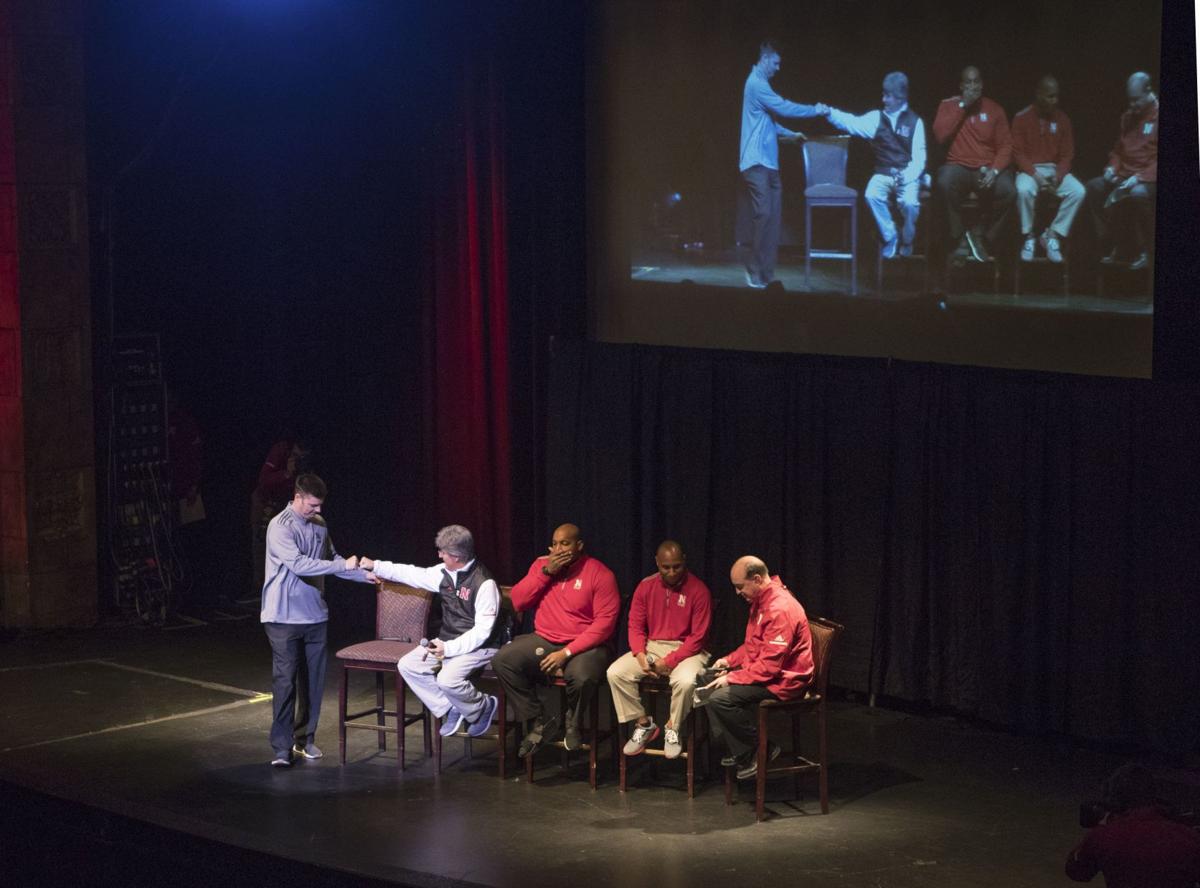 Nebraska's offensive coaches enter the stage at the Rococo Theatre to talk to fans about the 2018 football season. 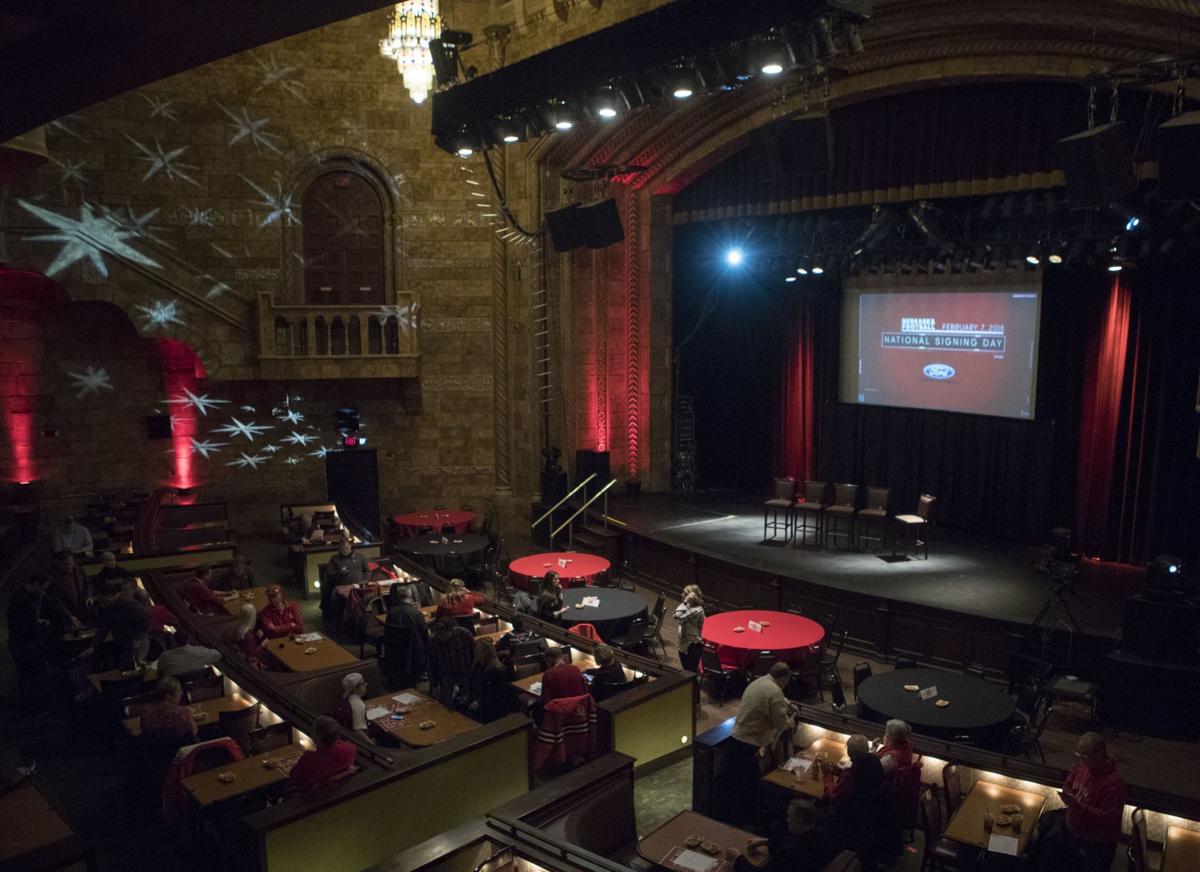 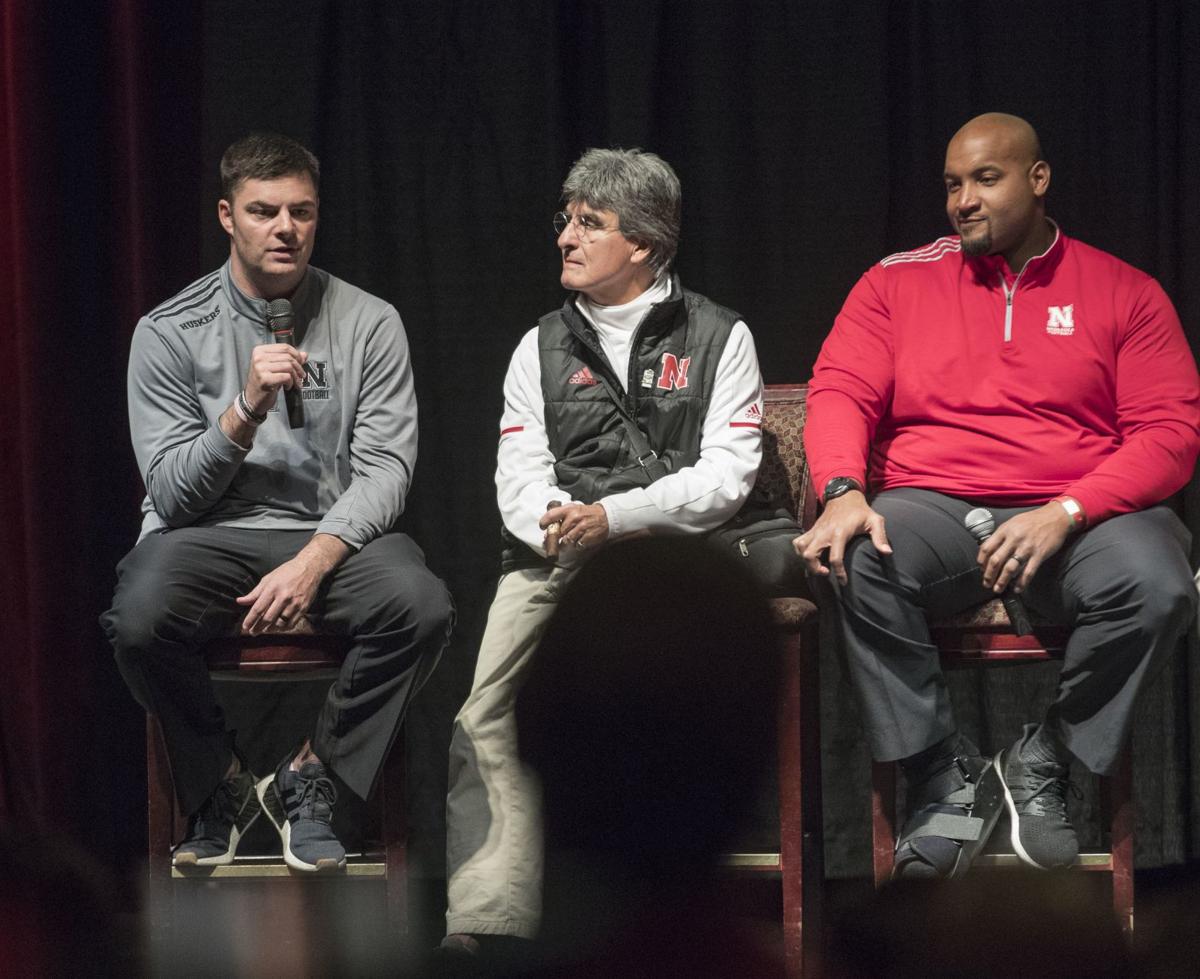 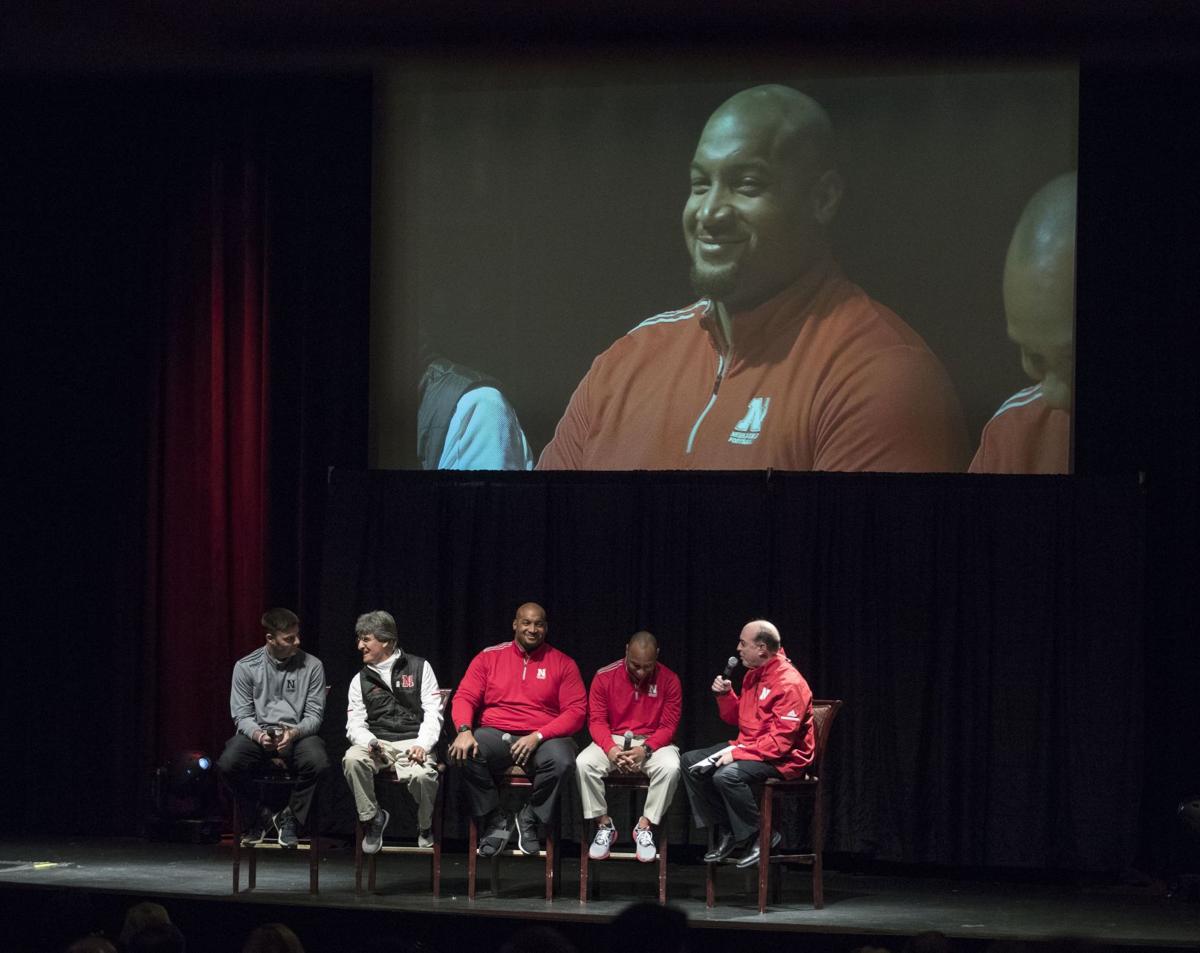 Nebraska assistants Ryan Held, Mario Verduzco, Greg Austin and Troy Walters talk with radio voice Greg Sharpe at a signing day event. Held, the running backs coach, spoke glowingly at a press conference about back Maurice Washington, who signed with NU on Wednesday. “Our fans will love him,” Held said. 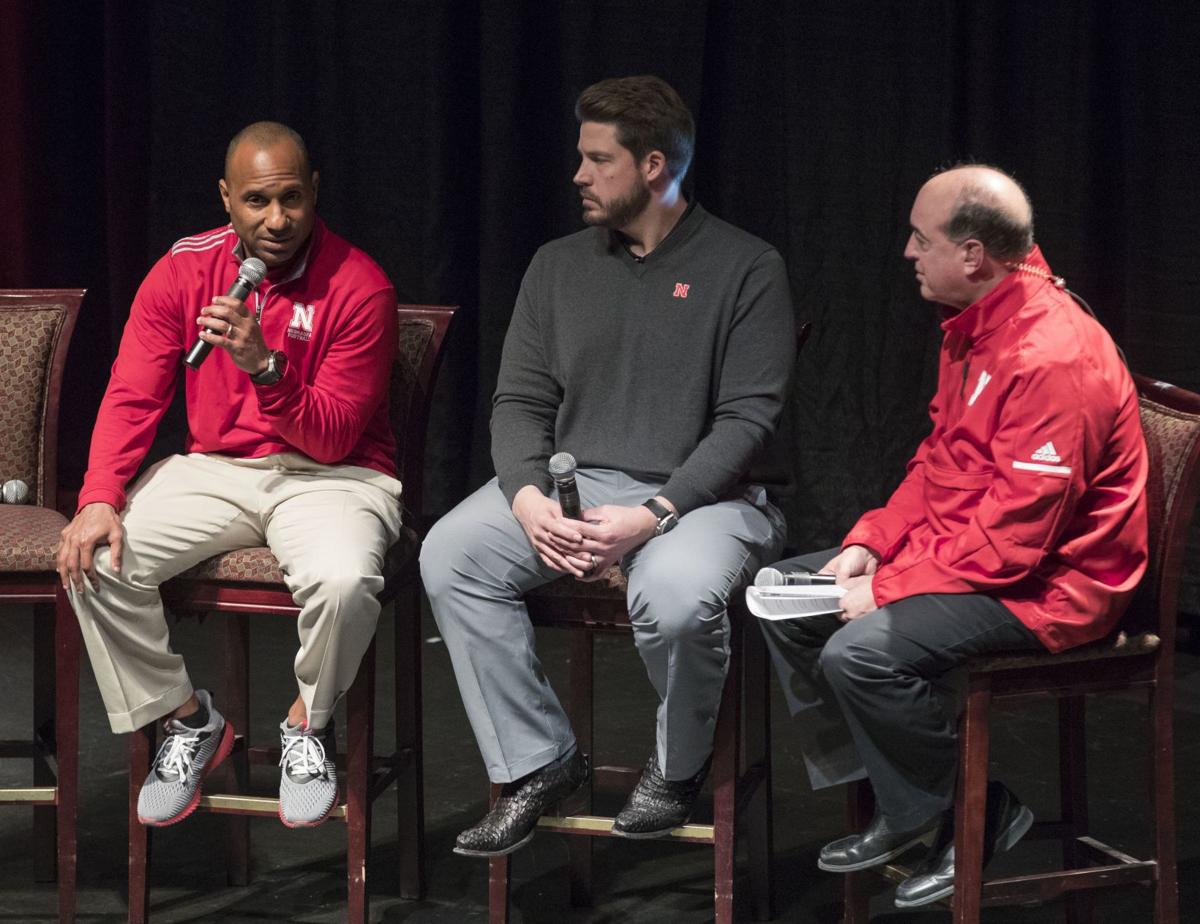 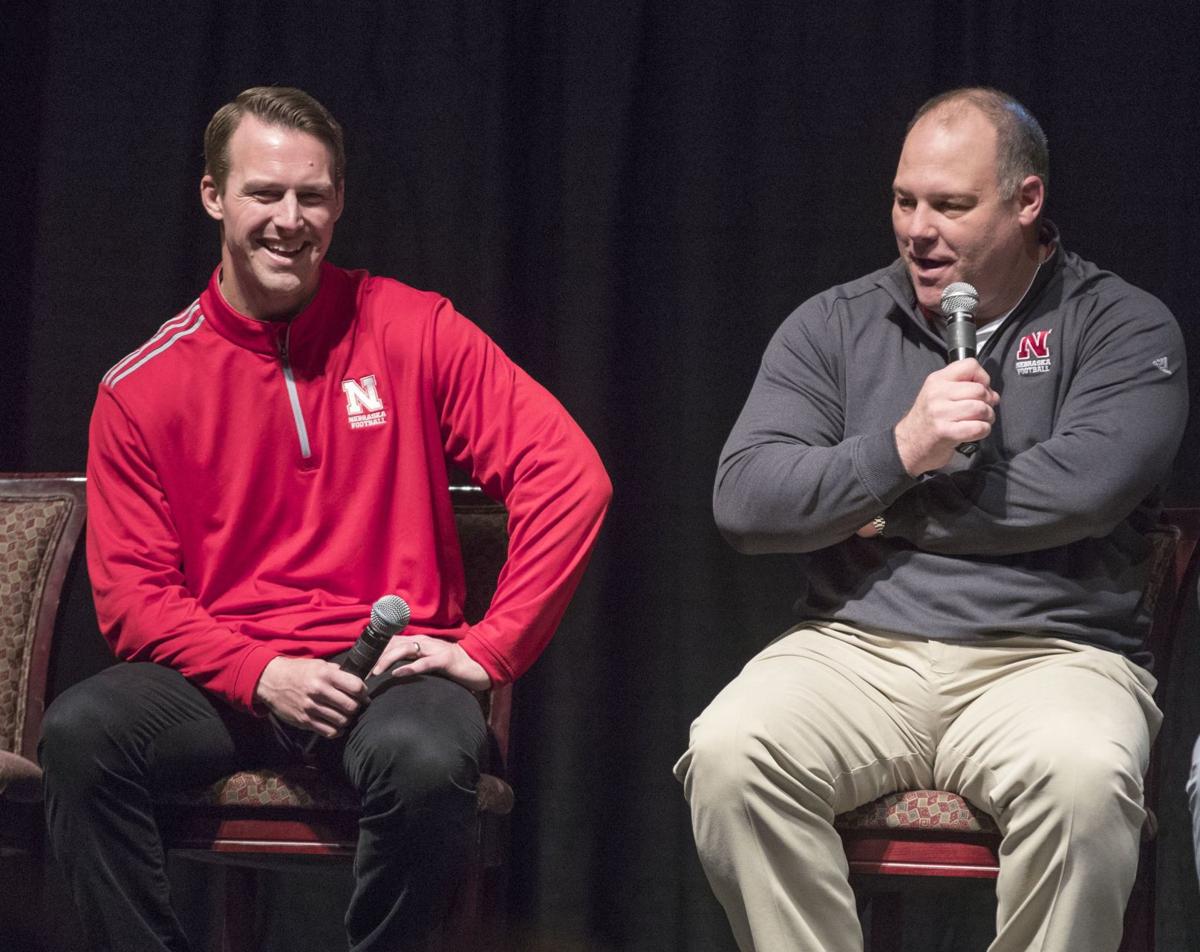 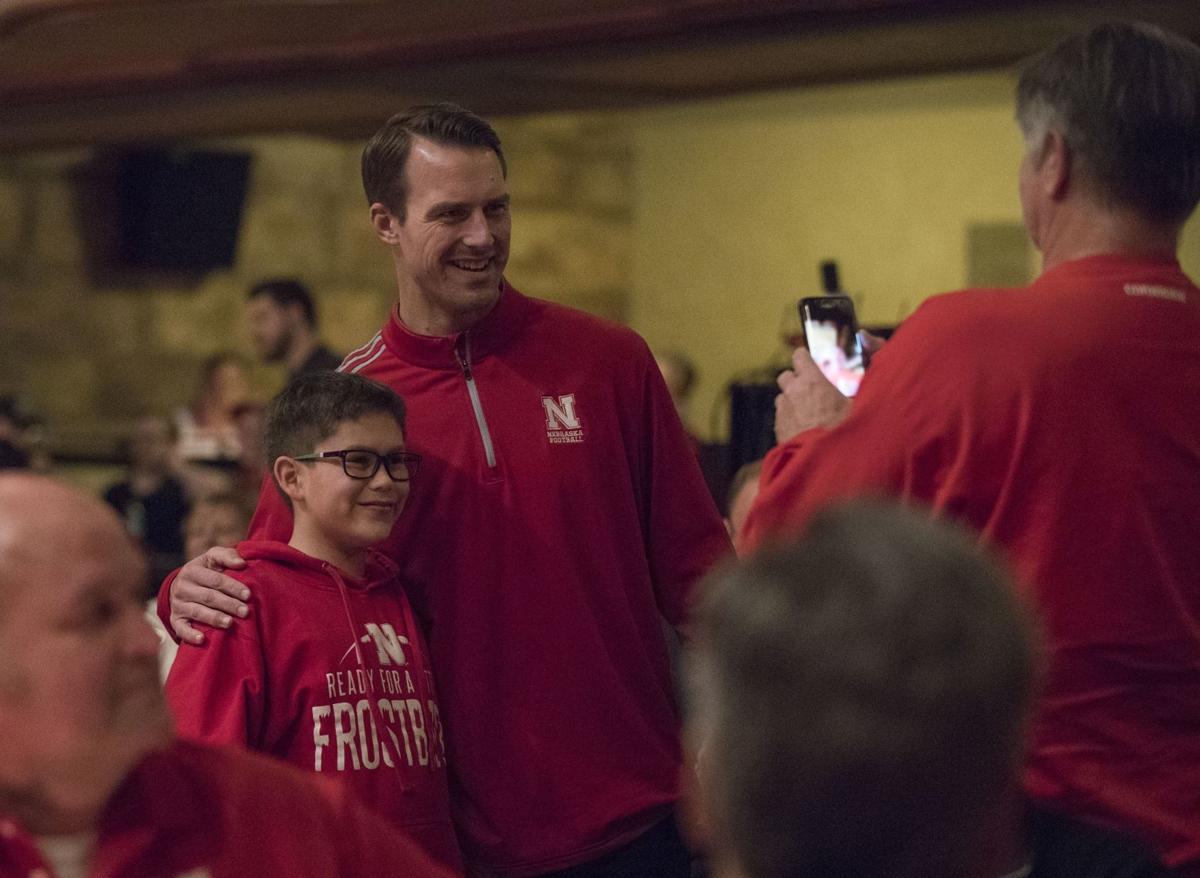 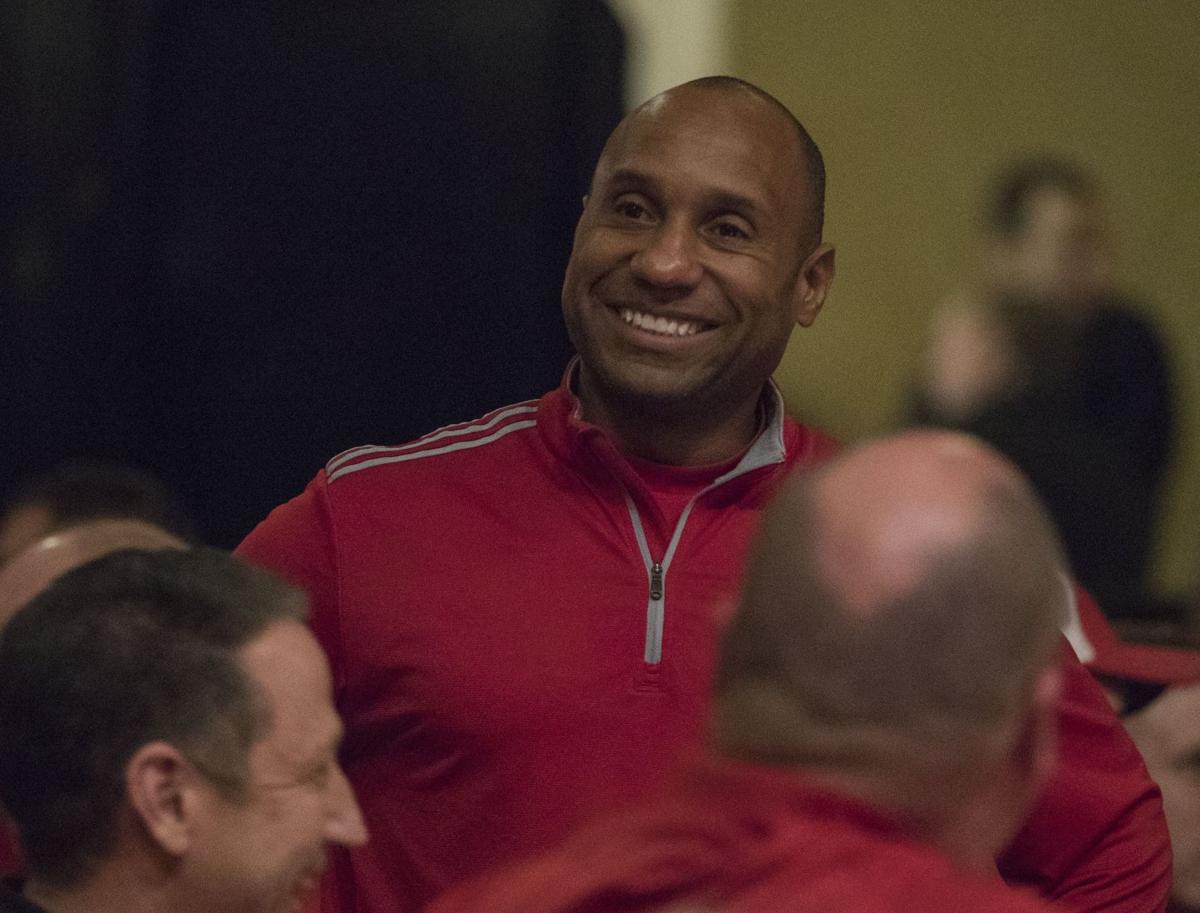 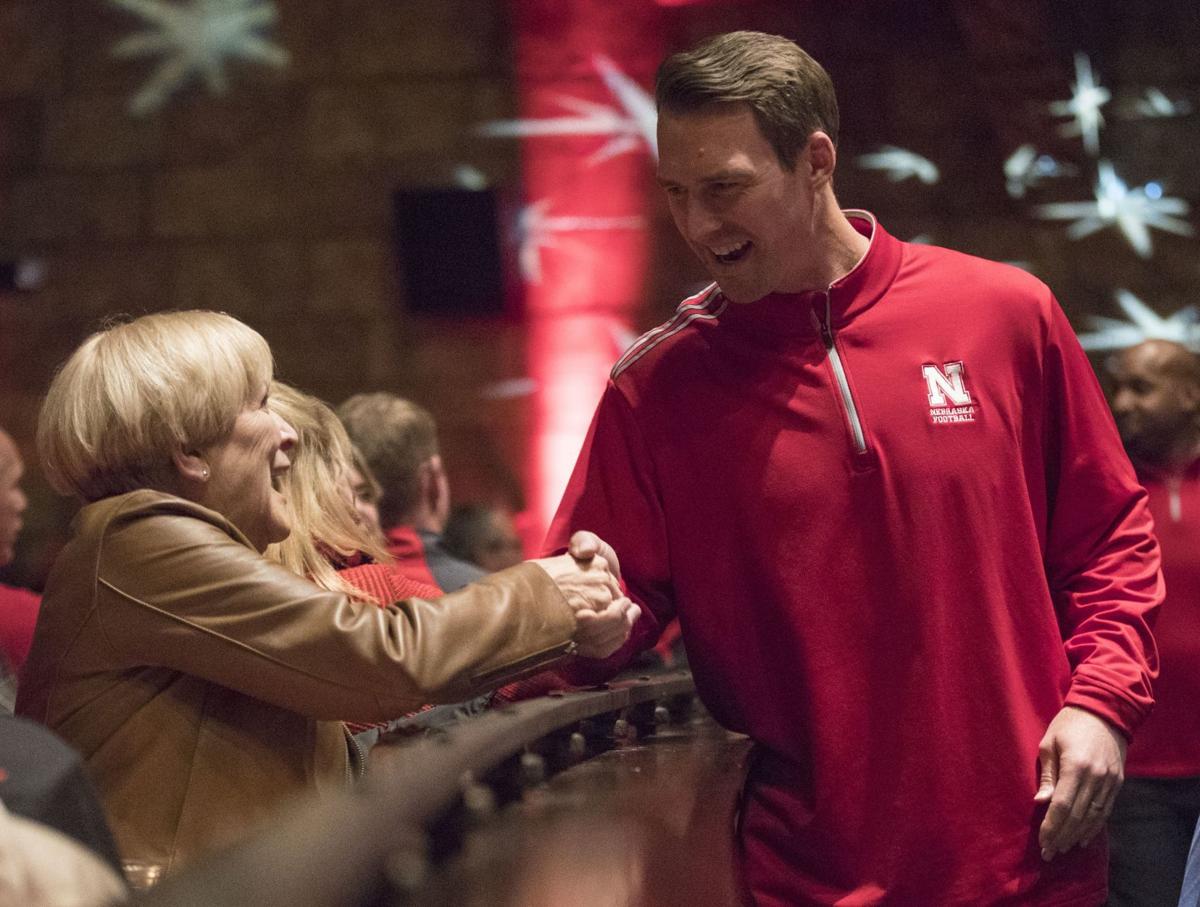 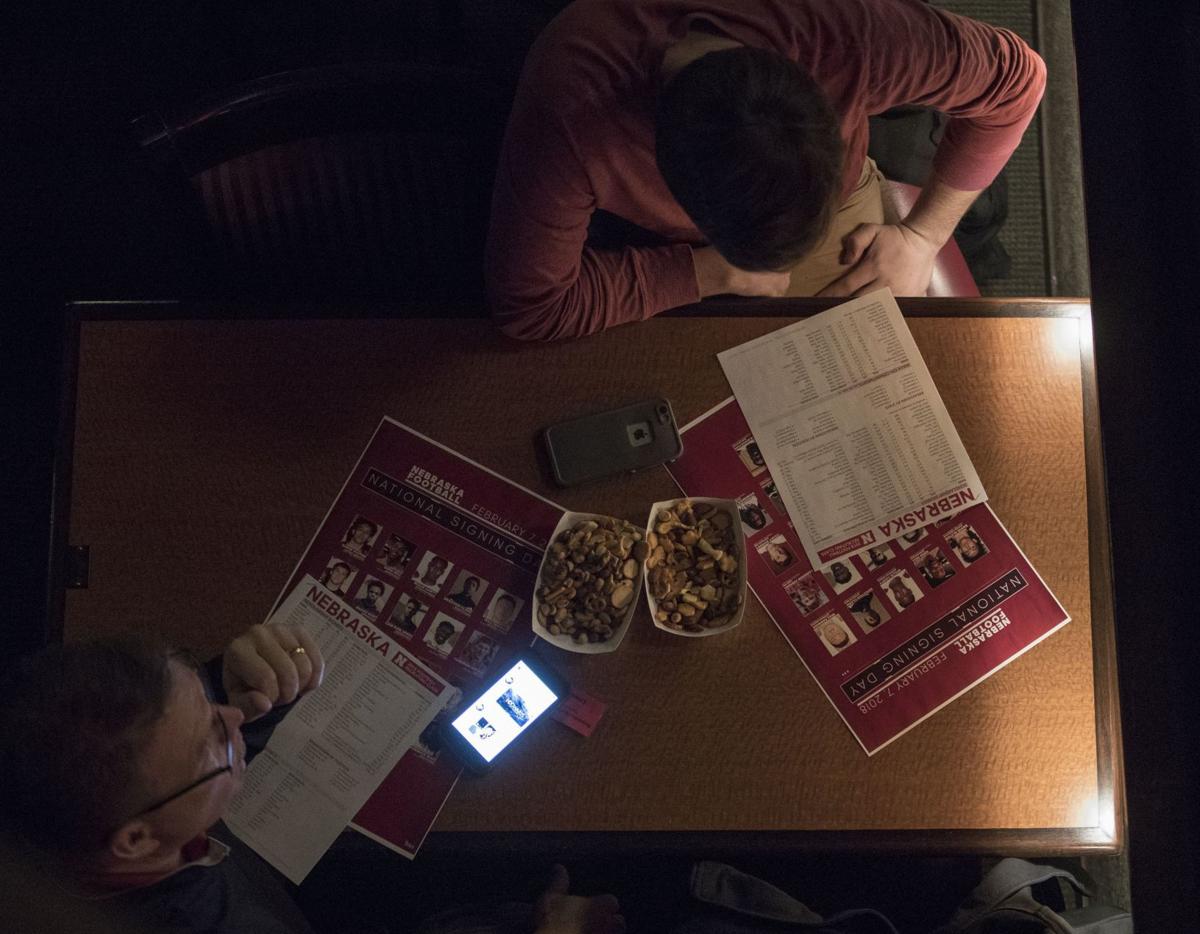 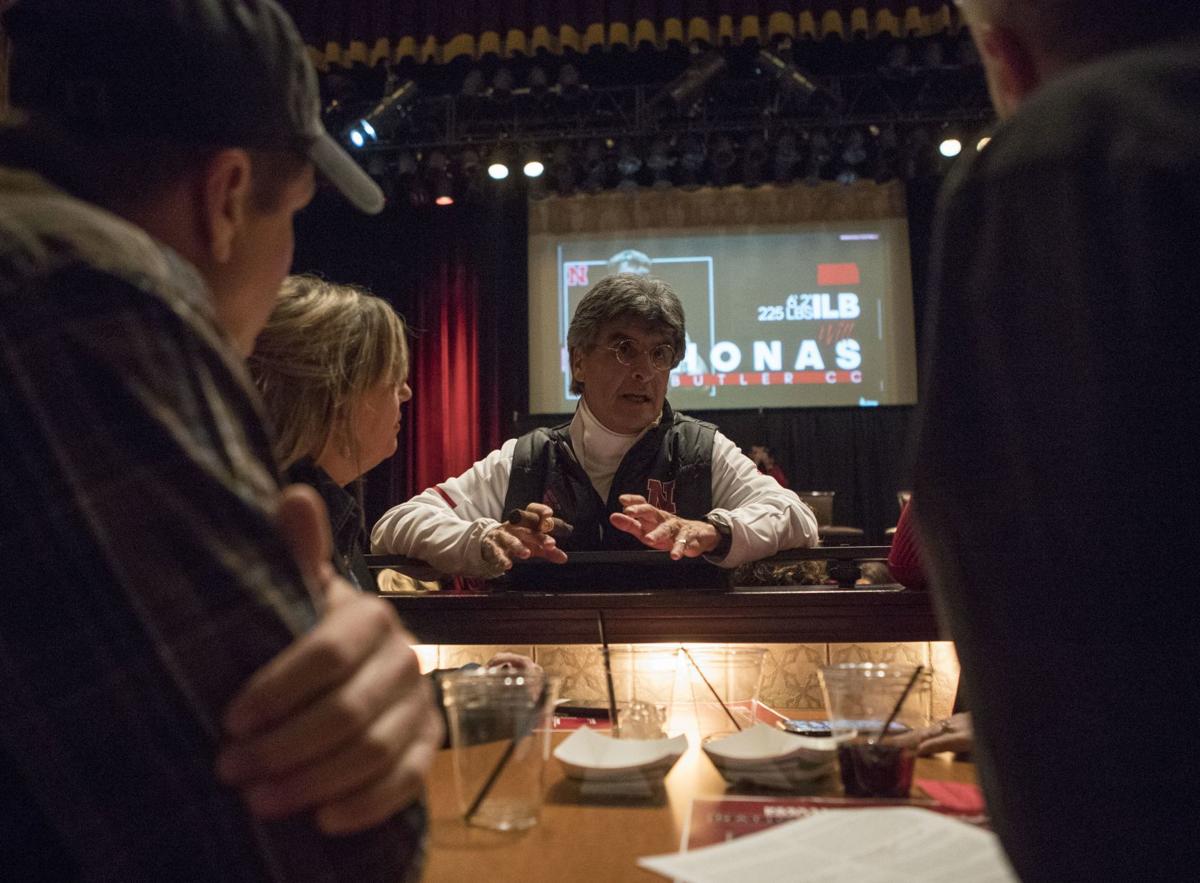 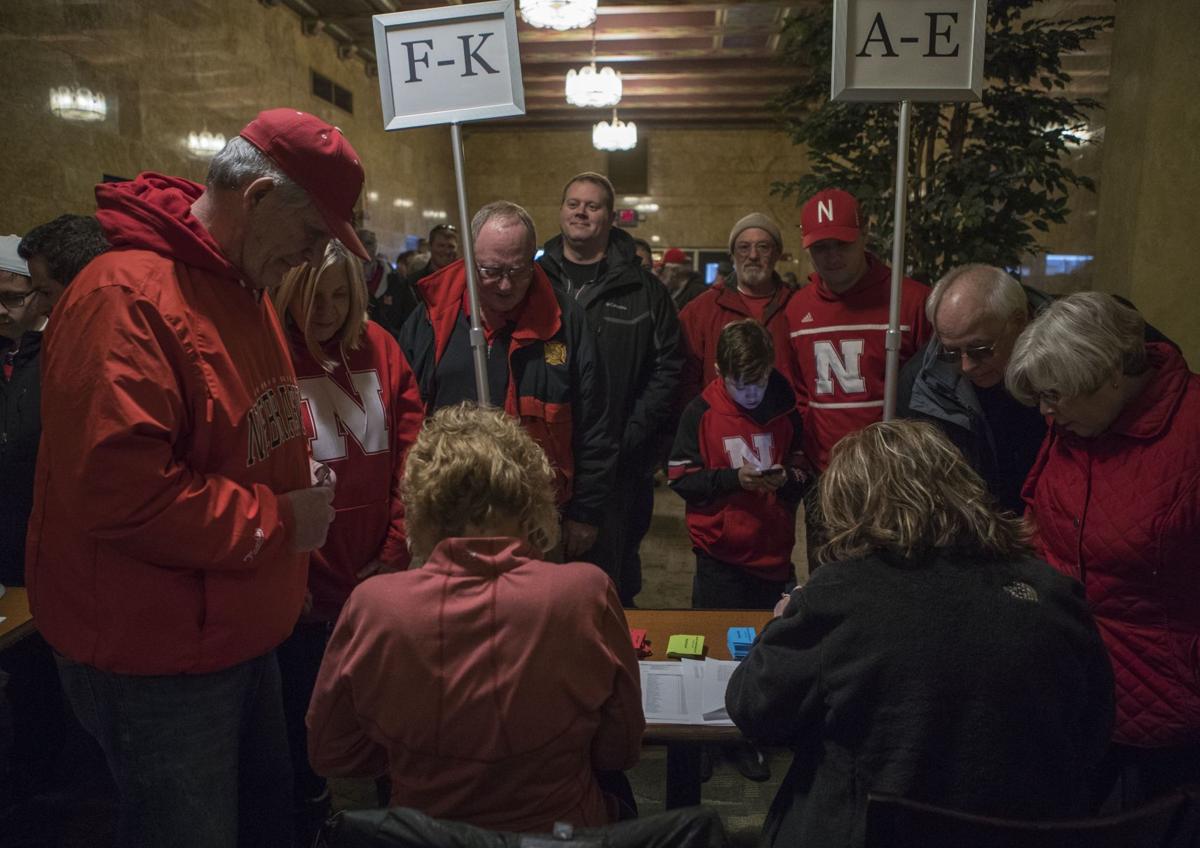 Nebraska fans check in to get their tickets.

Nebraska's offensive coaches enter the stage at the Rococo Theatre to talk to fans about the 2018 football season.

Nebraska assistants Ryan Held, Mario Verduzco, Greg Austin and Troy Walters talk with radio voice Greg Sharpe at a signing day event. Held, the running backs coach, spoke glowingly at a press conference about back Maurice Washington, who signed with NU on Wednesday. “Our fans will love him,” Held said.

Nebraska fans check in to get their tickets.

Video evidence still exists of the only time C.J. Smith really went up against his older brother on a football field. Tre’Quan Smith was the college kid, early in his days as a wide receiver at Central Florida.

Toughness and ability to battle though adversity are two traits that pay off in football and wrestling. Scottsbluff’s Garrett Nelson has both.

"The Bottom Line" host Mike'l Severe sat down with The World-Herald's Sam McKewon, 247Sports' Mike Schaefer and Husker Online's Nate Clouse for a roundtable to discuss all things Husker recruiting.

Carriker Chronicles: What to expect from Scott Frost's Husker offense in 2018

All year round, former Husker and NFL veteran Adam Carriker is taking the pulse of Husker Nation. In Monday's episode, Carriker talks about what to expect Nebraska's offense to look like under coach Scott Frost.

Omaha Burke junior Nick Henrich has heard from some of the blue blood programs in the country.

You don’t tell Chip Kelly no, Dawson said, so he uprooted his life and moved to Philly to spend three transformative seasons with the Philadelphia Eagles. And that job did two things for his career, Dawson said: It brought it back from the dead and set him on a path to Nebraska to join coach Scott Frost’s staff.

Former Huskers can sell their game-used jerseys, and one collector says demand is as high as he's ever seen it

Former college athletes are free to cash in on the fame that comes with collegiate athletics — the key is that they must no longer be eligible to play.

Powell, a redshirt sophomore from McCook, Nebraska, has made the most of his chance, rising from tryout hopeful to solid contributor with hopes of earning All-Big Ten honors this season.

World-Herald correspondent Steve Beideck gives you all the information you need to know about the Huskers' trip to the Big Ten/ACC Challenge this weekend.

Carriker Chronicles: Takeaways from NU being ranked No. 50 in ESPN's Football Power Index

There are certain myths Travis Fisher wants to debunk about recruiting football players in the state of Florida.

A generation of Husker fans understand. Tailgating and gabbing are fine. But once the game starts, it’s time to get serious. But could you imagine a “fan hospitality” area in Memorial Stadium, complete with giant hi-def TVs, leather chairs, refreshments and charging stations?

Carriker Chronicles: What to expect from Erik Chinander's defense in 2018

All year round, former Husker and NFL veteran Adam Carriker is taking the pulse of Husker Nation. In Monday's episode, Carriker breaks down Erik Chinander's defense at UCF and what his Husker defense will look like in 2018.

Each of Nebraska’s last three home games last season — Ohio State, Northwestern and Iowa — had fewer than 70,000 scanned tickets at the gate, according to information provided by Nebraska to The World-Herald.

Recruiting: On Nebraska, Iowa, Wisconsin and the linemen they recruit

In my post-signing day column  and again on "The Bottom Line" recruiting roundtable, I’d mentioned that while Nebraska consistently had higher…

McKewon: In his own unique way, Mario Verduzco knows what he wants from his Husker QBs

Mario Verduzco can talk music, philosophy, faith, science, parenting and, yes, quarterback play. That last topic is one of his life’s passions – a “mission.”

Nebraska fans were 'ready to give up,' Eric Crouch says, but Scott Frost is fixing that

Throughout the course of last season, Eric Crouch came to a disappointing realization about the state of Nebraska football fans — many of them were ready to give up. Ready to stop buying season tickets. Ready to stop showing up at Memorial Stadium. Ready to stop watching altogether. But thanks to Scott Frost, Nebraska's most recent Heisman winner no longer believes that to be the case.

Recruiting: Three quick takes on the commit of Ethan Piper

Nebraska players also had to adjust to some changes under new strength and conditioning coach Zach Duval.