LINCOLN — Terrell Newby wants to jump out of planes. He had a hunger to do that most of his life, actually, hoping to be part of an Army airborne infantry unit on a mission somewhere.

Months before the former Husker running back chose to pursue that career path with the Nebraska National Guard, he was faced with the potential end of his football career. He’d bounced around the NFL. He’d played well in the Alliance of American Football before it folded last spring. He’d finished his degree at UNL in August, and worked out for XFL teams in advance of that league’s draft in October.

Football had been his love forever, but Newby had another passion — the military — handed down by his dad, Terrell Sr., who served in the Army.

“He instilled these Army values in me,” Newby said. “I always wanted to do it, but playing football my whole life was my main focus.”

Newby signed up for the Nebraska National Guard this year. First he told his dad, who went with him to the recruiter’s office. That’s where Newby learned the National Guard could provide the balance he wanted between a civilian life as a real estate developer and a service life in the military. Most importantly, the decision got his dad’s seal of approval.

“We’re excited that he’s joining our team,” Ingalsbe said. “He’s a lot like everybody who is joining the National Guard to serve in a difficult time, when you know you’re going to be called upon to do work in a dangerous time.”

Newby’s military goals are ambitious. He’ll head to Fort Benning, Georgia, in mid-July for 10 weeks of basic training, which is still on amid the coronavirus pandemic. He has 12 more weeks of specific infantry training after that, followed by three weeks of airborne training. He’s also competing for a spot in Ranger School, a 62-day training session also conducted at Fort Benning. Altogether, training could last six months or more.

Some of Newby’s ex-Husker teammates were surprised he headed to the National Guard, but he said all were supportive. The athletic skills Newby used to run for 2,239 career yards and 20 touchdowns can be put to good use in a more important context while fulfilling a lifelong dream as deep as playing football.

“I’ll have the opportunity to jump out of planes,” Newby said. “That definitely attracted me.”

Every Husker selected in the NFL draft since 2000

Which Husker position groups were affected most by losing spring practices?

April is usually a busy month for NFL draft prospects. Former Husker Luke Gifford experienced the process last year before signing with the Dallas Cowboys as an undrafted free agent.

The team was chosen by a 48-member selection committee formed by the Pro Football Hall of Fame.

On Monday's episode, Adam Carriker breaks down Nebraska football's redshirt numbers under Scott Frost, and discusses why it's a positive sign for the program moving forward.

Nebraska's tight ends have been overlooked in Huskers' offense. Sean Beckton expects that to change

Over two seasons, Nebraska's tight ends have caught 62 passes for 700 yards and four touchdowns. The Husker coaches are expecting their production to increase.

Shatel: It's impossible to tell the story of Husker football in five games, but if we tried...

Let’s say you meet a stranger. He or she is new to Nebraska. He or she wants to know the story of Nebraska football, but only has time to watch five games. Which five games would you select?

The Huskers won’t have a chance this spring to address the curiosities that surrounded them for months.

Shatel: Worried about football season? In Nebraska, we're concerned about volleyball, too

Caesars set Nebraska's regular season win total, for now, at 6 1/2 games, which would get NU bowl-eligible.

Nebraska made the cut for one of its top outside linebacker targets in the 2021 class.

A key draft guide projects three Huskers are likely to get selected in the 2020 NFL draft, restarting a Nebraska streak that lasted 54 years before being snapped last year.

Here’s a look at uncommitted quarterbacks in the next two classes who are known to have Nebraska offers and one other notable 2021 prospect who have the Huskers' attention.

Shatel: Tom Osborne spends his time fishing now, but he still has plenty to say on the Huskers

Tom Osborne talks about what old games he’s watching, whether there will be football this fall and the rainy-day nest egg he helped build for NU athletics.

On Friday's episode, Adam Carriker shares his list of 10 games — five wins, five losses — that any fan should watch to gain an appreciation for Husker football.

Huskers add another walk-on kicker to battle for starting job

Novosel made all five of his field-goal attempts and 16 of 16 extra points as a senior.

Parents are happy for more memories, but say Husker players are 'frustrated' without football

Parents are stepping in for their sons, resuming old roles or starting new ones. Chores are being shared again. Grocery bills have gone back up. One mother bought her Husker son his first very own car; a father remade the family’s detached garage into a mini gym.

How does the Big Ten stack up to the SEC? Check out Sam McKewon's mock NFL draft

After coming close last year, the Big Ten could — it probably won’t, but it could — win the first round horserace against the SEC on Thursday night.

Isaiah Simmons, a Clemson star with Omaha roots, is ready for his NFL draft party

Clemson's Isaiah Simmons will likely be one of the first 10 picks in the NFL draft, but the Butkus Award winner also has strong Omaha ties.

The NFL draft starts tonight. Get ready with The World-Herald's complete pre-draft coverage. 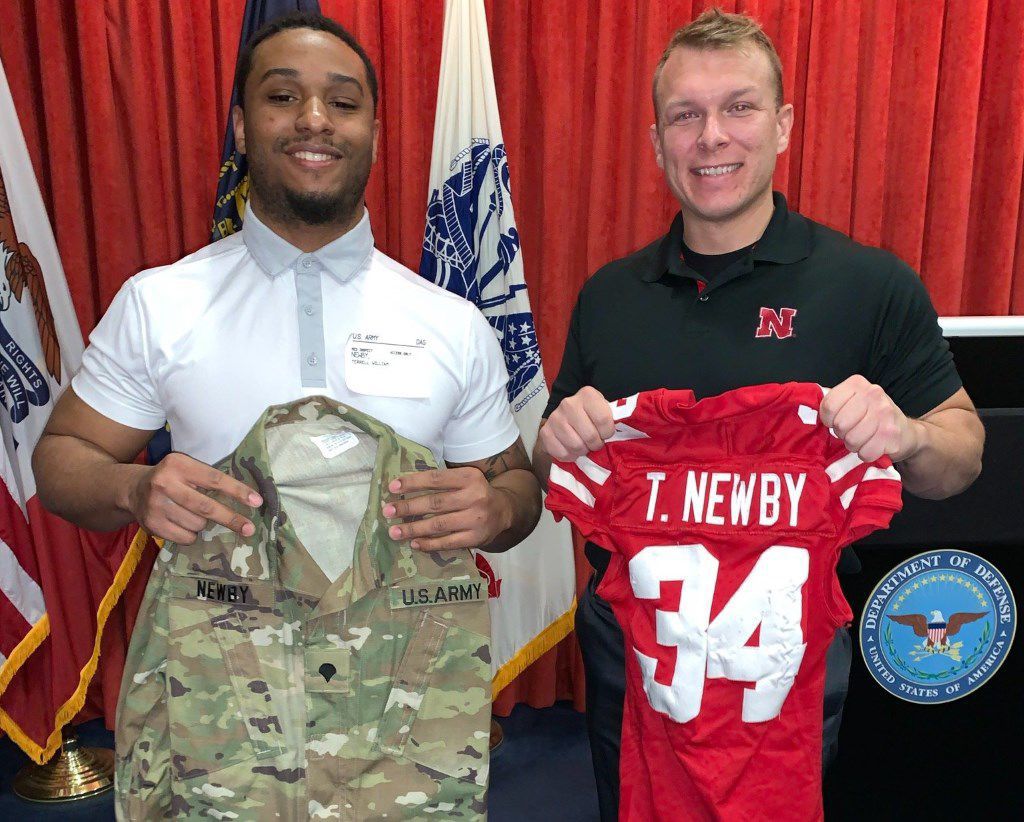 Terrell Newby, pictured with Army recruiter Blake Thompson, joined the Nebraska National Guard to fulfill his dreams of serving in the military. 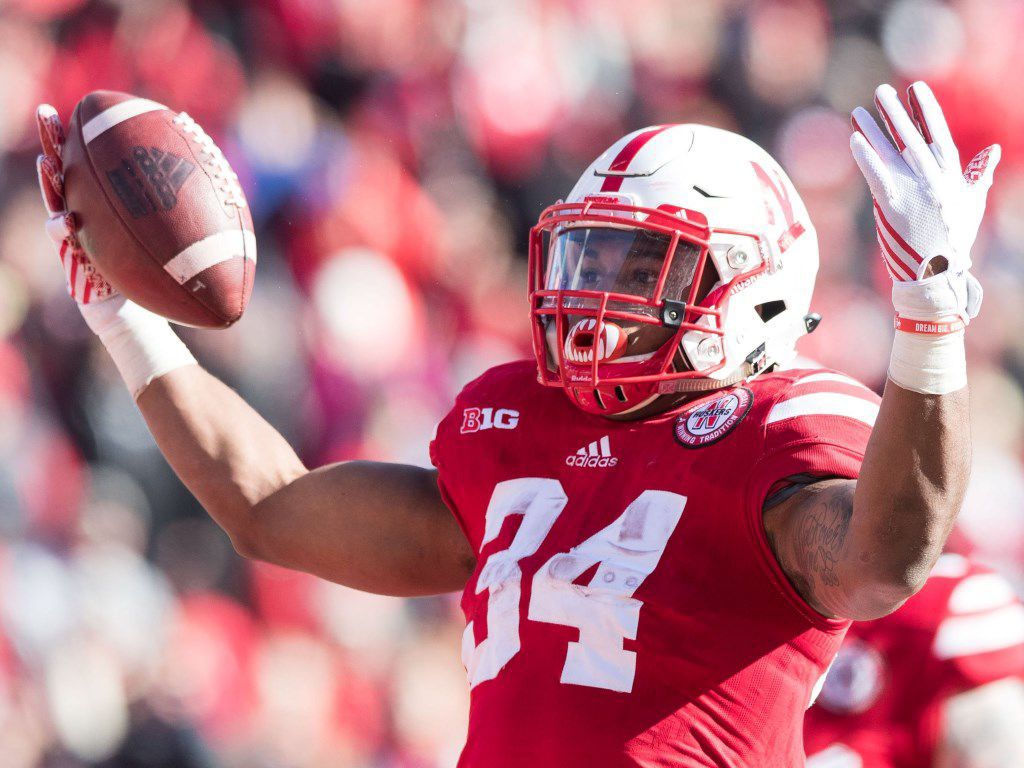 Terrell Newby was Nebraska's top rusher in 2015 and 2016. He finished with more than 2,200 rushing yards and 20 touchdowns in his career.