UNO used a third-period surge Friday night to post its second win of the hockey season.

The Mavericks broke a 1-1 tie on two goals from Jack Randl and one from Taylor Ward to defeat Maine 4-1 at Baxter Arena. UNO moved to 2-1 while the Black Bears dropped their season opener.

"It's a good step for us," Randl said. "We just want to keep building every game and keep getting better."

The Mavs went ahead to stay midway through the final period when Ward scored on the power play. He was camped near the Maine goal and tapped a puck out of midair past goalie Victor Ostman.

"One of his skill sets is that he has unbelievable hand-eye coordination," UNO coach Mike Gabinet said. "That's not the first time I've seen him do that."

UNO goalie Isaiah Saville then made the save of the game, denying a backdoor drive off the stick of Adam Dawe from close range.

"Isaiah's been great," Randl said. "It's not really surprising when he makes saves like that and it gives the bench a huge lift."

Randl made it 3-1 later in the period just seven seconds after a Maine penalty had expired. He took a pass from defenseman Kirby Proctor and ripped a shot past Ostman for his first goal of the season.

Randl then added an empty-net goal with 1:58 left to seal the victory.

"Jack exemplifies what Omaha hockey is about," Gabinet said. "He does everything we ask him to do and more."

The teams fought through a scoreless first period, though UNO appeared to take the lead with 1:08 left. Brannon McManus broke in and fired a shot that beat Ostman high to the glove side.

The Black Bears challenged that the play was offside and were rewarded when the replay verified it. It would have been the second goal of the season for McManus, a graduate transfer from Minnesota.

The Mavs held a 14-6 edge in shots in the opening period.

UNO took the lead early in the second period when freshman Cameron Berg scored his first collegiate goal. He picked up a loose puck at center ice and zipped a shot past Ostman.

"That was pretty exciting," Berg said. "I yelled for the puck and took the shot and got lucky that it went in."

The Black Bears tied it with 7:29 left in the period. Dawe found teammate Ben Poisson stationed near the UNO net and he deflected the puck into the net.

Saville made 22 saves to post his second win of the season.

The teams will play again Saturday at 7:07 p.m. at Baxter Arena.

A brief look at UNO hockey since 2010

UNO hockey ready for 'another tough test' against Maine

UNO hockey continues its 10-game homestand this weekend with a two-game series against Maine. The No. 17 Mavericks are 1-1 after splitting a season-opening series against Lake Superior State.

UNO goalie Isaiah Saville shouldered the blame for the season-opening loss, then bounced back Sunday by stopping 24 shots to earn the shutout.

UNO volleyball dropped the first set Saturday, but won the next three to defeat North Dakota State and move to 6-0 in Summit League play.

Naz Astwood's first career goal for the Mavs gave the UNO men's soccer team a 2-1 win over Eastern Illinois on Saturday. The Mavs are now 2-0 in the Summit League.

Matt Miller scored a tie-breaking shorthanded goal Saturday to help lift UNO hockey to a win over Maine. The victory boosted the Mavs to 3-1 this season.

UNO hockey moves up in rankings after weekend sweep

After sweeping Maine over the weekend, UNO moved up in the latest college hockey rankings.

Freshman Cameron Berg won the faceoff in overtime and Matt Miller did the rest. The sophomore forward scored an overtime goal to lift UNO hockey to a win over Alaska Fairbanks. 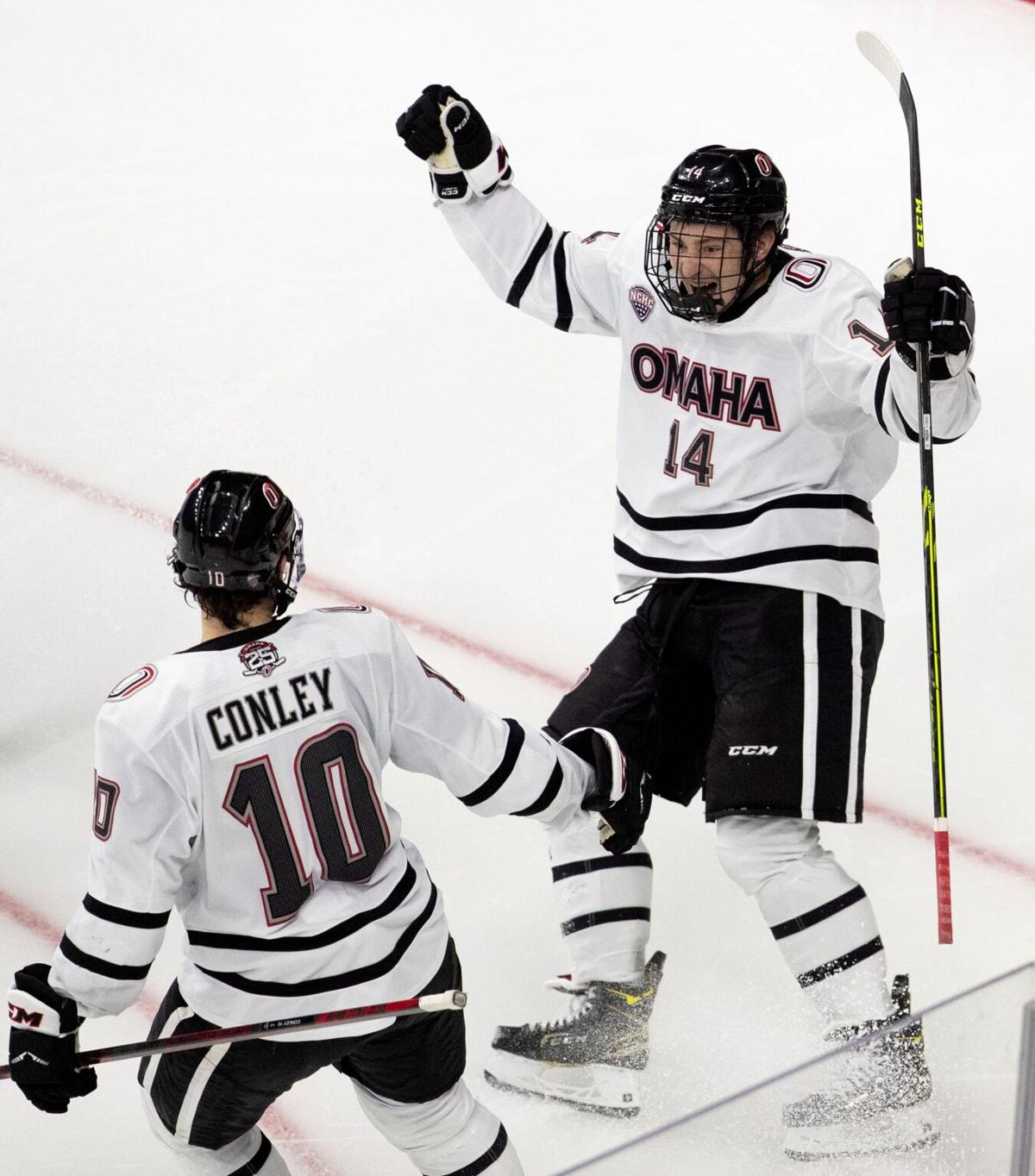 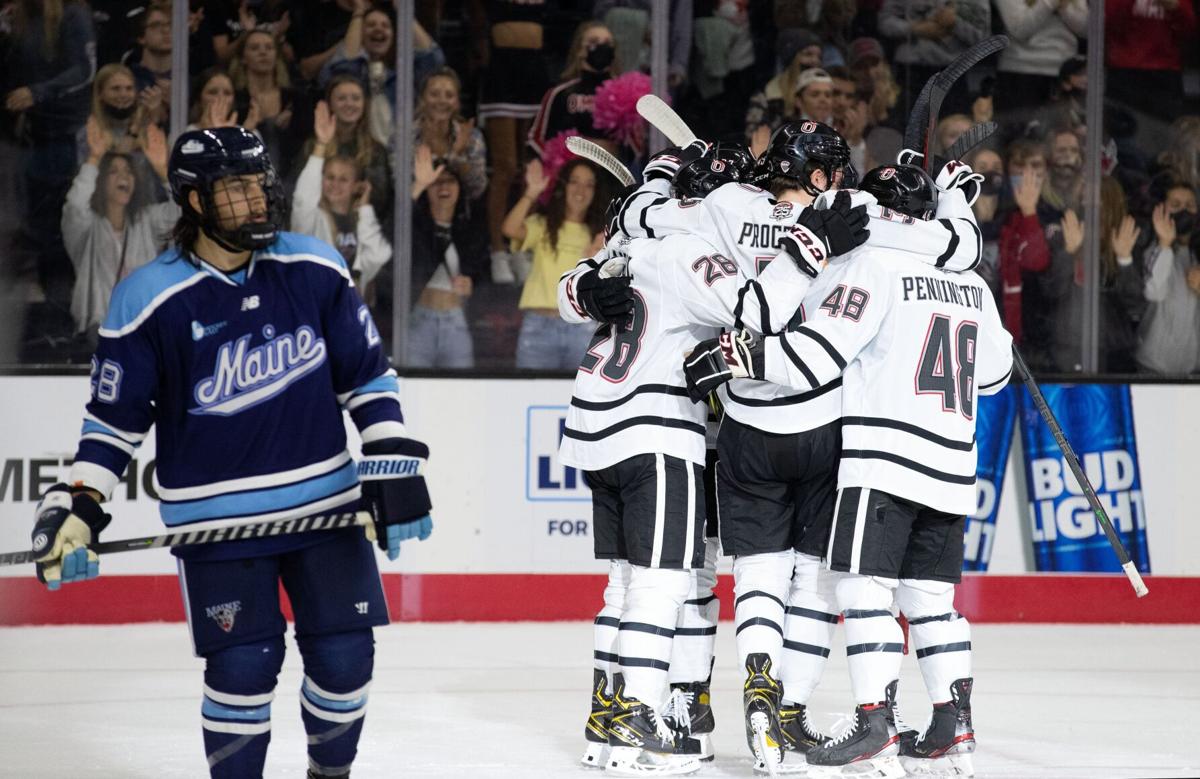 UNO players celebrate Jack Randl's goal in the third period of their game against Maine. 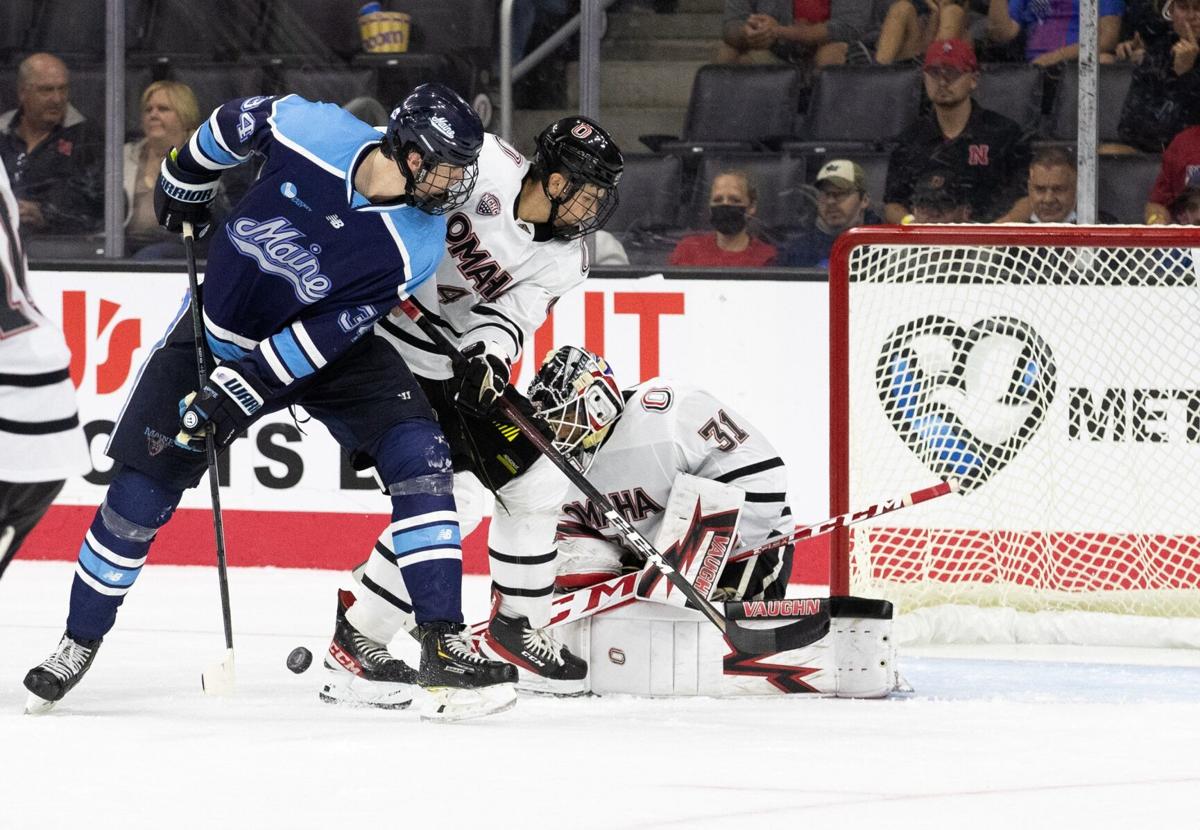 Maine's Keenan Suthers and UNO's Brandon Scanlin battle for the puck in front of goalie Isaiah Saville in the third period.