Omaha golfer Roger Miller has finally pulled ahead of his wife.

But his 7-6 lead in holes in one might not last long.

When he made No. 6 last December at the Anthem Golf and Country Club in Phoenix, wife Tina evened the score with an ace there two weeks later.

“For most of our marriage I’ve been trailing her,” Roger Miller said. “I've had the lead twice."

Miller sank his latest earlier this month at the Pines Country Club in Valley. He used an 8-iron to go 142 yards on the seventh hole.

Tina was a witness as well as friends Tom and Diane Byrnes.

“She just smiled,” Roger Miller said. “The Byrnes had never seen a hole in one before, so they got excited. There was a lot of yelling.”

He has always loved to golf, and Tina jokes that in order to see her husband after they were married 50 years ago, she had to start, too. They golf several times a week. Roger has a 3 handicap and Tina a 20.

Although it takes some skill to hit the first shot onto the green, Roger says the rest is luck when it comes to an ace.

They enjoy their hole in one competition, too. Although Roger likes to point out that he’s only seen Tina make one of her aces. The same goes for Tina.

She, however, is the only one to have an albatross, which is a hole in one on a par-4. He bought her a membership in the albatross club after that accomplishment.

She has cautioned Roger not to enjoy his lead for long.

“She’s pretty competitive, and claims it’s only a matter of time,” he said. “Bold talk.”

How low will they go at the Nebraska girls state golf tournament?

Emily Krzyzanowski of Gering shot a 1-under 71 to win the District B-4 tournament in Sidney.

Kate Strickland and Neely Adler shot in the 60s on Monday as Lincoln Southwest broke the state scoring record in girls golf in the District A-2 tournament at Awarii Dunes near Kearney. 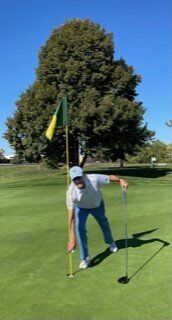 “For most of our marriage I’ve been trailing her,” Roger Miller said. “I've had the lead twice." 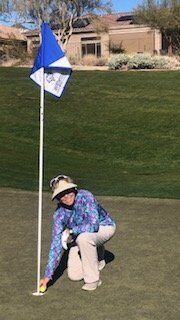 Tina Miller has hit six holes in one.