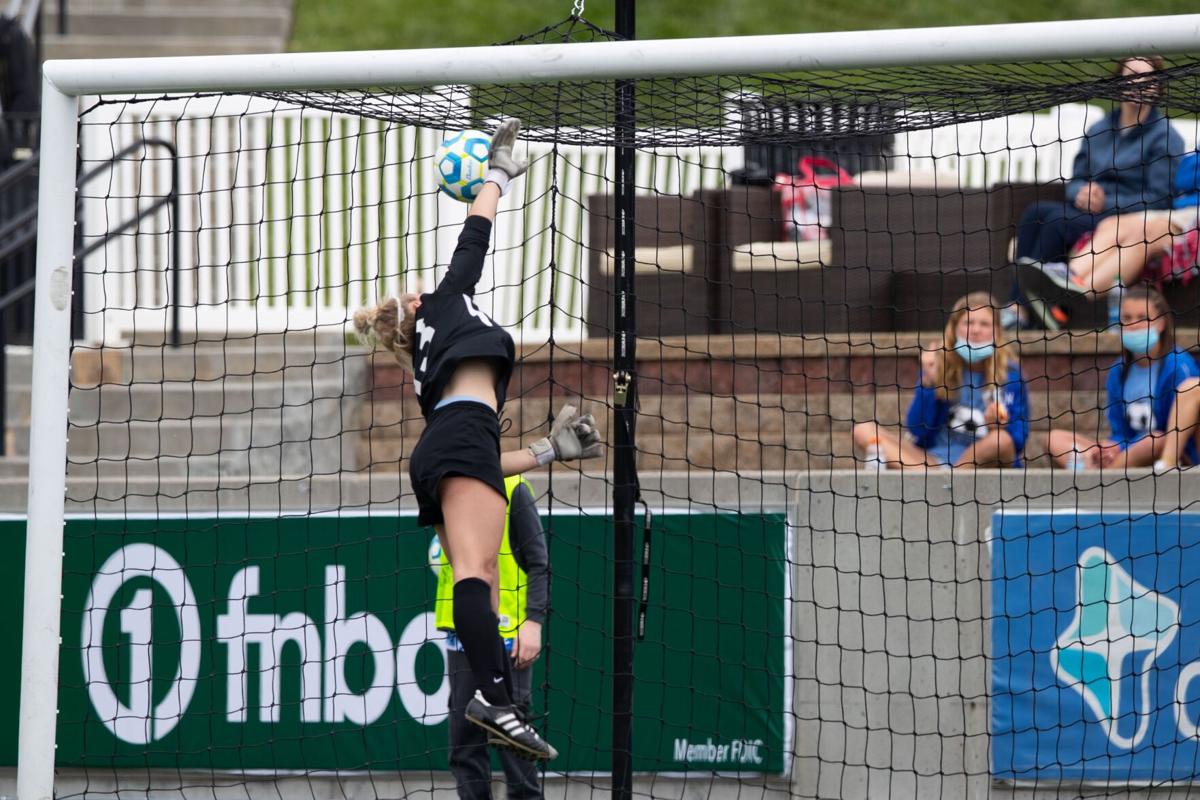 Gretna's Rainna Daharsh attempts to block a Lincoln East goal during a Class A girls' soccer game on Saturday. 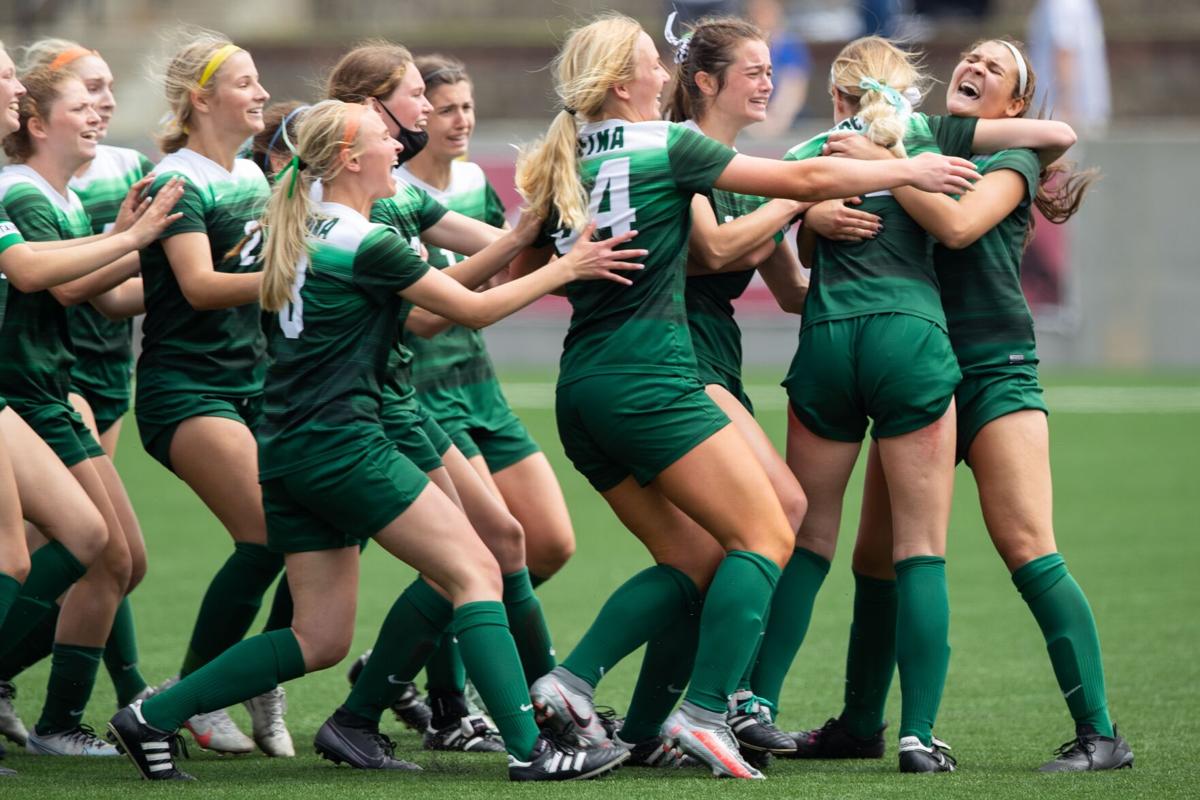 Gretna celebrates after defeating Lincoln East in a shootout during a Class A girls' soccer game on Saturday.

The top team in the state survived and advanced Saturday morning.

Class A No. 1 Gretna won a sudden death shootout, outlasting third-ranked Lincoln East 2-1 in the semifinals of the girls state soccer tournament at Morrison Stadium.

It puts the Dragons into Tuesday’s 5 p.m. state championship match, their first in two seasons of Class A play.

“I'm ecstatic for them,” Gretna coach Digger Hawkins said. “They've been through so much.”

After no team hung within two goals of Gretna through its first 18 matches, it was the second time in three outings that Hawkins and company were taken to the limit.

Even he had to admit afterward that nightmarish replays of a district championship shootout loss to Millard North crept in after star forward Sarah Weber missed in the opening round of kicks Saturday.

But the Dragons made the rest of their attempts and got some help from the right post in the seventh round to win the penalties 6-5.

“It was a game that Sarah had a lot of chances and it just didn't sort of go her way,” Hawkins said. “But we talked about other players stepping up.”

Savannah Defini, Sydney Zabloudil, London Defini, Sarah Turpen and Malorie Maderak made the next five Gretna tries, with a Rainna Daharsh save mixed in to level things going to the seventh round.

When East’s Ashley Bredthauer hit the frame on her try, it set up senior defender Taylor Daffer to seal the deal. Daffer went low and left past Spartan keeper Summer Wolfe to send the Dragons to the title match.

Hawkins said he always asks who wants to take a kick before the shootout begins, and in the district final loss he saw no hands go up. On Saturday, he said, there were plenty of takers, including Daffer, who missed her try two weeks ago.

“I always want to go in confident that I'm going to make it, but obviously I do want to take one,” she said. “I have confidence in myself to take one.”

A fast Gretna start included a shot just 15 seconds in and an Ava Makovicka goal in the second minute. The sophomore midfielder got her head on a corner from Chaley French for her ninth of the year and an early Dragons advantage.

“I challenged certain players to score goals, and Ava was one of them,” Hawkins said. “Ava is another competitive player, and she's one that is willing to put her head in the way.”

The lead lasted most of the first half until East senior Haley Peterson leveled things with a free kick from distance in the 34th minute. The Nebraska recruit’s strike from about 35 yards out found the back side of the goal for her 15th of the season and third of the state tournament.

“I've said this over and over again, this team knows how to respond,” East coach Emily Mathews said. “They know how to face challenges and adversities in a game and they continue to rise above. They always have figured out a way to come back and meet that score line, and I just can't ask any more out of them.”

Both teams rattled the woodwork with shots twice after halftime, but neither could find a go-ahead score before the shootout. The teams combined for 41 shots (26 for Gretna) and 15 corners in an entertaining match.

Hawkins credited his defense with the way it managed against an East offense that lit the scoreboard six times in an opening-round win.

“Honestly felt they were brilliant,” Hawkins said. “I thought they were brilliant. And they did exactly what we asked them. They sort of just lost a little bit of their composure after the goal. I felt like we executed our game plan pretty well apart from scoring board goals in regulation.”

The Nebraska high school state soccer tournament continues Saturday with the Class A boys and girls semifinal matches. Join us as we provide complete coverage from Morrison Stadium.

Sena Ahovissi scored both goals, including the game-winner in the second half, to lead Class A No. 5 Millard North to a win over fourth-ranked Omaha Marian in the semifinals of the girls state soccer tournament.

Take a look at the results from Saturday's action at the Nebraska high school state soccer and baseball tournaments.

The Nebraska high school state soccer tournament continues Monday with the Class B boys and girls semifinal matches. Join us as we provide complete coverage from Morrison Stadium.

No. 1 Gretna and No. 5 Millard North will take the field at 5 p.m. Tuesday for the championship match at the Nebraska state soccer tournament. Here is everything you need to know.

Gretna's Rainna Daharsh attempts to block a Lincoln East goal during a Class A girls' soccer game on Saturday.

Gretna celebrates after defeating Lincoln East in a shootout during a Class A girls' soccer game on Saturday.