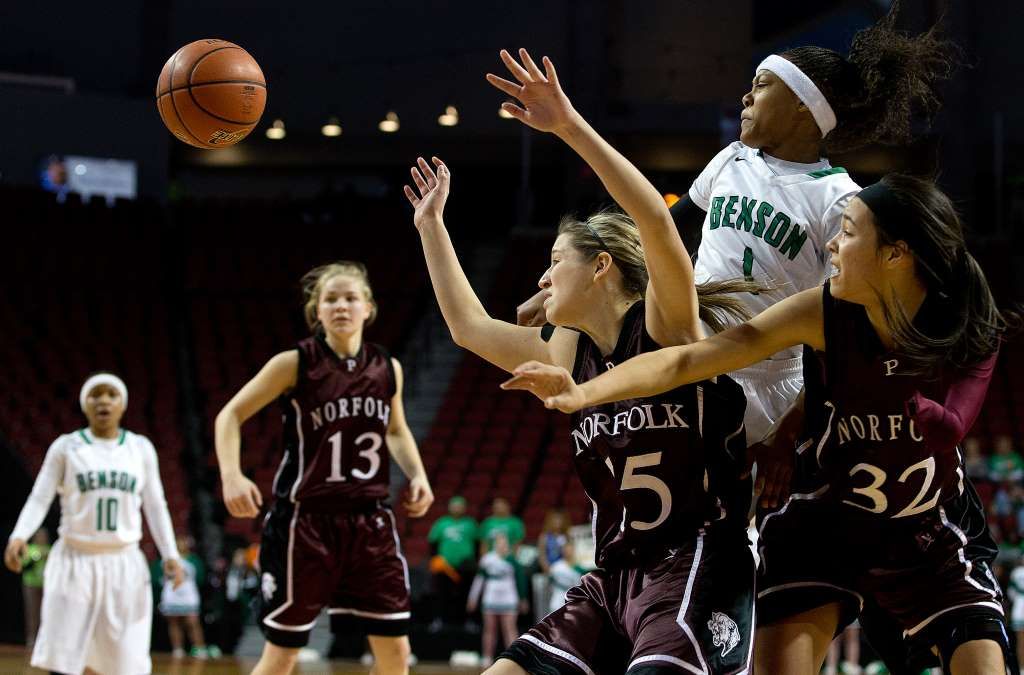 Norfolk's Erika Medel, No. 15, and TaLeah Williams fight for a rebound with Omaha Benson's De'Ayra Davis on Thursday. 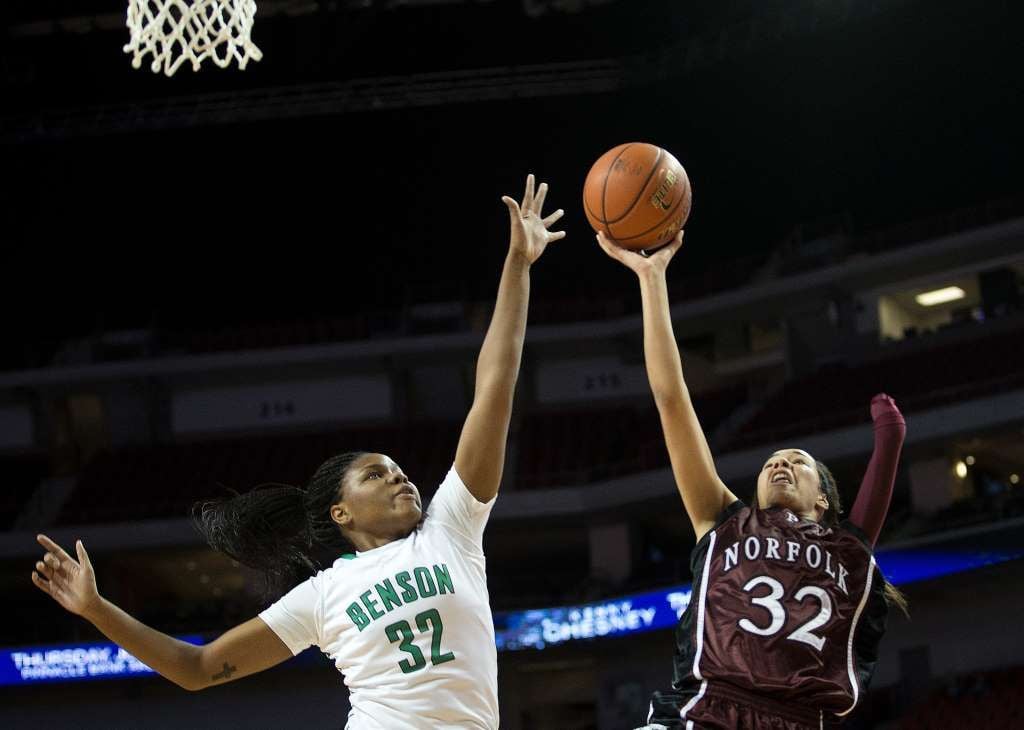 In a monumental first-round upset Thursday, the eighth-seeded Panthers ousted Omaha Benson — the defending state champion on a 45-game winning streak — from the Class A girls tournament.

Bradley’s 20 free throws in the 46-37 victory at Pinnacle Bank Arena were an all-class tournament record and the South Dakota recruit’s 34 points tied the Class A mark.

In its first tournament appearance in 15 years, Norfolk (14-12) advanced to Friday’s 7 p.m. semifinal against Bellevue West.

Asked how many people gave Norfolk a chance of winning, Bradley said: “Probably not too many. All that matters is we gave ourselves a chance.”

Veteran tournament observers couldn’t remember another time that an undefeated Class A team lost in the first round.

Top-ranked Benson (26-1) led for 65 seconds, coming in the final quarter. After Arbrieal Benson’s basket staked the Bunnies to a 35-32 lead with 2:59 left, Bradley made the next four points from the line and Jenna Jochum had two more.

The Bunnies never drew closer than two while going 2 of 5 at the line and getting outscored 8-2 in the final 2:03.

“Our shooting was off and they kept packing and packing it in against Simone (Goods),” Benson co-coach Bob Woodworth said. “They had a great game plan and Bradley hit everything she put up.

“We didn’t play our normal defense, but they had a lot to do with that. They run a nice set offense. And once we got behind, for the first time we panicked a little bit because we usually shoot our way back into it and we didn’t.”

Norfolk’s 2-3 zone was effective in forcing the Bunnies out to the perimeter and many one-and-done possessions.

“Our girls played with a lot of discipline,” first-year Panthers coach Jared Oswald said. “Benson’s strength is attacking the paint and we wanted to take that away from them.

Bradley had eight of Norfolk’s 10 points in the first quarter, six of eight in the second, six of 12 in the third and 14 of 16 in the fourth. She tied the Class A scoring record set in 1988 by Benson’s Donna Curry.

“Jaycee does such a good job handling the ball that the (defensive) pressure never seems to bother us,” Oswald said. “She was able to take it one-on-one and that was huge getting us into our offense.”

“We tried a lot of different things. We couldn’t get her stopped,” Woodworth said. “Late in the game she kept having the ball and we kept putting her on the free-throw line.

“It was a combination of a lot of different things. They were getting to every loose ball, rebound, a lot of things that let them win the ballgame. So hats off to them. They did a good job.”

» Jaycee Bradley’s 20 free throws are an all-class state tournament record. Bradley, pictured at left while she was fouled by Benson’s Simone Goods during Thursday’s fourth quarter, finished with 34 points to tie the Class A mark. Bradley was 20 of 24 at the foul line.

» The Bunnies had won 45 straight. Goods led Benson with 13 points.

Did that just happen? Norfolk, known mostly for its boys basketball team this season, also has a pretty good girls team. Top-ranked Omaha Benson found that out the hard way Thursday in the first round of the state tournament.

Get live updates from the Nebraska girls high school basketball tournament Thursday through Saturday in Lincoln.

Get live updates from the Nebraska boys high school basketball tournament Thursday through Saturday in Lincoln.

Norfolk's Erika Medel, No. 15, and TaLeah Williams fight for a rebound with Omaha Benson's De'Ayra Davis on Thursday.