The players weren’t thrown under the bus.

And what a ride it became for Columbus Lakeview and their head football coach, Kurt Frenzen.

Last September, Lakeview was at the same juncture it had been a year earlier — a 1-2 start to the year when expectations internally and externally had been high.

But these Vikings hadn’t lost as many players to injuries as in 2020, when they limped in with a 4-5 season. They had short memories. So did their coaches.

And they won their final 10 games, beating nemesis Pierce 37-25 in a payback state final, for the school’s first state football title.

After 21 years at Lakeview, being hired as a 26-year-old and getting through a make-or-break season in Year 4, Frenzen is the 72nd World-Herald Nebraska boys coach of the year. He is the first honored from Lakeview.

“It is such a great honor, and a bit surreal, to be honest with you, to be named coach of the year," he said. “To look through the list of past award winners is very humbling to say the least. To be on this list is something that I will forever cherish and reflect upon with great appreciation.”

Frenzen recalled what happened in the wake of the 30-17 home loss to Wayne that followed a 28-27 loss at Pierce. The normal Sunday coaches meeting, he said, “was pretty intense.”

“We felt like we had the athletes and the football team to be really successful. We just didn’t feel like our coaching staff was maybe holding some of our kids to a high enough standard or maybe the accountability piece that needed to be in play," he said. “I couldn’t be more proud of our group of coaches. They never threw our kids under the bus one time.”

A week of “great” practices followed the meeting. He said it was reemphasized that playing with high-end effort all the time was the key to playing time, and “I think that really brought out a great effort by our kids for the rest of the season.”

“We felt like we had kids that could make a deep run. We just as a coaching staff, quite honestly, we let some things slide in that Wayne game that needed to be addressed during the course of the game," he said. “Our coaches did a tremendous job zeroing in on that the rest of the year, game by game and really breaking it down game by game. They did a great job of getting tunnel vision. That obviously ran downhill to the kids and the kids did the same exact thing. I thought they had really great focus for the rest of the season.”

It came as no surprise to one of his mentors, Walt Olsen, who in 1997 hired the Midland University graduate for his staff at Hastings High School.

“Kurt is a professional," Olsen said. “When they have the state playoffs in Lincoln and the coaches’ clinic, all the coaches I know that I’ve ever introduced Kurt to, they all say, ‘Wow, this guy,’ and they become friends with Kurt. He’s just one of the good guys.

“He’s been a guy who’s stuck by Columbus Lakeview, and that program up there is awesome. Coaches who play him know about it, but other people don’t know about it. It’s a great program.”

Frenzen, 48, is the youngest of five brothers who grew up on a farm near Fullerton. By 12, he knew he wanted to be a football coach. His dad, Marlin, helped coach Fullerton’s youth baseball teams.

“Dad lost his battle with cancer almost 30 years to the day that I found out I was going to be named your coach of the year," Frenzen said.

At Fullerton, Frenzen played football and basketball and ran track. He was on the Warriors’ first team to qualify for the state playoffs, when he was a junior in 1990, and they made it to the semifinals. He was named to the Class C-2 all-state defensive line.

At Midland, he was on the last Warriors team (1994) to qualify for the NAIA playoffs. His coaches were Steve Schneider and Doug Lanik, but their mentor, the late Don Watchorn, was still around and was the one who recommended Frenzen to Walt Olsen.

Frenzen’s most important connection at Midland was meeting his future wife, Kelly, in 1996. They were married in 2000 and they have three daughters, Makenna (20) and 17-year-old twins Molly and Haley.

“Being a coach’s wife is a very tough life. It’s never been easy," he said. “I started coaching at Midland when my playing eligibility was done. We met that year, and even our very first official date was cut short. We had to miss the end of the movie we were seeing because I had to go to a Midland football team meeting.

“That probably could have been it right there, but she stuck with me.”

He was at Hastings for four years. The Frenzens had bought and remodeled a house in town, only to move the next year to Columbus. He interviewed with Doug Moss, the late athletic director at Lakeview. Olsen knew Moss and assuaged him that although Frenzen was 26, he was ready to lead a football program.

After three years, the jury was out. Frenzen’s first three teams went 4-5, 1-7 and 3-5. Time for Moss to confront his young coach. Over a beer one night in the offseason, the jovial talk got serious.

“He’s like, ‘Listen, you got to figure something out. Got to get it done this year, kind of almost half joking,"’ Frenzen said. “I didn’t know and I kind of laughed and he looked at me serious, kind of leaned in across the table.

“He goes, ‘No, I’m serious. We got to figure some things out Year 4. We have to make some strides here. I was just going to be completely honest with you. This isn’t coming from anybody but me. There’s no pressure on me, but I hired you to get a job down here, and it’s time to get some things going.’

“It woke me up a little bit. Thank God Year 4 we got it going a little bit, and the rest is history. I miss him. Doug was a big part of my life, and I loved being his football coach. It was definitely awesome.”

This past season, after the 1-2 start, every game felt like an elimination game to the Vikings. After the state final, all-stater Adam Van Cleave said the team learned from the early loss to Pierce that it could play with any team in C-1.

The Vikings beat Milford 42-20, Boone Central 23-20 and previously undefeated Kearney Catholic 31-21 to get to Memorial Stadium. Frenzen said he made sure they enjoyed the entire experience, even the bus ride.

Advice on the championship-game atmosphere came from the likes of Mike Huffman at Class A Bellevue West and Evan Klanecky at C-2 Centennial. The best tip? Make sure to take time to have them be in the moment before going to work. Klanecky, who’s taken two teams to the finals, told him he regretted the first time not lining up his staff for a photo inside the stadium.

No rookie mistake for Frenzen. He got his staff — Jeff Bargen, Dan Krueger (who since has been promoted to athletic director and assistant principal), TJ Nielsen, Jimmy Biggs, Aaron Rudloff, Matt Cross, Zach Lesia and athletic trainer Mike Sloup — in the photo.

“That was great advice. He said you’re going to take that picture and it’s going to be one of your favorite ones you ever have from that day. And quite honestly that’s true," Frenzen said. “And we got on the bus that morning and they had a police escort out of town in Columbus for us. I told our kids getting on the bus that from this point forward until we get in the locker room, I want you guys taking your phones out and want you taking videos. I want you really making sure that you understand the importance of this day. I want you to have a record of this so you can reflect back on it.

“I saw kids video the police escort. We got into the stadium we lined up on the goal line. They got their phones out and we took a walk for 100 yards and let them film and just kind of be in the moment for a little bit before we went in the locker room and got to work. That’s a lasting memory.

“Then the stuff at the end of the game obviously is, too. Sharing that with my family is probably as big a memory as I’ll have, as well. My wife and daughters obviously live this day in and day out. For them to be able to be a part of that for a day and be able to just walk a little bit taller, I got a lot of satisfaction from it because it’s not easy being a coach’s family, for sure.

“For them to have that opportunity that day was pretty special.” 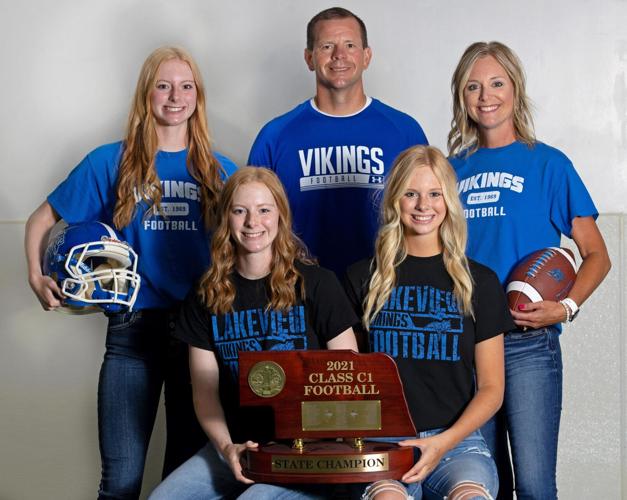 Head Football Coach Columbus Lakeview Kurt Frenzen (center) is the Omaha World Herald boys coach of the year. He is joined by his wife, Kelly (right), and his daughters Molly (from left), Haley, and Makenna. 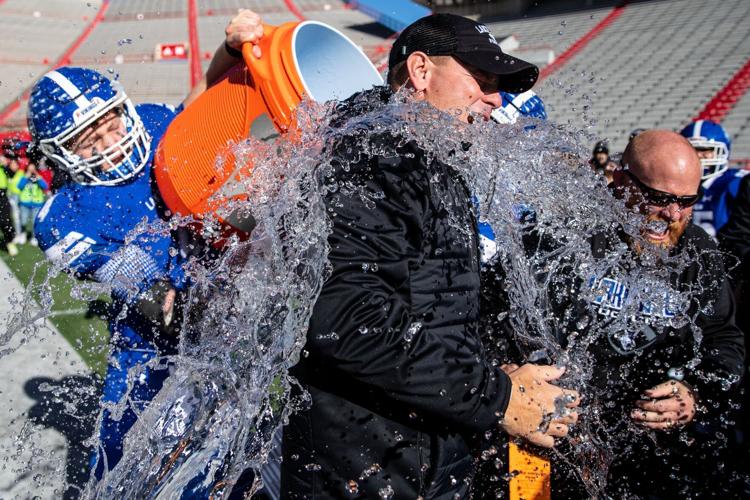 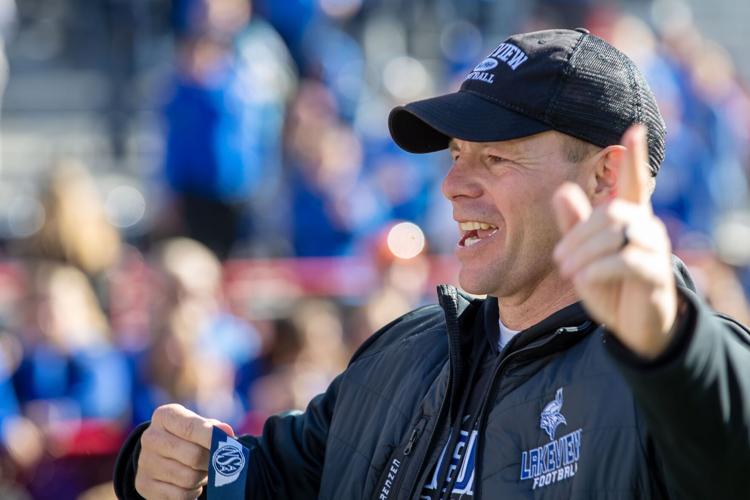 Columbus Lakeview coach Kurt Frenzen gets ready to give a medal to a player after defeating Pierce for the C-1 state championship.