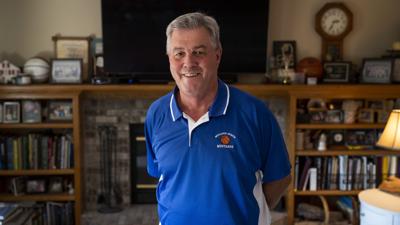 Tim Cannon had most of the basketball community pulling for him to win his first championship this season.

Not only do his peers like him, they remembered some of the crushing losses in his long coaching career before Millard North — one of the most talented teams of all time in Nebraska — outlasted defending champion Bellevue West in overtime.

“If there was one guy people wanted to see win a state title, it would have been Tim Cannon," Omaha Creighton Prep coach Josh Luedtke said. "One, because he’s such a nice guy, and two, he’s meant a lot to the basketball community over these last 40 years."

Said Bellevue West coach Doug Woodard after the state final: “Tim’s one of the finest people in coaching in Nebraska or anywhere else. And like you say, if you have to lose a game, I guess it’s a historical game and to somebody like Tim I’m just happy as can be for him, for his family. It’s a reward for how much heart he’s put into it all these years.”

For taking the Mustangs to their first state title, Cannon, 65, is The World-Herald Nebraska high school boys coach of the year. The newspaper started the award in 1951.

“I’ve read the article every year about the men and women that won the award, and I've always thought what phenomenal careers they've had," Cannon said. “So I feel really honored and blessed to be chosen among those people. I'm just grateful for all the people involved.”

Starting with his wife, the former Shirley Konz. She was the best girls basketball player at Council Bluffs St. Albert, a team coached by Tim’s dad, Tom Cannon. Tim was the best on the Falcons’ boys team.

She asked him out on a double date for the school’s Sadie Hawkins dance — girls do the asking — when they were juniors in 1972.

“He had a crush on me, I heard, and he didn’t even do anything about it for two years," she says. “My best friend made me ask him out. We’ve been together ever since and we actually played basketball on our first date.

“We found a basketball in his car and we went up to the school in my little hometown (Neola) and we shot a few buckets on our very first date.”

She’s been with him through his college days at Benedictine College and Creighton, his first coaching job at Omaha Cathedral, his first Class A job at Omaha Bryan and onto Millard North. Eventually she understood his need to scout other games, and became his shot-chart keeper. They brought up three daughters and were foster parents to more than 15 children while living near Norris Middle School.

Then Millard North got its rematch with the Thunderbirds in this year’s final. Would fate finally smile on the Mustangs? It did.

Hunter Sallis — a second-team prep All-American — scored 25 points and Jadin Johnson a career-high 24 in their final game as Mustangs. Jasen Green added 18 in the 84-78 overtime win at Pinnacle Bank Arena.

One way Cannon said his coaching style has evolved is letting assistants have more input.

The day of the final, Mike Etzelmiller and Andy Hahn came to him with an offensive set to get Saint Thomas or Green the ball at the foul line with teammates spread out and the Thunderbirds concentrating on Sallis.

Millard North hadn’t practiced the set. But the assistants were convincing. It could be installed during the walkthrough.

“So I trusted them," Cannon said. “And we scored, I believe, three times in overtime just running that little set.”

Shirley Cannon said the flood of well-wishes after that night has yet to subside. Roy Williams, before he retired as North Carolina’s coach and still was recruiting Sallis, called Cannon after the game while he was getting the Gatorade treatment and said it was the first time he watched a game on his phone.

One watching closer to home was Galen Gullie, an all-state guard for Cannon at Bryan who will be coaching against him as the Bears' new coach.

“He molded me into being the player I was on the court and off the court," Gullie said. “It’s an honor to have played for Coach Cannon.

“He was a type to get his point across in a different manner. He wasn’t necessarily the screaming kind of coach but he kind of let you know. He broke a lot of things down as far as understanding the game and in practices he prepared us for any opportunity.”

Cannon isn’t ready for retirement. It’s year to year now, but he’s keeping a commitment to Green — next season’s main man for the Mustangs and a Power Five prospect.

“Jason was about to head into fifth grade, and when I met Robert, his dad, I recognized him. I knew he played for Kevin Lehman (at UNO) once he gave me his name," Cannon said. “He said (Jasen) is going to be a good player. I said, ‘Are you going to send him here?’ He says, ‘Are you going to be here?’

“I said I’ll be here, and that’s been a conversation we’ve had about three straight years. And I’m going to be here for Jasen’s senior year. I really want to enjoy this year coming up.”

Falls City Sacred Heart was short on seniors this year, but the Irish pulled off their first outright Class D All-Sports Award since 2014.

Omaha Skutt, which won state championships in five team sports, takes the Class B All-Sports title for the third consecutive year and the 12th time in the last 17 years. 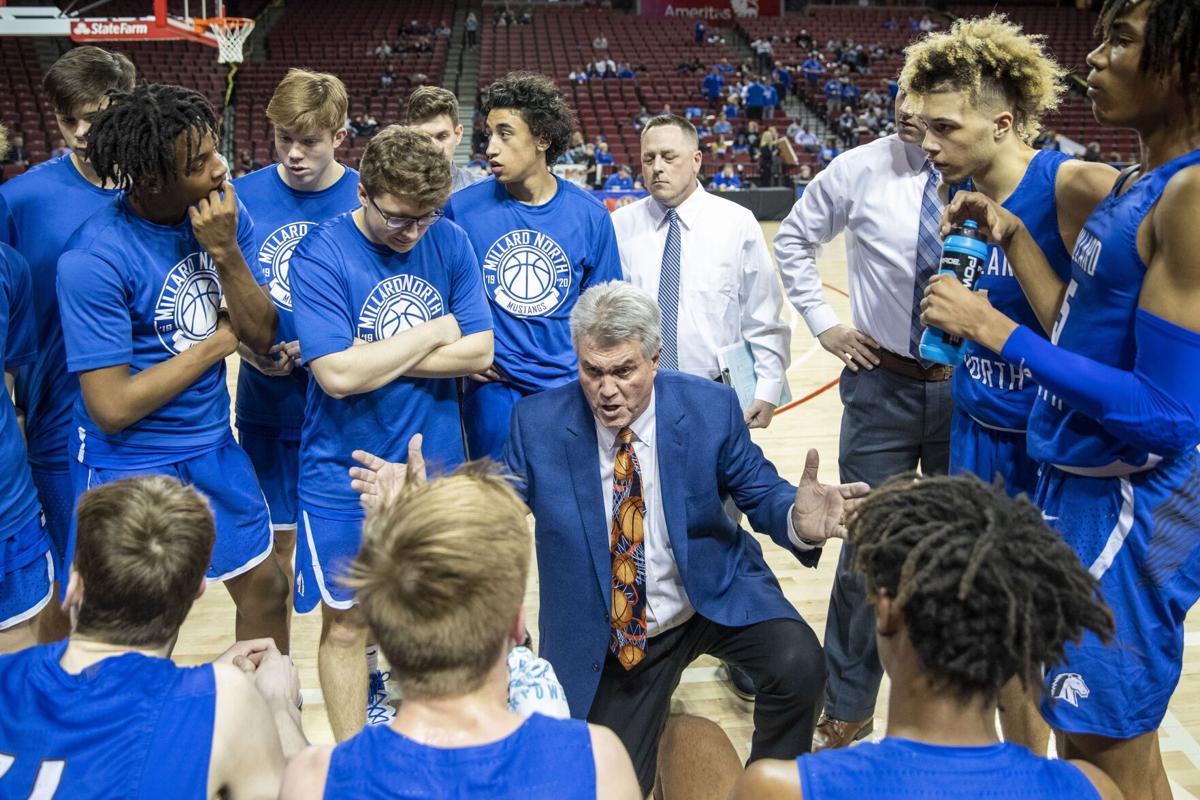 Millard North coach Tim Cannon talks to his team during a timeout as they take on Bellevue West during the 2020 Class A Nebraska state basketball championship. While the Thunderbirds would win the title that season, the Mustangs would capture their first state title the following year by defeating the Thunderbirds in overtime. 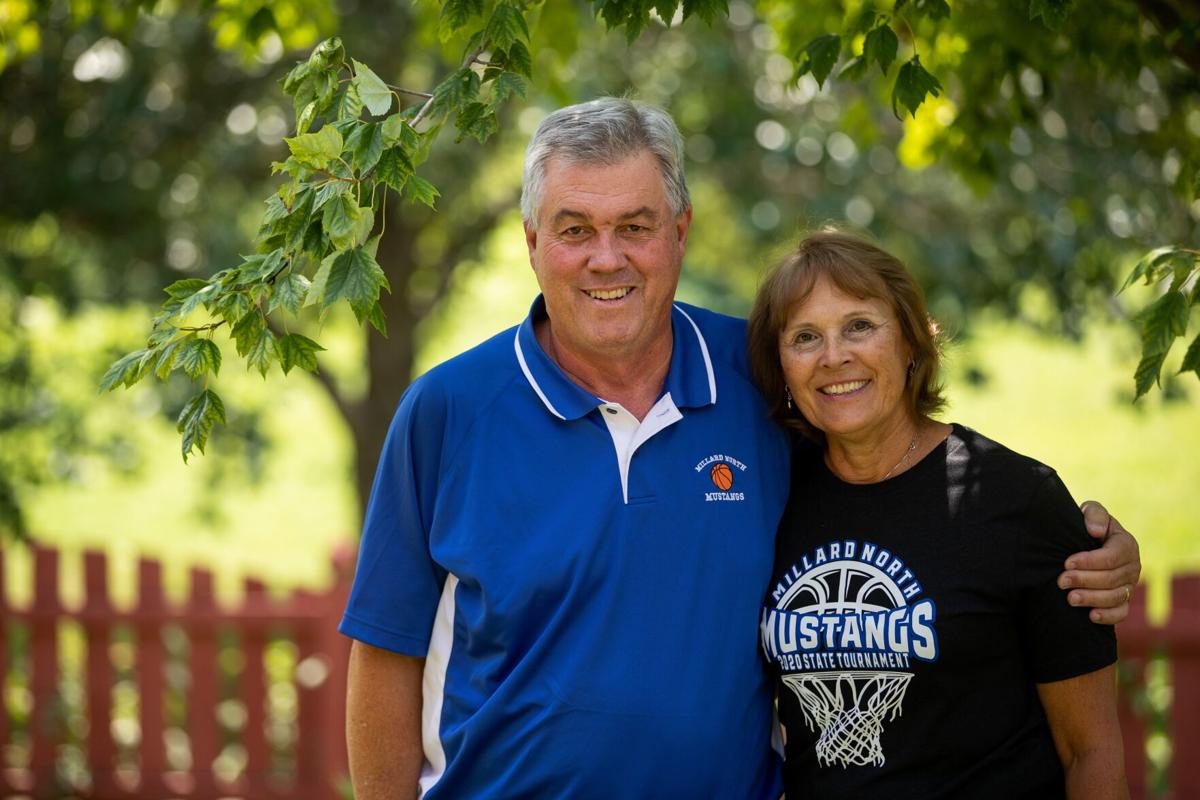 Millard North boys basketball coach Tim Cannon and his wife, Shirley, at their home. "We actually played basketball on our first date," Shirley said. “We found a basketball in his car and we went up to the school in my little hometown (Neola) and we shot a few buckets on our very first date.”