Keagan Johnson, Cole Payton and the rest of the 100th All-Nebraska team made it through a season unlike the previous 99.

The only certainty during the pandemic was uncertainty.

It started with the wipeout of spring sports. Then there was the delay getting into the weight room and even throwing the football around in the summer. Practices began, then the games. But there was an ever-present cloud of doubt. Would your team have a game this week?

“We went through a lot of ups and downs, and it wasn’t like anything I ever experienced before," Bellevue West’s Johnson said. “Not knowing if you were going to play each week was tough, but I’m ultimately grateful that we got the opportunity to play.

“In the end, I learned that you can’t take the game for granted, and that’s something I will always remember.”

With one final adjustment, moving the finals from Memorial Stadium to home sites, the state completed a season that some thought couldn’t happen.

"I’m very thankful to even have gotten an opportunity to play football this year. I will never forget all the special memories I made as a Westside football player and I’m so glad we went out on top," Payton said.

Payton quarterbacked Westside to its first state title and undefeated season since 1982. He joins Johnson as the All-Nebraska honorary captains. In equal measure they were team leaders and explosive players.

If the season could have been improved, it would have included a Warrior-Thunderbird game.

Attempts were unsuccessful in the regular season once the Omaha Public Schools’ fall-sports shutdown created schedule openings. Nor was there the expected finals rematch — Bellevue West beat Westside 35-0 in 2019. Kearney pulled off an all-time upset when it beat Bellevue West 41-40 in overtime in the quarterfinal.

“Obviously, Keegan’s just a spectacular football player and he's going to do great at Iowa," Payton said. “Yeah, I think everyone kind of wanted that rematch. But it didn't happen and that's that.”

On the All-Nebraska offense are James Carnie of Norris, Drew Christo of Elkhorn and Johnson as receivers; Teddy Prochazka and Isaac Zatechka of Elkhorn South, Gage Griffith of Aurora, Cade Haberman of Westside and Trevor Brown of Waverly as linemen; Payton, T.J. Urban of Millard South and Les Richardson of Bellevue West in the backfield; and Trent Brehm of Papillion-La Vista South as kicker.

On defense are Will Hubert of Papillion-La Vista and Daylon Keolavone of Grand Island as linemen; Jack McDonnell of Bellevue West, Tate Hinrichs of Millard South, Ben Radicia of Westside and James Conway of Millard West at linebacker; Avante Dickerson and Koby Bretz of Westside, Alex Bullock of Omaha Creighton Prep, Tyler LeClair of Bennington and Tommy Wroblewski of St. Paul as defensive backs; and Elkhorn's Gannon Gragert as an athlete/punter.

Brown, Haberman, Prochazka, Payton, McDonnell and Dickerson are two-time selections. Next year, Brown could be the first lineman to be a three-time All-Nebraska first-teamer.

As for their college choices, Carnie, Prochazka and Bretz signed with Nebraska earlier this month. Johnson signed with Iowa, Urban with Air Force, Haberman with Northern Illinois, Wroblewski with Wyoming, Payton with North Dakota State and Conway with Fordham. Bullock is walking on at NU. Christo is a Husker baseball signee.

Dickerson has been a longtime pledge to Minnesota, but has yet to sign with the Gophers.

Also noteworthy about the team:

» Westside’s six selections are the most for any school. Bellevue West had three. Elkhorn South, Elkhorn and Millard South had two apiece.

» Class B had six players chosen after only two last year. There is one from C-1 (Wroblewski).

Selections based on nominations by coaches and observations by The World-Herald staff. All coaches were sent nomination forms by email.

All-Nebraska football teams through the years

The two quarterbacks on the All-Nebraska second team will be in the Husker position room next year. Check out who else made the team.

Stu Pospisil joins Jake Anderson to break down the 2020 All-Nebraska football team, including some of the toughest omissions, how this year's section came together, plus his views from a unique high school season.

Previewing the quarterfinals of the Metro Conference holiday basketball tournament

The quarterfinals of the Metro Conference holiday basketball tournament are scheduled to be played Wednesday. Here's a preview of each game from The World-Herald's Stu Pospisil and Mike Patterson.

Omaha Westside's Avante Dickerson — one of the nation's top cornerback recruits — didn't sign with a school in December, and his coach says he's still weighing his options for his future.

Elkhorn South's Isaac Zatechka commits to walk on at Missouri

All-Nebraska offensive lineman Isaac Zatechka from Elkhorn South is headed to Missouri as a walk-on to play football. 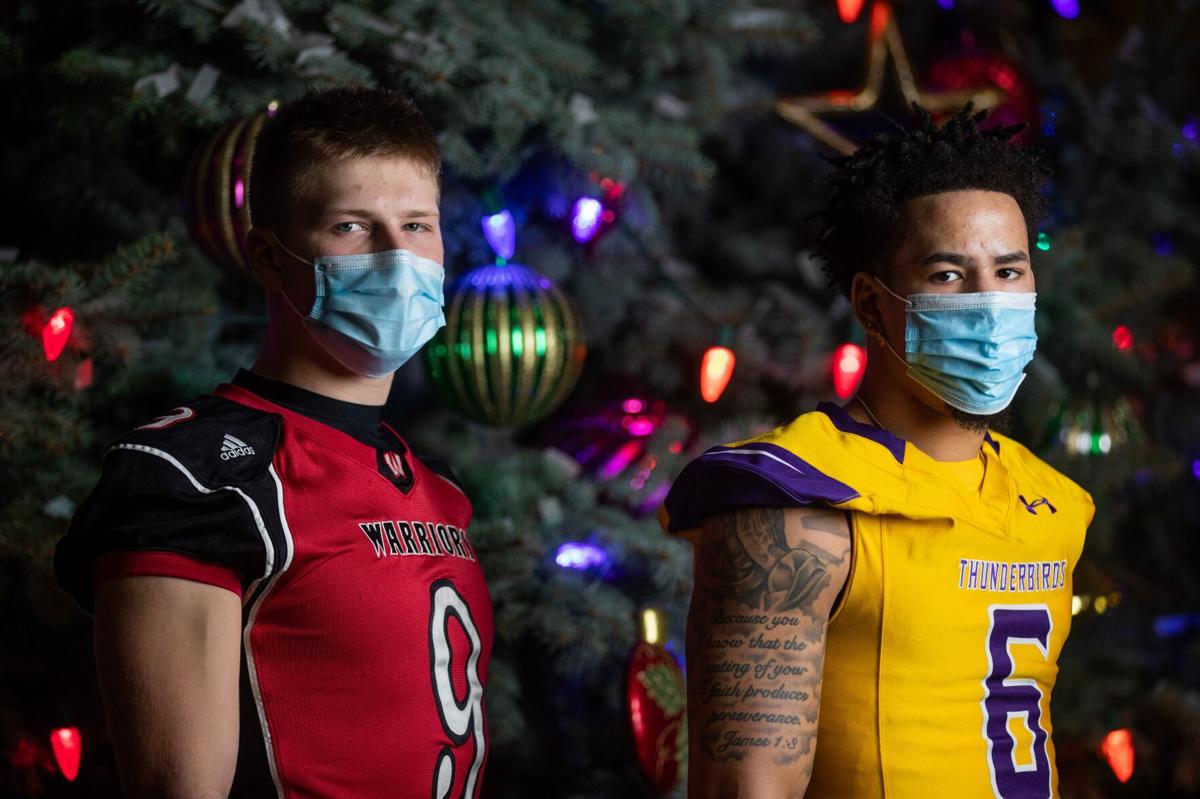 Cole Payton, left, had a record-setting Westside career while quarterbacking the Warriors to their first state title since 1982. Bellevue West's Keagan Johnson averaged 133 yards a game receiving in a seven-game season. 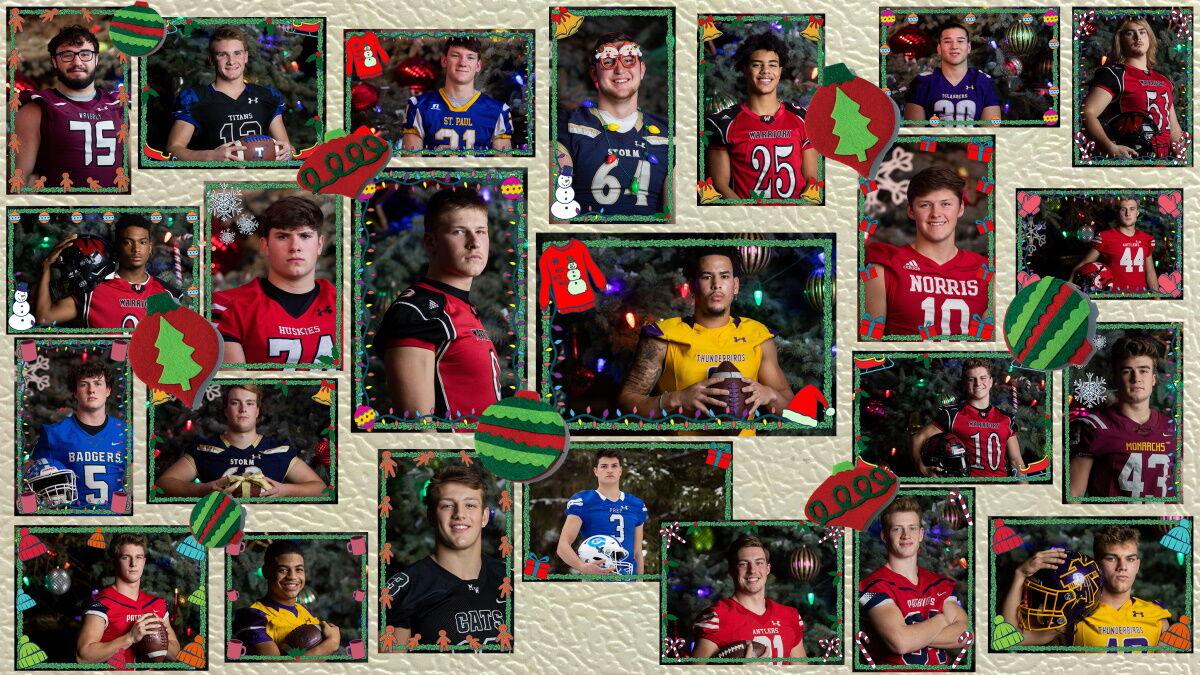 When face masks and social distancing were the hallmarks of the season for most, high school football players in 2020 faced a daily challenge of playing well while staying well in a sport where social distance is only good if you are a receiver. But by the holiday season, the top talent had risen to the top of the stack, and All-Nebraska honors were under the tree for an elite group who received invitations from us to meet at the Durham Museum in Omaha to memorialize the moment in holiday cards.