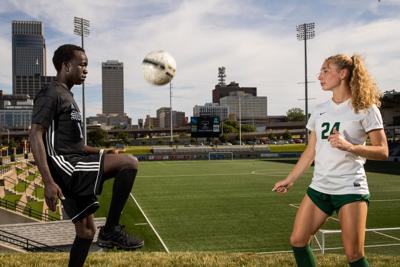 Sarah Weber and Wawa Palga are the kinds of players who catch your eye on the pitch.

Gretna’s Weber and Palga of Omaha South were crucial parts of state soccer titles last month, and today are named the captains of The World-Herald’s All-Nebraska teams.

Both do things in one gear — fast. They’re forwards by nature, but played in the midfield throughout their senior seasons.

It didn’t change the approach, though.

That was evident during a record-breaking campaign in which the Nebraska commit set the Class A standard for goals in a season. The last of her 48 scores gave her 100 during her three-year career.

Weber lived up to the attention this season, regularly beating double — and sometimes triple — teams on her way to two or more goals in 15 of 22 matches.

That includes eight hat tricks, the last of which came in an opening-round win at the state tournament.

Weber would put the cherry on top with a goal in Gretna’s 2-1 win in the state final. She called winning the title “quite surreal.”

“To get that victory, still right now it doesn’t seem real,” Weber said. “It was so cool what we were able to pull off this season.”

All with Weber at the wheel.

Playing in the middle for the first time in her career, Weber helped push Gretna at a historic pace. The Dragons set a Class A record with 144 goals on the season, 19 more than the previous mark.

“Sarah has great vision and has a great turn of speed, which allows her to get away from players, even when man-marked,” Hawkins said.

She doesn’t just have a nose for scoring, Hawkins said. Weber has a hunger for it.

“Her stats are a testament to the hard work she puts in,” Hawkins said, “not only during training, but in her own time.”

But soccer isn’t even the sport Weber has played the longest.

She started with tennis, and gives lessons from time to time. She likes the individual aspect, saying working angles and footwork on the court only goes to help on the pitch.

“The mentality is the key,” Weber said of the difference with tennis. “Either I figure it out or it’s not going to get figured out.”

She plans to study computer science in Lincoln, but she’s hoping the education doesn’t stop in the classroom. Weber is excited to play at the next level for all of the obvious reasons, and personal growth is included.

“It’s just so much faster,” she said of the college game. “That’s what I’m most looking forward to. I’m bound to get that much better.”

It’s the same reason Palga — nicknamed Wawa because his brother couldn’t pronounce Emanuel, his real name, when they were kids — left Omaha and the comforts of home at 15 to try his hand at a U.S. Soccer Development Academy in Utah.

Palga made six appearances for Real Salt Lake during the 2018-2019 season, starting once and battling through a pair of injuries while with the club’s U-16/17 team.

All may not have gone exactly as he planned, but Palga called the experience an important one for his maturity.

“It was my first time out of the state, so it was really eye opening,” he said. “When I was down there I improved a lot. But when I came back from Utah, I think I really gained more potential and skill. I was upset leaving Salt Lake, but when I came back I was working 10 times harder.”

“He just came back bigger, faster, stronger and more skilled,” Maass said. “Everything about him was better when he got back.”

Both got an early test when Palga’s junior season was canceled due to COVID-19. It gave him a sense of urgency, one last chance to show all those new skills. And Palga didn’t disappoint.

He scored 11 goals and dished out five assists for the Packers. But his contribution couldn’t just be measured in numbers, Maass said.

“Wawa is your team leader that truly leads the team,” Maass said. “We felt like the pace of every game was resting on Wawa and Kevin (Becerril). If they decided they wanted to push the action, the team went with them.”

» South goes back to back

After scoring a go-ahead goal on a penalty kick in the second half of the state final, he was sent off with a red card after a motion toward the Lincoln Southwest crowd.

Palga was forced to watch as his team played a man down the rest of the way before eventually pulling out a second straight state title in a shootout.

He called it a learning experience, and said the sick feeling didn’t leave his stomach until the Packers were celebrating.

“If that would have cost us the game ….” he said, never finishing that thought.

Maass said it wasn’t indicative of what Palga brought to the team throughout the season.

“This year his mentality was a lot different,” Maass said. “I think he came back and wanted to win a state championship.”

Palga is hoping to continue playing in junior college next season, with an eye on a Division I opportunity soon.

Check out the complete listing of all Nebraska high school girls soccer players honored with All-Class and All-Metro recognition.

Check out the results from Saturday's American Legion baseball games.

Arizona State is one school that's heavily recruiting many of the top football prospects in Nebraska. Here's an update on the recruitment of Devon Jackson, Deshawn Woods, Kaden Helms and Micah Riley-Ducker.