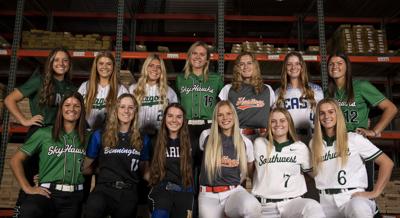 From opening day in August to the final out of the state championships, it was clear the story of the 29th season of Nebraska high school softball was going to be offense.

Double-digit scores — often by both teams — became more common. It wasn’t just because teams were spraying singles all over the yard.

Extra-base hits have become more common instead of the small ball that accounted for more action in previous years.

Even in low-scoring games, it took a pair of solo home runs to determine a winner in one of the best games of the season. That was Aug. 21 when defending Class B champion and top-ranked Omaha Skutt traveled to Omaha Marian to play the then-No. 3 Crusaders.

That outlier game, which the SkyHawks won 2-0, was notable not for big run totals but for strikeouts.

The teams combined for 30 strikeouts. Crusaders junior Maddia Groff posted 18 but she also surrendered a pair of solo home runs. Skutt senior Ruby Meylan had 12 strikeouts and gave up two hits, but none in the final five innings.

That also was the day the state’s three best pitchers played in the same game. Hannah Camenzind, who alternated starts all season with Meylan, played center field and would get her first start in the circle three days later against defending Class A champ Papillion-La Vista.

Camenzind was the offensive star of the Marian game, collecting three of Skutt’s five hits. The first was a 240-foot solo homer to center in the first inning.

On a day when Camenzind wasn’t pitching, she brought the lumber when her team needed it most. Catcher Kaitlin Foral added another solo shot to lead off the fourth.

That’s how the top teams — and the top players — did it this season, by bringing the lumber.

That game was one of four the Class B champion SkyHawks played that were decided by one or two runs on their way to a 33-0 season, the first undefeated run in the 25-year history of Class B.

In 18 of those 33 victories, the SkyHawks scored in double digits, including three of their four victories at state.

Yes they use aluminum bats, but the “Bring the Lumber” phrase is apt. And it’s why the group posed for photos at the Chicago Lumber Yard in Omaha.

While Camenzind, Meylan and Groff were the best all season at minimizing opposing offenses, they also were getting their share of extra-base hits, just like the other 10 players who join them on The World-Herald’s All-Nebraska first team.

After Camenzind was selected as the honorary captain of the Class B and All-Omaha area teams in 2020, the Arkansas commit adds the title of All-Nebraska captain this season.

This is the third consecutive season that Camenzind has made the All-Nebraska first team. There are three other seniors — Meylan, Camenzind’s twin sister Lauren and Kaelan Schultz of Hastings — who now are two-time All-Nebraska honorees.

As a freshman and a sophomore, Groff was a second-team All-Nebraska pick. She leads the list of nine players who are first-time selections. Groff, Faith Mills of Gretna and Samantha Schmidt of Hastings are first-time picks as juniors.

The other six players are seniors, including two from Class A champion Lincoln Southwest — catcher Madison Divis and infielder Ashley Smetter. Creighton commit Ensley Frame of Gretna is the other infielder while UNO commit Ava Rongisch of Millard West is in the outfield.

Morgan Adams of Class A runner-up Lincoln East and Wichita State commit Taylor Sedlacek of Bennington round out the group of first-team honorees.

Bennington running back Dylan Mostek set the 11-man state rushing record and put the undefeated Badgers on their way to their first Class B state title.

Millard South coach Andy Means will retire after this school year. He coached the Patriots for 18 years, won a state title in 2009 and made the playoffs 15 times.

Columbus Lakeview benefited from a fumble return TD, and long interception and kickoff returns, in its state-championship clinching victory against Pierce on Tuesday in Memorial Stadium.

Tyson Denkert scored all but four of the Blue Devils’ points in the win over Sandhills/Thedford.

There are three more state championship games Tuesday at Memorial Stadium. Stu Pospisil previews the action for Classes A, C-1 and C-2.