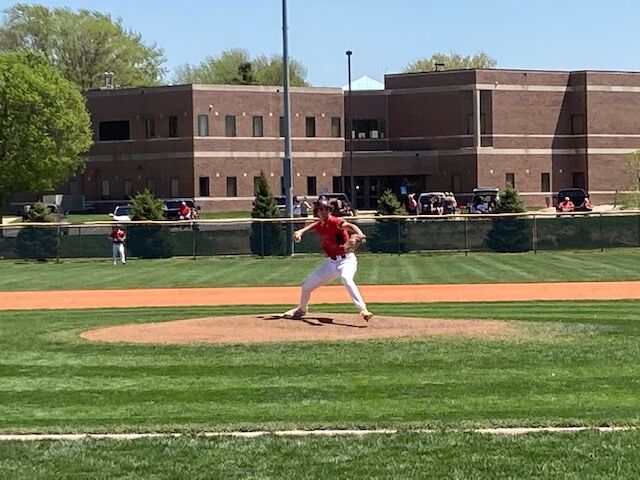 Millard South starting pitcher Braden Cannon helped rally the Patriots with his bat in the seventh inning, belting a two-run triple to help his team rally for a 10-9 win. 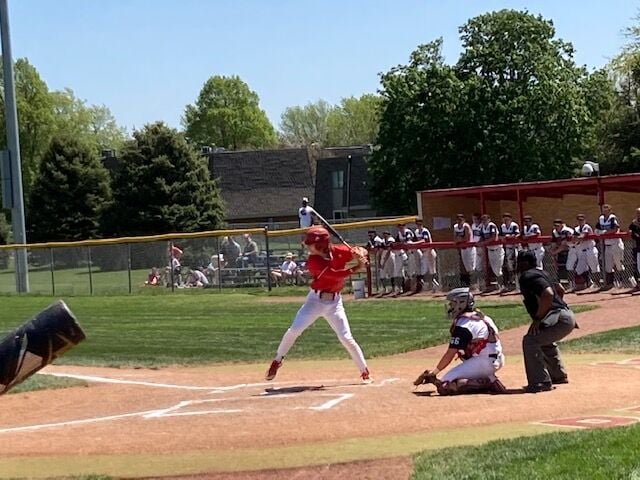 Brayden Smith had a two-run homer and three RBIs Saturday to help lift Millard South to a 10-9 win over Omaha Westside.

His Patriots proved it again Saturday in the championship game of their own tournament.

Geary’s squad rallied for three runs in the seventh to defeat Omaha Westside 10-9 to win the Don Kraft/Millard South Invitational. The third-ranked Patriots moved to 27-4 while defeating the Warriors for the third time.

“Every game against them has been a battle,” Geary said. “But as long as we have an out left, we feel like we have a chance.”

Westside surged into the lead with an eight-run fifth that erased Millard South’s 5-1 advantage. Jack Wimmer and Simon Stover each belted a three-run homer, but it wasn’t enough on a very windy day that made every fly ball dangerous.

“We told our guys before the game this one had the potential to be 15-13,” Warriors coach Otis Seals said. “We knew it was going to be a tough day for the pitchers.”

Westside starter Kadyn Van Hill surrendered two unearned runs in the sixth when the Warriors committed three infield errors, trimming their advantage to 9-7. That set the stage for the seventh when Millard South completed its comeback.

Cam Kozeal and pinch-hitter Jayden Folkers singled in the seventh off reliever Jackson Yeager, and Braden Cannon followed with a game-tying triple. After two intentional walks and a strikeout, Ashton Jorges lofted a sacrifice fly just deep enough in right to bring home the winning run.

“On a normal day we probably don’t try to score on that play,” Geary said. “But that wind made every defensive play a challenge.”

Cannon, who had three RBIs, was the starting pitcher for the Patriots. He gave way to reliever Caden Blair in Westside’s big fifth inning.

“It was really tough pitching today,” Cannon said. “One mistake and it was over the fence.”

Cannon said he was happy to help the team with his bat in the final inning.

“I was down 0-2 in the count and I was trying to hit a line drive over the second baseman,” he said. “It carried farther than that and I just kept on running.”

Leadoff batter Brayden Smith also drove in three for the Patriots, who won their own tourney for the first time since 2011. He had a two-run homer in the fourth and a run-scoring grounder in the sixth.

Dalton Bargo drove in a pair for Westside while Aidan Jackson had four hits — three singles and a triple — and scored twice.

“We knew that we had to keep scoring and we weren’t able to do it those last two innings,” Seals said. “Our kids battled to get to this final, but we came up just a little short.”

Beatrice's Adam DeBoer belted three homers and had nine RBIs in a win over Nebraska City. His homers tied a single-game state record and his RBI total set a new Class B mark.

A postseason that promised chaos got it after the first match, and then continuously throughout the opening day of district soccer tournaments across Nebraska.

Lincoln Pius X's Clare Plachy didn’t have to wait long to avenge her second loss of the spring. She defeated Millard North's Mary Faulk in the No. 1 singles title match at the Papillion-La Vista Invitational.

As the Nebraska high school baseball season enters its final weeks, here's a look at the updated stats leaders throughout the state.

Millard South starting pitcher Braden Cannon helped rally the Patriots with his bat in the seventh inning, belting a two-run triple to help his team rally for a 10-9 win.

Brayden Smith had a two-run homer and three RBIs Saturday to help lift Millard South to a 10-9 win over Omaha Westside.