Paul Garcia’s not apologizing for his gold medal — and he shouldn’t have to.

But nothing about the way the Scottsbluff senior finished off a historic run at the state wrestling tournament felt complete.

Garcia became the 34th wrestler in Nebraska history to win four state titles with a controversial 1-0 double overtime win over Gering’s Paul Ruff Saturday in the 126-pound Class B final at the CHI Health Center.

And "controversial" may be putting it mildly.

Ruff was hit with his second and third cautions of the match — the latter giving Garcia the deciding point — after lining up in an incorrect starting position twice in the first tiebreaker period.

Both times Ruff had his knees above the starting line.

“Right when he put those knees up I was like ‘There it is,’” Garcia said.

He was the only one wrestling that did.

After riding out Garcia in the second tiebreaker, Ruff — who is deaf — looked to his corner to see what was next.

It wasn’t until he noticed Garcia celebrating that Ruff realized the match was over.

In a hallway moments later — after Ruff had attached his cochlear implant — Gering coach Jarred Berger explained to him exactly what happened.

“He had no clue,” Berger said.

It brought an end to one of the rarest and most even rivalries in recent history.

Prior to Saturday’s showdown they had split their six matches over the last two seasons. Garcia won in sudden victory when they met in the 2020 state final.

Saturday was no different.

Through six minutes of regulation, neither was able to find much offense. Ruff chose the top position to start the second period and rode out the entire frame. Garcia opted to go down to begin the third, and found little room to move through the period.

The closest the match came to points was late in the first extra session when Garcia got in deep on a single, but couldn’t finish it.

It was then — in the first tiebreaker round — that things got weird.

Ruff was given a caution for how he lined up once, and after a brief skirmish the two came back to the center. It was then that he was called again, giving Garcia a point and drawing loud boos from the crowd.

But Ruff was unaware.

Bennington's Kael Lauridsen is now a two-time state champion, and he's got even bigger dreams

After not getting out from bottom in the first tiebreaker round, he rode Garcia out hard for the 30 seconds in the second tiebreaker.

Garcia said afterwards that he “over exaggerated” lifts and effort on bottom the rest of the way, an indication that he realized Ruff was in the dark.

“To beat a great wrestler you have to know everything that you’re going to do the whole time,” Garcia said, “no matter if it’s before the ref whistles or after.”

He said he thought the moment “got to” Ruff.

“You’ve kind of got to realize that your knees are kind of above the line,” Garcia said.

Stodola called it “attention to detail.”

“If it would have came down to the last rideout, it would have come down to a coin flip,” he said. “That’s just the way the cards fell today. We always talk about winning each period. We didn’t lose any periods, but we won one. And that’s all it takes sometimes.

“Sometimes you get lucky, I guess.”

Evan Canoyer, Waverly: The senior, ranked unanimously No. 1 at 170 pounds, won his second state title in his third-straight finals appearance. Canoyer, a Cornell recruit, beat fourth-ranked Torrance Keehn of Beatrice 9-3 after knocking off No. 2 Jacob Awiszus of Gering in the semifinals earlier in the day.

A battle of big boy unbeatens lived up to the buzz when Lathan Duda of Broken Bow and Blair’s Dexter Larsen went toe-to-toe for the crown at 195 pounds. Duda, a North Dakota State wrestling recruit, scored all three points in the second period and held off a last-second charge from Larsen to improve to finish his season 51-0 and win a second state title.

— Bennington’s Kael Lauridsen on his state championship celebration, a blown kiss towards the crowd. Lauridsen said it was directed at the father of Ogallala’s Pedro Carizales, who Lauridsen pinned in the second round for his second gold medal.

Rubek: For many state wrestling champs, their journey begins where 'iron sharpens iron'

Gering won the state wrestling team title despite not having an individual winner, edging runner-up Beatrice by four points.

“I wouldn’t be the wrestler I am without losing that, so I thank that loss,” Valentine's Chris Williams said. “I would have kept coasting and doing my thing. But I got so much better on my feet, got better at every position because of that match.”

Rubek: Tough year for Plainview and its coach ends with another state title

A coach diagnosed with leukemia, a former star team member dying in a car crash. The Plainview wrestlers “had just a heck of a lot of things they’ve had to deal with this year.” 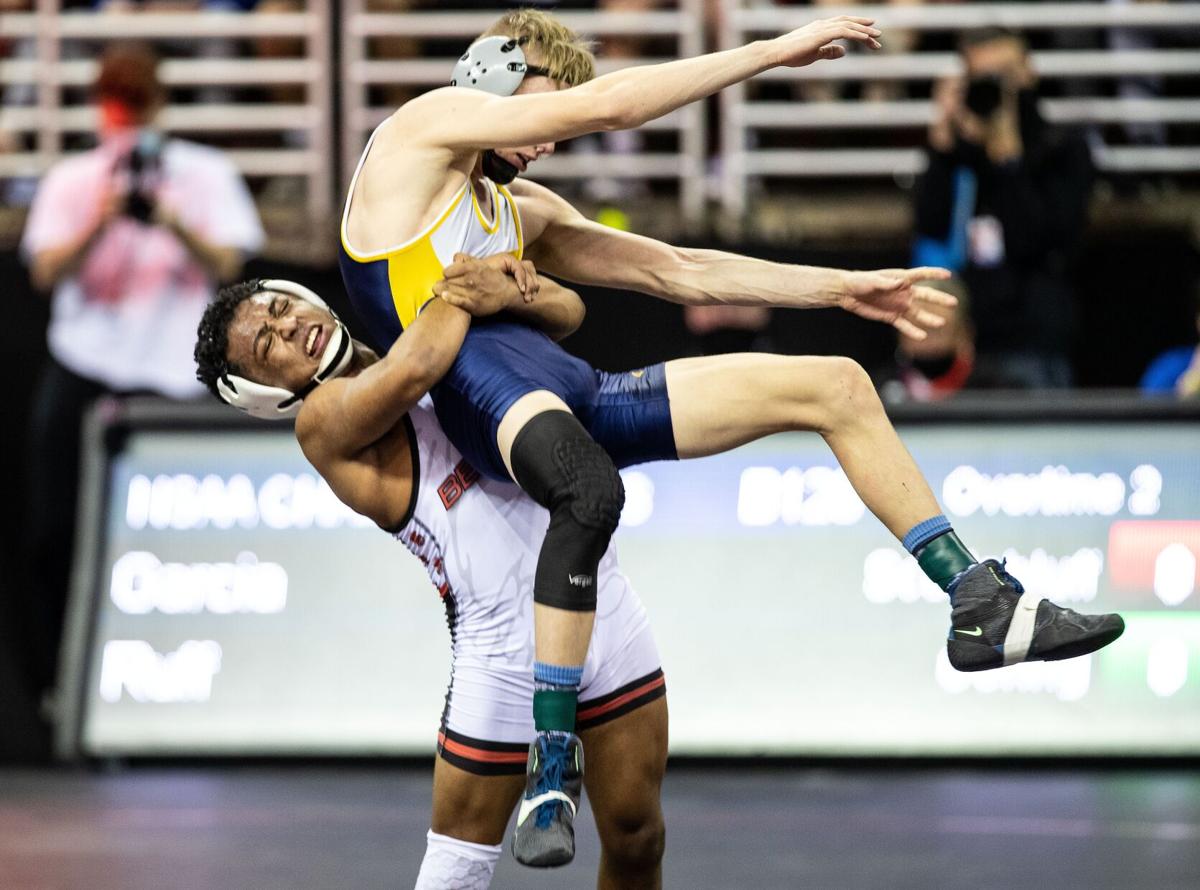 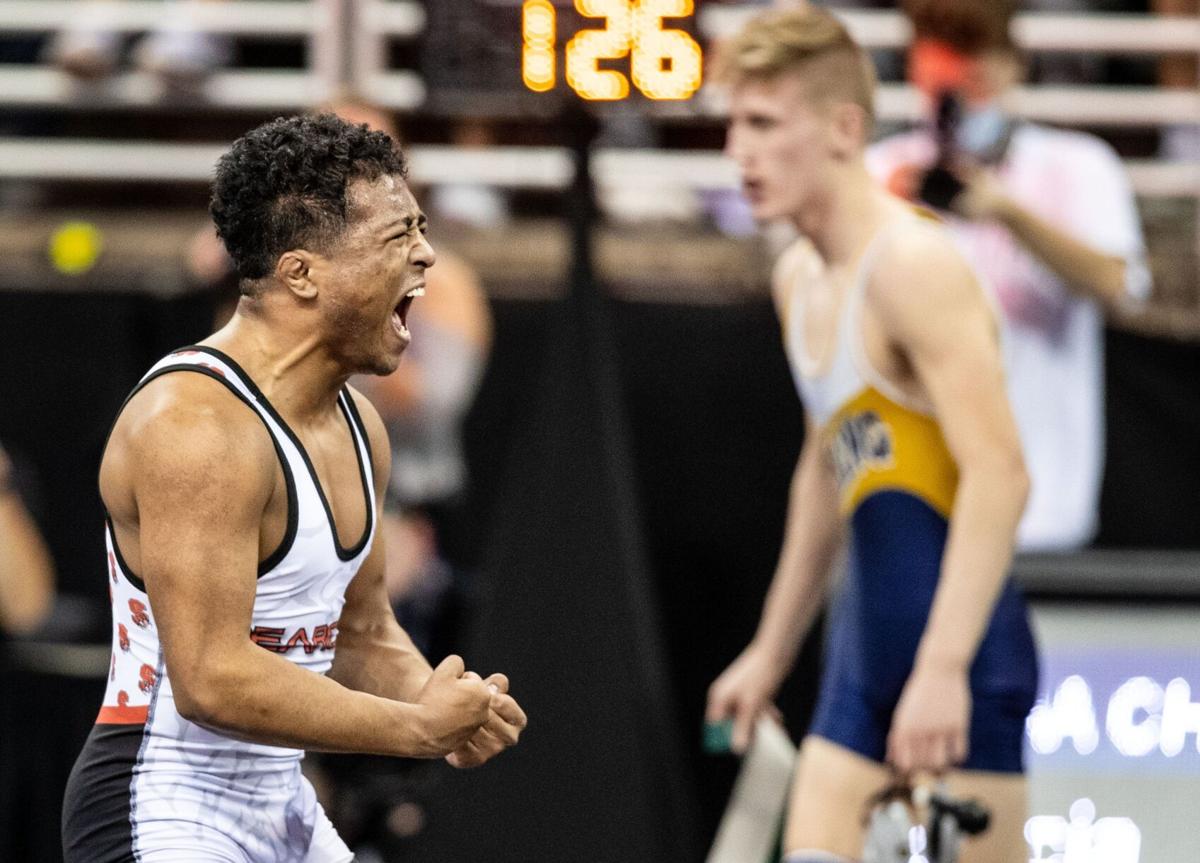