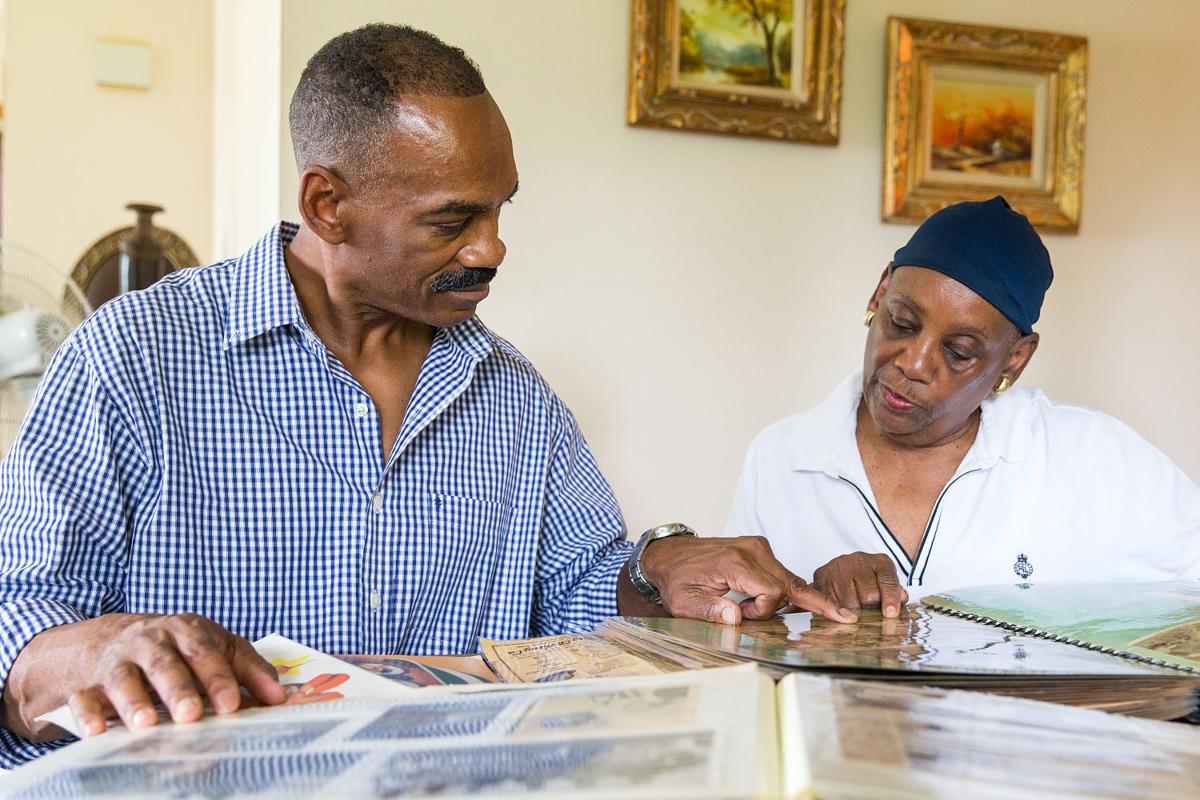 Mollie Bryant and Robert Bryant, the wife and son of former Husker great Charles Bryant, look through scrapbooks containing mementos from Charles’ career. Brandin Bryant, Robert’s son, will take the field at Memorial Stadium today, but not in the NU red of his grandfather; he will be wearing the blue of Florida Atlantic. 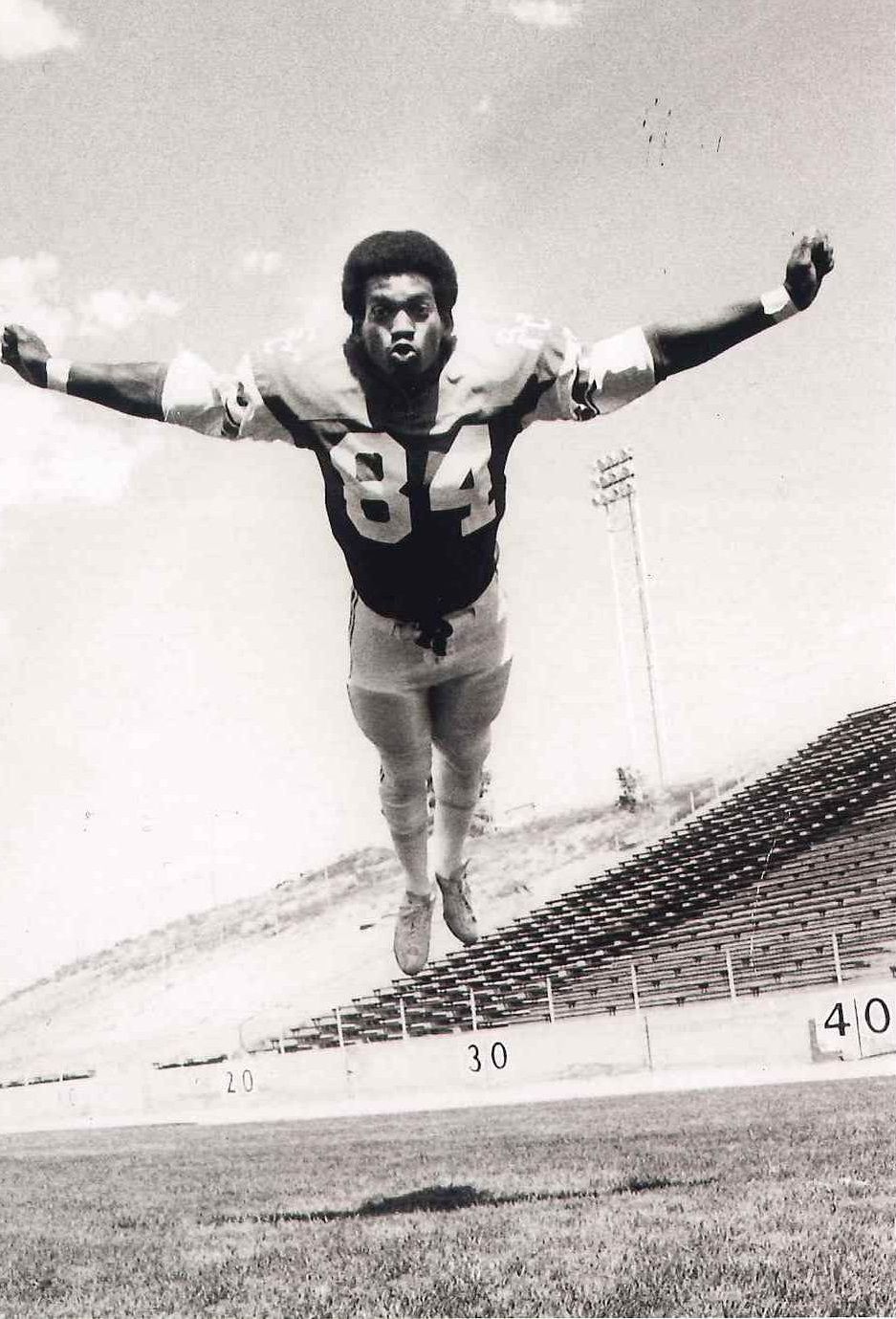 Robert Bryant at the University of Southern Colorado 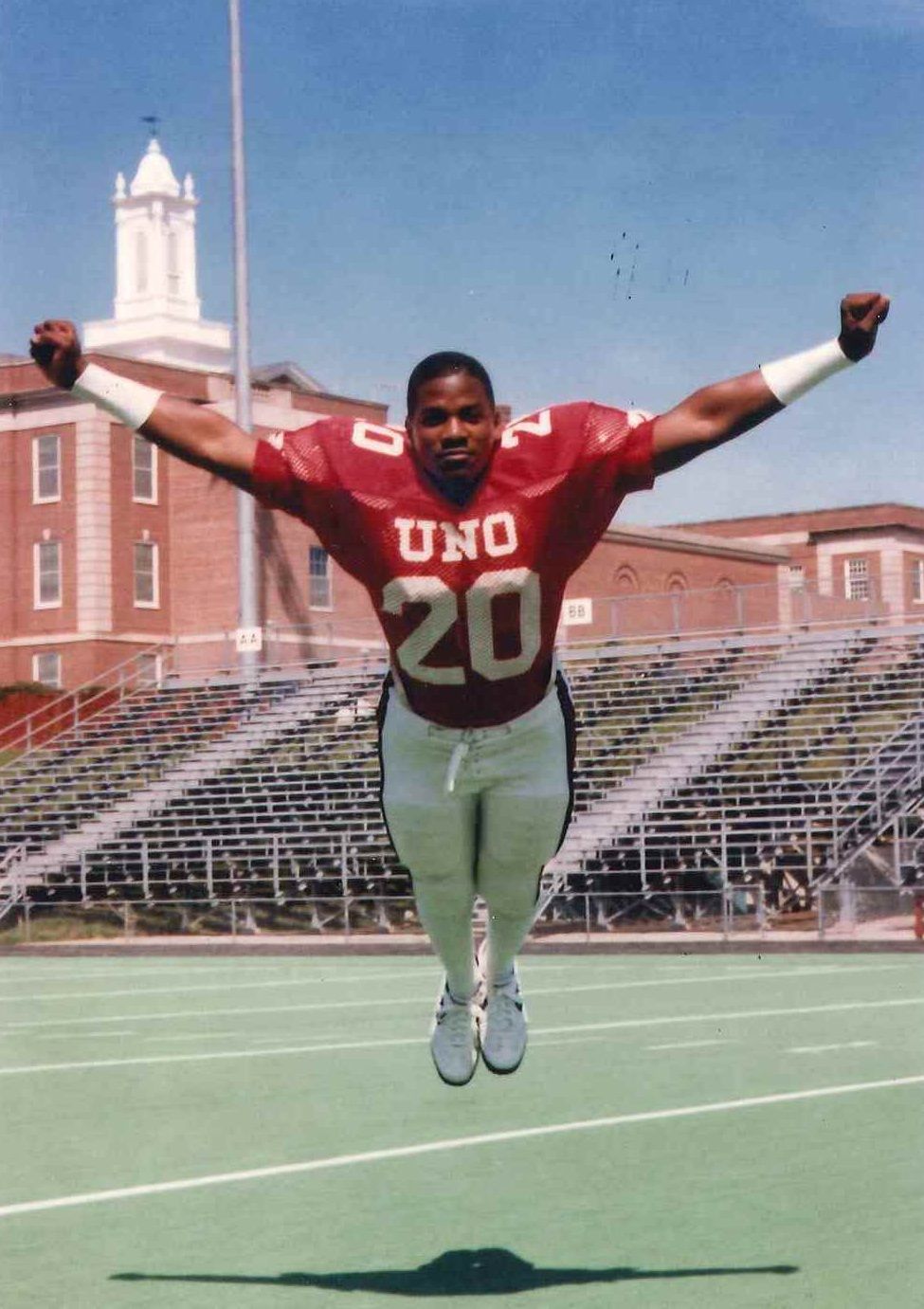 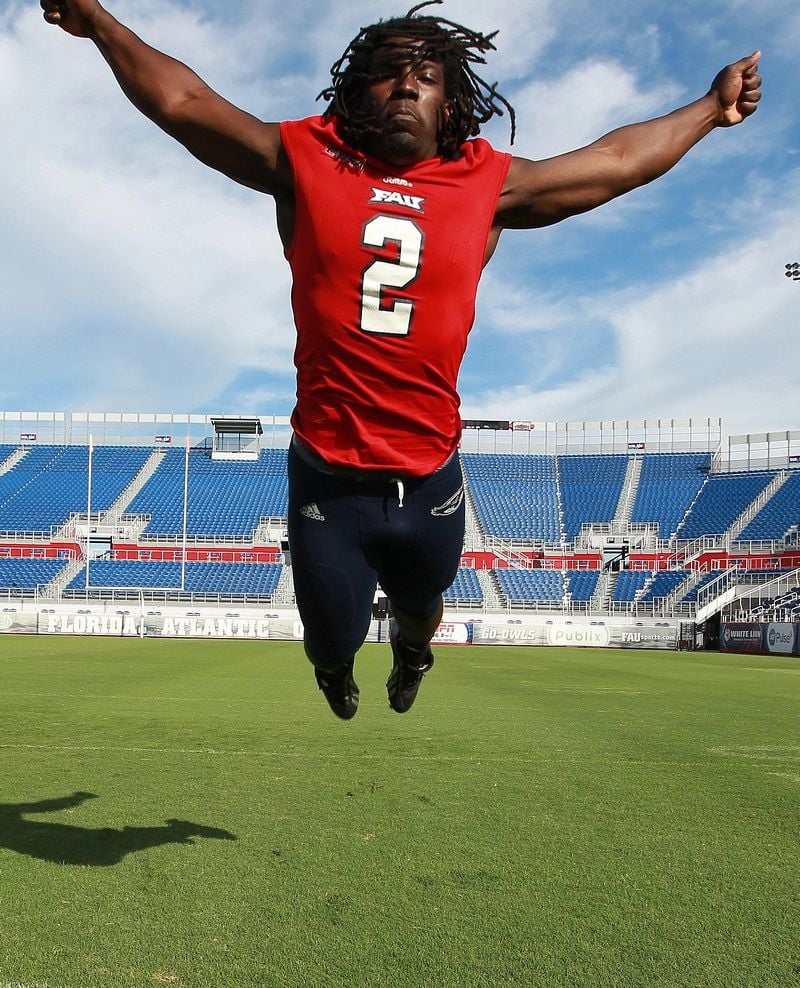 Every morning at 6:30, headlights turned up Camden Avenue and pulled into the one-lane driveway atop the hill.

Dad had to go to work early, so Brandin Bryant and his sister staggered into Grandpa and Grandma’s raised ranch for breakfast and a ride to school.

It was their second home. They mowed the yard. Played football. And when Grandpa wasn’t teaching Brandin to read or write, he taught history:

How a South Omaha kid nicknamed “Bruzzy” jumped in the back of a pickup truck, rode to Lincoln and walked on at Nebraska when the Huskers didn’t want black players. How Bruzzy earned a scholarship, a starting position and all-conference honors, flattening a barrier that stood for four decades.

How frequently Bruzzy was judged by his skin color, not his talent. How on the last road trip of his career, the 1955 Orange Bowl, he was barred from the hotel lobby and the swimming pool. On New Year’s Day afternoon, he led NU with 14 tackles.

Brandin knew it all by heart. And on Saturdays, he followed Grandpa back to Lincoln, where they sat in the east balcony and cheered the Big Red. Brandin imagined growing up and playing in the same stadium.

Today he gets his wish. The Omaha North grad will burst out of the south tunnel and soak up the Sea of Red. The twist? He’ll be wearing Florida Atlantic blue.

In the southwest corner, 140 family and friends will keep an eye on the 290-pound defensive lineman. Mom and Dad will be there. His grandma and sister. Aunts and uncles. Cousins upon cousins. But not Grandpa.

Charles “Bruzzy” Bryant died in 2004, three days shy of the 50th anniversary of that first Orange Bowl for Nebraska. He was 71, a high school educator, an award-winning wrestling coach, a self-taught poet and an artist.

His prize piece, a Buffalo Soldier sculpture, honored the first blacks in the U.S. Army after the Civil War. Charles made five of them. Sold four for $3,000 to $5,000 apiece.

The last one sits in the corner of his old living room, the first thing you see when you walk in the front door.

Every morning at 7, Mollie Bryant leaves the raised ranch on Camden Avenue and meets her neighbor. They go to Benson Park for a brisk walk around the lake. Two miles.

Mollie, a breast cancer survivor, is 80 years old going on 40. She can sit on the floor of her living room, spread her legs into an obtuse angle and touch her nose to the carpet. Pretty impressive. Then she sits up, pulls her leg to her forehead and extends it over her head like a ballerina.

“My kids tell me, ‘Stop doing all those freaky exercises.’ ”

The scrapbooks document Charles’ path from kindergarten to the Green Bay Packers. At Omaha South, he was a standout in football, basketball, wrestling, baseball and track. But while two teammates received an offer from Bill Glassford to join the Huskers, Bryant heard nothing. Nebraska didn’t offer athletic scholarships to blacks.

“He said, ‘You’re gonna play football at Nebraska; get in that truck,’ ” Mollie remembers. “ ‘Jump in that truck, Bryant. You’re going.’ ”

Bruzzy’s friends mocked him. You’ll be working with us at the packinghouse soon enough, they said. But Bryant overcame his initial fear and coaxed Glassford into giving him a shot. A year later, Bryant had a scholarship, and was starting at linebacker and offensive guard at 190 pounds. He was the first black letterman at NU since 1913.

Teammates, he once said, treated him like “a spaceman.” But life was toughest on the road. Occasionally he had to sleep on the bus or stay at the black YMCA. Teammates brought him food after a restaurant turned him away.

In ’53, two more black players, Jon McWilliams and Sylvester Harris, joined the varsity team. Nebraska made its second-ever bowl appearance after the ’54 season and Bryant was honorable mention All-America.

“I saw that jacket, and I knew it was Nebraska, and I said, ‘Wooo!’ I seen the girls after him.”

After the Packers cut him, Charles returned to Omaha intending to teach history. But history wasn’t on his side. The Omaha Public Schools didn’t hire black teachers in 1955.

It was a turbulent time, Mollie says. Riots erupted only a mile from the Bryants’ home. We gotta get out, she told him. They moved west, buying the 10-year-old house on Camden Avenue. Eleven-hundred square feet wasn’t much for five kids, and Charles ran a tight ship.

“My dad allowed us to use drugs twice,” son Robert says. “He drug us to church, and he drug us to school.”

Charles got his master’s degree at UNO and, in 1973, Omaha Benson hired him as assistant principal. He spent the next 23 years in OPS. He told his children that they had three choices after high school: college, the army or a full-time job. You’re not eating our food for free, he told them.

All five kids went to college (one at UNO). Robert became a football All-American at Southern Colorado. And in 1994, he had his own son, Brandin.

“This is where they played football,” Mollie says, pointing through the dining room window. Chain-link fence flanks two towering trees. “Right back here. Take a look at the backyard. Nothing has changed.”

But even then, Grandpa had a feeling.

“He said, ‘Mollie, that’s gonna be my best football player right there.’ Oh yes he did. He saw that when he was out there throwing balls to Brandin at 4 and 5 years old. He said, ‘Mollie, he’s got some moves.’ That’s what he said. Oh, he loved Brandin.”

So this was the family plan: Brandin would play at Nebraska. And Grandpa would be there every Saturday, watching him from the east balcony.

Then in 2003, Charles got sick. He didn’t like going to doctors. By the time they found the colon cancer, he didn’t have a chance. His weight dropped from 260 pounds to 110.

Days before Christmas, Charles demanded to come home from the hospital. He walked to the dining room table, sat in his chair and said, “This is where I want to eat Christmas dinner.” He survived another week, but never left the bedroom.

Brandin was 11. He remembers the church. Remembers seeing his dad and grandma crying. He remembers the funeral program. Ten years later, a copy hangs on his bedroom wall in Florida, accompanied by a piece of his grandfather’s artwork.

Brandin Bryant used to visit Nebraska in the summers.

He stayed with Husker receiver Niles Paul, another North graduate. He toured the NU facilities. He saw his grandpa’s name and photo in the Osborne Complex.

Trouble was, Bo Pelini’s staff never showed much interest in recruiting Brandin, nor did any other Division I school. Senior year at North High, Bryant was a 220-pound linebacker. Strong, but stiff.

Once he redshirted, built up his body and showed off his new position, Division I coaches would pursue him. That’s not quite how it happened.

In December 2011, Carl Pelini took the Florida Atlantic job and hired Sims as his recruiting coordinator.

Sims directed him to Bryant, who had zero defensive line film because he played linebacker in high school and redshirted at Fort Scott. They took a chance.

Bryant probably could’ve stayed another year in junior college and gone to a bigger program, but Florida Atlantic sold him on playing time — and the beach. He kept getting bigger and stronger, and Owl coaches moved him to defensive tackle, where last year he recorded six sacks. Sims thinks he’s a future NFL player.

Sims recalls a play last season when Bryant rushed the passer, then turned and sprinted 40 yards downfield to make a tackle. He’s a linebacker in a lineman’s body, Sims said.

“And there’s not one ounce of character flaw in him.”

Brandin was blossoming in 2013 when, in the season finale, he tore the anterior cruciate ligament in his knee. He spent nine months in rehabilitation, eyeing Aug. 30 on the calendar.

“I promised myself I wouldn’t miss the game no matter what,” Brandin said.

The injury disrupted his summer break, but not his appetite. Brandin’s last trip to Omaha was early May. He sat at Grandma’s dining room table and ate smoked turkey, barbecue beef, mac and cheese, spaghetti, corn on the cob, green beans, tuna casserole, chicken casserole...

“He ate me out of a house and a home,” Mollie says. “I just couldn’t feed that kid enough.”

She didn’t charge a dime.

Mollie skipped her morning walks this week to prepare for a Friday night party on Camden Avenue. Friends and family were flying in from all over the country. She needed to cook.

Monday afternoon she appeared stress-free, flipping through scrapbooks in the living room when she remembered a keepsake that didn’t fit on a cardboard page. Did she still have it?

She walked into a bedroom where matching red blankets and Husker pillows draped two single beds. She came out with a Nebraska coat. Is this it?

No, Robert said. We bought him that coat. I don’t think you have the old one here.

Mollie walked to the bedroom and checked again.

She appeared holding a family heirloom, a piece of Husker history. The sleeves were a little frayed, the “N” a little beat up, but it was the same letter jacket that Bruzzy wore on Nebraska road trips, the same one he wore the night Mollie first laid eyes on him.

She held it up and admired it — “Yeah, that’s his jacket.” Then she returned it to the bedroom closet.

Today a new season begins, and 63 years after he hopped in the back of a pickup truck, Charles Bryant’s descendants will retrace his route to Memorial Stadium.

The color they wear doesn’t matter.

Why Ronaldo and Mbappé's futures are inextricably linked

Why Ronaldo and Mbappé's futures are inextricably linked

Mollie Bryant and Robert Bryant, the wife and son of former Husker great Charles Bryant, look through scrapbooks containing mementos from Charles’ career. Brandin Bryant, Robert’s son, will take the field at Memorial Stadium today, but not in the NU red of his grandfather; he will be wearing the blue of Florida Atlantic.

Robert Bryant at the University of Southern Colorado 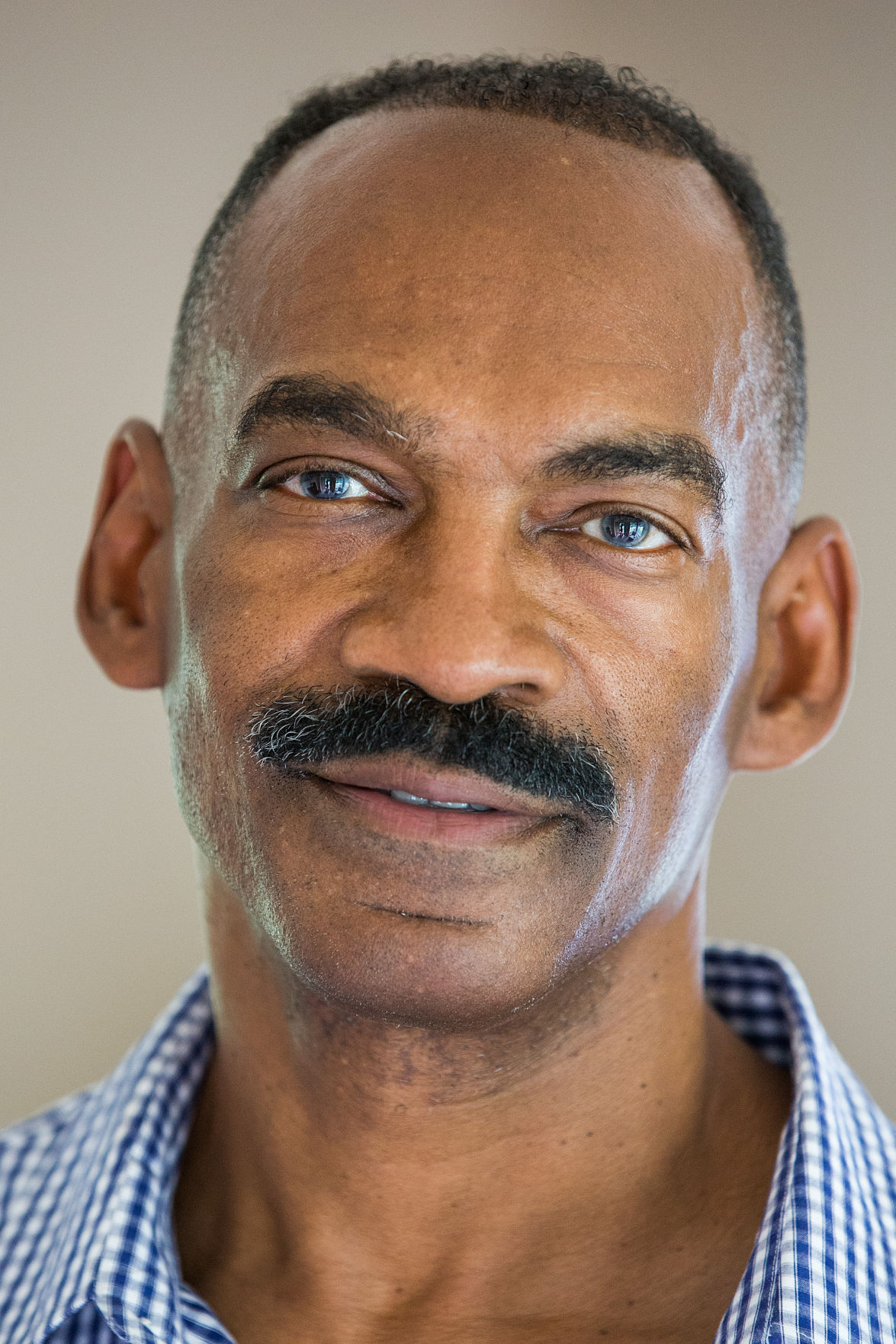 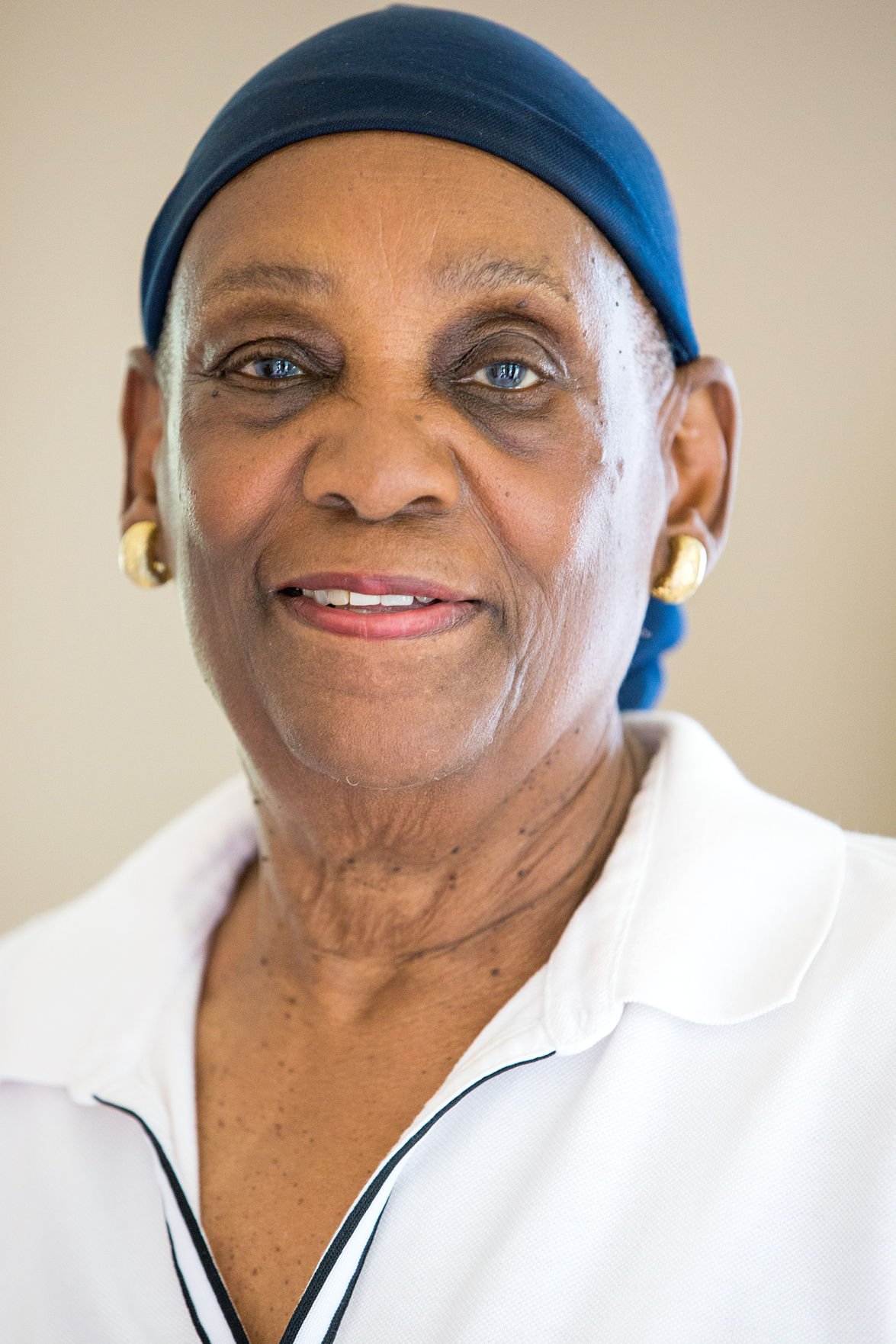 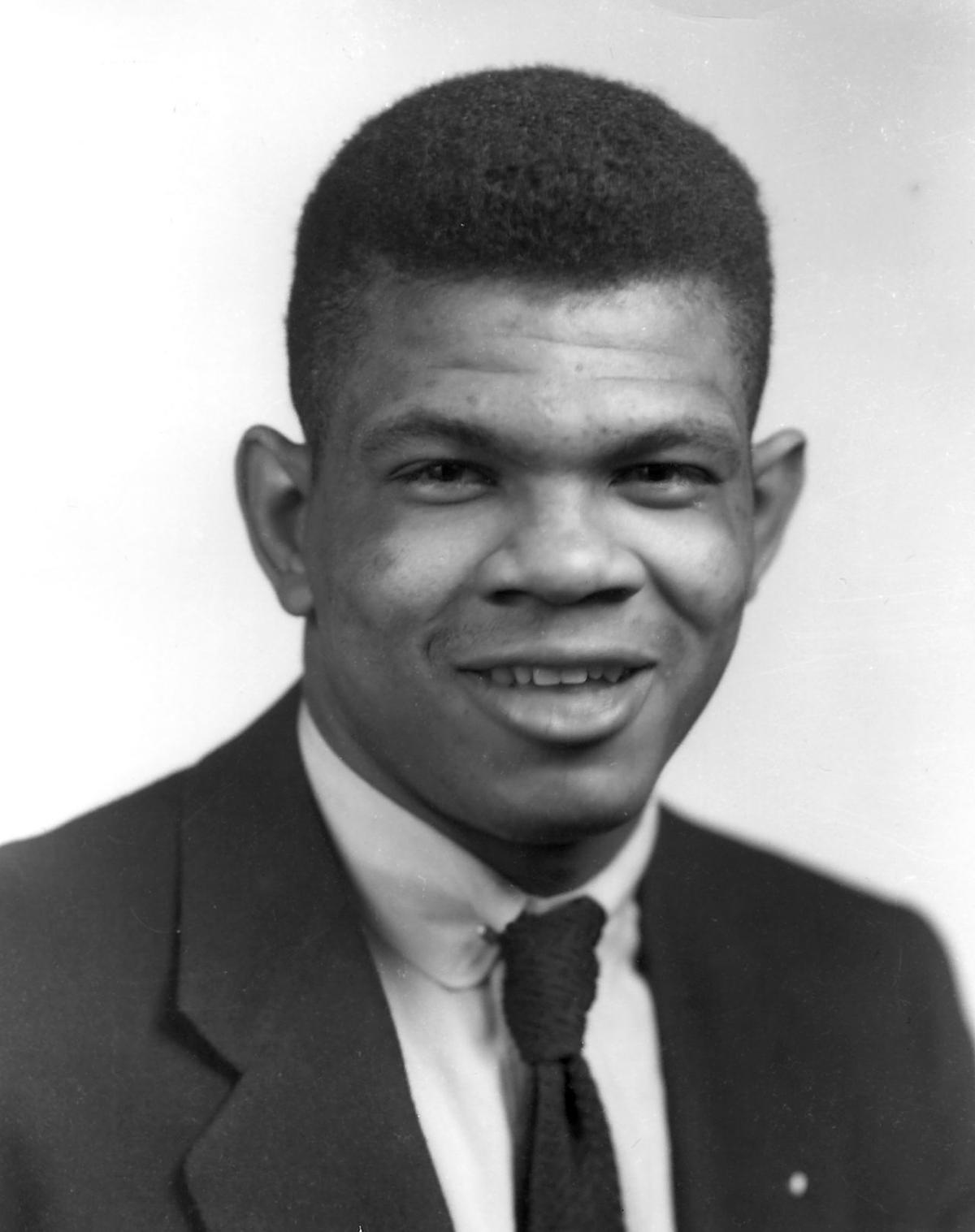 Charles Bryant joined the Huskers in 1953, before NU offered scholarships to black athletes. He got one the next year.